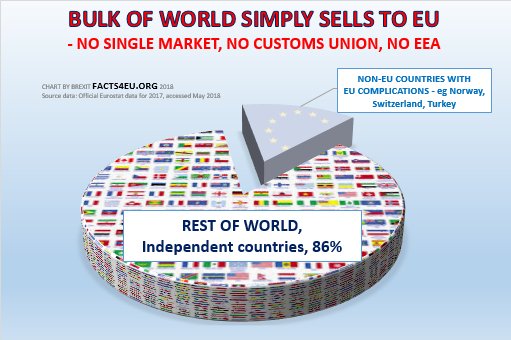 In 2017, 200 non-EU countries and states from around the world sold products to the EU worth €1.8 trillion

Where does this research come from?

Brexit Facts4EU.Org conducted research into the trade figures for 2017 from the official statistics body serving the EU Commission. Their list includes everyone from little islands to the major economies such as China and the USA. Technically some of the small islands are not countries, but they’re on the EU’s official list so we’ve included them. In order to give you a very clear picture of how easy it is to sell into the EU, we then excluded EEA and EFTA countries and those with any form of close relationship, such as Norway, Iceland, Liechtenstein, Switzerland, Turkey and others. In other words we looked at all the countries selling into the EU perfectly successfully, without EU complications.

The UK could be one of these normal, independent countries

If the vast majority of global sales into the EU come from countries which are not members of the EU’s Single Market or Customs Union, why shouldn’t the UK become one of them on 29 March next year? If 200 countries and states can do it, why can’t the United Kingdom? This is the NORMAL way of selling to the EU.

Who are the 40 top sellers?

Our list of independent countries and states manages to sell to the EU without being in the EU’s Single Market, the Customs Union, or the EEA.

Below we narrow this down to show the top 40 countries selling into the EU in 2017, without any of the complications which Remain MPs and peers wish the UK to have with the EU. 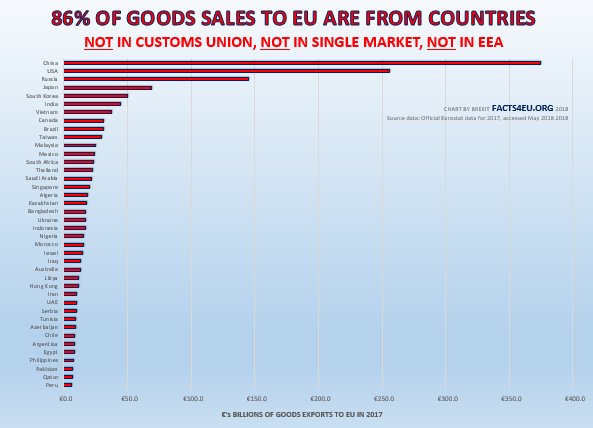 The countries above - and another 160-odd countries and states - sold to the EU last year without having to accept free movement, nor having to have their laws made in the EU, nor having to pay billions per year to the EU. They most certainly didn't have to give up their sovereignty, as Theresa May is proposing to do with her 'Withdrawal Agreement'. And yet last year they sold goods worth over €1.8 trillion euros to the EU.

Most MPs don’t have any idea about trade

It is a sad fact that MPs are standing up in the House of Commons on a daily basis, telling the British people that memberships of the EU Single Market and the EU Customs Union are essential. This Brexit Facts4EU.Org report, based on analysis of official EU data, shows clearly that this is not the case. The vast majority of sales into the EU are from normal, independent countries over whom the EU does not have the dominance and control which Theresa May is proposing to accept in her disastrous ‘Withdrawal Agreement’.