“THE EU DEAL UNMASKED: Twelve Reasons Why the UK Will Fail to Get a Canada-Style Deal” 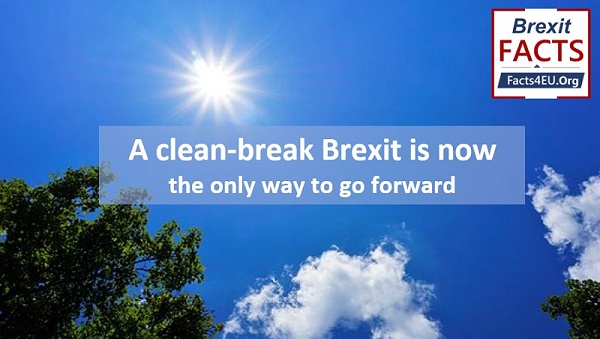 Boris Johnson’s hope of securing a Canada-style free trade deal with the EU are set to be dashed, according to a detailed analysis of the UK-EU negotiations that are supposed to be completed by Thursday this coming week (15 Oct 2020).

The paper concludes that in a dozen key areas the UK is worryingly on track to strike an agreement with Brussels that falls far short of the CETA deal that the EU reached with Canada just four years ago. (Still not ratified by EU member state governments.)

The major stumbling block is that the UK has already agreed a Withdrawal Agreement and an associated Northern Ireland Protocol with the EU that makes it near impossible for it now to achieve a future relationship on a par with the freedoms and normal trade terms granted in the Canadian deal.

This Withdrawal Agreement and subsequent Treaty must therefore now be nullified. 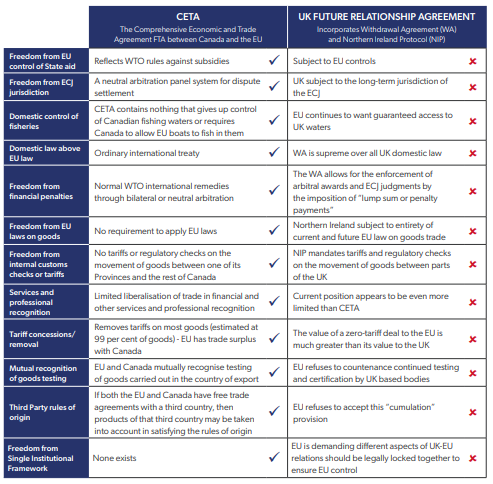 “A genuine Canada-style deal for the UK would be a great result. This paper goes through the fine print to demonstrate that we are on the brink of signing up to the kind of deal a colony of the EU would be ashamed of.”

Readers can download the full (18 page) paper here and we recommend it, as it expands on the points made in the summary above. 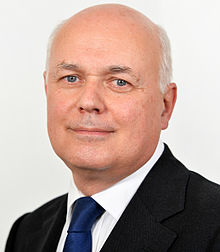 This paper from the CBP is focused on the impossibility of the UK achieving a Canada-style free trade agreement with the EU. After nearly 50 years of membership of the EEC/EU this is the absolute minimum that the UK deserves from the EU.

As readers know, the EU refuses to offer any such deal and the current arrangements will make the UK into a colony of the EU, subject to its ECJ rulings and many other ‘slave state’ conditions, for decades to come. The only reasonable conclusion to draw and action to take is to repudiate the Withdrawal Treaty on the grounds that the EU has never acted in good faith during the past four years.

At Brexit Facts4EU.Org this has always been our position from the moment the first draft of the Withdrawal Agreement (WA) was published by Theresa May’s Government. We slammed it then, and were the first media outlet to do so.

The revision to the Northern Ireland Protocol achieved by Boris Johnson late last year was nowhere near enough to make the WA acceptable to any country professing to want to “take back control” and to be free, sovereign, and independent. In September 2019 we published a warning one-pager for Boris Johnson. On 18 October 2019, the day after publication of his amended WA, we published a simple 10-point one-pager, entitled “Forget politics, is Boris’s new EU treaty Brexit? No, it’s not.”

Since the appointment of Lord Frost as the UK’s Chief Negotiator we have welcomed the robustness of the UK Government’s approach to Brussels. Now is the time to repudiate the abomination that is the Withdrawal Treaty.

The EU will clearly not accept that the UK voted to leave the EU in order to become and independent country.

We continue to lobby for the following:-

To all MPs who read our work, as the most prolific researcher and publisher of Brexit facts in the world we stand ready to assist in any way for the achievement of the above objectives.

Finally, and to all members of the public reading this, please help us to keep going in these critical times. We don't have foreign billionaires funding our work, (like some Remain campaigns), we rely on public donations. These all go to keeping us working seven days a week as we have done for almost five years. Please make a quick, secure, and confidential donation using one of the links below this article. You will receive a warm and friendly email from a member of our team. Thank you very much.

[ Sources: The CBP | Previous publications by Brexit Facts4EU.Org ] Politicians and journalists can contact us for details, as ever.

There's no mention by the government of repudiating the withdrawal agreement/treaty. I've always agreed with you on this, but where's the action? Or even the threat?

Why isn't this on the BBC?

The withdrawal agreement and ensuing negotiations have turned out to be 'a pig in a poke'. If Boris Johnson buys it his Premiership will be short-lived.
That Canada a member of the Commonwealth can get a better trade deal than the UK, its leader is unspeakable.
Johnson keeps referring to Winston Churchill, but, unfortunately for him he is turning out to be NO STATESMAN.
Coronavirus is proving a testing time for all Governments, get rid of the EU problem by just leaving on WTO. Trade and further negotiations on better terms will follow.

Agree 4 Sydney Ashurst-Of course we should now leave on a NO deal basis and is so doing close the BBC- they have been out and out traitors of this nation for years and never more than after this nation voted to leave the EU. Just recall the look on the face of David Dimbely when he had to announce the Leave Vote! BBc no longer what it once was.

Walk, Walk Now, Walk Quickly and Do NOT Look Back!
What a Great Day That WOULD BE! 👍🏻

Who is going to pull the plug, not the EU, Just look at their history of decision making, they go to the eleventh hour and sometimes beyond and then come up with a fudge.
Their un-elected officials behave like orientals they cannot be seen to losing face. They have backed down on their threats and will go to the final hour in the hope that Johnson will buckle like he did over the WA.
The Conservative MP's and Party need to put some backbone into their man. Its too late to ditch him.

Important article by John Redwood yesterday on 'Build Back Better'
Extract: '...It is a systematic agenda and way of thinking that infuses most global institutions and many governments or main Oppositions in leading countries. What Joe Biden says is similar to the EU programme which is reflected in the IMF’s statements, the views of the World Economic Forum, the World Health Organisation, the UN, the G7 and many others. The members of a numerous well paid and much travelled global elite reinforce the same consensus everywhere they go. Some are senior elected politicians leading governments who need not accept this way of thinking if they did not agree with it....'
https://johnredwoodsdiary.c...
-
It seems that Sir John, amongst other things, is here suggesting that Johnson, and our government, by standing in front of the Tory Party Conference with the slogan 'Build Back Better' and giving a speech on wind farm energy, is labelling Johnson as a 'globalist' and part of the globalist agenda for a New World Order. Thus he is in favour of internationalist, unaccountable large-block government, such as the EU and China; and not in favour of small Nation States.
-
We still have a 'Remainer' Prime Minister, and a Remainer government leading our Brexit negotiations.
As with May, by xmas we will have been betrayed - another BRINO.
Get rid of Johnson; and let's leave NOW.

I still think we will leave the EU on WTO terms,all be it by default. I foresee the UK and EU cobbling a trade deal together, not the Canada deal the UK is seeking.There will be a compromise on fishing access,the French will vote down the deal in the EU Parliament because they want more. There will be no time left to negotiate anything else and we will have left. Lots of screeching from Remainers and the BBC but the UK will survive.Other countries rush in to our lucrative market to supply goods to the UK.The EU Commission smugly say to remaining 27 countries "see thats what happens when you leave us".Meanwhile in the real world thousands of EU citizens lose their jobs for ever, as the goods they produced for the UK market are supplied from other non EU countries cheaper, because of no tariffs.With rising financial pressures on the Euro,rising unemployment,increasing contributions to the EU Commission to make up for the UK leaving, and diminishing markets for exports other EU countries contemplate leaving on mass.That is how trade in a free market between nation states should work,supply and demand,minimum regulation.The only fly in the ointment is the Withdrawal Agreement,and that the EU will annex Northern Ireland.Lots of lucrative work for lawyers!

We only have until the 15th Oct don’t we then it’s too late to do any deals in Time forJan 2021.
Hope that’s not their plan to try to delay talks again😡