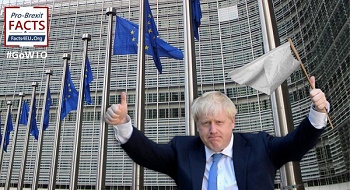 Brexit Facts4EU.Org reviews ‘May Mk2’ with the advice of a Brussels-based barrister

While most of the media continues to be obsessed by the internal politics of Brexit, we look at the basic facts of what the Government wants MPs – and therefore the British people – to sign up to.

We have focused purely on all the NON NORTHERN IRELAND issues which have not changed and which make this treaty unacceptable, regardless of the amendments secured to the Backstop.

What follows is a short summary of the continued imposition by the EU of an unacceptable denial of freedoms to an independent UK. Our summary has been prepared with significant input by a Brussels-based barrister. If passed by Parliament tomorrow, all of it will apply to the UK on 01 November 2019 and significant parts will apply even after the end of the Transition Period, supposedly on 01 Jan 2022 but more likely to be in many years’ time.

Prepared by Brexit Facts4EU.Org with advice from a Brussels-based barrister

3. No trade deal with EU – Not included as this is just a divorce treaty. Any EU trade deal must ensure “a level playing field for open and fair competition” and “deep regulatory and customs cooperation”. This will make it difficult for the UK to reduce non-tariff barriers in trade deals with USA, Australia, China, etc. [PD paras 17 & 21]

6. Prevents independent military action – UK permanently stopped from taking “any action likely to conflict with or impede” EU’s foreign policies. Critical parts of section on foreign policy and security are not reciprocal, eg future relationship will not “prejudice the decision-making autonomy of the EU” but no such language for UK – only permitted to “maintain the right to determine how [to respond] to any invitation to participate in operations or missions”. Also, parties “agree to consider” security collaboration in European Defence Agency, European Defence Fund, and PESCO “to the extent possible under [EU law]” which is prescriptive (not permissive) obligation. Despite paying for European Defence Agency during transition, British troops in EU battlegroups will not be led by British staff officers. [WA articles 129(6-7) and 156-157, PD paras 99, 102(c)]

7. Controls UK fishing – Common Fisheries Policy continues in UK waters during transition (which can be extended) but UK will have no say in implementation or enforcement. After transition, Political Declaration requires “cooperation on... regulation of fisheries, in a non-discriminatory manner” - code for continuing current arrangements for EU access to UK waters. Any trade deal to “ensure service providers and investors are treated in a non-discriminatory manner, including with regard to establishment” - prevents UK protecting quotas from EU purchase. [PD paras 29 and 72]

8. Replaces one EU Commission with another - New body established with “powers equivalent to those of the European Commission”. UK must accept exclusive jurisdiction of Arbitration Panel and judgments of ECJ. Grants EU officials criminal immunity and exemption from UK tax. Imposes gagging order on UK which must keep all EU information confidential but EU can use UK information as it sees fit. [WA articles 74, 101, 104-5, 106-116, 159, 168, 174]

10. EU colonisation - makes UK bystander in laws that govern it - UK permitted to send civil servant to Brussels to observe EU passing laws designed to disadvantage UK economy during transition which might last many years. EU could regulate London’s huge foreign exchange markets, impose financial transaction tax that would be collected at UK expense by HMRC but sent to foreign governments. [WA article 34]

This factsheet is available to download as one of our famous ‘one-pagers’. Unlike our recent one-pagers in the ‘Brexit Fightback Initiative’, this is not yet endorsed by any other Brexit groups. There simply wasn’t time, as we had to work through the night to get this out.

In our piece above we have deliberately ignored all Westminster political considerations. Readers can read about these to their hearts’ content in any newspaper, or watch politicians, journalists and pundits on the BBC, ITN or Sky News.

Instead we have produced a one-pager for MPs and the public which asks serious questions about the EU Withdrawal Treaty being put to Parliament tomorrow by the Prime Minister.

The questions raised have not fundamentally changed since our initial assessments of Mrs May’s appalling ‘Withdrawal Agreement’, which was rejected three times by Parliament. Yes, the provisions of the Backstop have changed, and yes, the Political Declaration now contains an aspiration for a free trade agreement with the EU which does not eactly mirror EU membership.

Nonetheless – and as we predicted many times – the Boris Johnson Government has not found it possible to tear up Mrs May’s ‘deal’ and negotiate a sensible departure agreement with the EU.

Whether the application of some sticking plasters to what is in effect the EU’s colonisation treaty for the UK will be enough to persuade MPs to vote for it tomorrow is unclear. All we have done is try to ensure they have some understanding of what they will be voting for.

If you value this work, please, please make a donation today so that we can keep going. Quick and secure donation methods are below.

[ Sources: EU Council Withdrawal Agreement and Political Declaration (amended yesterday) | Brussels-based barrister ] Politicians and journalists can contact us for details, as ever.

You don't need to read the details, you only have o see all the smug EU faces: Juncker, Macron....

Boris turned on the light and what was revealed - the ghost of Theresa May.
The outcome will be the same - rejection. The media can never get right.

Thank you BrexitFacts4EU team. Exactly what is needed - facts!
-
I shall email this off to the 'Spartans' so that there can be no pretence that they do not know what they are voting for.
-
If they vote for this we all know that they are putting their careers and party ahead of the interests of the country.

Your analysis has also been confirmed by The Bruge Group's legal assessment. Thank you. BRINO it is.
My second referendum question, if we have to vote again:
Should the UK leave the EU and all its institutions OR Should the UK pass the EU Withdrawal Agreement.
Remain is off the ballot paper as that option was rejected in 2016.

Thank you for pointing out, yet again, the REST of a legally binding Treaty and hand-binding PD that the Govt and any MPs agreeing to it want to deceive the electorate with, by only focusing on the one (though important) solitary changed item in the Treaty, itself rejected by NI MPs, as a distraction - like street con artists. Sprinkling glitter on a polished turd (Boris's words from Chequers) still leaves a turd. Is it good for the UK? The smug smiles from those in the EU tell you that it isn't.
What could we have expected? Boris has a pro-EU (remain) dominant Cabinet. All bar two have previously voted for EU subservience, including Boris & JRM. We now hear noises that those who have overtly acted against this country on behalf of a foreign power may well be readmitted to the party.
'Getting Brexit done' may be the claim but it is NOT what was voted for - LEAVING the EU.
There have been 39 clear months between the referendum in June 2016 and today, so we have already paid £39bn, at £1bn per month to the EU. Didn't May state that it was mainly made up of our contributions until we left? If so, why does this figure still exist?
Quite simply, a 'transition' means that we will not have left. It's kicking the can down the road, continuing the uncertainty for business & also the fantasy of those working for the EU to overturn democracy. I have no doubt that they will attempt to destroy our economy.
Where is the return of our territorial waters on 1st November? Why will we be asking for a 'better share' of what's ours in the first place?
We have seen that May has tied us to the military union, which still happens if we leave without a WA. Still silence.

As for the other 'alignments', this just means that MPs are sub-contracting their jobs to a foreign power to absolve themselves of responsibility. It is THEIR JOB to make laws to protect workers, the environment etc. If the electorate disagree, or think that they are over-reaching their powers, they get voted out and things can be 'fixed'. Why give this to a foreign power over which we have no say? We've all seen that the EU can seriously impact areas of our life that we had a veto (& seemingly control) on simply by changing an area that they DO control. It's the EU way. Never have so many of our MPs shown that they simply don't want the responsibility that they were elected for.
This merry-go-round of smoke and mirrors continues. Even if we manage to leave without a WA, Boris will not get the super bounce he was expecting as all this demonstrates is that in their tiny, Westminster bubble minds they think that it will go back to 'normal'. With a few honourable exceptions on both sides of the House, they have shown that they lack honesty & integrity & would be willing to sell out their country for a few more beans. What a disgrace the majority of them are. Carry on troughing seems the name of the game.

Has this summary been sent to all MPs and newspaper editors?

This article is winging its way to Boris and Jacob Rees-Mogg - do they think we are all ignorant, uninformed mugs? And yes, Remain Central (The Times), The Telegraph, Mail, Express, et al. Will also enlighten the Freedom Association, of which I am a member and which seems to be broadly, if reluctantly, in favour.

Thank you for this, I was suspicious about what was NOT being said - and your summary again confirms my worries.
My fervent hope is that this re-hash is part of a 'cunning plan' to get parliament to vote it down to circumvent the surrender act and end up with no deal - but I'm not too sure it's a very high stakes game.