Real “overseas aid”? The UK is No.2 donor in the world after the USA, not Germany 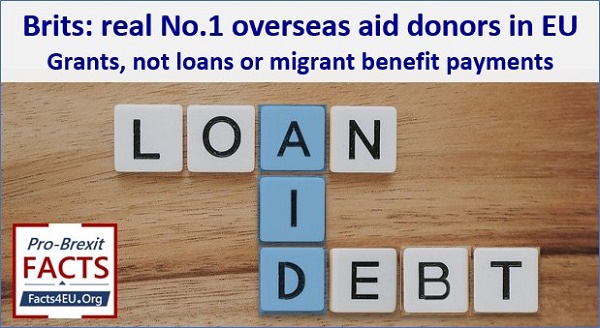 On Thursday in Brussels the EU Commission’s official statistics agency released the preliminary flash estimate of GDP across the EU27 in the first quarter of this year.

In Part One of our expose of the EU aid scandal we showed how the EU wrongly claimed to be “The world's leading donor of Official Development Assistance (ODA)”. According to the official figures from the OECD – the official body which monitors and manages such matters - the EU is FIFTH, not first, on the list of leading donors of aid.

This is not a marginal error on the part of the EU’s propaganda machine based in Brussels. It is a deliberate deception which has been going on for years.

The deception of the public is even worse

On Thursday we gave the OECD’s official numbers for top aid donors for 2019, which showed that the USA is No. 1, Germany is No.2, and the UK is No.3.

If, however, a more common definition of overseas aid is used, the reality is different. For one thing, the United Kingdom jumps into second place. Here’s the real picture – if loans and monies spent internally in the donor’s own country are removed:-

Who includes the most loans instead of actual grants? 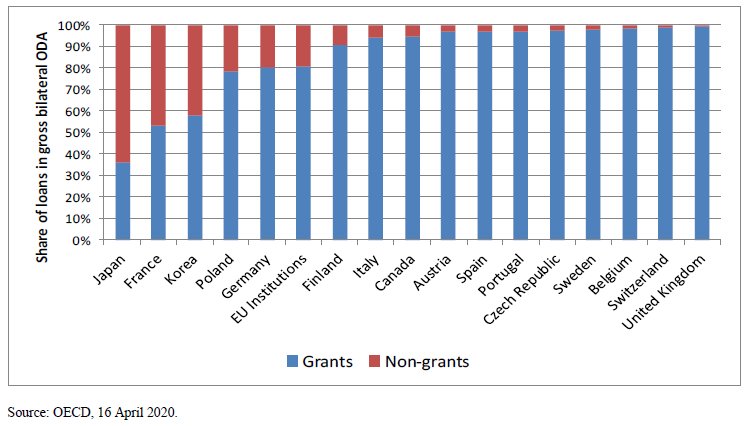 What about countries which inflate their figures
with monies they spend on migrants in their own country?

Below we show the reality of “overseas aid” if you strip out loans (not gifts of aid) to poor countries and if you also strip out monies which a donor country spends in-house on its migrants. In other words, we are showing a closer picture of what “overseas aid” really looks like. 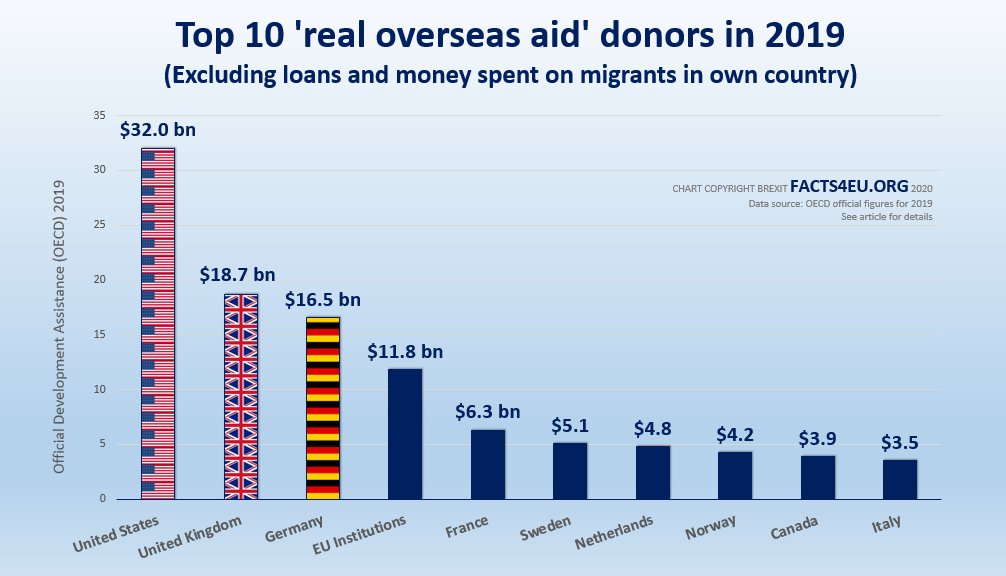 What do most people consider to be aid?

For most people, aid is money given to a poorer, developing country. Indeed the OECD’s definition is “government aid that promotes and specifically targets the economic development and welfare of developing countries”. In recent years ‘foreign aid’ or ‘overseas aid’ has been renamed as ‘Official Development Assistance’ (ODA).

Perhaps when most people think of foreign aid they think of something like this :- 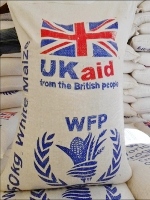 For years the Brexit Facts4EU.Org team has been showing up the EU for its false claims of being the “world’s no.1 donor” of aid. We have also exposed the scandal of billions being claimed by certain countries as “aid” when in fact it is spent internally as a part of its welfare system.

We condense days and often weeks of research into short- punchy articles which ordinary people, MPs, and journalists read. Sometimes condensing the information to make it accessible to all can take as long as the research itself.

Our work does get picked up by the national media, as regular readers will know. We could do so much more to promote our work to the mainstream media if we only had more resource.

If you believe in free speech and if you believe that the public needs to be aware of more information like this, please make a donation to us today. Quick and secure methods are below and you will receive a friendly ‘thank you’ email from a member of our team. We really appreciate anything you can give to keep us fighting for a free and independent United Kingdom. Thank you so much.

[ Sources: OECD | EU Commission | DFID ] Politicians and journalists can contact us for details, as ever.

The EU was always good at claiming credit for achievements of member countries and at the same time quick to single out and blame member countries should they do anything 'undesirable'. Like a bad head master. This might be just one of the reasons why there's no (and never will be) real unity. It's certainly not wise leadership.

Elena, as you said that's just one of the reasons, there are plenty more to choose from!

I wouldn't expect anything else from the EU.

Spend all that money abroad yet let people go without homes and food in the UK.i bet most the money never reaches those in need abroad either.most will go to greedy people who will keep it for themselves and in turn grease the palm of greedy people in the UK who send them the peoples money in the first place under the guise of charity.

Comment 4 - Alex R - that sums it up pretty well! Yet another scandal form our bungling Government and yet more deceit, mismanagement and misappropriation of public funds - our money!