Last year the UK gave the EU $2.3bn of aid money, for them to rebrand it as theirs 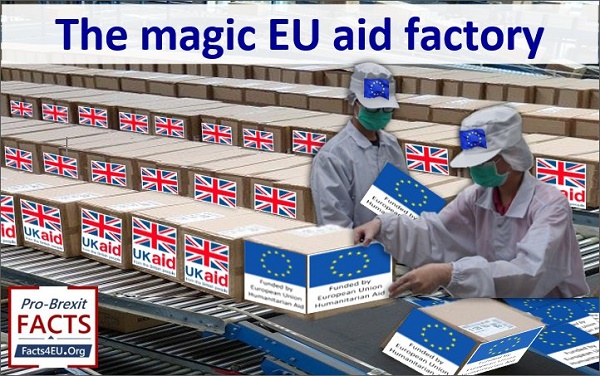 The EU claims to be the World No.1 Donor but the official body (OECD) says it is FIFTH

Part One of a two-part Brexit Facts4EU.Org investigation and report

For years the EU has been lying about its achievements in the area of what most people still call “overseas aid”. The official term now is “Official Development Assistance” (ODA). In the EU’s latest propaganda sheet for 2019 the EU has continued to misrepresent facts in a grotesque fashion.

Each year Brexit Facts4EU.Org calls out the EU on this, and each year the EU Commission continues to produce blatant and highly-misleading propaganda in an attempt to present themselves as something they are not. The BBC has remained silent on this scandal, despite the clear evidence.

In this summary of the latest official 2019 aid figures, we once again expose the EU’s propaganda for what it is. The OECD is the offical arbiter of overseas aid so we have quoted from them and used their data, as well as using the EU's information as a comparison.

This is not and has never been true, and yet the EU has been claiming this for years

It is the OECD that decides these things, and the EU is in FIFTH place 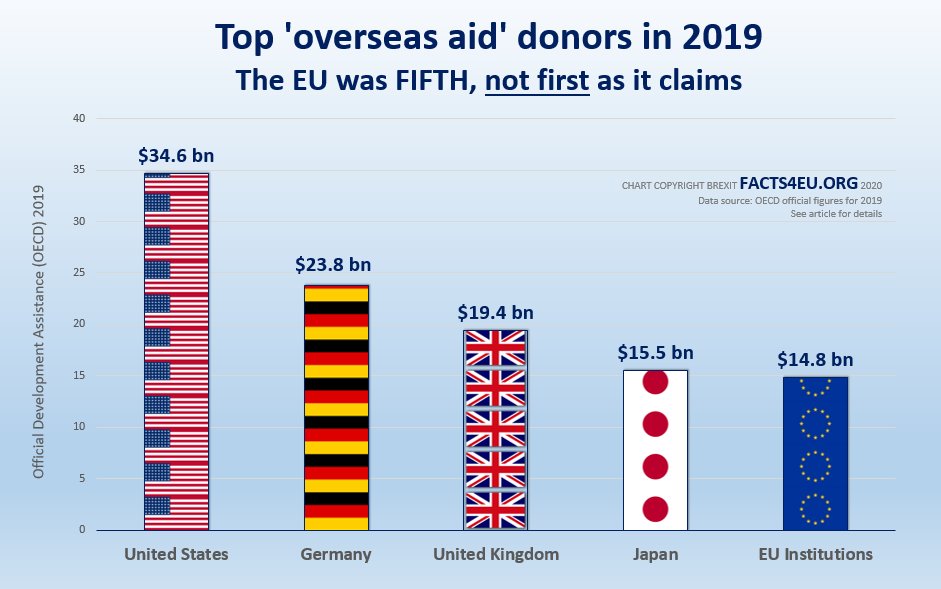 This is the EU as purveyor of fake news

The EU should simply report its own donations from its own donor programme. Even that might be argued to be disingenuous, as the European Union is not a country and the money it donates comes from the individual member states.

Instead the EU takes the amounts which its individual members donate individually, it then adds them to monies collated and distributed by the EU institutions, and then claims the whole lot as ‘EU donations’. 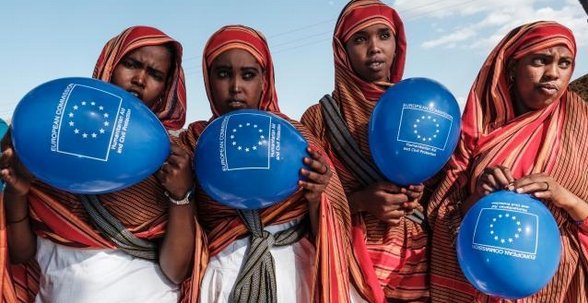 What is “Official Development Assistance” (ODA)?

Defined since 1969 as “government aid that promotes and specifically targets the economic development and welfare of developing countries”, in recent years ‘foreign aid’ or ‘overseas aid’ has been redefined as “Official Development Assistance” (ODA).

The body adjudicating and monitoring this aid is the OECD based in Paris - a body which took an anti-Brexit position back in 2016 and subsequently. The OECD has a minimum target of 0.7% of GDP for Official Development Assistance. The United Kingdom has for many years been the only major EU economy to meet this target.

Each year the UK gives billions to the EU for official EU budget contributions and also for "off-budget" EU funds about which we have reported many times. Last year (2019) the UK gave $2.32 billion of this to the EU’s foreign aid programme, on top of what the UK gives unilaterally to poorer nations around the world. These are official OECD figures.

It all adds up to the 0.7% of GDP which the UK now gives each year in foreign aid.

When the UK Government via the responsible department DFID gives taxpayers’ money to the EU,
here is what happens to it.

$2.3 billion is suddenly transformed from “UK Aid” into “Funded by the EU Humanitarian Aid” 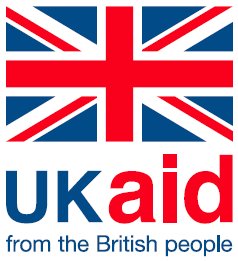 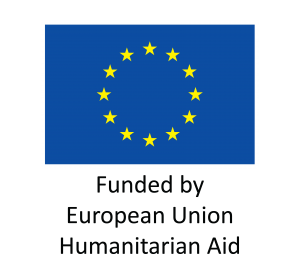 The EU’s propaganda continues to be a disgrace, and it’s getting worse year by year and decade by decade.

Over the last few years we have published a significant amount of evidence showing how the EU has grossly misrepresented itself (putting it mildly) on the subject of overseas aid, to say nothing of all the other propaganda sheets on other subjects pumped out by the EU Commission.

In our opinion it is high time that the BBC and other broadcast media in the UK covered this story. Why should we continue to have to do their job for them?

If this isn’t ‘fake news’ from the EU, what is? If a commercial company produced advertising leaflets such as the ones the EU Commission regularly produces, they would be subject to all manner of legal actions from the authorities. We see no reason that the EU Commission should be exempt from these standards.

In this case the official body responsible for monitoring Official Development Assistance – the Europhile OECD based in Paris – flatly contradicts the EU’s latest propaganda sheet. We have checked all the figures and the OECD is correct, as would be expected.

We trust that the mainstream media will want to call this out and we are happy to help with our five years of research into this area.

Is it finally time to re-evaluate the UK’s generosity to the EU and to the world?

Firstly, we hope that the Government Dept responsible for overseas aid (DFID) is rapidly moving to stop all payments of this kind to the EU. Huge amounts go to the EU from DFID each year, only for the British people’s generosity to be re-badged by the EU as “EU humanitarian aid” when it arrives in the recipient countries.

Secondly, we hope there is currently a major re-evaluation of the UK’s foreign aid programme underway. We generally prefer not to single out individual countries, but the UK is continuing to give ‘development’ aid to India – a country whose economy is now larger than the UK’s and a country which even has its own space programme. Surely this aid must be stopped immediately?

Thirdly and above all, we would like to see a very strong statement from Mr David Frost and his team of Brexit trade negotiators that the UK will make its own decisions going forward, regarding British generosity towards poor and developing nations. These decisions should be made without any reference to the EU, and without UK aid being re-badged by the EU any longer.

On the subject of donations to poor people, could we ask readers who have not yet donated to make a donation to our team today? We don’t have luxury London offices, nor secretaries, nor expense accounts. We rely on ordinary people like you, dear reader, to keep us in the fight for freedom of speech and to achieve a free and independent United Kingdom by 31 Dec 2020.

All donations are confidential unless you tell us otherwise, and you’ll receive a nice ‘thank you’ email from a member of our team. Thank you so much.

[ Sources: OECD | EU Commission | DFID ] Politicians and journalists can contact us for details, as ever.

Those four women in the picture don’t look overly happy with the balloons they got from the EU, filled with hot air…

It will be such a happy day when the eu is in the bin of history.

This has gone for years. Road finance by EU funding are in fact funded by are own contributions! This is pure propaganda for the gullible and it has fooled nearly half the voting public across the EU! Boris must end all foreign aid paid to the EU and replace the rest with free trade deals so countries can trade their way out of poverty! Aid is just benefit dependency under another name! Whilst Britain was forced to desert the commonwealth by EU membership. The EU has kept these countries under control with this foreign aid! This is classic EU tactics as it controls poorer member states with farm subsidies. They are now dependent as their economies will collapse if it stops. This is why Britains contributions to the EU are why we hold all the cards in negotiations!

Thieves no other word to describe them.

This lot is a disgrace and should be stopped immediately.
Is there know way that we could get some lawyers to delve into this.
As its total fraud

Life at the top of the pile must be lovely,
No wonder they want us to stay in.

Something else that the British are not allowed to feel pride for. Divided by the seeds of discord since time immoral, though not quite conquered. Sold out from within. Lions led by thieves. Until now, unless otherwise proven, we seem to have a leader in boris who seems to be leading us to our birthright. We as a nation have laid enough sacrifice upon the alter of freedom and justice to feel no shame the fact of our heritage and traditions. Anybody who denigrates our history has a clear agenda. I feel privileged to call myself an englishman regardless of the unrelenting properganda. The only part of of the British history that has shame belongs to the so called elite. Odly enough some of whom seem to have driven us headlong into the federalist EU. The greatest gift we can give to yourself is awareness.

People like remoaners need to realise that the EU has no money!! it leeches off it's member states! after all it makes sense to them to pay to trade freely with their neighbours.

To see people coerced into venerating and extolling this silly corporate logo is sickening.

The EU is very adept with self promotion propaganda to try and justify its existence and usefulness. The EU is nothing more than a bureaucratic parasite.