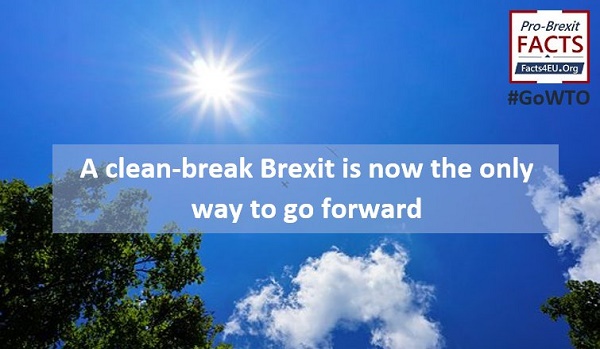 Below is the unequivocal statement of eight Brexit organisations regarding any attempt to re-present Mrs May’s Withdrawal Agreement, minus the Backstop.

This sets out in the clearest terms yet published why the Prime Minister was right when he described this agreement as “dead”.

If eight Brexit groups - each with their own particular expertise, special interests, and readerships - can come together to back a statement like this then we feel the Government will want to listen.

Readers may also download this document as a one-page PDF, for use as leaflets

No taking back control

No trade deals, a continuation of the trade deficit, and continuing to subsidise the EU27

This is not Brexit in any way, shape, or form, and doesn’t even give us a trade deal

The UK will not be a truly sovereign nation until we leave the EU completely.
A clean-break Brexit is now the only way to go forward.

© logos are copyright of each organisation

For more about this exciting new Brexit initiative, see our launch article here.

At the request of politicians we have included references to the clauses in the current ‘Withdrawal Agreement’.

These are therefore not bald statements – they are backed by facts. Most MPs have clearly not read Mrs May’s Withdrawal Agreement. We have, which is why we have been able to demolish it so emphatically.

We state again: This is no basis for the departure of the UK from membership of the European Union.

Will you support this campaign?

Brexit Facts4U.Org are embarking on an initiative to spread this far and wide, using the social media, directly to the press, and directly to MPs. We hope that readers will get behind this initiative starting now, and continuing as we produce more material in the coming days and weeks.

Finally, if you like what we are doing, please remember that something like this takes far more time than it looks. We really need readers to donate so that we can drive this thing with maximum effort. We hope you can contribute today. Quick and secure donation methods are below. Thank you.

[ Sources: Eu Commission ] Politicians and journalists can contact us for details, as ever.

This was the case 3 and a bit years ago!!!! After the referendum vote, we should have left within a week. All the debates and deals or non-deals would have to be made then.
Instead we have allowed a constitutional crisis to emerge because of the unwillingness of the remoanians to accept defeat, after all the simple fact is that Remain lost that vote. However remoanians have thrown democracy to the toilet.
If the remoanians are correct (which they are not), we should have the right to overturn all elections going back to Harold Wilson - just because the Conservatives lost those elections. We should overturn the Queen, because some don't like her seems to be the idea of some people. Where is all this crap going to end?

The 12 point leaflet is an excellent summary:
Readers should note that it takes about 1 hour to deliver 100 leaflets.
If you can afford it, then thicker paper/card is easier to put through letterboxes.
Let's get this information out there!

An excellent summary. The listed article references clearly demonstrate the traps of EU 'control' hooks are littered throughout the surrender document & that just removing the 'backstop' still leaves it as a polished turd but this time with lipstick. It is still a turd.
The surrender document cedes the very controls that we voted to regain from the EU. Boris & co need to recognise this, as the people will certainly see such an act (a rehashed WA) for exactly what it is. This will also apply to the much vaunted 'new deal' that we're told is coming. Any pre-leave 'deal' is only related to how much control the EU will retain. The ONLY way to honour the referendum result, which was to LEAVE the EU, is a clean exit meaning the total removal of EU cancer. Then, negotiate a trade deal. We are watching for betrayal. Trust has gone. The vote was to LEAVE.

Present UK Prime Minister Johnson should by now realise every Leave voter (and many remain voters) will see through the establishment spin, just as we did pre-referendum. The problem is where those elected MPs refuse to get fully behind OUR country because we didn't vote the way THEY wanted - which was a shock for them.
Who on earth do these remoaner MPs think they're trying to kid - or to deceive as I prefer to say?
The Libdem leader was quite correct when she said this isn't a game, as she hypnotised her equally anti-democratic MPs and conference members. When Ms Swinson then mentioned there would be medicine and food shortages, I have to say, those were the words coming out of the mouth of a desperate MP (in a similar way to the unbelievable threats the electorate received from former Chancellor Osborne).
When MPs and others go to the extreme of all extremes by suggesting people will die (because we voted Brexit), we then realise those MPs are not fit to represent the people of our great country, let alone to legislate?
Boris should perhaps consider this - If it wasn't for Nigel Farage, he would probably not be Prime Minister today. In that sense, he owes Nigel a debt of gratitude and should accept Nigel's offer of help from the Brexit Party to get us out of the EU with a clean Brexit, as anything else is not leaving the European Union as shown in the above article.
The majority electorate voted to "Leave the European Union" as on the ballot paper, NOT stay half in half out.
When MPs fail to accept a clear instruction from their 'bosses' (the electorate), they should do the decent thing and stand down.
By way of transparency, I will be voting for the Brexit Party should their candidate stand in my constituency, because Wales voted to LEAVE.

Brilliant! Have started printing off already and thinking of best methods of delivery as well as letterbox. Will send to Steve Baker and ask for his help. Sending to Boris today also. Got to go …..

Boris cannot find a way past the backstop, whatever he proposes Barnier will say it is unacceptable.
Boris cannot be held in contempt for not requesting an extension that does not reopen the WA, a necessity of the Benn Act.
Parliament is a shambles.
I consigned the referendum to antiquity (1916), it certainly seems like forever since we voted.

Why is it there are so many annoying 'Scottish' in the UK parliament? I thought they had their own parliament?

@concerned.
Because they want to get as much as they can out of england.that's also why they want to stay in the EU to keep england weak. Why do you think the Scots get extra bank holidays and free
Prescriptions. I do overall love the Scots though as the vast majority are great people and our brothers.