What really is Brexit? What did the vote mean to you? 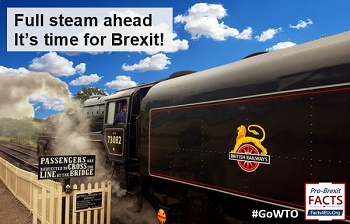 “Remain or Leave in the minds of ordinary people”

As part of our Brexit Fightback Initiative, Brexit Facts4EU.Org is pleased to announce that once again some great Brexit organisations have come together to endorse the third factsheet in the series.

This one-pager looks at the fundamental question of what Leave means.
You can now download this information as a simple, one-page PDF leaflet
or you can read it below.
We hope you find it useful

What really is Brexit?

Before the vote, all sides agreed publicly – many times – that the result of the EU Referendum would be implemented. It was a binary choice – Remain or Leave.

A Leave vote meant leaving the EU, its institutions, its Single Market, its Customs Union, all its tens of thousands of laws, its jurisdiction by a foreign power, its demands for vast annual payments, its Defence Union, its Common Agricultural and Fishery Policies, etc. It was to be a once in a generation decision. The then Prime Minister, David Cameron, even said Article 50 would be triggered the next day.

After the vote, everyone – even the LibDems – agreed to honour and implement the result. Below is a summary of what was understood by all sides. What follows really is Brexit.

A “what does Brexit mean?” summary

For Brexit to mean anything, the UK must be able to act as an independent country in all respects, with all the power this brings. This means exiting all EU structures and controls. These must NOT be replaced with anything which has broadly the same effect as being a Member State – but with no say.

The UK should offer a generous free trade deal to the EU, with zero tariffs, and with both sides maintaining their usual cooperation on security and intelligence matters.

A fully free, independent, and sovereign United Kingdom for the people.

Now THAT is Brexit 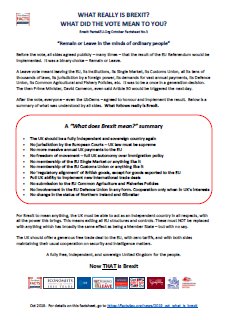 Further action: This factsheet follows on from the first two in the ‘Brexit Fightback Initiative’. More factsheets are coming, with several of them nearing completion. In the meantime we hope that readers will do everything they can to promote them.

Next article: Summary page for easy access to all factsheets to date.

One-pagers like this take far more time to produce than they look. Perhaps this is why they are so rare. They ARE, however, very effective in getting the key messages to the public and to MPs.

Naturally the various Brexit organisations have to review our drafts and comment, before the final version is agreed. We hope readers feel the effort is worth it.

Our intention is to have an entire suite of one-pagers on all the key topics, as soon as possible. These will include subjects such as Northern Ireland, the Single Market, Defence, Fishing, and several more fundamental areas where we have powerful arguments to make. Many will contain official facts and figures, and simple charts, to illustrate the points at a glance.

OFF TOPIC - If the Benn Act is ultra vires can the Government be held in contempt of Parliament?
The similarities of the Cooper-Letwin and the Benn Acts.
Cooper–Letwin Bill makes provisions for extensions to the period defined under Article 50 of the Treaty on European Union related to the United Kingdom's withdrawal from the European Union. It was introduced to the House of Commons by Labour MP Yvette Cooper and Conservative MP Sir Oliver Letwin on 3 April 2019, in an unusual process where the Government of the United Kingdom did not have control over Commons business that day.
On 10 April 2019, the European Council agreed to a further extension to allow for the ratification of the Withdrawal Agreement by both Parties. Such an extension should last as long as necessary and, in any event, no longer than 31 October 2019. Parliament accepted with the the further restriction. This extension excludes any re-opening of the Withdrawal Agreement. Any unilateral commitment, statement or other act by the United Kingdom should be compatible with the letter and the spirit of the Withdrawal Agreement, and must not hamper its implementation. Such an extension cannot be used to start negotiations on the future relationship (Political Declation).
After six months Parliament has not conformed to the terms of the extension. The promoters of the Bill have given NO indication that they will ever ratify the WA.
No new agreement has taken place and the WA has not been reopened.

OFF TOPIC - The Benn Act was rushed through Parliament in similar circumstances for the same purpose. To
Make further provision in connection with the period for negotiations for withdrawing from the European Union.
It is difficult to see that if granted the EU Council could impose lesser conditions
The Media widely claimed the Acts as a success in preventing a 'No Deal' exit, whereas it actually prevents Article 50 from taking its course. It illegally holds the UK in an EU 'no mans land'.
Lord Kerr had this to say: “We needed a time limit (two years) in order to reassure the departing state that it could really depart — it would get out, it couldn’t be enmeshed forever in endless negotiation, it could escape.”
The two Acts are delaying exercises not negotiations, popularly known as 'can kicking'. Parliament is indecisive and stuck in rut, not wishing to enact the will of the people.

OFF TOPIC - I do not believe that what is being asked of the Scottish Courts is within their jurisdiction. Parliament has failed to comply with the terms of its current extension.

This one pager is an excellent summary of what Brexit is. I agree with it completely. I really hope people will distribute this as widely as possible.

Good summary, thank you! I also think that it's quite clear what the public meant by leaving the European Union. There weren't any conditions and sub-categories attached underneath any of the two options. All the current equivocations are made up as afterthoughts by remainers who just can't get over it. If the vote would have gone the other way we wouldn't be still having discussions like "Yes, but we didn't quite know what kind of falling EU we're staying in" or "We could just leave at least the Single Market or the Customs Union as the vote was so close".

Sydney, Martin Howe at the Bruges Group explains how the Surrender Act is unconstitutional & the SC have become politicised (per Bliar's intention) to uphold illegal Acts in their political interests. [FROM BREXIT FACTS4U.ORG - WE WILL BE RUNNING THIS VIDEO IN TOMORROW'S EDITION]
He then sets what the required first steps once we've left to rectify our Constitution following the destruction by those working on behalf of the EU, for which the only description is traitors. As he rightly says, our current Parliament is now illegal & refusing to dissolve itself & face the Court of the electorate.

I always felt, remain, particularly Cameron made it abundantly clear that leaving meant all of the above.
I often observe when remainers ask what sort of brexit we voted for, the remain version.
They kept telling us and yet we still chose it.

Another excellent fact sheet. Thank you.
Remainers need to read and understand. As I've said to so many of them "don't tell Leavers what they voted for. ASK."

Comment 9, Patrick - well said that man. I have yet to receive a single sensible answer from a remoaner. A bit like the wallies in London presently causing havoc because they can. Good to see the police are shutting some of them down.
High time we had a Government who let the police do their jobs properly.