Trading with the EU after 31 October – intro to a two-part Brexit Facts4EU.Org summary

What are the trade options for when we leave on 31 October 2019? 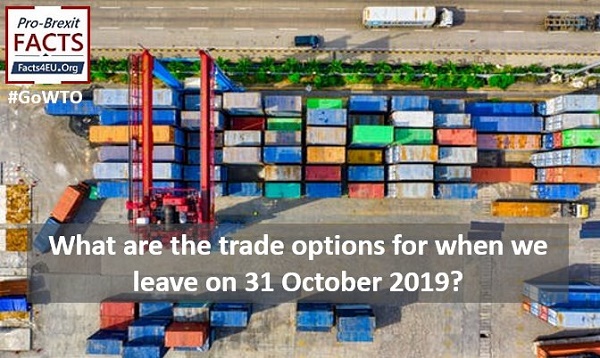 Readers have recently started asking us for a summary of the trading options for the UK, assuming we leave the EU on 31 October 2019 without a ‘divorce agreement’.

Firstly, the preferred option of a Free Trade Agreement would be impossible to negotiate in the time available. Such an agreement was initially offered by the EU in March 2017 but was ignored by Mrs May. The deal on offer was unacceptable as it cut Northern Ireland off from the rest of the United Kingdom, but it could have formed the basis for serious talks. These did not happen.

Brexit Facts4EU.Org will present a summary of each of these options, outlining the key points which readers need to know, and using everyday language. We also hope to present some commentary on these options by a leading MP who has a significant understanding of all the issues.

This is an important point to make. Theresa May’s Withdrawal Agreement (or the surrender treaty as we prefer to call it) is NOT a trade agreement. In fact it barely refers to trade.

This Withdrawal Agreement was drafted by the EU with the help of British Remainer civil servants and is little more than an imposition of all the UK’s EU membership obligations, but without having any say. It turns the UK into the EU’s first colony, with its laws adjudicated by a foreign court. Removing the infamous ‘backstop’ will not change the fact that the rest of this ‘deal’ is toxic.

No taxation without representation

The fundamental democratic concept of “no taxation without representation” started in England in the 1600s and was developed in the 1760s by American colonists and was a rallying cry for American independence from the Crown. Since then it has become a central tenet of democratic societies.

Under Mrs May’s surrender treaty the British people would have had no representation whatsoever, but plenty of taxation. It would be interesting to know what Americans would think if this were explained to them. Indeed, we suspect that a sizeable proportion of the British people are also unaware of the full import of the so-called Withdrawal Agreement.

In the end May’s ‘deal’ was voted down three times by the House of Commons and should be declared as officially dead by all protagonists – and especially the two Conservative leadership contenders.

In the next two articles we will focus on two forms of trading arrangements between the UK and the EU which could be possible without a divorce deal imposed by the EU.

The EU member States trading with the UK do not plan to stop trading on 1st November. If they did so many with reduced cash flow would go out of business.
In the Aviation sector the Commission needs to sign a new ICAO ASA valid on 1st November.
RyanAir is in the invidious position of being an EU Carrier operating under 7th Freedom rights in the UK.
It will require a special dispensation from the UK Government.

I was one of those who contacted you to ask about the trading options, so thank you so much for the summary. I read it with interest and I'm looking forward to part 2.