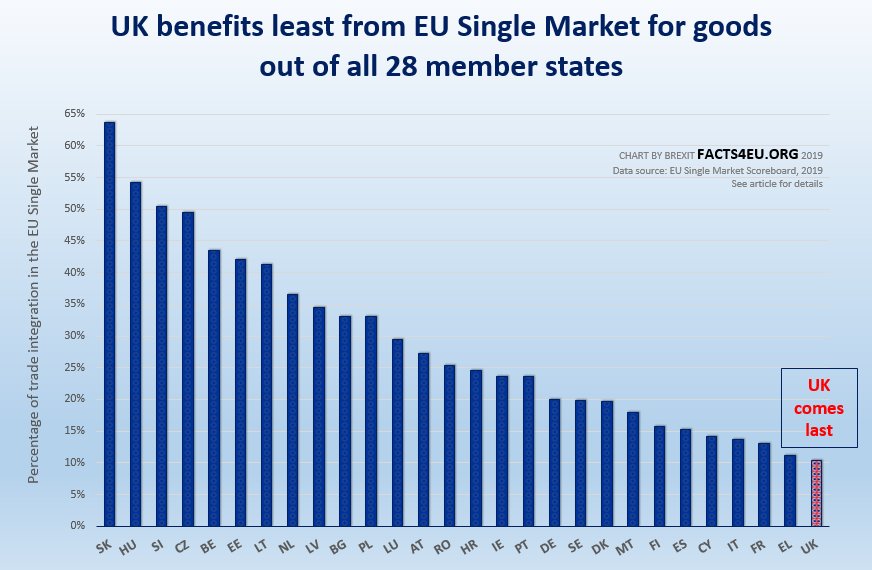 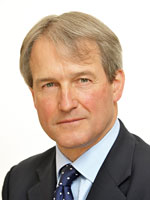 The latest official EU Commission Single Market report of 2019, released yesterday, shows that the UK benefits LEAST out of the 28 member states when it comes to the EU’s ‘Single Market’ for goods.

Brexit Facts4EU.Org has analysed the figures contained in “the Single Market Scoreboard” and we present a summary which we believe should be required reading for all Remain MPs.

“Trade integration” refers to the percentage of a country's GDP that is accounted for by trade with other EU countries (imports and exports). It is the EU's fundamental measure of how well a country does from its Single Market membership.

The EU’s Single Market Scoreboard combines import and export figures within the Single Market to show the overall involvement of each country. The UK comes last out of 28 countries.

The above chart includes exports AND imports. Next we look at how the UK performs in exporting goods and services to the Single Market - which is where the UK earns money. 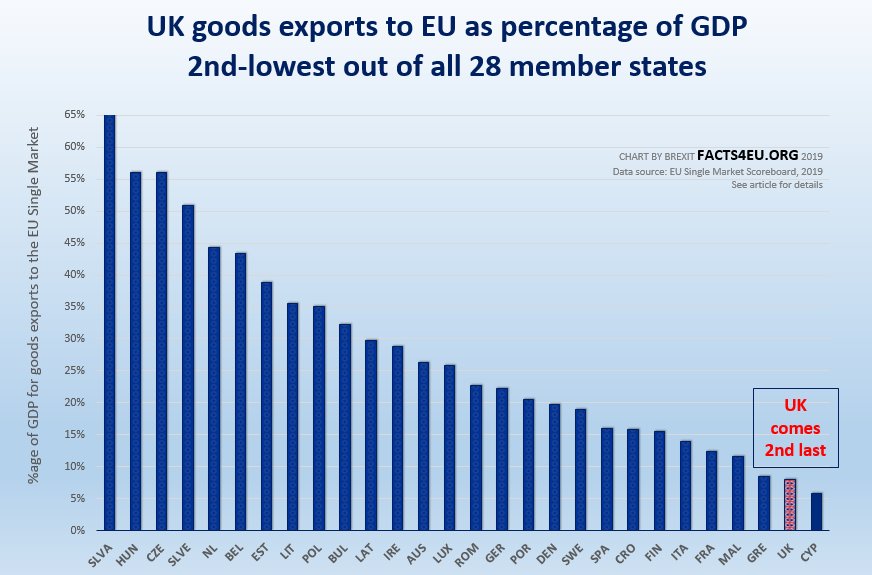 The chart above shows how much each country’s economy benefits from exporting goods to the EU’s Single Market. It is the trade in exporting goods which Remain MPs claim is vital to the UK economy. In fact the UK is second from bottom, only beaten into last place by little Cyprus which does not have a highly-developed manufacturing sector.

Fake news? No, these are the EU’s own official figures

Remain-supporting MPs are continuing to argue that membership of the Single Market (or some equivalent) is essential to the United Kingdom’s economy.

The data above comes from the EU itself. Brexit Facts4EU.Org uses EU data wherever possible because then it cannot be contested by those MPs who seem to have a blind allegiance to that organisation.

The simple fact is that the Single Market is benefiting many EU countries,
but for the world’s fifth-largest economy to be bottom of the list
in its own backyard is damning, to say the least.

So what do we do about trade with the EU?

The above information from the EU, published yesterday, demonstrates beyond doubt that the UK does NOT benefit from the Single Market in the way most Remain MPs claim in Parliament each week.

Taken together with our weekend articles on the way forward for UK trade with the EU, it is clear that a robust and confident approach is required from the country's next Prime Minister.

We asked the Rt Hon Owen Paterson MP, former Secretary of State with extensive experience of the EU, for his views on UK-EU trade going forward. This is what he told us:-

“There is no good reason that the UK and the EU should not agree a mutually-beneficial trade deal.

“To get there, both sides can agree to maintain our current zero-tariff, zero-quota arrangements for a transition period while the eventual deal is finalised. Such an agreement - a real but temporary FTA – need not be complicated. It could be written on a single page. But as with any negotiation, our best chance of securing a good deal is to be fully prepared to leave without one.

“The ludicrous scaremongering surrounding ‘no deal’ has been exposed and debunked. Indeed, ‘No deal’ itself is a misnomer, as many practical agreements have already been agreed. A deal is in the best interests of both the UK and the EU, so ‘no deal’ is unlikely to be an end state.”

Not only do we benefit the least, we lose our sovereignty at the same time

Critically, any discussion of trade should go hand-in-hand with the loss of sovereignty involved with being members of the Single Market and Customs Union. For there to be so little economic benefit, and for the cost to the sovereignty and democracy in the UK to be so high, we suggest that Remain MPs lose the argument on both sides.

With a managed WTO-terms Brexit, trade will continue. Every country in the World (except a few pariah states) has access to the Single Market.

We agree with Owen Paterson

We wholeheartedly agree with the Rt Hon Owen Paterson MP – a man with considerable experience of negotiating with Brussels – that it is possible to agree to maintain the status quo in terms of trade arrangements while the UK and EU negotiate a free trade agreement.

If the EU were interested in the prosperity of its citizens it would have agreed a trade deal by now, regardless of what it says in the Treaties about having to wait until the day after exit. What a nonsense notion that is. If you know something is coming, you prepare for it. The last thing you want to do is damage the jobs and livelihoods of millions of EU citizens by waiting for no reason.

Finally - and regardless of the EU ideologues’ reaction to sensible proposals from the new UK Prime Minister - no-one is saying that trade with the EU will disappear when we leave.

The UK will continue to have access to the Single Market just as every other country around the world has, including the USA, China, etc. It’s only the terms which will change, and it’s only the EU that can make these as illogical and damaging as possible, for no good reason.

Readers may wonder why such an important piece of news does not appear on the BBC nor in the newspapers today. The EU buried this news in a press release about infringements of EU law by member states. It takes a lot of time to ensure that highly relevant information to the Brexit debate is not missed, and that it is researched thoroughly and brought to the attention of readers. We can only do this with the help of you, the public. Please help us to keep going with a a donation if you can. Quick and secure donation methods are below. Thank you.

[ Sources: EU Commission Single Market Scoreboard | the Rt Hon Owen Paterson MP ] Politicians and journalists can contact us for details, as ever.

When the Withdrawal Agreement appeared and was read by 'legal Eagles' such as the Attorney General, it should have been obvious that signing it was not leaving the EU with a trade agreement and future relationship settled any time soon.
The quickest way out was to let the two year (this) period to expire at 11 pm on 29th March 2019. Trade on WTO terms and seek to negotiate an FTA.
Due to an unwilling Parliament in stasis over brexit this will now take place by default on 31st October.
In March 2017 Lord Kerr said: “We needed a time limit in order to reassure the departing state that it could really depart — it would get out, it couldn’t be enmeshed forever in endless negotiation, it could escape.”
The WA would have defeated this aim.

This is a good article. Surely you can get some more comments from politicians about this? This news needs to be spread very widely indeed. I like the fact you've used the EU's own figures to demolish the arguments of remainer Mp's. I also liked ythe point in your observations about the trade-off with sovereignty. If we're only gaining marginally put have to pay though the nose in losing our independence who would want this?

There is no marginal gain as we are restricted in international trade. We are dictated to by an unelected Board! Belgium certainly gain. Not sure why Greece, Italy, France and Italy continue as their gain is limited.
When the EC commenced ir the EEA there was no internet, fax or telex !
The shipping by plane was limited there was no Euro tunnel!
It is a different world in communications, prediction and. Analysis on crops and trade.
And immigration. The populations have access to free tertiary education - populations that are highly educated and trained, robotics and automation assists with production lines and logistics. Algorithms places the stock market in a second by second best to the world wide markets.
It’s a global market
It is time the UK woke up because we are sleep walking into a restricted market
And tying ourselves into knots that can only compromise citizenship and erode a democratic society into a stepford estate

If only Philip Hammond could read! lol

Yes, but that's trade in GOODS only. It doesn't include trade in SERVICES figures. That's one of the mainstays of modern British exports, leaving them out is like trying to measure the mass of a car by only weighing its wheels.
Good grief, Brexiteers are so gullible!

Dear Martin O, did you not read the article? Perhaps you only looked at the pictures. In the article we clearly state in two bullet points:
"Only 5.6% of UK GDP relates to UK services exported to the Single Market", and
"For services, the UK is third from bottom, despite having the largest services economy in the EU"
This information comes from your EU itself.
You might also wish to know that the EU Commission states that the Single Market doesn't yet work for services, despite it having been going for over 25 years.
Good grief, we wish Remoaners would read....

Oh, and you also don't know what 'Trade Integration' means, judging by the descriptions you provide. It doesn't mean the AMOUNT or PROPORTION of trade done with the EU. It means the degree of conformity of trade conditions between the UK and the typical terms within the trading bloc i.e. how much trading conditions here match trading conditions in other EU countries. Our degree of integration is so low because we are not part of Schengen or the Eurozone, among other reasons.
The fact that the UK conforms so little only serves to emphasise that Leavers who insist that the country is 'oppressed' by the EU and is 'always being told what to do' are talking utter rot. The British are allowed to go their own way all the time, and usually do.

Yes, I did read the article, thank you. I didn't bother with the pictures, because I was immediately suspicious about the fact that the graphs were all YOURS rather than the ones provided by the EU. There was no need to make your own, unless you were trying to hide something. That's why I went as far as to check the relevant page (which, again suspiciously, you offered no direct link to) on the EU SM Scoreboard, and saw all the little points of variation between what you said and what they say.

"You might also wish to know that the EU Commission states that the Single Market doesn't yet work for services, despite it having been going for over 25 years."
Really? Well that's odd, page 8 of the the UK factsheet lists "Trade in goods **and services**" (emphasis mine), so they clearly measure it. Whether it 'works' or not really is neither here nor there, isn't it?