You won't see this on the BBC

Yesterday the EU Parliament moved another step closer to the goal of a common EU defency policy and EU Defence Union:

“aiming for a more European approach to defence”

328 MEPs voted in favour, with 231 against and 19 abstaining. They approved the next part of the EU Defence Fund (EDF), totalling €13 billion (£11.2 billion pounds). This means that the EDF can now go to the EU Council for final discussion and approval.

Where has all this come from?

Since mid-2016 (the time of the EU Referendum) the EU Commission has been ramping up its plans for an EU Defence Union. Sadly, Mrs May and other Government ministers have quietly acquiesced in all of this.

“The €13 billion Fund shows that this Commission is serious about building a Europe that defends and protects its citizens.”

It is important to note that all the impetus for this has come from the unelected EU Commission, NOT from elected politicians. 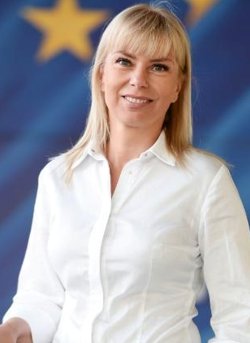 “The Juncker Commission is making an unprecedented effort to protect and defend Europeans. From 2021, a fully-fledged European Defence Fund will foster an innovative and competitive defence industrial base and contribute to the EU's strategic autonomy. Through two precursors to the Fund, the Commission is taking steps to make defence cooperation under the EU budget a reality as of now.”

At the same time they announced an immediate commitment of over €0.5 billion.

“Joint projects are materialising. European Defence is happening. On the basis of this successful experience we will scale up funding to have a fully-fledged European Defence Fund in place in 2021.”

On top of all the above, there is an additional €10.5 billion fund which the Commission proposes to keep “off-budget”.

Here is how we reported it at the time.

“It will cover expenditure that cannot be financed under the EU's budget because of its military and defence implications.”
- EU Commission, June 2018 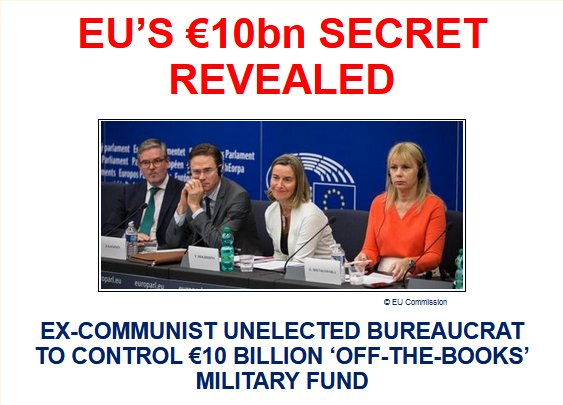 The significance of yesterday’s vote by MEPs

“With today's vote, a fully-fledged European Defence Fund is now on track to become a reality. I want to thank the European Parliament as well as all other EU institutions on taking fast and decisive action on this key political priority.”

Please note that this is just ONE article amongst many dozens we have researched and published about the EU's military preparations. All of these articles are in our Brexit Index and they cover all aspects of the preparations the EU has been making towards its Defence Union, researched from official EU and NATO sources.

It is no longer possible or credible to claim that the EU is not in the process of creating its own fully-inclusive military forces and capabilities.

Doubt our word? Maybe it's time we produced another summary for you.

You won’t see any of the above from the BBC, Sky News, or ITN, so we thought you might like to be informed.

Over the last three years we have published more about EU defence matters than any other Brexit organisation. We will continue to try to keep you up-to-date, although it has to be said that we have nothing like the resources of the large news media.

You can of course help us with this, by making a donation to the cause. We don’t have plush London offices, nor secretaries, nor expense accounts. And we will continue to work and publish throughout the Bank Holiday weekend, as we always do.

Donating is easy and secure. Please see below for the ways you can do this.

Happy Easter to all our readers!

I have to say I find this a little absurd. I don't claim to be an expert in defence matters but 13 billion euros is a paltry sum. How you can link this to the creation of a common European defence force is beyond me.

Scientist, are you saying the EU Parliament and EU Commission are liars?

Then you also have to take into account scurrying away continually in the background the Franco British Council. Look them up.

Scientist - REPLY FROM THE BREXIT FACTS4EU.ORG TEAM
As you say, you are not an expert in these matters. At the risk of sounding as arrogant as you sometimes do, we have some expertise after three years of researching and publishing daily.
The €13 billion is the tip of the iceberg. To that you must add the €10.5 billion 'off-the-books' fund which we mention in the article. Then there's the cost of all the other programmes which the EU tries to classify under 'security'. If you want just one example, are you aware of the 10,000-strong 'EU Border Force' which has now been implemented? Note the word 'Force' in the title. Or perhaps you might want to look at the new EU Battlegroups? Or maybe the new 'rapid deployment' programme to mobilise troops and equipment across borders within the EU, which can be used for internal problems?
The EU always works to disguise what is really going on. We see it all the time. The real costs in any one area are always way beyond the cost of one individual programme. We have summarised these in previous articles.
You're welcome.
Regards and Happy Easter, the Brexit Facts4EU.Org team

Scientist - it is blatantly obvious that just about everything is 'beyond' you. If you choose to be blind, deaf and dumb (in the stupid sense) to realty then there is no hope for you.
Such ignorance is pathetic, but the bottom line is: are you willing to be sacrificed, subjugated and bled dry by an empire building Federalist dictatorship and in the process, have your vocal chords ripped out with no say or power of veto in the future??
WE most certainly are NOT. The fight for freedom continues in spite of delusional fools such as yourself.

Thought EU votes had to be 100% for. Oh yes they are allowed to change the rules if they don’t like them. How did we get into all this without Parliament knowing about it. Give me NATO ( and America ) anytime. They’ve done the job for 70+ years

The danger is that the European Defence Fund morphs into an EU Treasury.
Once the EU has Member states on the hook for their share of defence expenditure (eg 2% per country, NATO style) they will have the basis of a treasury - and a means to tax countries directly. This is something they have yearned for.
EU military unification is a stalking horse for fiscal integration. Make no mistake the EU wants political, monetary, defence and most importantly fiscal integration. People who still insist on denying this creeping federalisation are denying reality.

My message to the EU Commissioner:
Bienkowska, before you get any more 'serious about building a Europe', I'd like to point out that Europe has already been built, would you believe, even before the EU existed. You are not building Europe but trying to distort it into a Superstate, controlled by unelected, unqualified, arrogant and cynical careerists like yourself. As much as you'd like to believe it, people are not fooled.

FROM THE BREXIT FACTS4EU.ORG TEAM:
Please see the three short paragraphs we've added to the article above, and in particular you might want to click on the link to the next article.