As the World Cup starts, we present the official World Bank rankings, for Rejoiners to ponder 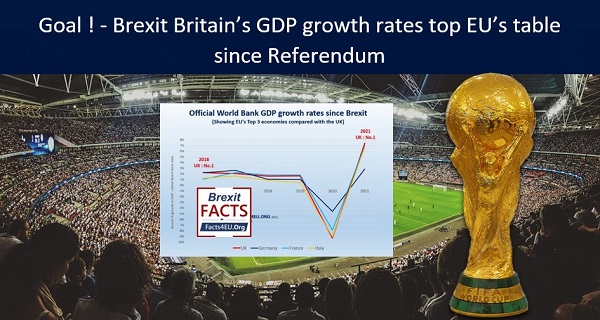 In the 6 years since the Referendum, UK beats Germany by 4 goals to 2 (and no penalties)

Just as the football World Cup is about to kick off in Qatar, Facts4EU.Org looks at the scores for Brexit Britain since the EU Referendum, comparing the UK’s annual GDP growth rates with the EU’s three largest economies : Germany, France and Italy.

Rejoiners might find this surprising, but the United Kingdom tops the table and hoists the trophy. Given the world’s biggest sporting tournament about to start, we felt it appropriate to use the World Bank’s official data.

Latest official scores from the World Bank since the EU Referendum

The UK beat Germany in the rankings in four out of the last six years, including last year.

The UK's economy grew faster than the EU's top 3 last year, and faster than any other G7 country. 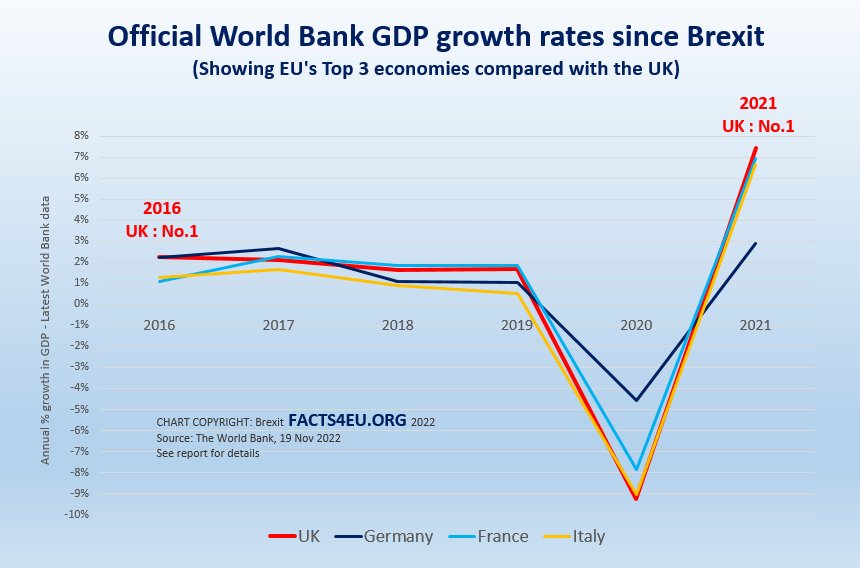 When looking at GDP since the EU Referendum it is also worth reminding ourselves what we were threatened with if we voted to leave the European Union. Most readers will still have vivid memories of the apocalyptic forecasts from the then Chancellor George Osborne, his HM Treasury, and the Bank of England.

The Treasury produced a 201-page long-term impact forecast on 18 April, followed by a 90-page short-term "immediate impact" forecast on 23 May 2016. Below we focus on the latter as it was released just 30 days before the British public voted and was heavily promoted in speeches by George Osborne, David Cameron, and large numbers of Remainer MPs.

George Osborne even referred to a vote to leave being a vote to inflict self-harm on the UK – the equivalent of ”an own goal” in our footballing analogy.

"We already know the long-term effects of a vote to leave: Britain would be permanently poorer.

"Now we know the short-term shock too: an economy in recession, major job losses and a self-inflicted blow to living standards and aspirations of the British people." 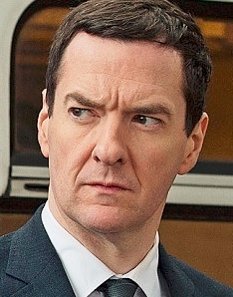 "A vote to leave would cause an immediate and profound economic shock creating instability and uncertainty which would be compounded by the complex and interdependent negotiations that would follow. The central conclusion of the analysis is that the effect of this profound shock would be to push the UK into recession and lead to a sharp rise in unemployment."

"In the shock scenario, a vote to leave would result in a recession, a spike in inflation and a rise in unemployment. The analysis shows that the economy would fall into recession with four quarters of negative growth. After two years, GDP would be around 3.6% lower in the shock scenario compared with a vote to remain."

What happened to your “immediate recession”, George?

As the World Bank and OECD figures above prove, there never was any recession. In 2016 and 2017 the UK economy continued to grow at a rate higher than the long-term average.

In 2018 and 2019 the UK economy kept on growing. The rate was marginally lower than the previous two years, but there was still no Osborne-Cameron recession. It should be noted that Germany’s drop in GDP growth was much greater – and yet Germany hadn’t voted for ‘Dexit’.

Heading the ball into the back of the net

Once again Facts4EU.Org has presented some inconvenient truths for the increasingly well-funded Rejoin campaigns to try to explain away. We have done this as the ‘facts engine’ for the Rebuttal Unit of CIBUK.Org.

Rejoiners (in the campaign organisations and in the BBC and other broadcast media) are constantly referring to the UK’s economy not having recovered to its pre-Covid levels – as if Brexit caused Covid.

The economic damage caused by the Government’s Covid policies has absolutely nothing to do with the British people’s decision to leave the EU. It seems extraordinary that we have to point this out but these days it seems we must.

Following the Hunt-Sunak-OBR “poverty budget” on Thursday, we are pessimistic that Brexit Britain can maintain its winning status in the next few years. We very much hope we are proved wrong. If we are right, however, it will have nothing to do with Brexit but rather with the Government’s economic policies and with the absence of the delivery of the Brexit benefits we wrote about yesterday.

Tomorrow we will deliver our devastating indictment of the record of forecasting on which the Government decides economic policy. As readers will find out, our report today has considerable relevance to the decisions arising from the Autumn Statement which Jeremy Hunt delivered three days ago.

Reports like the one above take far longer to research, write and produce than many people realise. If they were easy, readers would see other organisations also producing these daily.

However, there’s little point in the Facts4EU.Org team working long hours, seven days-a-week, if we lack the resources to promote them effectively – to the public, to MPs, and to the media. This is where you come in, dear reader.

We badly need more of our thousands of readers to become members, to support this work. Could this be you, today? It's quick and easy, we give you a choice of two highly secure payment providers, and we do NOT ask you for further support if you pay once. We just hope you keep supporting us. Your membership stays anonymous unless you tell us otherwise.

Please don't assume that other people will keep us going - we don't receive enough to survive and we need your help today. Could you help us? We rely 100% on public contributions from readers like you.

If you believe in a fully-free, independent, and sovereign United Kingdom, please join now by clicking on one of the links below or you can use our Support page here. You will receive a personal, friendly ‘thank you’ from a member of our team within 24 hours. Thank you.

[ Sources: World Bank | OECD | HM Treasury | George Osborne ] Politicians and journalists can contact us for details, as ever.

All the news today is about how bad the UK is doing. Seems the opposition and BBC think the rest of the EU is doing so much better.

Does this mean that Facts4EU believes that the Boris-Frost deal has avoided the Armageddon that Osborne predicted … but at the same time did not deliver the Brexit benefits as mentioned in yesterday’s article? And that Liz Truss’ mimi-budget would have delivered the Brexit benefits … but resulted in an Armageddon in the financial markets?

Some experts for Brexitears to ignore: Bank of England experts outline how Brexit destroyed the UK economy - YouTube

I am in tears over the views of BoE expert opinion condemning brexit again. That's what happens when you laugh so much ... BoE and "experts" ... a contradiction in terms.

Imagine being as delusional as these Brexitists.
Not only does everybody recognise your Brexit is an epic disaster for our country, they are now openly saying so as well.
The Brexitists in government still struggle with the basics - and rantings goons like Mogg, Frost, Jones, Redwood try miserably to defend their failed project. How many of them will end up in Belmarsh I wonder?

Rejoiners won't even bother reading any facts that don't support thier narrative. It's all political, they have contempt for UK leaving and our culture. Very sad.

All very well, but if you take the second differential of the production of sand-crabs,subtract the date, and divide by the square root of Westphalia, you can get a different number.

There is nothing going on her except Buster's grandiose ego. We are out of the EU and neither political Party in even remotely talking about rejoining. That is the fact and everything else is hot air.

So Steve Barclay went on the breakfast shows this morning to deny that the Government even want a Swiss-style deal with the EU. Does that tell you something about the imaginary "damage" Brexit has done? A deal they could have for the asking, and which would undo the supposed "disaster" at a stroke, and which would probably be hailed as a compromise. And we simply do not want it.
Meanwhile, Labour's top priority seem to be an elected House of Lords. Got that? Electing a House that has no power has higher priority than even an arm's length deal with the EU.