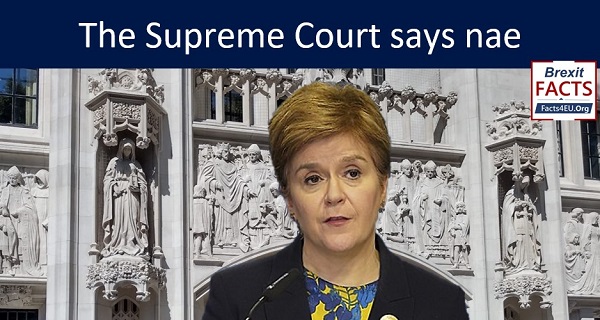 Instead shouldn’t the SNP be stopping Scotland becoming an economic and social basket case?

In its ruling yesterday on Nicola Sturgeon’s latest obsessive and absurd attempt to deny the laws of the land, the Supreme Court confirmed what everyone (apart from Ms Sturgeon, it seems) already knew.

The SNP government in Scotland has wasted a huge amount of time and taxpayer money on a Scottish Independence Referendum Bill which asks the question, “Should Scotland be an independent country?” They then had to go to court (at further significant cost) to have it confirmed that in fact this Bill is not constitutional.

Meanwhile Scotland’s problems caused by the SNP government continue to pile up, much like the uncollected bags of rubbish in the streets which greeted the COP26 world leaders and visitors to Glasgow this time last year.

In a unanimous judgment the Supreme Court confirmed yesterday that “the Scottish Parliament does not have the power to legislate for a referendum on Scottish independence”.

Any superficial reading of the Scotland Act - particularly section 29(2)(b) - clearly shows that any proposed referendum on Scottish independence would relate to matters which have been reserved to the United Kingdom Parliament. This is something which is incontestable… unless of course you are Ms Sturgeon.

The Supreme Court could have declined to hear the case at all, given that an argument could be made that what Ms Sturgeon and her SNP colleagues did could be said to amount to ‘vexatious litigation’. There was really no legal case at all. Perhaps in an effort to placate the implacable Ms Sturgeon, however, the Supreme Court agreed to hear the case - before ruling against it on all counts.

At the time, the then SNP leader Alex Salmond did indeed refer to it as a “once in a lifetime” event. He did so in an interview with none other than Jeremy Paxman on the BBC’s Newsnight programme.

Here is the foreward to the official White Paper from the SNP Government called “Scotland’s Future”, published on 26 November 2013:-

“If we vote No, Scotland stands still. A once in a generation opportunity to follow a different path, and choose a new and better direction for our nation, is lost.”

And here is the preface :-

“The debate we are engaged in as a nation is about the future of all of us lucky enough to live in this diverse and vibrant country. It is a rare and precious moment in the history of Scotland - a once in a generation opportunity to chart a better way.”

The SNP, Scotland, Brexit, and the EU

Scotland voted by 55.3% to 44.7% to stay in the United Kingdom. This was an emphatic rejection of the SNP’s raison d'etre.

The SNP’s justification for their continued obsession with independence from the United Kingdom (more specifically from the English) now lies in their claim that “Scotland was dragged out of the EU against its will – the circumstances have changed.”

The logical absurdities and harsh economic realities against this argument are on such a scale that we will deal with these in subsequent articles.

In their fantasy world, the SNP government of Ms Sturgeon seems to think it acceptable to waste taxpayer money and a great deal of time and effort on one issue which was decided democratically six years ago.

The problem for the Scottish people is that while the SNP’s and its First Minister’s minds are focused on this one obsession, Scotland’s problems continue to mount.

We believe that the majority of people in the rest of the UK are unaware of just how bad things have been getting north of the border after 15 years of SNP rule. We will cover these issues in a future report, as well as a report looking at the logical implausibility of the SNP’s views on joining the EU, and another report on the practical impossibility of doing so.

And before our Scottish readers start to get concerned, we would like to quote something from Alex Salmond ahead of the Independence Referendum of 2014 that we entirely agree with :-

"Scotland is an ancient nation, renowned for the ingenuity and creativity of our people, the breathtaking beauty of our land and the brilliance of our scholars. Our national story has been shaped down the generations by values of compassion, equality, an unrivalled commitment to the empowerment of education, and a passion and curiosity for invention that has helped to shape the world around us. Scots have been at the forefront of the great moral, political and economic debates of our times as humanity has searched for progress in the modern age."

Well said, Mr Salmond. A shame that most of your other utterings about Scotland have been such nonsense, but we'll agree with you on the above.

Reports like the one above take far longer to research, write and produce than many people realise. If they were easy, readers would see other organisations also producing these daily.

However, there’s little point in the Facts4EU.Org team working long hours, seven days-a-week, if we lack the resources to promote them effectively – to the public, to MPs, and to the media. This is where you come in, dear reader.

We badly need more of our thousands of readers to become members, to support this work. Could this be you, today? It's quick and easy, we give you a choice of two highly secure payment providers, and we do NOT ask you for further support if you pay once. We just hope you keep supporting us. Your membership stays anonymous unless you tell us otherwise.

Please don't assume that other people will keep us going - we don't receive enough to survive and we need your help today. Could you help us? We rely 100% on public contributions from readers like you.

If you believe in a fully-free, independent, and sovereign United Kingdom, please join now by clicking on one of the links below or you can use our Support page here. You will receive a personal, friendly ‘thank you’ from a member of our team within 24 hours. Thank you.

[ Sources: Supreme Court | Scottish government | BBC Newsnight ] Politicians and journalists can contact us for details, as ever.

Just think how much time, effort and cost has gone into that campaign, considering everything else that's going on in the world right now

Being a patriot is good….being financially stupid is unacceptable.

Ignore the results of two referendums because you don't like the result;
Can't fix Scottish Education;
Can't fix Scottish NHS;
Can't fix Scottish Social Care;
Can't produce a proper ferry service in 15 years;
Yet can consistently find public money to finance personal ambitions.
Despite increasing sums provided TO Scotland, several 'unexplained' black holes in finances & lack of transparency/ auditing. Just where is this money being spent? Public money for the Govt to run Scotland couldn't be being spent on party political projects, could it?
Anyone might think that it's just another money-laundering operation to enrich the few at the cost of the many. I'm beginning to think that the HoC benches where the SNP sit might need strengthening as they get ever larger. They don't really want 'induhpendence' as they immediately want to cede it to a foreign power. They just want unfettered access to the credit card & are useful idiots for the EU.
The poor ordinary Scots...

It was deliberate no doubt. By "losing" sturgeon calculated that she could ramp up significantly the vitriolic propaganda against the government and union in her warped bid to mislead and force Scottish people into believing independence was the only way to go. The SNP have been learning lessons from the likes of Lenin, stalin and Mao at the effectiveness of engineered rhetoric on the general population. Low education levels are essential for this to work too and what has happened to Scottish education standards in the last 15 years???

To be fair incompetent governance preceded SNP. Has anyone seen the Scottish Parliament building. Estimated to cost 40 million but ended up costing 400 million. The interior is nothing to shout about but the facade is a bamboo screen ... bamboo ... now what part of Scottish history does that most represent ? Slavery times ? Does the current woke SNP consider that OK ... of course ... but gender identification takes a major place in their agenda, see their recent census full of "sensitive" questions about what gender you want people to think you are.

Tom Billingham She couldn't care less about the cost. Not her money.

She will fit in well when they rejoin the corrupt EU, if a vote doesn't go your way then just keep having them until you get the result that you want, and she has the nerve to bang on about democracy.
Thought the first vote was a once in a generation opportunity

I wonder if people get the irony that a Party that wants to make Scotland independent of the UK is nevertheless willing to obey UK Law and the UK Supreme Court. Obviously there are advantages to everyone in this - stability being one -- but imagine a World in which in which every similar situation was worked out in boring law courts instead of on the battlefield. And this is no innovation. We all know about spectaculars like 1776 - but most constitutional change in the UK, including Irish Independence, has come about by negotiation and legal means.

She isn’t humiliated at all. The SNP knew this was the likely outcome and it proves their point.
If the UK were really both a voluntary and a desirable union then nobody would want to leave it and nobody would fear having a vote about leaving it.
The truth is though that the Tory Brexitists have shat on Scotland. The same way that they shat on Northern Ireland, on Wales, on London, on graduates, on the young.
There has been so much Tory Brexit poo raining down on the majority - and spewing out into our rivers and seas - that the rest of us are done with it. We’ve had enough of red faced old people dumping on us. Pay back time is coming - and the Brexitists are gonna hate it.

Buster is showing his hand. It's really the UK he hates. Anything that is an exuse to harm the UK is fine by him. For Buster, the EU's main attraction is foreign rule over the rest of us. For Buster, the SNP, Sinn Fein, and a lot of others, the tragedy of Brexit is that it halted the dissolution of the UK into an anonymous set of EU Regions. Under the covers, remain is really about getting rid of the UK altogether.