630,000 asylum-seeker applications in the EU last year – how many UK-bound? 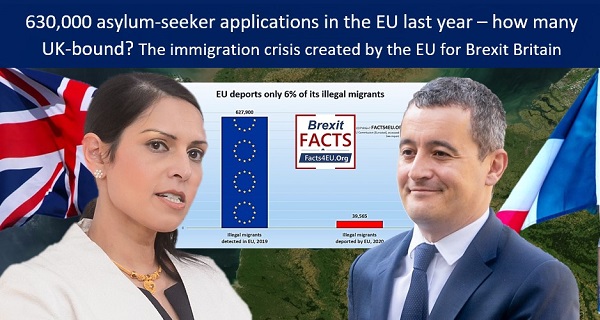 Part Three (this report) - The EU's dismal 6% record in deporting illegal migrants - now many are UK-bound?

In today’s report we show how the numbers claiming asylum in the EU are several times the number of those detected at the EU’s border. We also reveal just how few are ever repatriated.

Migrants illegally present in the EU – that they know of

Immigration statistics in the UK have generally been quoted as abstract numbers. For example: “Net migration in the UK last year was…”  When it comes to the illegal migrants being pushed across the English Channel by unscrupulous people traffickers, however, we can be more specific.

When the EU finds these people, what does it do?

Facts4EU.Org looked into the detail contained in EU databases regarding illegal immigration. In particular we analysed the ‘returns’ figures. What follows relates to 2019 and 2020 – the last years for which the EU has recorded numbers.

Repatriation of illegal migrants in the EU 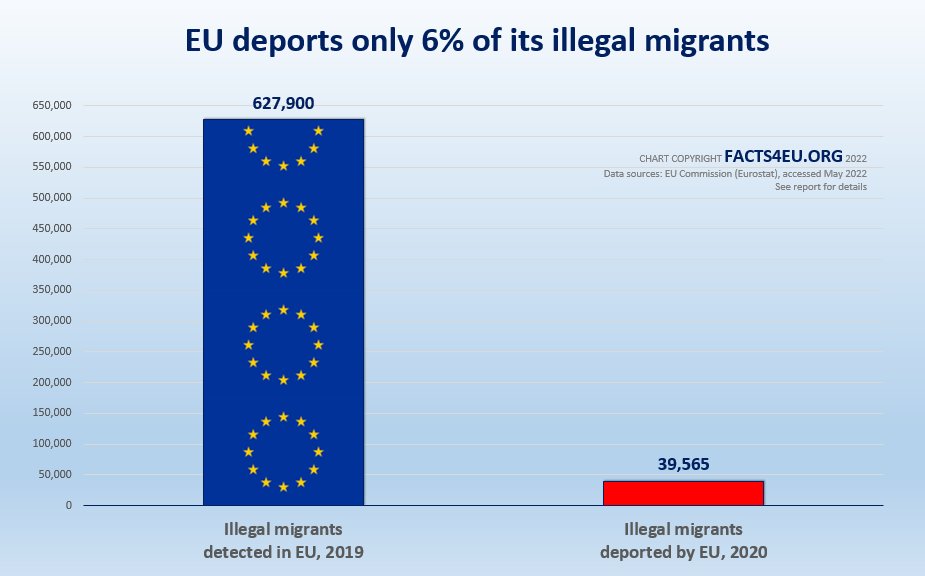 Why don’t the French or EU do something about the illegal migrant Channel crossings? 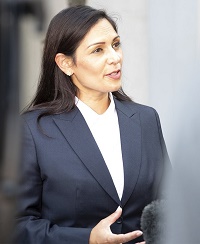 Home Secretary Priti Patel has made repeated attempts to persuade the French to do something about the thousands of illegal migrants departing French shores for southern England. She has paid them millions (and offered even more millions) to get them to increase their border officials and patrols.

In August last year she proposed to her counterpart, Gérald Darmanin, that the UK and France create a joint command center for the French and British coastline forces, particularly to share intelligence on people traffickers. Darmanin rejected this as “premature.”

Priti Patel has also repeatedly requested a bilateral deal with France to return asylum seekers. Again this has been rejected. The French appear to have used the EU as their excuse, saying the EU is developing its own policy and that this takes precedence over a bilateral deal.

“On the matter of readmitting migrants who have taken small boats, France still gives priority to a European solution, a process in which I hope the UK will get involved in its relations with the institutions of the European Union and other European partners.”

“The feasibility of a very small number of ad hoc bilateral transfers, to respond to targeted situations, will be studied at technical level before we progress further.” 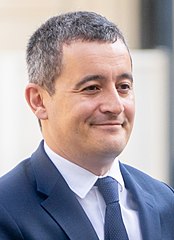 In short, the French have been obstructive and the EU Commission seems content to do nothing.

Governments around the world know that illegal immigration is a topic that the majority of their populations are deeply concerned about. This is certainly true in the United Kingdom.

Given that action on this by governments would be a vote winner, why don’t they act?

Readers will have their own views on this and some will favour theories about ‘Common Purpose’ and other suspected groupings of high-powered people.

One thing we do know for sure is that the UN’s agency, the ‘International Organisation for Migration’ (IOM) is an advocate of open borders. And the IOM is an organisation enthusiastically supported by the EU.

The UK Government’s solution is now to send a majority of the illegal migrants to Rwanda, to deter people from making the crossing. The only problem is that none have yet been sent, and human rights lawyers are queueing up to challenge the Government in the courts, as a result of the UK continuing to be a member of the ‘European Court of Human Rights’.

Unless and until the Government acts to withdraw the UK from this outdated and politically-motivated institution, we believe Ms Patel will struggle to get a single illegal migrant onto a plane.

We really need your help. We are a 'not for profit' team (we make a loss) and any donation goes towards the actual work, not plush London offices, lunch or taxi expenses, or other luxuries of some organisations.

We badly need more of our thousands of readers to donate. Could this be you, today? Maybe you've been thinking about it, but just haven't got around to doing it? If so, let us reassure you. It's quick and easy and we offer a choice of two highly secure payment providers. And we do NOT ask you for further donations if you donate once - we just hope that you keep supporting us. Your donation stays anonymous unless you tell us otherwise.

Have You Wondered, more importantly, how many illegal migrants come into the UK?
.
The figures quoted appear to deal with numbers into the EU.
.
My research suggests:
.
Based on 20 yr old figures! ………………... Finding upto date figures proves to be difficult as the UK chooses not to publish them anymore - unless you know different.
.
“”Although it is difficult to measure how many people reside in the UK without authorisation, a Home Office study based on Census 2001 data released in March 2005 estimated a population of between 310,000 and 570,000 “” en. wikipedia . Org /wiki/llegal immigration to the United Kingdom
.
Lets call that 400,000
.
That’s a city’s worth of illegal immigrants the size of Leicester or Leeds !! (Wiki)
.
Based on 20 yr old figures !!
.
Is that sustainable?

1. Have You Wondered . No, it's not sustainable, and that's why we have to find places for them to go where they can do some good. Some countries actually need an influx of migrants with basic skills.

3. Adam. That is what is called a "false choice":. A country as rich as the UK is perfectly capable of securing its own borders AND helping a country that is the victim of aggression. We do not have to chose just one.

This year's vote must be really crucial to afford a multi-part refugee & illegal immigrant rant. To even call for further isolation by removing ourselves from the UN & abolish Human Rights? Dream on. We'll simply undo it all once the populist din dies away & common sense re-enters society anyway.
Quite often I wonder how 1930s Germany found itself at the juncture it did just before the outbreak of WW2. This is how - alone, resentful, anti-education, harbouring delusions of grandeur, an acute but distinct failure to distinguish proganda from reality, the blame of external factors or people instead of their own inadequacies.... the right wing playbook.
History repeats itself because poeople don't learn the first time round. Brexiteers being no exception, I envisage such a cycle for a few decades, until the educated younger generations set us on a sensible course once more.

Reply to 5, Wave. You really haven't even looked at the history of Germany through the years following ww1. The treaty of Versailles demanded Germany pay exorbitant reparations mostly to France who were determined to humiliate Germany long and bitterly. When Germany tried to change their payment plan, France occupied the industrial heart of Germany, the Ruhr valley. There was a feeling that Germany had signed away its honour. This attitude gave birth and life to the Nazis and its leader, who promised dignity and purpose to the German people. The Nazis destroyed the Weimar republic and enforced a one party state and then set about a rematch of WW1.
History repeats itself you say. What bit of history are you talking about? And what is this sensible course of which you speak? Is it to lie down and get trampled by as many illegal immigrants as care to paddle across the Channel? I see from your post that you have absolutely no ideas of your own. You just want to trash anybody with a plan. Most people agree that the illegal migrants are for the most part opportunists who do not deserve to jump the queue for consideration for asylum. They clearly have plenty of money to pay for their travel but expect this host country to pay for their legal objections. They have no legal or moral high ground and neither do you.

6:
Germany is at the epi-centre of mankind's greatest risk - fascism.
To ignore that history is perilous. If you expected a debate you'll only end up getting a lecture.
Save us both the incredulity. You can do your own research, I'm sure.
Instead I'll draw a similarity that not even a Brexiteer can miss.
The Withdrawal Treaty with the EU, requires that the UK pay a hefty bill, for along period of time.
This went down bitterly with Brexiteers.
Slogans were chanted, flags were waved, names were called & even anti-EU blogs were formed.
In the end, the predicted happened - NI ended up in geopolitical limbo.
There is a feeling that UK has signed away its honour.
Talks of an indyref are not off the table yet.
This self-defeating attitude had been slowly growing, reaching a fever pitch near elections, giving birth and life to UKIP, EDL etc
We saw the rise of unexpected "leaders" who, having a casual relationship with the truth, easily rode the toxic atmosphere & general disdain for experts.
Voting laws suddenly need revising, draconian protest laws came into effect, the PM promised thousands more policemen.
Meanwhile, officials see no accountability or regard the law as not applying to them.
Having a parliamentary majority to pass any law & voters who enable them, why would they act any different?
Undeterred, the EU, in a bid to re-position from strength, decides to militarise in response to new war & the loss of a defence-capable member.
How, if ever do Brexiteers get NI back? Did you even want it in the first place?
If so why did you barter it's status? "We told you so" seems to have attached itself to almost anything regarding Brexit.
Do we cut losses & run, or drag the majority who did not vote for this, into certain war?
I don't know, only Brexiteers know what they voted for.