Germany increases its funding of Putin’s Russia - another £3.2 billion in April 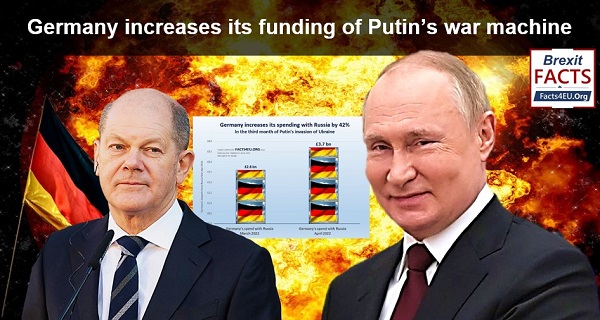 Within the latest figures released by Germany’s official statistics agency on Monday (13 June 2022), Facts4EU.Org can reveal the extraordinary increase in the monies Germany is sending to Russia each month.

These payments are a key part of President Putin’s ability to pay for his vastly expensive and illegal invasion of Ukraine.

Below we summarise the official data. We then give some context, before adding our observations at the end. 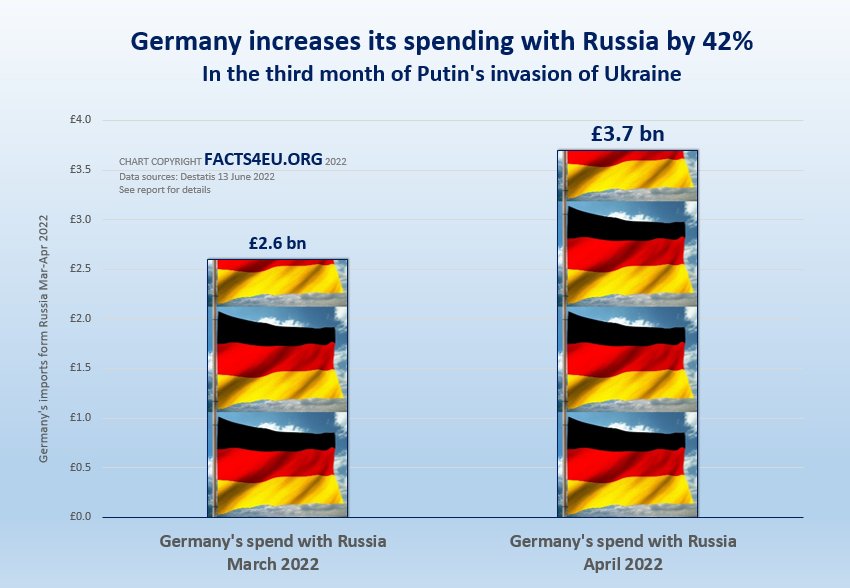 Some key increases in the month of April:

Yesterday (16 June 2022) the leaders of the EU’s top three economies finally visited Ukraine. President Scholz of Germany, President Macron of France, and Prime Minister Draghi of Italy, made a joint visit to the Ukrainian capital.

Some weeks ago it had been made clear – unofficially – by the Ukrainian President’s office that the German Chancellor was not welcome. In a typical EU fudge a triumvirate visit was then choreographed, which Ukrainian President Zelenskyy could accept yesterday.

Germany is the largest economy in the EU – by far. Without Germany, the EU would be bankrupt. It is therefore legitimate to investigate how Germany has been propping up Putin’s illegal invasion of Ukraine.

Without its spending on Russian imports, Germany’s industry and much of the country would grind to a halt. Most of the 42% increase in the money Germany sent to Russia in April was due to the increase in the price of various products such as oil and gas. However, the question must be asked:

How did Germany ever get so reliant
on a totalitarian and pariah state like Russia in the first place?

Angela Merkel was German Chancellor for 12 years. Widely popular, her legacy is now slowly being re-examined.

In her time as Chancellor, Germany abandoned its nuclear energy policy and started shutting down its existing plants. At the same time it increased its coal-fired plants. Merkel also vigorously pursued her policy of the building of a second gas pipeline from Russia, against repeated urgings from the UK and Trump’s US not to do so.

In addition, Frau Merkel presided over a government that consistently failed on an annual basis to pay any attention to its obligations to NATO and to the rest of Europe on its defence spending.

I'm so angry at ourselves for our historical failure. After Georgia, Crimea, and Donbas, we have not prepared anything that would have really deterred Putin.

The historical context of Germany’s relationship with Russia is important to understand. The Social Democrat Chancellor Willy Brandt (1969 to 1974) followed a policy of "Ostpolitik" (‘East politics’) which was designed to improve relations with Soviet Russia and Communist Eastern Europe. Brandt's successor, Helmut Schmidt, continued this theme, calling it "change through rapprochement."

This policy was then re-badged as "Wandel durch Handel," or "change through trade." It seems this longstanding policy has finally been abandoned.

The policies over many decades of the EU’s largest and most powerful country – Germany - have clearly shown a monumental misjudgement of the Russian regime’s psyche and intentions.

Despite all the warnings, Germany aligned itself with an increasingly despotic regime and became dependent on it for its energy supplies. It only suspended the opening its latest pipeline from Russia following the latest Russian invasion.

Russia under Putin has shown itself to be embarked on a path to build a new Soviet empire. We have seen this in its actions in various satellite states, then in its illegal annexation of Ukraine’s Crimea peninsular in 2014, and now in its illegal invasion of Ukraine as a whole.

The EU is increasingly promoting (and funding) its “Common Security and Defence Policy”. With its No.1 economy and most powerful member backtracking weekly on its policies of decades, it is fortunate - thanks to Brexit - that the United Kingdom will not be part of that shambles.

[ Sources: Destatis (German official statistics agency) | Twitter from former German Defence Minister | No.10 ] Politicians and journalists can contact us for details, as ever.

The Germans should be deeply ashamed.

I think people underestimate the historical connections between Germany and Russia. There was a large Russian community in Russia going back to the Middle Ages, trading and supplying technology and expertise. German generals led Russian armies against Napoleon. One Russian Empress was a German Princess who happened to marry a Tsar. Frankfurt in the 19th Century was a major financial centre for Russia. Russia and Germany closely cooperated following the Great War. Stalin was an ally of Hitler before Hitler decided to invade. In fact, if you group Germany and Russia together, you have a high-tech country with huge natural resources. Even when they are not formal partners, German manufacturing depends on Russian resources, food, and energy. Not getting those resources from Russia puts Germany and the EU more firmly under US control.
I would say that when you look at EU policies today you are not looking at some recent doubts and ambiguities, but at a partnership that keeps re-emerging, century after century. A Germany that takes really effective measures against Russia is a Germany that risks cutting its own throat, and which knows that very well.

The EU is playing very cynical games around sanctions. Today the German Government announced that their gas reserves are now over 50% full, up from 24% in February and as a result Germ,any is not so nervous about Russia cutting off supplies this winter. But the increased natural gas supplies in Germany came *from* Russia. Germany's Uniper and Italy's En continue to accept contract supplies from Russia's Gazprom, and Russia remains the third biggest gas supplier to the EU after Norway..
The EU says it is not accepting oil from Russia, but in reality Greek tankers are entering the Black Sea, loading Russian oil, which they then take through the Suez canal to India to be refined and then sold back to Europe. India used to import only 1% of its oil from Russia,but this year that has gone up by a factor of 10, and that is thanks to the EU becoming a customer for refined oil. Russian oil is still flowing into the EU, but it is taking a side-trip through India.
The war in Ukraine has been going on since February and although the UK and US, and other nations, have delivered highly effective missiles and latterly heavy artillery, German has just made promises and has delivered some very old light weapons but no modern heavy weapons. The Ukrainian Foreign Minister has said that Ukraine has simply given up waiting for Germany and is concentrating its efforts on Western countries they have a hope of getting anything from.
None of this is "Oops" or forgetfulness. It is deliberate policy.

Now is the time to stop funding Putins war by not buying any German products.
If you do then blood 🩸 will be on your hands.

Its not our war this could have been sorted by the Ukraine implementing the Minsk accords. They failed to do so and shelled the Donetsk killing 14,00 ethnic Rusians since 2014. Any patriotic leader concerned for his citizens or kin would have had to have reacted. Now Ukraine is going to find out about karma especially when the west throw them under a bus to save our economies.

6. ian hoare. You have some points, but this is a very one-sided and appeasing way to debate the issue. Ukraine was guaranteed its territorial integrity when the USSR fell and it gave up its nuclear weapons. Putin and his supporter can't just start calling parts of Ukraine "Donetsk" and have the rest of us just accept that it is no longer part of Ukraine. There are plenty of countries that have ethnic or linguistic minority areas, but that does not mean that an aggressor can come along and declare that a minority area can be taken away. That was Hitler's game at Munich, and we fell for it. We don't have to fall for it twice, and if we do, and we say that minority areas can be taken by violent neighbours, we will have wars without limit.
The valid way to put your points without supporting Putin's aggression is to say that in Ukraine, and other European countries, minority areas *exist* and cause tension. In the UK we area relatively lucky, but on the Continent they are all over the place. You don't resolve these tensions by launching aggression and then blaming the victim. You don't do that even if you think that rewarding the aggressor will lead to a more stable situation in the very long run. If tensions are to be resolved by rewarding aggression then why did we fight two World Wars and create the UN?
Ethnic and linguistic enclaves and border areas are a genuinely difficult question and they are what 20th Century European conflict has been all about. But there has to be a point where you tell an aggressor that theirs is not a special case and they have to resolve their grievance, not launch a war. And yes, ultimately it is our war because the UK is one of the three countries on which European affairs ultimately depend, and we can't just walk away.