Revealed: EU did not fully stop arms sales to Russia until 11 days ago 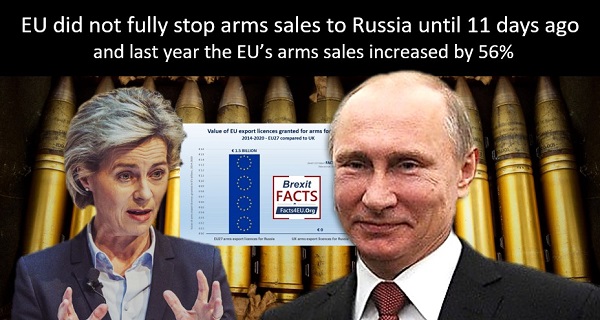 In our previous report of 25 March on EU arms sales to Russia between 2014-2020 we revealed how a clause allowed weapons contracts to continue to be fulfilled if they were signed before the embargo became effective.

Facts4EU has now learnt that the loophole was only closed 11 days ago – fully 43 days after the Russians invaded the Ukraine.

Last month we published the latest figures available – up until 2020. The sobering facts are that arms sales in 2021 actually increased by 56% over the previous year. So embarrassed is the EU that it did not include the closing of the loophole in its press statement announcing the latest (fifth) round of sanctions on Russia.

Facts4EU.Org provides the details below.

How the EU tried to cover up its shame

In early July 2014 the EU introduced an embargo on arms sales to Russia, effective on 01 August that year – giving arms dealers weeks to sign-up new deals that could then beat the embargo. 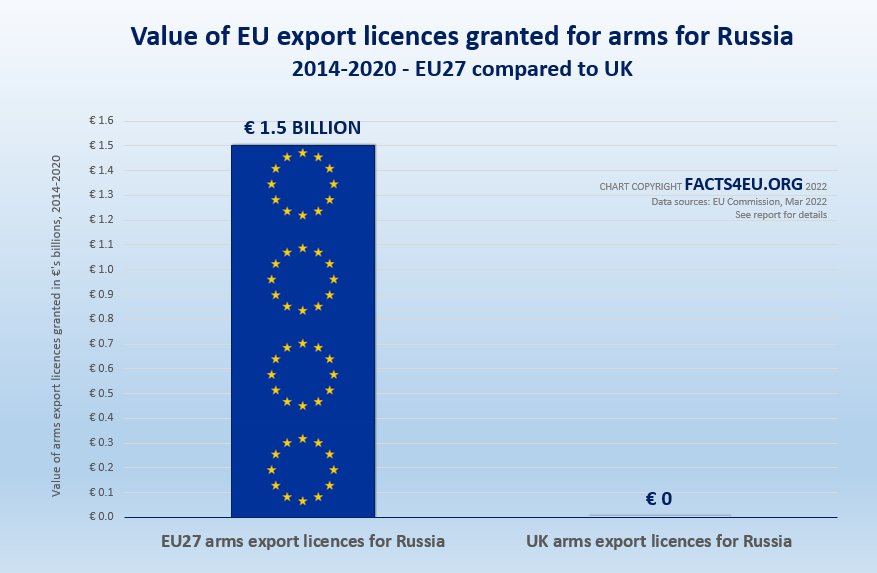 [ Sources : All of the above comes from Facts4EU’s research of the EU’s own official data. ]

“These latest sanctions were adopted following the atrocities committed by Russian armed forces in Bucha and other places under Russian occupation. The aim of our sanctions is to stop the reckless, inhuman and aggressive behaviour of the Russian troops and make clear to the decision makers in the Kremlin that their illegal aggression comes at a heavy cost.” 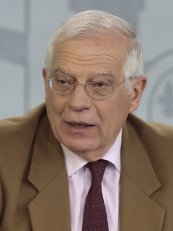 The strange case of the disappearing EU arms sales database

As part of our work, during the night we repeatedly attempted to access the EU's online database of arms exports to other countries. This is the database we analysed for our report on 24 Mar 2022. We wanted to bring readers more details of the latest figures.

Strangely, the EU's database has been inaccessible after we started compiling this report. It remains offline as we write at 5am.

The EU admits its shame by hiding its latest embargo

It took not one, not two, not three, not even four, but five – YES, FIVE – rounds of published sanctions before the EU took the brave pills and decided to close its own loophole that had allowed the sales of EU weapons and ammunition to Russia for fully 43 days after Putin’s military illegally invaded the Ukraine.

Just think about that.

While the UK did not break the embargo of 2014 at all, selling no military equipment or ammunition since that date, the EU members (especially France and also Austria) continued their sales using a loophole allowing contracts to continue if they were signed before the embargo took effect on 1 August 2014.

The loophole could have been closed immediately but it was allowed to continue because the EU Commission feared it would not get agreement. The result was the continued provision of weapons of war to Russia – weapons that could kill civilian men, women and children.

When on 11 April the EU did finally decide to pass the regulations to enforce its own ban properly it could not even find the stomach to announce its actions, as that would have given prominence to the fact the loophole had existed for EIGHT years.

This is another example where the EU has not covered itself in glory. Once again it has shown weakness and procrastination. And despite all of this it still thinks it should have an army….

Sadly, putting these reports together does not come cost free.

[ Sources: EU commission ] Politicians and journalists can contact us for details, as ever.

They have no shame. Money and control come before everything which apparently includes invasions of other countries. And, our parliaments still favour their game plan for Europe

Sounds about right for the Corrupt Eu.

Exactly what you would expect from the EU.
Show a nice smile and friendly words, while damage and manipulation goes on behind your back.
Disgusting.

Is it possible to access via wayback machine & screenshot it? Add pictures to this or create a new post.