ECJ judges can judge UK citizens, with no experience judging in their own countries

Facts4EU.Org reveals the extraordinary facts around the EU’s ‘final arbiter’ of the law 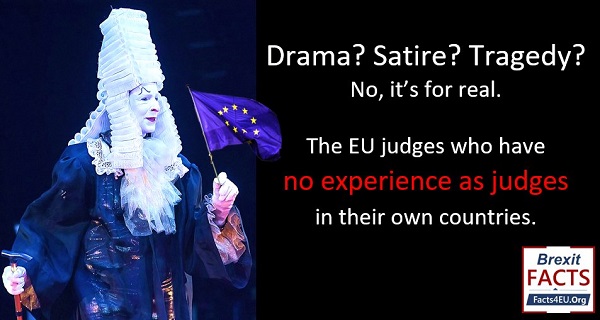 Yesterday a No.10 spokesman commented after the first week of new talks between the UK and the EU on the Northern Ireland Protocol. Downing Street made it clear that the European Court of Justice must no longer be the final arbiter on the law in Northern Ireland – a supposedly sovereign part of the United Kingdom.

In this Sunday report, Facts4EU.Org lifts the veil over the world of those who sit in Luxembourg, deciding the fate of 440m EU citizens and on the citizens of Northern Ireland.

Judging the EU’s judges – some examples

Below we show some examples of the judges who preside at the Court of Justice of the European Union (ECJ), based in the tiny EU country of Luxembourg. We must state that all the judges we looked at are clearly intelligent people and most have impressive academic qualifications. This does not, however, equate to years of experience applying the law in courtrooms, before they were appointed to the ECJ.

François Biltgen
Judge
Luxembourger - No experience as a judge in Luxembourg

NOTE: The above is only a selection. Lack of funding prevented us from doing a complete list.

These judges can invent EU law and fundamental principles, with no political oversight

Readers will be aware of the massive schism over Poland which is currently fragmenting the EU and dividing its member countries. Facts4EU.Org reported on this most recently here.

This fight is over the principle of whether the EU is a bloc of sovereign national countries, or an increasingly federalised, wannabe superstate.

The EU treaties contain no provision for the supremacy of EU law over the sovereignty of a member country’s constitution. This was attempted by the EU over 15 years ago when it drafted its failed ‘EU Constitution’, but this was subsequently rejected by those countries whose governments gave the people a referendum on the issue. (The UK government was not one of these.)

As a result, the Lisbon Treaty was born – a re-branding of the abortive ‘EU Constitution’, but without the contentious legal clauses giving the EU supremacy over a country’s constitutional status. This did not stop the ECJ, however, from bypassing the democratic process and from subsequently asserting this right.

The basics about the EU’s top court – the ECJ

Judges and advocates-general are appointed by each of the governments of the member countries, according to Article 255 of the EU Treaty (TFEU). They serve for six years, renewable by the Court, and are immune from prosecution themselves.

The ECJ is a politicised court

Put simply, the ECJ is a politicised court. It is populated by those who have lived in the EU federalist world for decades - as politicians, as academics, and as advisers to their national governments on integration.

Yes, they all have legal experience and are undoubtedly very bright, (or even the EU would not be able to accept them), but many have had no experience in their own countries 'sitting on the bench'. It might be expected that to be an ECJ judge one might be expected to have risen to the High Court or Supreme Court in one's home country. Not only is this not true in the case of the majority of judges we looked at but most do not even seem to have experience of sitting on the bench in a Magistrates Court.

And yet these are the people whom the EU Commission claim must be the sole arbiters of the law, in Northern Ireland, and in Poland and all other EU countries.

We trust that the above information will put further backbone into Boris Johnson in insisting that the ECJ must play no further role as arbiter of the law in a sovereign part of the United Kingdom.

[ Sources: CJEU | EU Commission | EU Parliament ] Politicians and journalists can contact us for details, as ever.

I find this deeply shocking. I hope that all these judges will at some point go to a dentist who has no qualification and/or experience to speak of.

But I thought the miserable remainers said our own parliaments were sovereign?

Outrageous state of affairs yet again when it comes to the toxic EU! Thank you.

The EU is a total lash up!
Jobs for the boy's and girls gives them unprecedented power.

Its about land grab, do your history