EXCLUSIVE: UK is EU27’s No.1 market in the world for services

EU refuses to grant ‘equivalency’ to UK services, but expects UK to keep buying from EU 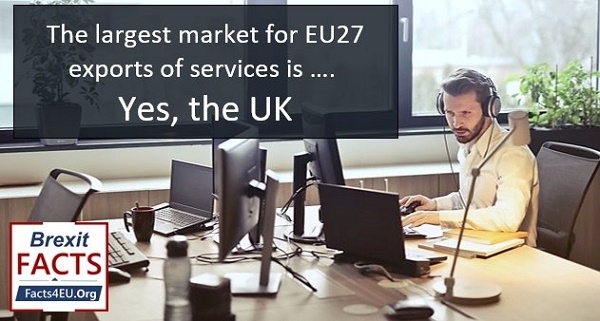 Facts4EU.Org blows the lid off the latest official export figures from the EU

Last week, virtually unreported in the UK, the EU’s statistics agency released its latest data on services - imports and exports.

The EU did its best to hide the uncomfortable facts as usual, but the largest market for EU27 exports of services is........... Yes, the UK.

This is important because the EU refused to discuss services – which represent 80% of the UK’s economy – when it negotiated with the UK on the UK-EU ‘Trade and Cooperation Agreement’ last year. The whole area of services – including the all-important banking and financial services sectors in the City of London, Edinburgh, and other centres in the UK – were specifically excluded by the EU when Michel Barnier held his marathon trade talks with Lord Frost.

Why won't the EU admit the cold, hard truth? 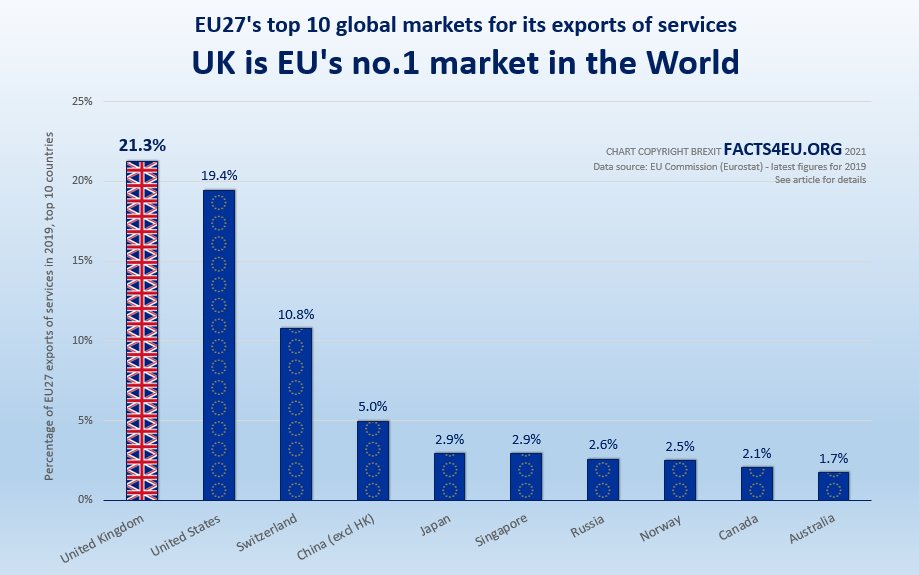 The UK is easily the EU27’s most important customer for services.
For the EU, the UK is bigger than the Arabian Gulf, Central America, South America,
Western Asia, and Africa COMBINED.

How did the EU report this news?

It will not surprise regular readers of Facts4EU.Org to learn that the EU’s presentation of its latest data for the export of services from EU27 countries was published in very different terms.

Firstly, the EU placed the US ahead of the UK in its headline. In fact the EU sells significantly more to the UK per annum than it does to the USA.

The publication by the EU Commission’s statistics agency went on:

“In 2019, the EU’s leading trade partners for services were the United States and the United Kingdom. The United States was the destination for almost a fifth (19%) of the services exported from the EU Member States and was the origin of almost a quarter (23%) of the services imported into the EU from non-member countries. The United Kingdom closely followed (21% of extra-EU exports and 18% of extra-EU imports of services), ahead of Switzerland (11%, 7%).”

The language used by the EU Commission obfuscates the simple fact that the EU27 sold more services to the UK than to any other country – including the United States. It is only by including the services which the US sold to the EU that the EU was able to make it sound as if the US was the larger market.

Facts4EU.Org interrogated the latest raw data released last week from the EU’s statistics agency to verify the facts. The UK is the EU27’s No.1 market for services – according to the EU’s own official figures.

In 2019 more than one-fifth of all the EU27’s exports of services in the world were bought by its nearest neighbour, Brexit Britain.

In light of this, it might be thought that the EU would have been keen to strike a deal with its largest customer regarding the provision of services from the EU to the UK and vice versa.

In fact the opposite happened. The United Kingdom unilaterally granted ‘equivalence’ for service providers from the EU, recognising their regulatory standards and giving them the ability to continue to sell to Brexit Britain from 01 January 2021. When it came to the EU allowing British companies to sell services in its member countries, however, the EU has singularly failed to reciprocate.

Indeed, when it comes to the area of banking and financial services – an area of great strength and not inconsiderable economic importance for the UK – it is as if the EU has gone on a war footing, eager to seize as much business from the UK as possible by refusing to grant access to its markets.

It might be argued that the EU’s approach to the UK has now gone beyond the over-active protectionism for which the EU is starting to become notorious around the world and is now entering the realms of aggressive action against its nearest neighbour.

Given this background it will be interesting to see how Lord Frost responds, now that he has taken up his new role chairing the two UK-EU committees responsible for developing the future relationship between the EU and its former member. We very much hope that he will be more robust than his predecessor, Michael Gove.

[ Sources: EU Commission official statistics agency Eurostat | No.10 statements ] Politicians and journalists can contact us for details, as ever.

Well ..... the customer should be encouraged to buy elsewhere!

I assume that No10 is looking at Brussels' behaviour like a petulant child's behaviour, waiting for the red mist to clear and common sense to be applied before deciding whether to continue in its efforts to establish a fair trading basis or focusing fully elsewhere.

I'm always amazed, but never surprised what the EU commission get up to.
They believe their alleged trading bloc (with military ambitions), can throw its weight around as they see fit, with little regard for their major customer.
THEY SHOULD NEVER BITE THE HAND THAT FEEDS THEM?
Why should we in the UK buy any EU product whilst the EU continue their childish threats. As consumers, we need only stop buying from them if that's how they wish to behave, and buy from other markets where similar product is available.
I hope others have noticed when the EU commission want more money over and above their own budget, they find a way to fine member countries using the political CJEU, yet try to keep things quiet when they breach their own rules.
It's perhaps worth thinking about scrapping the WA/PD, and absolutely scrapping the NI Protocol which divides our country and is a threat to peace.
Think about all the cars Germany wish to export to us, and so on. Yes, things work both ways, but the EU commission have proven themselves a dictatorial entity that can't get past the fact the UK left their club [by democratic means] to forge our own destiny.
The commission have also shown themselves to actively discriminate against the UK, and as WTO members they should be brought to heel - though that is a wide subject and has been covered by Facts4EU several times (see the "BREXIT INDEX" for these articles).
I call upon UK Prime Minister Johnson and Lord Frost, to correct these terrible wrongs (INCLUDING OUR EEZ), and place the EU commission firmly back in their box?
British people, as they both know, will only put up with EU commission stupidity for so long, and then we'll fight back (which Boris should have done long ago).
No country needs to be a member of the EU to trade into it, and vice versa.
I've suggested for years that EU member countries sideline the commission and trade on a bilateral basis, IF THEY WISH TO CONTINUE TRADING INTO UK MARKETS?

Through their own actions I have developed such a strong dislike for the EU that I cannot bear myself to buy anything that has a whiff of EU.
I think we need to completely cut relations with this aggressive, hostile, quarrelsome neighbour.

Delusional hubris. Apart from services - the EU is the UK's largest export partner. Not much longer.
You threw out everything else just so you can jeer at them from across the Channel for "services".? Oh, & foreigners.
Talk of boycotts is excuse for the fact that, thanks to Brexit, no one but a few can buy anything from there anymore.
Try ordering from Australia or NZ cheap per product but no use after delivery.