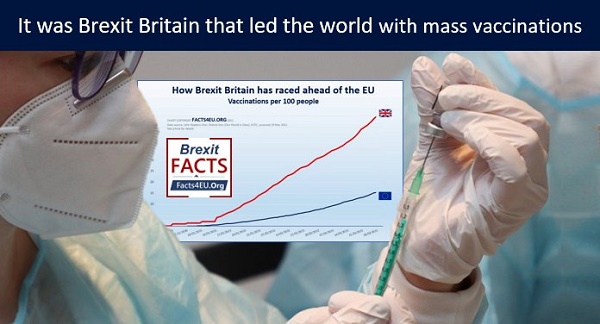 16 weeks have passed since the first person in the world was given the Pfizer Covid-19 jab as part of a mass vaccination programme. At University Hospital Coventry, 90 year old grandmother Margaret Keenan received her first dose on 08 Dec 2020 and duly went into the record books.

Since then, 34 million British people have been vaccinated with at least one dose.

The UK continues to lead all major countries in its vaccination rate per 100 people. A new milestone was reached on Sunday (28 Mar 2021) when the number of vacine doses administered per 100 people in the total population exceeded 50.

Meanwhile, EU countries still languish a long way behind Brexit Britain. Infection rates and deaths are rising in most parts of the bloc. Doctors in Paris are now threatening that hospitals will very soon be overloaded.

Why is Brexit Britain doing so much better than the EU? 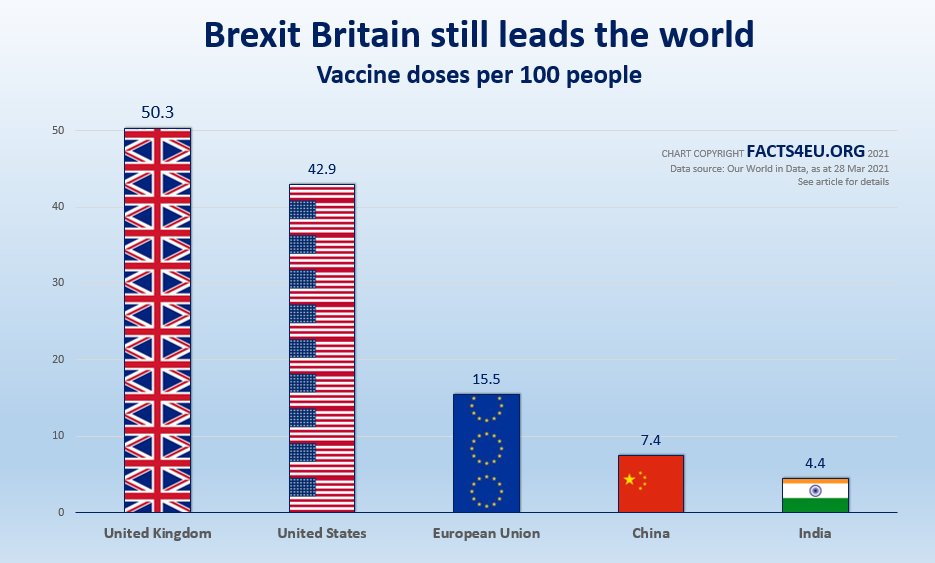 Vaccine doses administered per 100 people in the total population 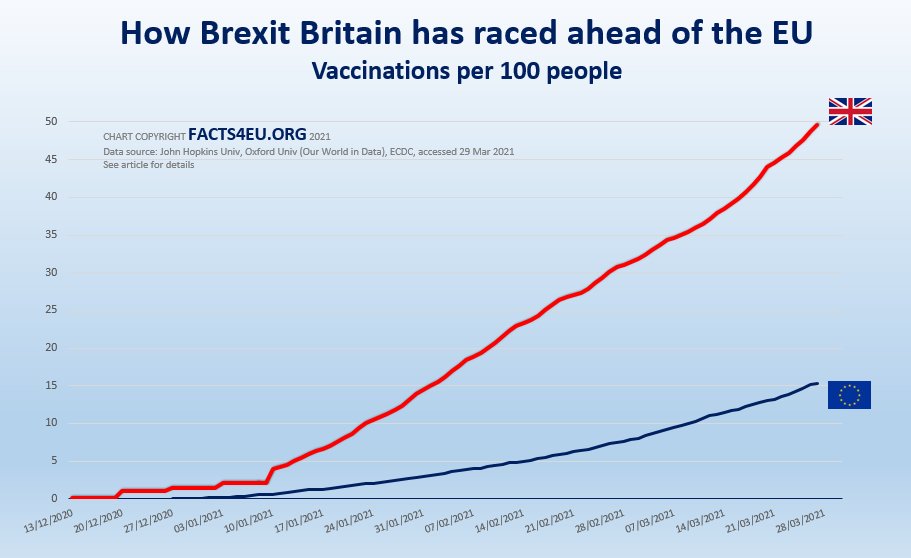 Deaths per million are plummeting in the UK, but rising in the EU

On Sunday the EU's rate (5.74 per million) was over six times the rate in Brexit Britain.

And what about that world’s-first mass Covid vaccination in Coventry last year?

The first mass Covid vaccination programme in the world started in the United Kingdom, 16 weeks ago. Thousands were vaccinated on the same day as Margaret Keenan, and this daily programme has accelerated. Brexit Britain is still ahead of all major nations, including the USA, and is so far ahead of the EU that the Brussels machine has felt forced to call in raids on supplier plants of AstraZeneca and impose what amount to export bans. This is a blatant attempt at deflection, as we have reported previously.

While the Commission continues to make “Implementing Regulations” to ban exports to the UK in an attempt to cover up its inadequacies, we must continue to point out that without UK exports to the EU of the essential ingredients to make the Pfizer vaccine administered to Margaret Keenan in the UK and to millions of others in the EU27, production in the EU would grind to a virtual standstill.

If the EU had been beating the world, the BBC would be telling us all about it every day

In recent weeks we have repeatedly been told that the UK should not ‘crow’ about its success in vaccinating compared to the EU.

There is, however, an important point to be made here. Since 2015 we at Facts4EU.Org have witnessed and have had to endure the EU’s propaganda about all manner of subjects on a daily basis. Like many readers, we have also suffered years of abuse from Remainers, and then from the (thankfully) ever-diminishing number of Remoaner-Rejoiners.

The apparatchiks in Brussels are relentless with their stream of ‘information’ and ‘news’, all of it designed to show the EU in the best possible light. Facts4EU.Org has been equally relentless in exposing the truth behind this attempted brainwashing, by researching and analysing the raw data and presenting the facts to the public.

There is nowhere for the EU to hide on this one

When it comes to the biggest crisis in the world right now – the Covid pandemic – there really is nowhere for the EU to hide. This issue (rightly or wrongly, some would argue) continues to dominate the world’s news agenda. And the EU’s performance continues to be - frankly - dismal.

The simple fact is that if the UK had accepted the EU’s request to use its agency for vaccines approvals, and had agreed to participate in the EU’s vaccine purchasing system, the UK would now be languishing in full lockdown hell.

It is important to point out that Remoaner-Rejoiners were clear that if Brexit Britain ‘went it alone’, it would be a disaster for the country. The exact opposite has been proved to be the case. Never has there been a clearer demonstration of the inadvisability of handing over a country’s sovereign power to a group of unelected bureaucrats located in the tiny country of Belgium.

Some aspects of the benefits of Brexit can be debated. Not this one. The facts speak for themselves.

We don’t crow – it’s in the UK’s interests for the EU to do much better - but Britons can hold their heads up high. And there’s absolutely nothing wrong with that.

[ Sources: Our World in Data | EU Commission ] Politicians and journalists can contact us for details, as ever.

The UK's response has been outstanding

UK Column YouTube channel posts latest News about Covid and other topics 3 times a week.
On Mondays, Wednesdays and Fridays at 1pm.
They quote government and industry documents statistics and verbal statements.
They are not afraid to question the narrative.
Always a good idea to take a wider view rather than a blinkered trust the MSM approach.
I like to see all sides of an argument before I decide.
Informed consent should be properly informed consent - not with a sprinkling of deception and obfuscation.

The EU in Brussels reminds me of that tanker stuck in the Suez Canal.

They appear to me as spoilt children, all trying to take the ball home. And our politico will let them.
They told us we were out, and they already have us half back in

The UK is a fully free & sovereign nation. Have you not seen the flags & patriots? I get why this site would like to have the UK remain in the EU - it needs donations.
This government would love us to Remain too because they can get away with anything at home while Brexiteers howl at the moon.
There are citizens who can clear up this confusion once & for all - that'll be the Brexiteers fleeing Europe.
Today, March 31st, is the deadline. As of tomorrow, those without residency permits abroad will become illegal immigrants. Or illegal expats - it's illegal either way.
That pretty much says we are not in the EU, loud & clear. There are no exceptions this time, not even British exceptionalism. It's a new thing the EU is trying, at our insistence. We chose to be treated just like everyone else.
Like the Brexiteer fishermen, one man on his way back from Spain noted, "I voted Leave but never realised it would come to this" lol. The separation from reality is astounding. This may require professional intervention - how does this guy even make it through the day as an adult?
If I seem unsympathetic it is because I am - they had a vote plus 4 years to either get an idea or to learn Spanish. Regardless, they are back, so can the patriots wave as many flags to these repatriated Brexiteers as they reluctantly make their way to a council house in a colourful, up & coming neighborhood. Imagine that, voting for Brexit in Spain, thinking you'd create a mess but be well clear of it, only to end up in council digs & on the dole.
PS: The government undoing the recklessness of silly photo-op handshakes with patients & "eat out to spread out" requires no gratitude on my behalf. Scientists are the heroes here. An inquiry after the virus settles is the democratic thing to do, if democracy is still alive.
.

Will you be slapping the UK on the back when the figures of the numerous side effects and DEATHS start to emerge? I wonder.

Now Merkel and Macron have gone running off to Putin for his Sputnik jab the EU are really under pressure. Where is the unity now? What are the smaller countries to do?
Facts4euOrg For your troubles, I have made another donation.
Have a wonderful Easter Weekend all.

If democracy is still alive..? Where have you been.? What do you read? What planet do you orbit?
The eu putting pressure on sovereign nations to enact the 90 day rule, when Britain cannot deport depraved criminals.
If Britain had leaders they would not let sovereign subjects be treated so poorly.
And you the mighty who aid deliverence of this new world before you understood the old, repent.

Nos 2 and 6: Totally agree. UK Column very informative. Don't be in a hurry to take one of the jabs, you may well regret it. Do you know what's in them? Is one of the side effects given include 'deaths', because it should do. They are all in the Experimental stage, with long term effects not known for another two years. Why would you, when 99.8% recover if Covid is caught? Why are the figures and details of side effects of taking vaccines not published in the UK? Look up the EU's list; frightening.
And why the big push by Tony Blair and our Government: for full vaccination followed by issuing a Health Passport? Blair tried to bring this in when he was PM over 20 years ago, and he was stopped. The misnamed 'Passport' can be used to track where you go, all your details. NOT a chance you'll be allowed to travel abroad; The Green policy Boris is advocating in his booming Build Back Better does not include aircraft supposedly polluting the skies. Just remember, Boris' promises don't materialise.

Despite all the anti vax buffoons on here I can assure all I have had my two jabs, no side effects apart from increased confidence that I won't die of covid.