UK's Great Escape - Facts4EU.Org looks at the EU’s inexorable takeover of a continent

The European Union: The World’s most expansionist empire, in maps and charts 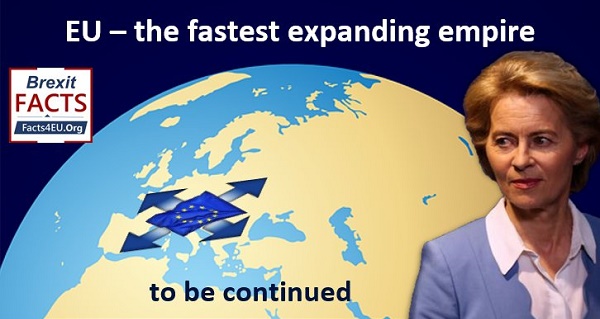 Despite the loss of its 2nd-largest member country, the EU’s expansionist march seems relentless

In just 64 years, the EU has expanded beyond recognition. It started quietly as the European Economic Community (EEC) which was founded by six countries in 1957 with the Treaty of Rome.

Sixteen years passed before its first expansion in 1973 when it increased its number of countries by 50%. Since then its acquisitive nature has gathered pace and become more apparent.

Today Brexit Facts4EU.Org tells the story of the World’s most expansionist empire, in simple maps, charts, and facts and figures.

In this three-part series we ask: Is the EU now the most dangerous world threat to individual nationhood, cultural identity, personal freedoms, and the established global order?

How much has the EEC/EU expanded so far? 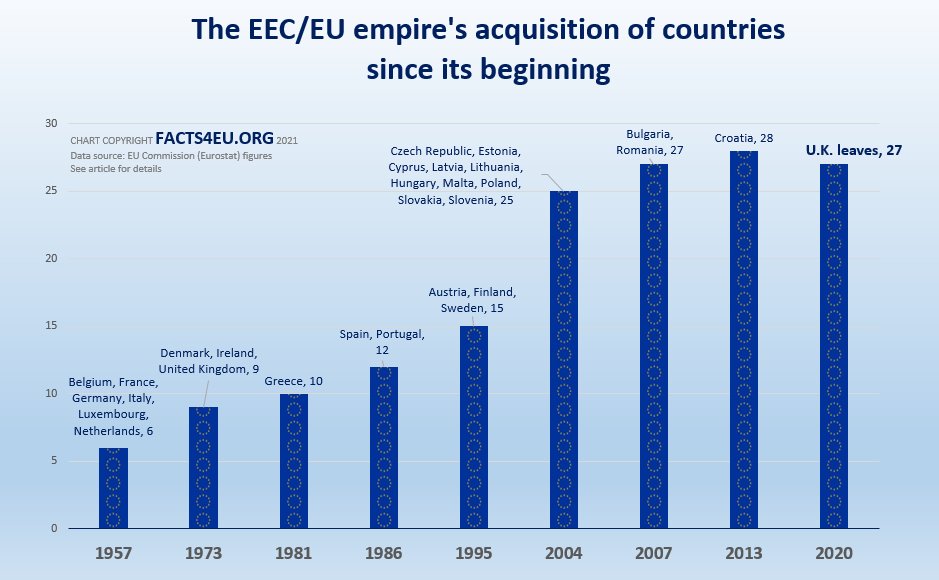 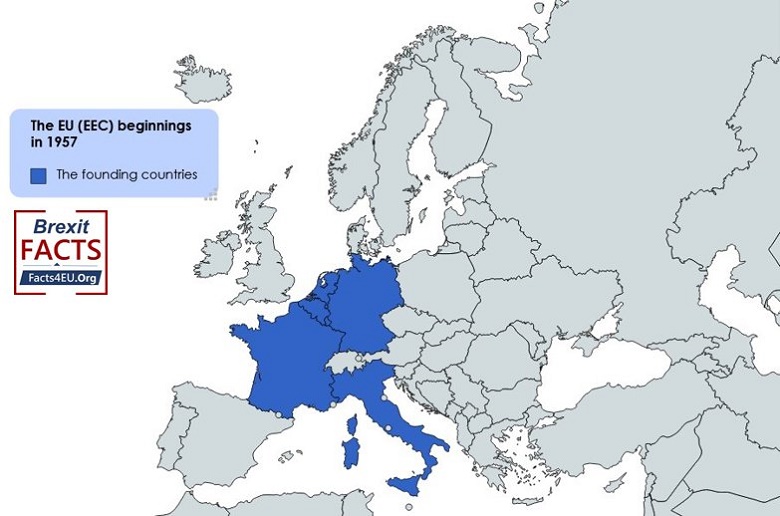 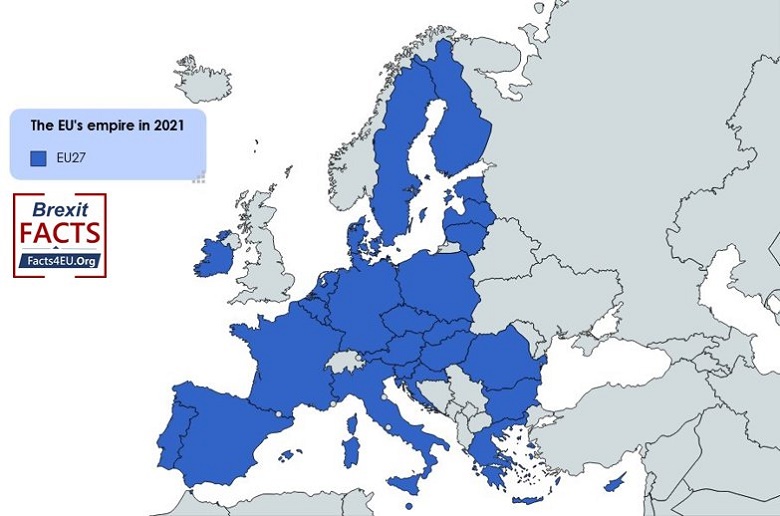 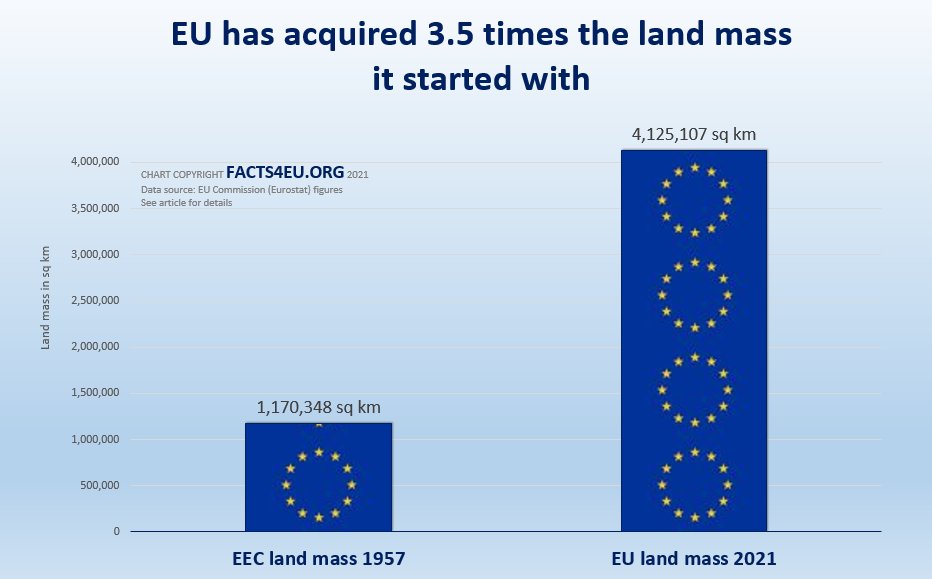 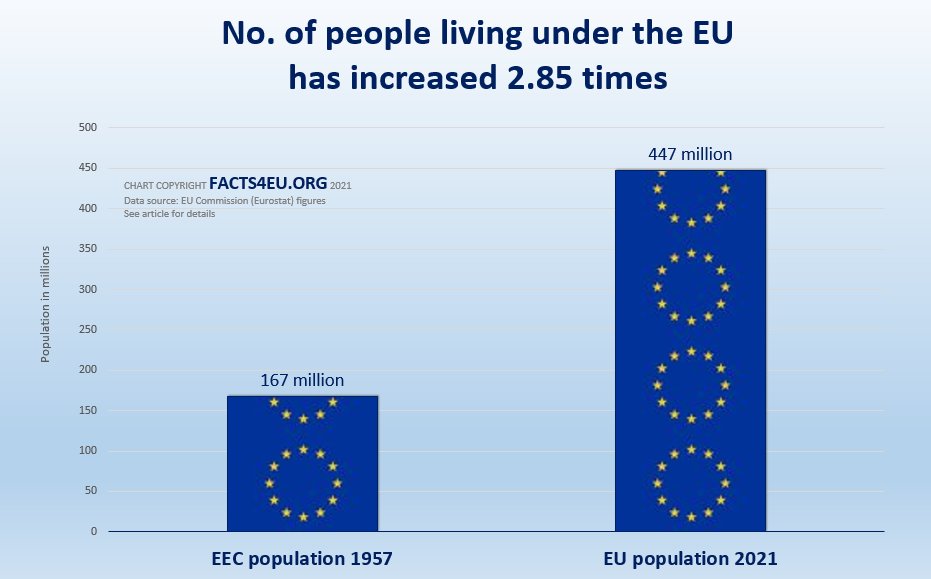 By any measure, and despite the EU’s loss of the United Kingdom, the EEC/EU’s expansion over the past 50 years has been continuous and significant.

Which new member countries does the EU have in its sights?

If these seven countries all join, then our maps above would look like this 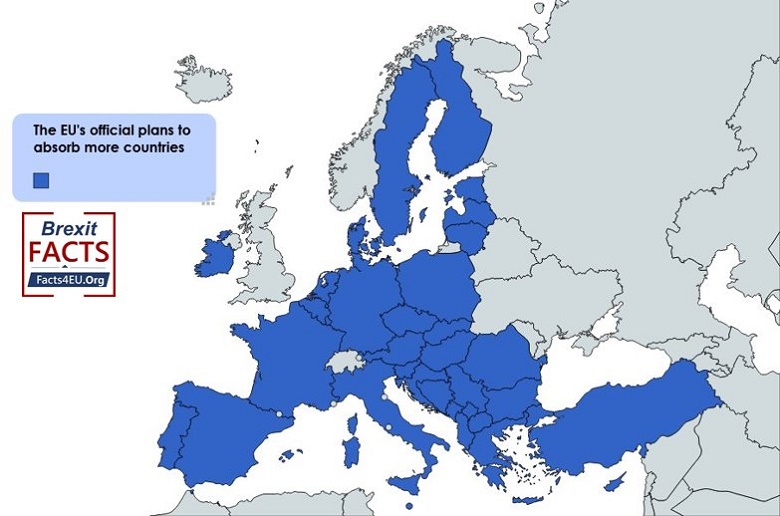 In this series of Facts4EU.Org reports we are looking at the EU as an empire. Given the increasing centralisation of power in Brussels and the large increase in areas of life controlled by the EU Commission, this seems perfectly appropriate.

It is official EU policy to absorb the Balkans countries and Turkey, as the next phase of the EU's expansion. In our view it doesn't matter whether a country such as Turkey is likely to join in the next few years or not. The fact is that this is EU policy and Turkish government policy. In any case it seems highly likely that some of the Balkan countries will start joining around 2025.

In Part Two Facts4EU.Org will look at the EU’s acquisition of political and other powers over the citizens in its empire. We also intend to question the democratic legitimacy of this whole exercise in empire building.

[ Sources: EU Commission | World Bank | OECD ] Politicians and journalists can contact us for details, as ever.

Get us 100% removed from the EU Dictators control and influence.
If we don't finish the job they will take us down with them.

'Is the EU now the most dangerous world threat to individual nationhood, cultural identity, personal freedoms, and the established global order?'
-
Not any more. That threat is the New World Order. Almost all nation states and all political leaders are following that coordinated agenda - countries and their people are now subservient to the globalist elite. We are fast transitioning to a totalitarian One-World government.

This gives me the shivers

I am certainly no apologist for the EU far from it, but.......
I think you are reaching with this one, it’s not like they are grabbing the land mass by for force each country that joins does under free will. As long as it’s done legitimately I do not really care
Well sort of as the UK didn’t have a referendum upon joining the EEC.

It was always about German domination of the continent !

The more poor countries that join, the weaker it becomes.
France and Germany won’t like to pay for everything
Turkey would be fined every 2 minutes for failing to conform.
Italy, Poland and Hungary are already considering leaving, so I think the infighting will get worse.
But we need to fully leave. We haven’t we are tied up with too many rules dictating how we do business. NI is suffering and we need it sorted.

Not the most dangerous world threat- 2 James Bertram. The rise of Islam is-once Muslims come into a country and rise in numbers they will take it over as their Ideology demands.
Probably 55 million Muslims now living in the current EU adding countries such as Turkey, Kosovo, Albania, et al will more than double that figure of 55 million, and the possibility of thousands more arriving every day. This is without doubt from all that I have studied for over 10 years, our biggest threat to or way of life, Christian values will be replaced by Sharia Law. Muslims are already in high positions of power in the UK. No matter what Muslims will never fully integrate into our society, insurmountable differences bewteen Western and Muslim culture will not encourage such.

Significant that all the new countries will almost certainly be recipients, not net contributors. When Eastern European states joined in 2004, the EU boasted they would all become net contributors after 5 years. We know how that prediction turned out. As Andrew says above, taking in these countries will weaken the EU, and it is already in decline economically.
The problem is, while protectionism is a boon to French agriculture and German industry, it stifles competition and EU27 companies can't compete with the more dynamic rest of world. Only 2 EU27 companies are in the biggest 50 in the world by market capitalization in 2021 (statista.com). Where are the EU27 Amazon, Tencent, Tesla, Ali Baba, JP Morgan, Samsung? They are none and there won't be any coming along anytime soon.

I believe EU will break up. Most countries in Europe believe in freedom. EU could survive if it was radically altered and return to the original concept returning power to the individuial states

Captain Thunderbolt , Thursday, July 29, 2021, 13:13: Has a good point.
Anyone know how many member nations had an electorate referendum/vote on joining the EU?