England (or the UK) versus Italy – the wider picture

Whatever the result tomorrow, what kind of country will the Italians be going home to? 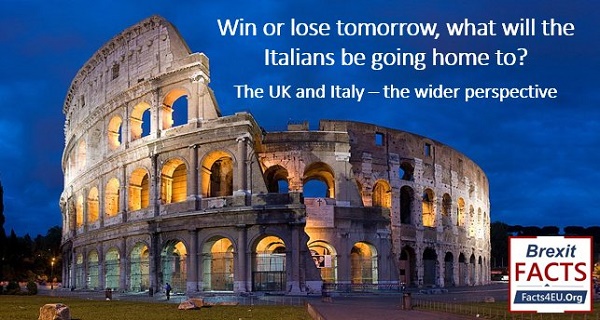 Brexit Facts4EU.Org looks at some key facts about the Italians’ ‘dolce vita’ back home

Unlike EU Commission President Ursula von der Leyen, the entire Facts4EU.Org team will be enthusiastically supporting England in tomorrow’s final of the (albeit ridiculously-named) Euros 2020 football tournament. We haven't yet heard from Nicola Sturgeon today, but it would not surprise us if she were to join Frau von der Leyen in backing Italy.

Whatever the result, the Italian team will be returning home after the final. But what kind of country will they be going back to? We looked at the latest data available from the Organisation for Economic Co-operation and Development (OECD) and compared Italy with the United Kingdom.

We chose the OECD partly because they were one of the organisations which the Remainer government of David Cameron used to back their completely discredited ‘Project Fear’ campaign before the UK’s EU Referendum. We also chose the OECD because – although its remit is global – it is based in Paris and in our opinion it has a distinctly pro-EU and anti-UK bias.

NOTE: The OECD rightly treats the United Kingdom as one country and does not report separate data for England.
All charts below show the latest data available from the OECD since 2011 - 10 years ago.

If England win tomorrow, what are the employment prospects for the Italian manager if he is forced to look for another job? Okay, perhaps not the best example, but what about the average Italian living in England who decides he or she can’t take the euphoria surrounding an England victory and decides to up sticks and go back home?

2. The economy, GDP per capita, and average wages

Next we looked at the economic size of the two countries and how it has changed in the last 10 years. We also show below the GDP per capita and the level of average earnings.

Finally we looked at the relative size of the UK and Italy in terms of population. We also looked at the trends for the proportion of young and elderly people in the populations as a whole.

Percentage of under 15s

Percentage of 65 and over

Every metric above shows just how Italy has suffered as a member of the EU and of the Eurozone in particular. The United Kingdom, in staying out of the Euro and in choosing to leave the EU is flourishing by comparison. Technocratic, unelected governments imposed on Italy from Brussels have hardly helped. This is a tragedy for a country with such rich history.

All the Facts4EU.Org team love Italy and one of us even spent a lot of time working there. Since the United Kingdom’s departure, Italy has become the third-largest country in the EU by population and economic size, and its performance is therefore essential to the bloc’s overall prosperity.

Whilst its economy has essentially flat-lined in real terms since the turn of the century and it faces dire levels of debt, Italy nonetheless has other qualities which endear it to many British people. It has a well-deserved international reputation for its cuisine, fashion, art, musical pedigree, and its overall contribution to western civilisation. Its northern half also contains some of the world’s largest companies, such as Fiat, Generali Group, and ENI.

“Football is a game of two halves”

It was once memorably said that “football is a game of two halves”. Now that so many games seem to involve two further halves of extra time and then penalty shoot-outs, we are not sure this is entirely true, but if it were then the same description could be applied to Italy.

Italy’s northern half is business-like, industrialised, and effectively the wealth generator, whilst the southern half can feel like another world. This is a problem the country has been struggling with for a very long time and we doubt it will change.

As we approach the full-time whistle on this article we will say one thing. Even if Italy wins tomorrow, we will all ultimately get over it. And it will be impossible not to keep on loving the Italians. Fortunately this is not something we need to think about too much, because of course England are going to win…….

[ Sources: OECD ] Politicians and journalists can contact us for details, as ever.

A superb demonstration of why we're better off out. Italy's a lovely country which I've taken my family to many times but under the EU it's lurched from crisis to crisis for years. Joining the euro was a disaster for them.
Just like your team we love Italy but we're supporting England all the way tomorrow!