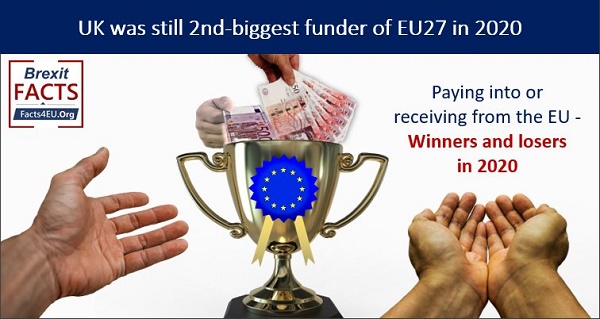 Who paid what to the EU last year? The UK still paid the EU more than all except Germany

Last month the EU Commission issued its accounts for contributions in 2020, unreported by the BBC. Despite the UK 'leaving' in January last year, the British public might be shocked to learn that the UK was still the second-largest funder of the EU, according to the EU Commission’s official figures.

In today’s report the Brexit Facts4EU.Org think-tank lifts the lid on the United Kingdom’s continued massive bankrolling of the EU last year, in spite of ostensibly having left in January 2020.

Five years on, and the UK still keeps paying billions to Brussels

The British people voted to leave the European Union in June 2016, over five years ago. After years of turmoil due to the Remainer government of Mrs May and an anti-democratic, Remainer backlash in Parliament, the pro-Brexit government of Boris Johnson was finally elected in December 2019, which was more representative of the country at large.

This led to a formal separation from the EU on 31 January 2020 with the signing by Prime Minister Johnson of the EU Withdrawal Treaty (including the Northern Ireland Protocol) and the Political Declaration. Nevertheless, the United Kingdom continued to pay into the EU’s bank accounts – and will do so for more than 50 years to come.

Today we can reveal just how much the UK continued to subsidise the EU’s coffers last year, compared to all the EU27 countries.

Statistical note: These figures come from the EU Commission’s latest financial spreadsheets, issued last month. The net figures include budget contributions and receipts, as well as the customs duties which the EU Commission takes for goods imported from outside the EU. The figures do NOT include the sums which the UK has been paying into the EU’s ‘off-the-books’ funds (see below). 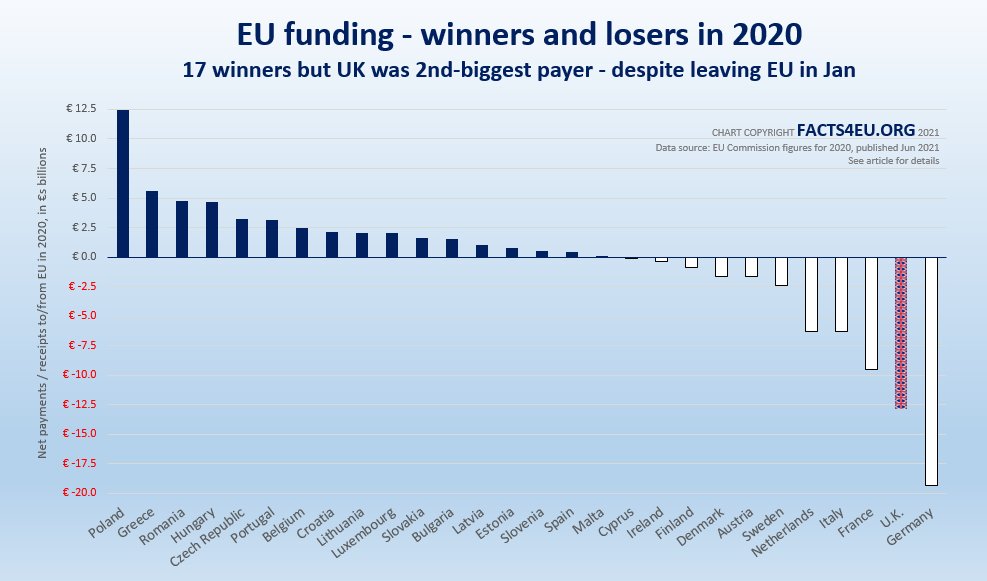 Why are we still paying the EU for anything at all?

When you leave a golf club, you are expected to settle up your bar bill. What you are not expected to do is to pay for improvements to the clubhouse due to take place in the coming years, just because you were a member when the Committee decided on this idea.

The EU has never once, in five years, been able to produce a single legal argument for the ‘divorce bill’ it imposed on the UK. The EU Treaties do not mention this in any way. When a select committee of the House of Lords – one of the most unreconstructed, arch-Remainer institutions in the country – reviewed this matter they found there was no justification for a divorce bill whatsoever.

For last year, when the Prime Minister supposedly and finally “got Brexit done”, the UK’s total gross contributions to the EU, including customs tariffs, are listed at €19,709.4 million. That’s €19.7 billion, or £17.0 billion pounds. The net figure, after deducting the small part of our money that came back, is listed as €12,882.7 million. That’s €12.9 billion, or £11.1 billion pounds.

As we pointed out in our report on Wednesday, many British people now wrongly assume that as Boris “got Brexit done” in January last year, the UK has no longer been paying annual contributions to the EU from that date. Unfortunately this is not the case.

As a result of Theresa May’s weak and appeasing negotiations with the EU, she agreed to the completely unjustified ‘Divorce Bill’.

Under that agreement the United Kingdom will continue to pay monies to the EU for another 53 years until the year 2064. 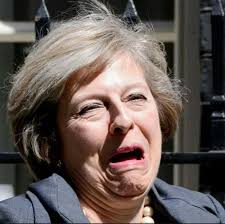 A significant proportion of these will be paid by 2028, although this is not yet certain as no set amount has yet been agreed. The EU Commission has recently increased its bill by a casual £3 billion and although the Government has said that it “doesn’t recognise the figures” it seems inevitable that the UK will end up paying, as the deal is adjudicated by the EU’s own judges sitting in the EU Court of Justice (CJEU) in Luxembourg.

The Remainer rump in the UK will no doubt dismiss our report as they always do, despite it being based on analysis of figures from the EU Commission itself. They will probably also say that we were still full paying members of the EU for the entirety of last year. This is true, but we doubt that all of the British public are fully aware of this.

What Remainers will find it hard to argue, however, is the fact that the UK finally and formally left the European Union on 01 January this year and yet we will continue to pay tens of billions of pounds to the EU spread over the next 53 years.

The other big question for Remainers is what it has always been. Why should UK taxpayers have been subsidising EU countries for the duration of our 48-year membership, improving their infrastructure, subsidising their farmers, and in effect transferring part of our wealth on an annual basis to other EU countries? When was this ever made clear to voters?

We should advise them that all payments are on temporary hold until we have treaties resolved.

2. Michael James. Wouldn’t that be something. WTO, no more payments to the EU, leave ECHR influence and get Northern Ireland back into the U.K. Unfortunately we live in the real world where our prime minister calls the EU his friends.

Enough is enough, no more.

Is this just an excuse to bin the withdrawal agreement ?
Why would U.K. government agree to all of this if it’s so bad ?
I fully support Brexit but seems like the Gov has messed this up! Or do they have a cunning plan?