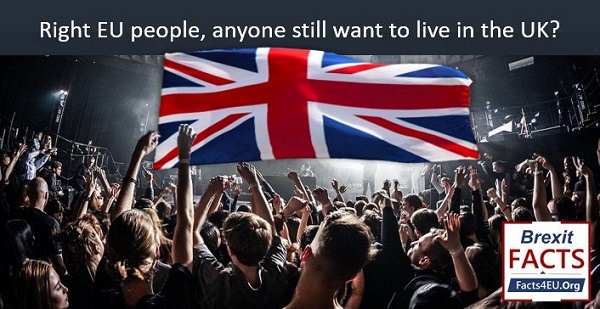 “EU27 citizens living in UK: 3.6 million,” says EU, yet OVER 5 MILLION have already applied to stay

Today Brexit Facts4EU.Org exposes the fake news we have been fed by the EU for so many years.

For years – since before the EU Referendum – Brexit Facts4EU.Org warned about the quality of official data reported by the EU’s official statistics agency on some important subjects. One such subject was immigration, where we repeatedly stated that we felt the number of EU citizens living in the United Kingdom was consistently and grossly understated, and that the number of British citizens living in the EU was consistently and grossly overstated.

In the end, the EU can’t hide over 5 million of its people wanting to stay in the UK 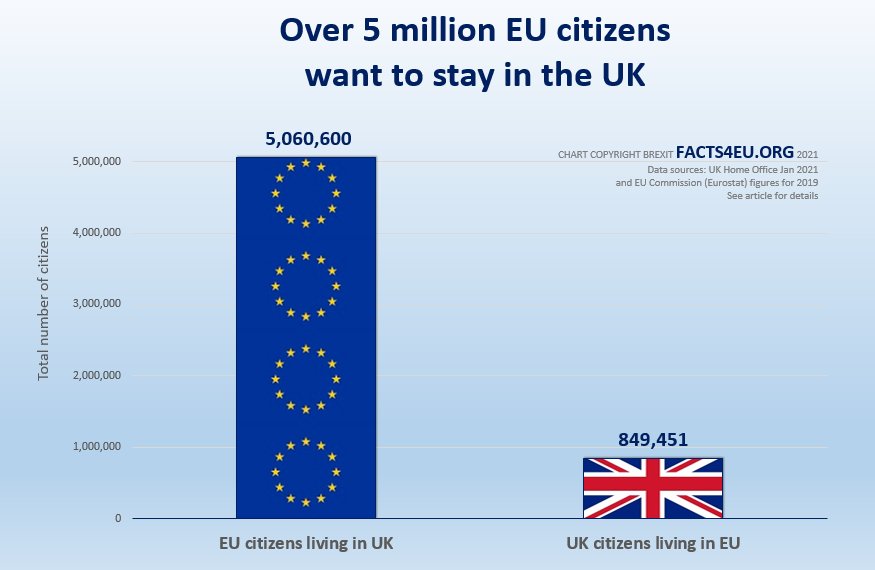 On Thursday (11 Feb 2021) the UK Home Office released the official data for the applications that have been made by EU27 nationals already resident in the UK to acquire ‘settled status’ after Brexit. In effect this allows them and their family members the right to settle in the United Kingdom, and in many cases these rights exceed those of nationals of non-EU countries.

Brexit Facts4EU.Org has now analysed the latest UK Home Office data and it shows what we have always maintained. The Remainers’ claim of “3 million EU citizens in the UK” was vastly understated and the true number is in fact more that 5 million.

Please note that the figure of 5,060,600 relates purely to those EU citizens living in the UK who have applied for residency status. It does not include those who have yet to apply. We believe this number will grow still further in the remaining five months before the deadline for applications is reached at the end of June.

Total number of applications by nation as of 31 January 2021

UK citizens living in the EU has been consistently overstated

We can also reveal that the Remainers’ claim of “1.5 million UK citizens living in the EU” countries was equally false. This was dramatically overstated. The latest figures from the EU Commission show that only 849,451 UK citizens are resident in EU countries. (Nb This does not include Malta and Cyprus, which do not report these figures.)

Readers are familiar with the stream of propaganda of all types and on all subjects emanating from the EU and from Remainer-Rejoiners in the United Kingdom. Many of the claims that have been made are wildly inaccurate and they were often based on no facts at all.

In the past five years we have researched tens of thousands of official facts from the EU Commission, from EU member countries, and from the UK Government, to rebut all the outlandish claims.

Our report above is another in the long line of revelations we have published over the years. The truth is that far more EU citizens made their homes in the UK than was ever admitted by the EU or by British politicians. Five million, and counting. And the latest data for British citizens living in the EU is less than 850,000 – far less than has repeatedly been claimed.

We are pleased to be able to set the record straight.

If you believe in a fully-free, independent, and sovereign United Kingdom, and want to see the full benefits of Brexit being delivered, please make a donation now. It’s quick, secure, and confidential, and you can use one of the links below or you can use our Donations page here. You will receive a personal, friendly ‘thank you’ from a member of our team within 24 hours. Thank you so much if you can help to keep us going.

[ Sources: UK Home Office | EU Commission official statistics agency ] Politicians and journalists can contact us for details, as ever.

no wonder the country is so overcrowded, seems not only are our government unable to keep tabs on all the people arriving in the UK but the countrys they come from are deceitful or incompetant at checking how many leave their homelands. So much for boarder checks, pritti patel needs to pull her finger out.

Strange. We were also told that all EU citizens will go home in a huff if we voted to leave and there will be nobody left to do the things that we're apparently are incapable of, like doing our plumbing, or picking fruits-and vegetables or nursing tasks. It seems like we might be okay still.

What a silly article - again. A friend of mine is Danish. I say he’s Danish because he was actually born in Denmark. But he has lived in the UK since he was 4. He’s now nearly 50.
He moved here as a kid - before the single market existed, before the ECC became the EU. But he never got a British passport. He didn’t need one. His Danish passport was fine. He married a British girl, had two children, both British. Worked and paid taxes here his whole life.
But he has to apply for settled status because the Brexit nuts threatened to kick him out of his home. There are many people like my friend.
What we really need to do is to have a scheme for elderly Brexit backing racists to apply to stay. We really would benefit from deporting them -maybe to Ascension Island. These people who think they are patriots are mostly dimwitted bigots and we don’t want them here.

If 5 million EU citizens are give right to vote if we have another referendum on leaving the EU we may well lose. This is why Johnson needs to finalise leaving the EU once and for all! There can be no going back!

Buster, what exatly is your Danish friend's problem? (Or yours, if he's an imaginary one you just made up for dramatic purposes).
I'm an EU citizen and already did my application, no problem. 'Your friend' shouldn't have any probs either unless there's something dodgy.

Michael Burnhill, Do you really think in your wildest dreams that the EU will still be in operation when another referendum is offered? The EU will implode sooner rather than later. We're lucky to have these hard-working ex-EU citizens who have committed to accompanying us on our journey to the sunny uplands.

Do you trust our government or the EU because I don't

Hang on, why does it folllow that, because EU citizens in the UK have been UNDER-estimated, that UK citizens in the EU have been OVER-estimated? There is no logic to that statement. Surely, logically, BOTH figures are under-estimates, if one of them is, and they have used similar methods to estimate both figures?

Must be dire in the EU with all these people wishing to stay here. Proof leaving was in UKs interest.