The EU’s biggest losers, as the ‘Treasure Island’ Brits choose to buy ‘non-EU’ 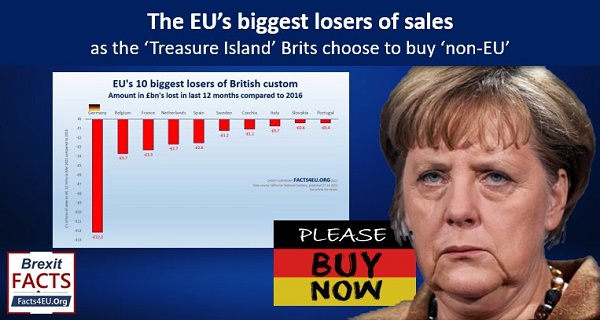 Are we seeing the consequences of the EU Commission’s anti-British actions over Brexit?

Following our revelations in yesterday’s (Saturday’s) edition of Facts4EU.Org that the British people are buying £28bn less from the EU than in the Referendum year of 2016, today we reveal which countries are the biggest losers in the fight for British consumers. Our analysis comes from detailed figures released on Tuesday by the Office for National Statistics.

Not surprisingly, in monetary terms Germany comes out as the biggest loser, followed by Belgium, France, the Netherlands, and Spain. 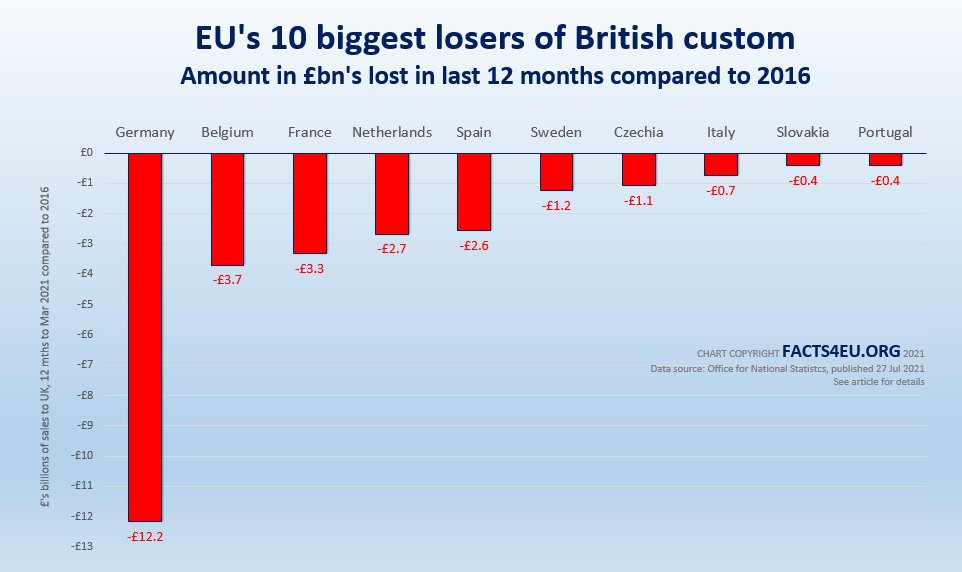 This is not a ‘Covid effect’, nor is it because of new border controls

Facts4EU.Org has analysed the detailed figures published by the Office for National Statistics last week and looked at what British customers are buying from all countries around the world – not only the EU.

When it comes to the very latest data for Q1 2021, compared to the same quarter in 2016, British customers have bought 16.3% more from the rest of the world, as our chart showed yesterday.

The EU’s biggest losers by drop in percentage of sales

As the EU’s largest economy, it is not surprising that Germany has lost most in terms of financial totals. If an EU country sells more, it loses more if there is a trend away from buying from EU countries.

The actual totals in pounds can therefore disguise the impact on individual countries. Below we show the percentage drop in sales to British customers from the top 10 worst affected EU countries. 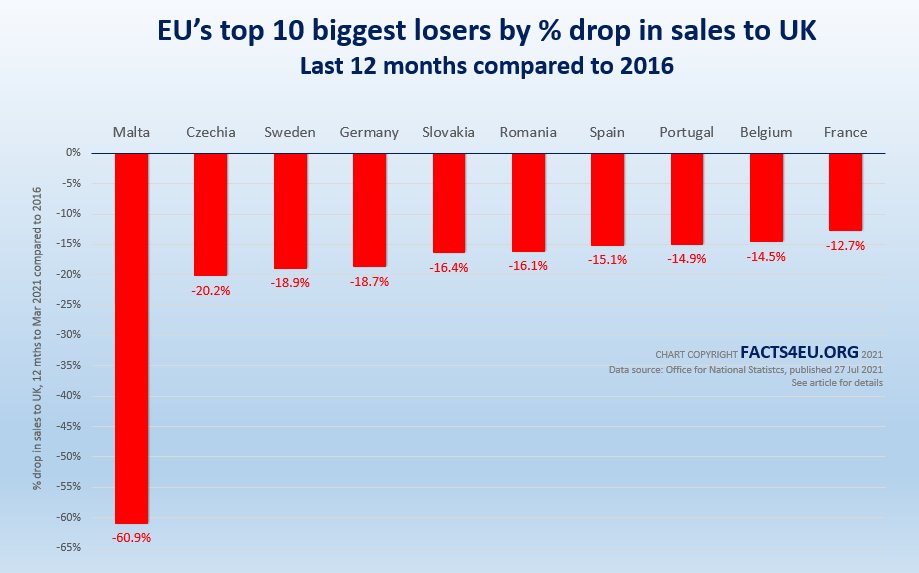 Our report above was given excellent coverage in an article in the Daily Express.

In our report yesterday, Facts4EU.Org predicted that Remainers would confuse imports with exports in their attempts to explain away the drop in the EU’s sales to the UK. Remainers did not disappoint. Time and again yesterday we saw comments saying “What do you expect? We are now a third country so the EU must impose border and customs controls. This is all the fault of Brexit.”

As we tried to explain to them in advance in our report yesterday, (which few seem to have actually read before commenting), we are reporting on sales INTO the United Kingdom. These sales are relatively unaffected by Brexit.

The problems at the borders have all been about UK exports, not EU imports. These have been caused by the over-zealous actions of the EU and its customs authorities in allowing UK goods going to the EU. Goods flowing the other way – from the EU into the UK – have continued to flow thanks to the UK deciding to operate a ‘light touch’ customs operation with the EU.

To the best of our knowledge, no EU trucks have been impounded in the UK due to a French lorry driver having a half-eaten ‘baguette jambon’ in his cab. This is not the case with the EU, sadly. Last week the Chairman of Marks & Spencer described how an M&S lorry had been impounded in the Republic of Ireland because their driver had a ham sandwich in his cab. The driver was then forced to complete hundreds of pages of EU forms by Irish customs officials before being allowed in.

As we wrote yesterday, any move by British people and businesses to buy less from EU27 companies has nothing to do with the British public’s views about the citizens of EU27 countries. If there is a trend away from buying from EU27 companies, we suggest that attention be focused on Brussels and the fanatical ideologues who reside and work there.

The actions of the EU autocrats over the past five years appears to be having an impact – even on those who voted Remain in 2016.

Before the EU Referendum and in the five years since, the British public has been fed the narrative that “we can’t survive on our own, we’re too small to compete.”

What utter tosh. Today the United Kingdom is the fifth largest economy in the World according to the IMF. Who wouldn’t be queuing up to sell to us? We represent a massive market for global producers. We are home to the world’s international business language. We have the most powerful financial hub in Europe. English Common Law is widely respected around the world for the protections it gives and the efficiency it provides in doing business.

And - is if all that weren’t enough - we have the most fecund Prime Minister in the world, sporting the world’s worst haircut. What’s not to like?

[ Sources: Office for National Statistics trade figures, 27 Jul 2021 ] Politicians and journalists can contact us for details, as ever.

Good to see people are voting with their feet/purses

Took a long time to happen but long may it continue.

I actively avoid German and French products. I buy British where I can!

I refuse to buy anything from the Republic of Ireland

absolutely laughed at that last sentence. Great article - keep it up!

It is funny how - with really minimal effort in a supermarket - you can find alternatives to EU products that you used to buy every week without thought.

I do feel for the ordinary people of the EU, who are generally decent hard working folk. They are taking the “hit” and it’s all because of the ludicrous behaviour and decision making by narcissistic individuals like Macron and Merkel.

The Remainer response to this is, small businesses in the EU have been faced with new customs charges and bureaucracy which makes it uneconomic to sell to UK customers.
It is therefore not that Brits are choosing to buy elsewhere, but that they have been forced to, due to EU sellers being unwilling to sell to them. This will have increased prices to the UK also.
What do you say to that?

Keep it going..buy British when you can..