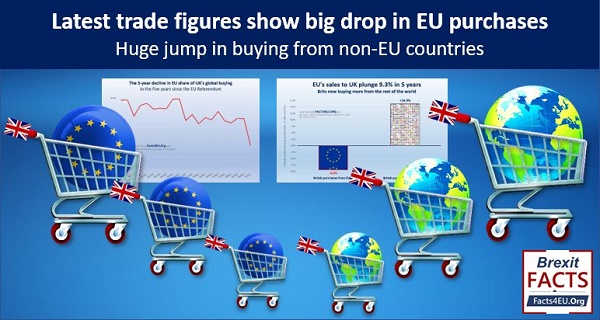 Facts4EU.Org provides proof that Brits are preferring to buy from the Rest of the World

Our analysis of the latest trade figures released by the Office for National Statistics on Tuesday (27 Jul 2021) reveals extraordinary, official evidence that the British are switching their buying preferences emphatically away from the EU and towards the rest of the world.

We compared the last quarter’s results (Jan-Mar 2021) with the same quarter five years ago, just before the UK’s referendum on EU membership when the majority of the British people voted to leave. We also looked at the five-year trend. 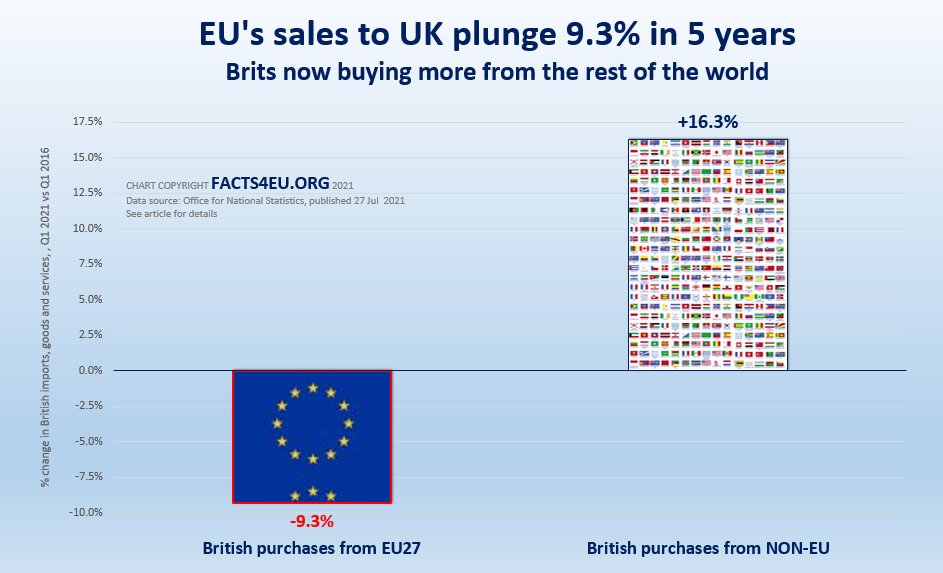 Next we looked at UK purchases of international goods and services and where they came from. 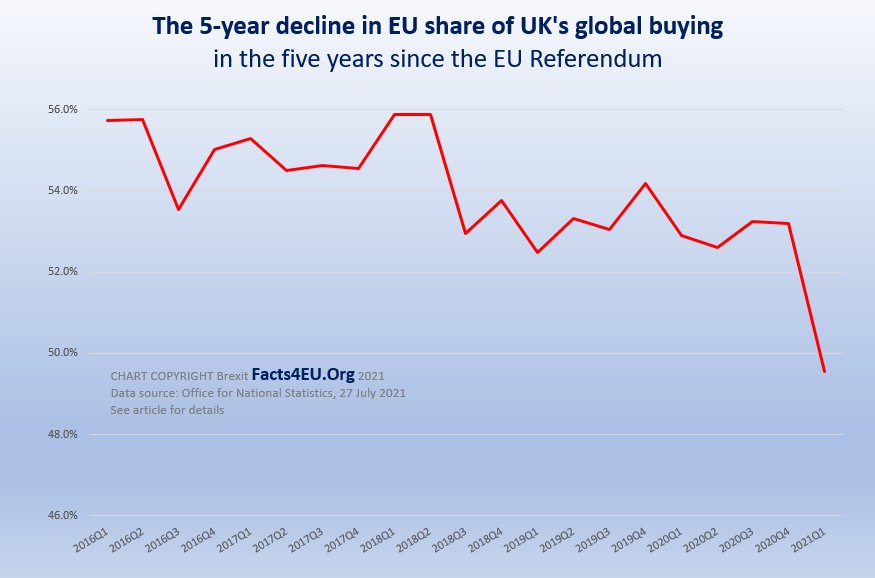 Our report above was covered in an article in the Daily Express on Sunday 01 Aug.

For years there has been a growing backlash against the EU. Even many of those who voted Remain in 2016 have been shocked by the EU’s bullying and unreasonable behaviour towards the United Kingdom.

We have observed an increasing number of people on social media advocating that we should ‘buy British’ first, from Commonwealth countries second, and from the rest of the world third. The EU is now seen as the last choice for many people – and even some of those would rather do without, than benefit the EU.

Above we have shown clear evidence from the official source – the ONS – that the EU’s sales to the UK are falling, both in percentage and in real terms. And these are not small numbers. In the last 12 months alone the EU has lost sales totalling £27.8bn, compared to 2016.

What will Remainers say?

As ever, Remainers will try to deflect. They might start by talking about the Covid effect. This is nonsense of course, because the whole world is suffering under this and overall we are looking at the percentage swing in favour of purchases from non-EU countries. The EU is significantly down in the first quarter following our full departure on 01 January, whereas the rest of the world has risen dramatically.

Remainers might then confuse exports and imports, and say that EU sales to the UK are down because of new Brexit controls. Again this is nonsense. It is the EU that has imposed absurd and restrictive controls at its borders which have impacted UK sales to the bloc. By contrast the UK has adopted a ‘light touch’ on the EU27’s sales into the UK, almost waving them through our borders.

Our analysis and report is about what Brexit Britain is buying from abroad and the figures do not look good for the EU.

No. Years of abusive behaviour by the EU towards the UK is bound to damage consumer opinion when it comes to making purchasing decisions. Why buy from a source of constant hostility, when there are excellent indigenous suppliers and alternatives from friendly countries around the world?

To our readers in the EU27 we would just say this. We have no observed no signs of hostility from the British people towards the citizens of EU27 countries. The ‘beef’, as we say, isn’t with you. The beef is with the appalling way the United Kingdom has been treated – in particular by the EU Commission and EU parliament. If you felt bullied and treated like a non-voting colony, how would you react when choosing between a UK product and one from the EU27?

The winners and the losers – which countries have lost most in sales to their former ‘Treasure Island’? We present the dramatic results. Not to be missed!

Most of our readers are well-informed and appreciate our fact-based articles, presented in a way you won't see anywhere else. If you value reports like the one above - and further report to come tomorrow - please help our work with a donation. We have far more to do in researching, publishing, campaigning and lobbying Parliament than we have in terms of the financial resources to fulfil these tasks. We badly need funding to continue - we rely 100% on public donations from readers like you. We are a 'not for profit' team (we make a loss) and any donation goes towards the actual work, not plush London offices, lunch or taxi expenses, or other luxuries of some organisations. Nor do we ask you for further donations if you donate once - we just hope that you keep supporting us. Your donation stays anonymous unless you tell us otherwise.

[ Sources: UK's Office for National Statistics trade release, 27 Jul 2021 ] Politicians and journalists can contact us for details, as ever.

So cross with myself, bought some onions and found they were from Spain. Been avoiding everything i can if not from UK

This will only accelerate if the EU imposes tariffs on our products as they have been saying when they meet at the G7 . When will the EU get it into their heads that free markets work on price and customers will follow the lower prices from outside the EU.

"We have no observed no signs of hostility from the British people towards the citizens of EU27 countries. The ‘beef’, as we say, isn’t with you. The beef is with the appalling way the United Kingdom has been treated – in particular by the EU Commission and EU parliament."
Quite right and it needs to be said. I just hope the people are allowed to hear the message above the propaganda from the EU machine. I have my doubts.

Great and long may it continue. The icing on the cake would be if we can convince those turncoats mainly residing in the South East to switch cars from EU ie principly French and German built to non EU ie the rest.

My last four cars have been German but the behaviour of the EU has weighted the decision about the next one strongly against that continuing.

Comment 6, Trevor, I agree. Reluctantly any major purchase like a new car is unlikely to come from the EU until the Commission start behaving normally.

We check always purchases before buying. Discard anything from the EU. Enjoy excellent wine from many other countries outside European Project. Concerned about the China tidal wave. Finding the tiny label that is hidden when the promotion on the web allows say 'English Woollens'. We need to tighten adverts and wording to make our UK strong.

I switched to Malbec from Argentina, it’s so much better than the stuff from France too.

Great idea. Let’s buy expensive stuff with lower standards from the other side of the planet instead of from our nearest neighbours.
Why not declare war on them while we’re at it?