Since the EU Referendum, jobs are up, wages are up – only Project Fear is down 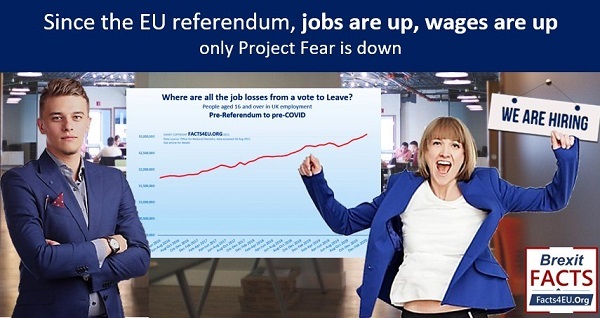 Just over five years ago, millions of British people in jobs gritted their teeth and voted to leave the European Union. They did so in the face of official forecasts from the then Chancellor, pro-EU Remainer George Osborne and his pro-Remain Treasury Department that over half a million of them would almost immediately lose their jobs if they voted Leave.

Here is a screengrab we took at the time of the BBC's coverage of this.

Above: The BBC's then economics editor reporting on the Chancellor's and Prime Minister's dire forecasts of job losses, 2016, © BBC

The reality has of course turned out to be very different

Facts4EU.Org has analysed the latest employment and earnings data released by the Office for National Statistics this month. Below we once again put the architects of the state-sponsored Project Fear propaganda to the sword and ask when they will be brought to account. 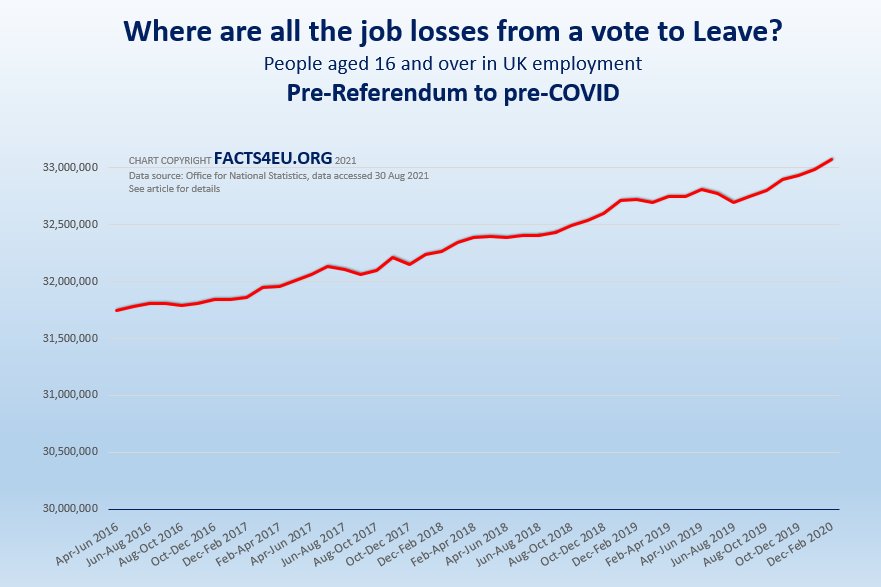 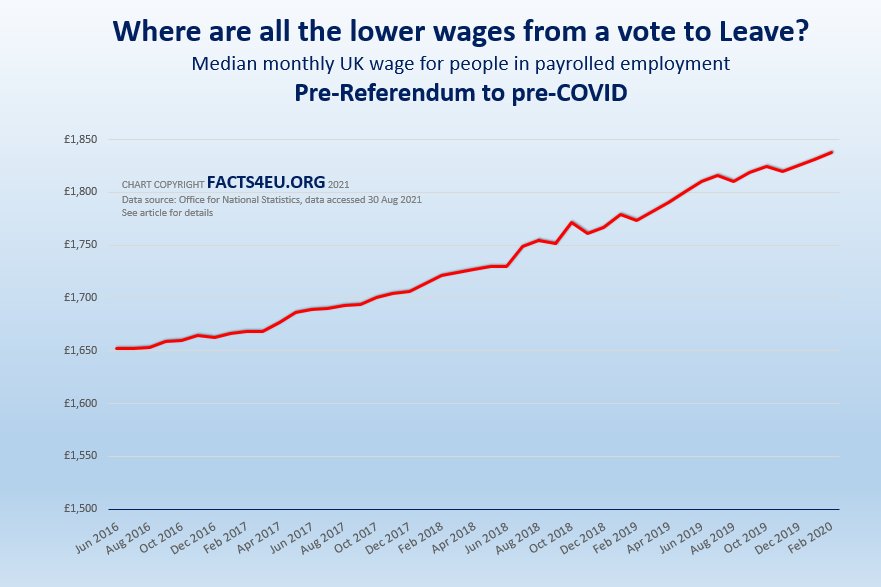 What happened when COVID-19 hit?

From February 2020 onwards the COVID-19 crisis and the measures taken by Government have had a dramatic effect on the UK economy, as they have on economies worldwide.

Facts4EU.Org’s charts above show what happened from when the British people voted to leave the European Union to the start of the COVID crisis. But what happened to jobs and wages after that?

This fight was - and is - about freedom

In 2016 the state-backed Remain campaign decided that the way to guarantee a Remain victory in the EU Referendum was to scare the living daylights out of people. They concentrated on economic arguments, and produced official Government forecasts (as well as forecasts from any international body they could persuade) showing massive job losses, economic hardship, and all manner of other things.

Facts4EU.Org has always argued that the 52%-48% win for the Leave campaign would have been more than 60%-40% without the fear factor induced by the Government and others, leaving people worried about their jobs and their livelihoods.

As it was, the Remain campaign failed to realise that for a great many people the key issue was sovereignty and the ability to act as a free and independent country again. A country with its own laws, border controls, taxes, foreign policy, and social policies. A sufficient number of people looked at the Government’s dire forecasts of economic Armageddon if they voted Leave and in true British Bulldog fashion said “we want our freedom, no matter the cost”.

In Brexit Britain, jobs are up, wages are up, and Project Fear is down

Above, Facts4EU.Org has once again put to the sword the absurd and apocalyptic threats from David Cameron, George Osborne, and the entire UK and global Establishment which were lined up to intimidate the British people.

In Brexit Britain, jobs are up, wages are up, and the majority of the country is now looking ahead to a bright future. Surely it really is now time for the dwindling (but highly vocal) number of pro-EU politicians and campaigners to stop putting down their own country and apply their energies to something positive instead? And is it not time for some of the worst propagandists for the EU to apologise for misleading the British public in such an egregious way?

Facts4EU.Org can't carry on without you

If you value reports like the one above, please help our work with a donation. We have far more to do in researching, publishing, campaigning and lobbying Parliament than we have in terms of the financial resources to fulfil these tasks. We badly need funding to continue. We rely 100% on public donations from readers like you.

[ Sources: UK Office for National Statistics, suite of reports produced on 17 Aug 2021 ] Politicians and journalists can contact us for details, as ever.

Now that was a lovely start to my day! Thank you so much for all your hard work on this.

This is being even more keenly felt in working class areas like mine in Co. Durham. For example, ever since the 00s, when FoM immigration from Eastern Europe started, working people couldn't complain about pay or conditions because there was a permanent queue of cheap labour standing outside the door. This is exactly how my father described the 1960s to me. He said working people were paid just enough to live on, and no more, because every boss knew replacing a worker was easy.
Another example, I work for a supermarket. Our drivers were paid fairly prior to 2021 but rival supermarkets recently began offering even better pay and conditions, as well as golden handshakes. Many of our drivers started talking about moving en masse to a rival supermarket. Top management got wind of it and made them all an offer they couldn't refuse within 48 hours. They were given a pay rise of several thousand pounds, a one-off bonus payment, extra holidays and overtime was increased from +50% of hourly rate to +100% or double-rate.
For workers in their 30s/40s, they've never seen anything like this in their lifetimes. It's a sad fact that most people I went to school with enjoyed a better life in the 90s than their children enjoyed in the 00s.

Worth looking back to the pre-referendum scaremongering speech that George Osbourne gave, with David Cameron at his side back in May 2016.
Osbourne stated if the Referendum Vote (note, "the vote") went in favour of Brexit it would lead to a loss of half a million jobs across the UK. Whereas in fact after the vote the number of people employed across the country continued to steadily rise, till some three years later the number in work reached an all time high.
Both also predicted that a leave vote would have a dire affect on the economy and lead to a recession; a brief review of the FTSE 100, 250 and 350 for the three year period after the vote tells a different story.
Fortunately Osbourne's scaremongering, all part of 'Project Fear', fooled only the most gullible.

@Michael White - it's definitely worth noting and remembering. I feel strongly that Osbourne and Cameron's plan was to threaten ordinary people to try to browbeat them into voting remain. Over the years, in Co. Durham, I've found very few remain voters who believe in the EU, those who I have met, had no strong opinion on EU membership but voted remain because they feared what the govt told them about the economy.
Now their lies have been proven wrong, I can see that remainers never cared about British jobs and workers because they still want a return to FoM and the cheap labour that would reverse pay rises.

It is like Goebbels in the bunker reading Facts 4 EU. Brexit is crashing all around you and you are spewing out propaganda believed only by extremist fools. It’s really quite sad. But also funny.

Nope, my daughter is having to fork out hundreds of pounds in visa costs for her year abroad in an EU country - after your lot PROMISED there would be ZERO downsides to Brexit. I’ve not got any pay rise and my husband has been made redundant. You charlatans can eff off, I’m voting for whatever party is for rejoining.

Wow, it takes a special kind of lying to misrepresent the reality like this.
Would you mind giving us the rest of the numbers? Stuff like the UK companies shedding jobs or shutting down because they can't make money exporting to the EU, the £1 trillion of city of London assets moving overseas, taking their jobs with them? The shutting of the car plants that were planning to re-tool, but have decided they can't work in the UK and have moved to remain in the EU? The inflation? And, and, and.
I think you need to do some reading, instead of trying to pretend there are benefits from Brexit. Try to find us actual real benefits, we're all still waiting.

I am in tears reading this, tears of laughter, that is, at this very inventive, delusional version of events that make the Brexit farce look like its good for this country, when at this point only people either making a fortune out of it, dont actually live here or can't think straight still think so

The only reason there are more jobs is that many EU have left because of the hostile environment you and vote leave facilitated. Ironically they have left us with the positions which are hardest to fill.
So nobody can now say the our EU friends are stealing UK jobs.
Congratulationss on making the UK a nasty fascist little state.