Another huge EU project where the EU will once again lag far behind the UK?

Yesterday the EU Commission and the ECB backed a digital euro 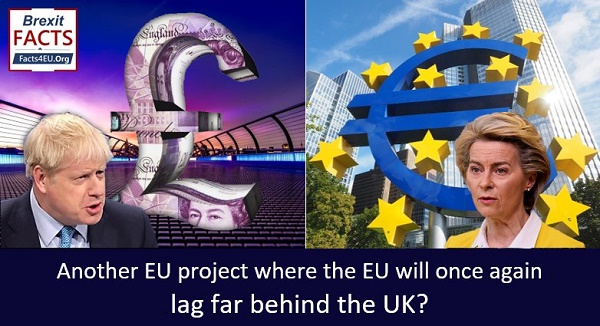 But like the EU’s vaccination programme will it be unfit for purpose, too little, and too late?

Yesterday the EU gave more details on its plans for a digital currency. All governments, including the British Government, will inevitably establish a Central Bank Digital Currency. The question is: Who will do it first and set the global standard?

The Eurogroup finance ministers met yesterday and it was confirmed that both the 'European Central Bank' (ECB) and the EU Commission support the idea of a digital Euro.

The Eurogroup and the ECB

One of the EU’s countless presidents is the President of the Eurogroup, Paschal Donohoe of Ireland, pictured left.

The President of the European Central Bank is the frenchwoman, Christine Lagarde, pictured right 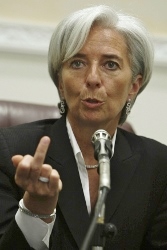 Here is what the EU Commission said yesterday

“The Commission supports the exploration of a digital euro project that Christine Lagarde presented to the Eurogroup this morning. This is a potentially important element of a strong and innovative digital finance sector and more efficient and resilient payment systems. A digital euro could also support broader policy objectives: the digitalisation of our economy; open strategic autonomy; and strengthening the international role of the euro

“The ECB's consultation on this topic has helped make clear what matters for citizens and firms, starting with privacy and security. It has brought home that a digital euro implies both opportunities and risks, which need to be carefully taken into account as we move forward. That's why the Commission is engaged in very close cooperation with the ECB at technical level on this project.

“We need to understand better, just to mention a few examples:

This is going to happen – one way or the other

In some form a digital central bank currency is inevitable in major economies. It won’t replace the cash in your pocket but it will be used in many other ways. The questions revolve around its scope, how it will be implemented and controlled, and its practical effect on people in their daily lives. The finance professionals in the City and elsewhere will have other considerations, but in the end a digital currency will require public acceptance.

China is already developing its own digital renmimbi/yuan for launch next year. The Peoples Bank of China and the Chinese Government will then have access to total knowledge of all digital yuan transactions anywhere in China or indeed anywhere in the world where a digital yuan transaction is involved. This would establish a Chinese system of introduction of digital currency. 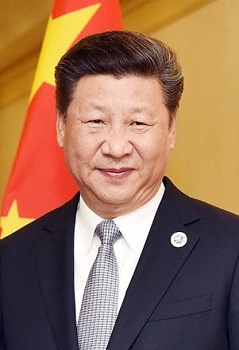 Will the nimbler Bank of England beat the EU to it?

The Bank of England now has an opportunity for ‘first mover advantage’ amongst western economies.

The vaccination programme in the EU has shown up the stark contrast between the efficiency of the United Kingdom and the drawn-out and cumbersome processes which dog the EU. It has taken the EU’s Central Bank six months just to publish the results of its ‘public consultation’ on a digital currency, which began in October last year.

Facts4EU.Org spoke to Professor Daniel Hodson, Chairman of the CityUnited Project, rapidly becoming the most important think-tank on City and financial services issues. He told us: 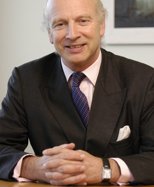 “I welcome your report. The UK has the technical expertise and the fleetness of foot to establish a western standard for Central Bank Digital Currencies, incorporating all the safeguards for personal privacy which people would expect, and for other key stakeholders.

“It’s now for the BoE and City institutions to embrace this, set the standards, move ahead rapidly, and gain first mover advantage.”

The lumbering EU compared to the nimble UK

The ECB says it will take another two years before it will have any concrete proposals for its digital currency, which will then have to be discussed and agreed with the 19 governments of the EU member states which have adopted the euro as their currency. Who knows how long that will take?

By then China’s digital currency will be up and running. The question is whether the Bank of England and the City can match the Chinese, and develop and set a global standard for all western countries.

We have no doubt that the UK can once again lead the EU – and little doubt that we can lead the rest of the western world – on this.

Finally, we will shortly be publishing a simple “Bluffer’s Guide to a Digital Currency”, answering questions which ordinary people might have.

A Central Bank Digital Currency is going to be in the news more and more. But have you heard a word from the BBC about this?

[ Sources: EU Commission | European Central Bank | CCP ] Politicians and journalists can contact us for details, as ever.

I already have advanced orders of Britcoin,The strongest most versatile digital currency of the century.

The Euro is a currency based on an idea not gold reserves or any other tangible resource,digitising it will give it credence if the other states accept the idea,which is no good!

Once again, the UK sets the standards for the EU to follow.

Ohh, magic money from nowhere with nothing to back it up. Nice trick if the people of Europe are stupid enough to fall for it. Time for mass EXITS.

The EUgammons will be waiting for their handlers to tell them what to say about this.

So we will be in a totally-controlled society. I do not share your enthusiasm. I see why the government wants to bring in an electronic passport and that they will continue this fraudulent epidemic until they have done so.