EU Parliament plans for new EU taxes from 01 January, and for all rebates to be abolished 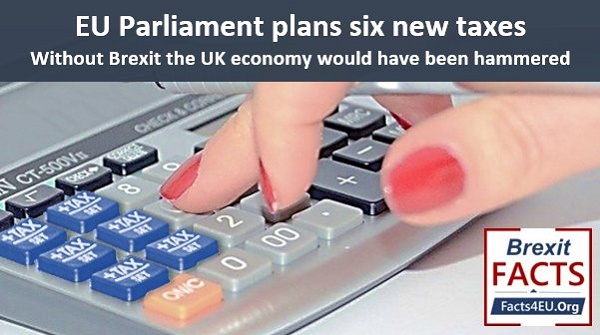 Without Brexit, the UK economy would have been hammered under the latest plans

Yesterday the EU Parliament summarised its position on new and additional funding for the EU. It involves the introduction of six new EU-level taxes, as well as removing the rebates enjoyed by some countries. If the UK were still a full member of the EU this would have resulted in an increase of some 50% in the UK’s annual contributions to the EU.

These proposals were all originally made prior to the COVID crisis, but the plans are now being justified as being a solution to the massive need for funding as a result of the EU’s new financial mechanisms to deal with these commitments.

The EU Parliament’s grab for more money for the EU

Taxes go up and rebates get abolished

Finally, there is a complete removal of the rebates on contributions enjoyed by some countries. Last year the UK’s rebate was £4.5bn, so the UK’s net contributions to the EU would rise by approximately this level if the UK were still a member. 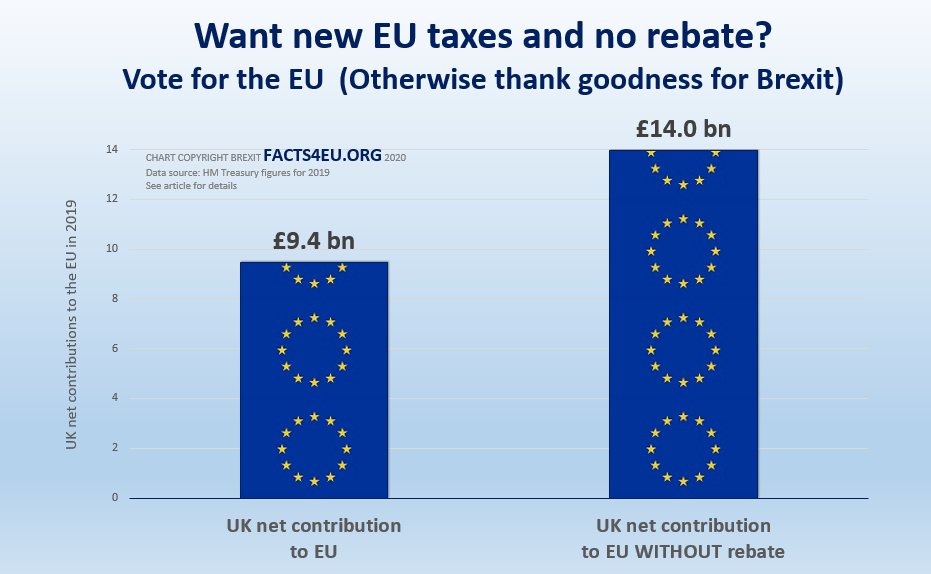 “MEPs also insist on the abolition of all rebates.”

In 2019 according to HM Treasury and the House of Commons Library, the UK's net contribution to the EU was £9.44bn. In fact it was higher, as a result of the "off-budget" payments to the EU which never appear in their summaries. Nevertheless we have shown that the official figure would rise by 48% to £13.96bn without the UK's rebate.

The EU Parliament has couched the new taxes in ways which disguise the fact that member countries and their citizens will end up paying more. Under the above measures, the cost of doing business in the EU will rise. Ultimately this has a direct effect on all citizens.

To describe these new taxation revenue streams as “genuine new own resources” appears to come from the ‘money grows on (carbon-neutral) trees’ school of thinking.

The EU is not only spending, it is now having to borrow for the first time

The EU Parliament’s legislative resolution also gives permission for the EU Commission to borrow on the world markets for the first time, thereby setting a dangerous precedent. Here is the opening statement:-

“(1a) This Decision provides the legal basis for the Commission to borrow funds on the capital markets in order to finance expenditure in the framework of the Next Generation EU Recovery Package.”

When most prudent households find themselves in difficult economic times they tighten their belts. Not so the EU.

Four years ago when faced with a large shortfall in income as a result of losing the UK’s annual contribution, did the EU scale back on its expenditures? No, it just kept on spending. The EU then simply came up with the idea of a “Divorce Bill” which was shockingly agreed to by Theresa May and her government. 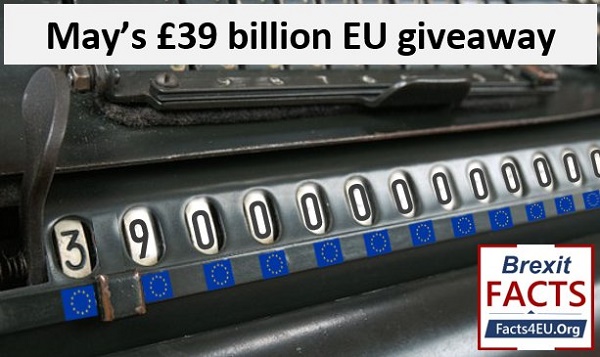 Today, faced with the double whammy of the loss of the “Bank of the UK” and the astronomical costs of the EU’s COVID measures, the EU Parliament’s solution is to tax more widely and deeply.

The EU Parliament is not, of course, the ultimate decision-maker. These things involve the EU Council and the EU Commission too. All we can say is that the Commission always wants to extend its reach and the globalist leaders of most of the EU member states believe in the gradual creation of a superstate of ‘Europe’.

Thanks to Brexit, the UK will not be facing a huge increase in its annual contribution for future years of membership of this sclerotic organisation. This would have happened - without Brexit - if the EU abolishes all rebates, as we have shown in our chart above.

Instead the UK taxpayer will merely be paying out huge sums which have no basis in international law for the EU’s contrived “Divorce Bill”.

That said, some of the new taxes described above will affect British companies who wish to trade with the EU, as well as those from other countries around the world. Taxes 3, 4, and 5 in our list above will almost certainly affect non-EU businesses.

It’s important when reading a report such as the one above to state that the British public did actually vote for Brexit and we will be leaving. The Remain side have been fond of saying "Yes, but no-one ever voted for a particular type of Brexit." However - and as we pointed out many times during the debate - no-one on the Remain side ever admitted that no-one knew what voting Remain would mean. What type of EU would we remain in? Our report clearly shows one very expensive example of this.

One way or the other Great Britain will finally be leaving the Customs Union and Single Market on 31 December 2020. Very sadly we will be leaving Northern Ireland behind, as things currently stand. We don't yet know the precise terms of our departure, and we can only and sincerely hope that the Government will remain resolute and true to their words. If they don’t they will not be forgiven by a great many millions of voters.

To quote the Rt Hon the Baroness Thatcher from a different era, 32 years ago:

"We have not successfully rolled back the frontiers of the state in Britain, only to see them reimposed at a European level, with a European super-state exercising a new dominance from Brussels."

This threat remains, if the Government does not repudiate the Withdrawal Treaty before the end of this year. 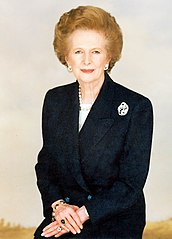 The upside is that the EU seems to be very busy, continuing to make itself less and less attractive as a place to do business. This presents great opportunities for an independent, democratic, sovereign, and free trade-loving United Kingdom to reap the rewards.

It is essential that the Government does not compromise in the coming weeks. This is why we continue to fight.

Please help us to keep going in publishing research like this, and influencing politicians and decision-makers. Before moving on we would just ask if you might make a donation – of any size – to support our important work? We have no corporate backers and need the generosity of people like you in order to survive and see this through. Thank you so much.

[ Sources: EU Parliament | HM Treasury | House of Commons Library ] Politicians and journalists can contact us for details, as ever.

Well done facts4EU. There are many people I know who voted remain in 2016 who now know they weren't given the full story and a 50% jump in net contributions would be a biggie if the eu parliament get this through. This is just one more thing we've avoided by the skin of our teeth.

I'm guessing the other countries still in the eu who would lose their rebate under these plans may not be happy?

1 tony Suffolk.
I agree.I have a good friend who voted remain. When I asked her why,no word of a lie she said,I didn't know what I was voting for!
I wait and look forward to the day when the EU crumbles.
The coming weeks are critical in our fight for a true Brexit.
Boris Johnson and his government must remove us from the EU.
We must be fully free and independent. Nothing else will do.
We are all watching.

Yet more deliberate thievery from the EU! Are all these additional con's from the EU not breaking international law too?! It most likely would be if it was the UK! What's the betting that the EU & the EU lovers within the UK don't think so! It's bad enough for a country to try this but a corrupt business corporation that THINKS it's a superstate! Roll on 31 December 2020! We might not be able to go anywhere while UK governments continue to con the British people with this Covid-19 nonsense but rest assured,ALOT of folk within the UK will be raising a few glasses come 11pm on that night! I know that I most certainly will be!! What a wonderful New Year this is going to be!!

That's why they're so p***ed we're leaving. Those new taxes I've no doubt would've gone straight to Brussels!

They've been bleeding us dry for years

Champagne is in the fridge ready for the celebration - almost 5 years after the epic historic vote!
After that 2021 must bring many changes to the whole UK, however I fear that the 'great new green' revolution that so many of our political numbskulls believe is a cul-de-sac which ends in tears. I hope it does not fritter away any advantages that are left from leaving the utopian eu.
I hope that political correctness will be in the trash-can of history as of 1.1.2021, but I fear it will just expand as the hate laws of Scotland in particular prove.
So exciting to be finally out of the corrupt eu, but there are many challenges that have to be faced up to and eliminated in order for our great country to be anything remotely as successful as the land our forefathers brought us into.

And now Boris plans to send millions of pounds to the discredited World Health Organisation. Brilliant!
Great to meet so many interesting democrats in Trafalgar Square today.
Jason Farrell on Sky News said we represent the "extreme" end of the (non) Coronavirus debate. ie thousands of swivel eyed loons, who have rejected the propaganda, because of the facts.

Not just remainers 9 Diane L, but socialists, marxists, commies, the eu, the globalists, world economic forum - in other words all the nasties in our societies. They want us to live in their utopian nightmare, where they are kings and we paupers slaving for them.
First the climate farce, now covid - what next if Trump is relected and Brexit finally gets done with no deal? What other toy will come flying out of the prams at us normal people because we dare to ask for FACTS.
I seriously think the lunatic asylums have emptied and we are now run by blinded utopians who believe in population reduction on their terms i.e. they decide who dies and who is worthy enough to live in their utopia.