Brexit Britain’s goods exports to the world soar, whilst those to the EU fall

Facts4EU.Org presents the last 10 years of the UK’s global success, and the EU’s failures 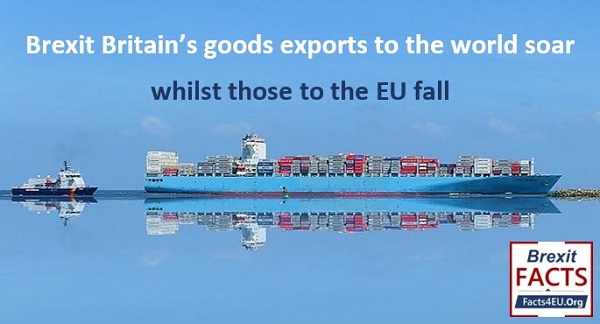 Last year the UK’s exports to the non-EU world rocketed by 14.1%

A unique Brexit Facts4EU.Org analysis of the last 10 years of UK trade figures 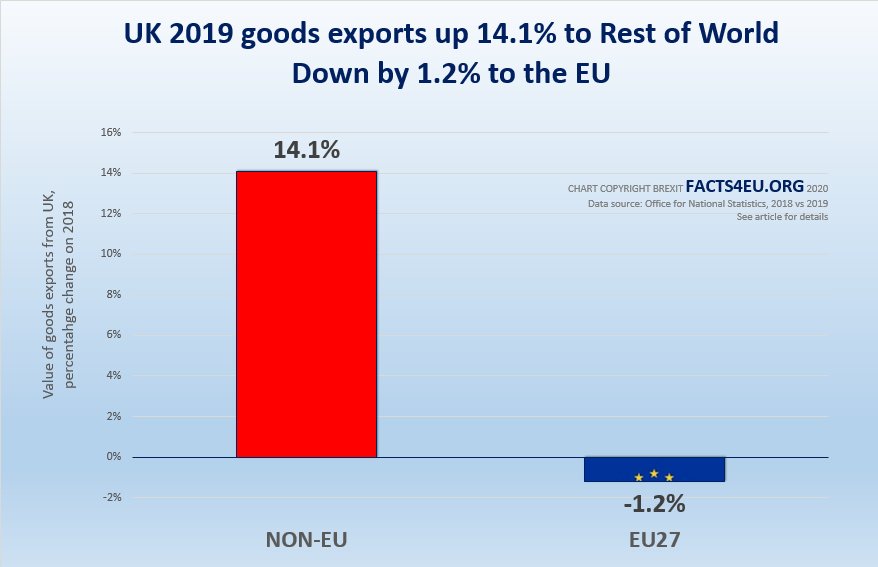 In the last 10 years, the EU has profited more and more from its "Treasure Island" 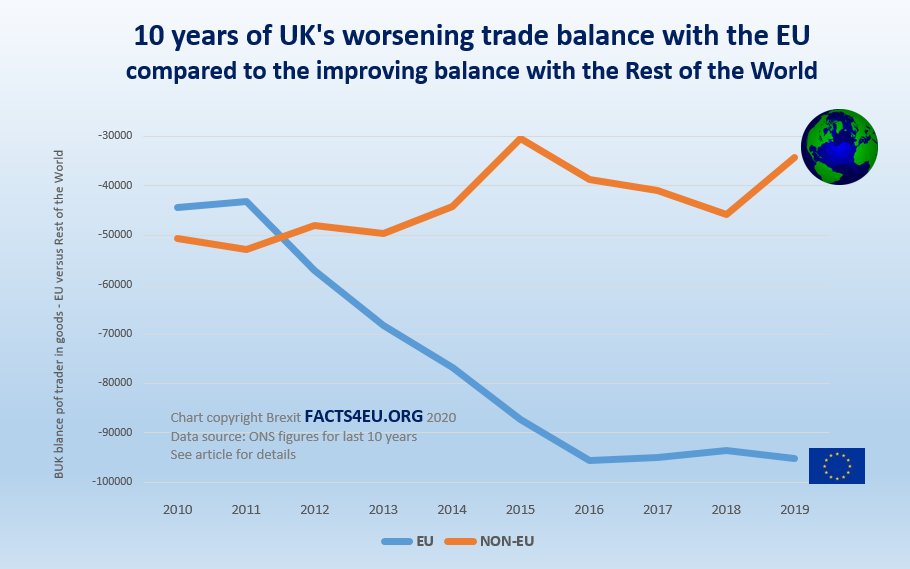 How do goods exports affect our economy?

Brexit Facts4EU.Org recently published the data on how our goods exports affect the UK’s economy. The facts are that goods exports are a small part, because of the UK’s strong services sector which dominates by a factor of almost 4:1.

Nevertheless our goods exports to the rest of the world are becoming increasingly significant. Below we show just one part of our research, which demonstrates clearly how the rest of the (non-EU) world is of far more importance to the UK’s GDP, and how its influence is growing. 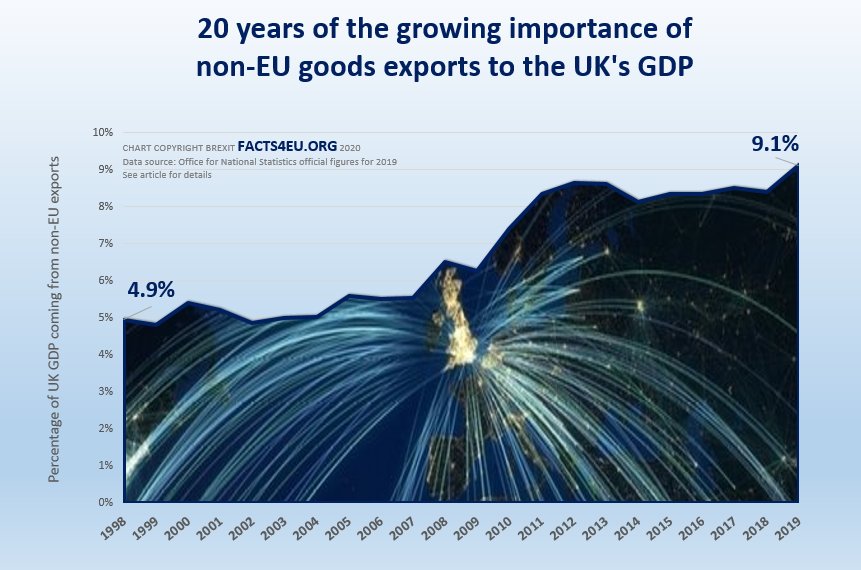 In that same 60 years the EU has only just managed to do a deal (still not ratified) with the world’s third-largest economy: Japan. The United Kingdom Government managed this is in just eight months since leaving the EU (in name only) on 01 February 2020.

Trade deals are not required to do trade, but they can help. The vast majority of the world’s economies and businesses trade with the EU without a trade deal. No Single Market, no Freedom of Movement, no massive annual payments, no Level Playing Field, no Northern Ireland Protocol, nothing. Just normal WTO rules.

The myth of the EU's Single Market and Customs Union

At present, UK companies can sell their goods to EU27 countries with no tariffs. The EU's Customs Union is supposedly a tariff-free zone for EU members. The Single Market supposedly imposes common standards. These are facts which were lauded by all those who campaigned for Remain in the EU Referendum of 2016 and ever since.

A simple question must therefore be asked. If the EU's Single Market and Customs Union are so essential to be a part of, why have the UK's sales outside the EU increased by 14.1%, when the UK's sales to the EU have fallen by 1.2%?

These are facts you will not see on the BBC, Sky News, or ITN

The above facts come from our analysis of the official figures from the Office for National Statistics. They are freely available to all news organisations, and yet they are not reported.

Sky and ITN are commercial organisations, although they are still supposedly regulated by OfCom. The BBC on the other hand is publicly funded by licence payers and by the Government. Their endemic bias is so palpable in their news and current affairs output that the case for defunding that part of the organisation at the very least is clear. If they cannot adhere to their Charter, they are not fit for purpose.

Whenever we publish the research we have conducted, presenting facts which reflect badly on the EU, we suffer attacks from those who have never accepted the democratic decision of the British people in 2016 to leave the European Union.

One line of attack from Remoaner-Rejoiners is “Well, this just shows how we can stay in the EU and still sell around the World.” People like this completely miss the point.

Have any of the Remoaner-Rejoiners traded internationally?

Some of our team have done this for years.

We suggest that Remoaner-Rejoiners should try selling into France and see how they get on. Members of our team with this direct experience would rather sell to a company in Phoenix Arizona - even with tariffs - than to a company in Marseilles in the South of France.

A sense of pride and confidence may be returning

We believe that what is now changing is a feeling amongst business people that the United Kingdom will soon, once again, be a free and independent trading nation, unshackled by EU regulation.

Since 01 January 1973 when the UK joined what was then the Common Market, the British people have been subdued, thinking that the UK was just one small player in a massive EU trade bloc. This was always wholly untrue.

The fact is that, thanks to the Customs Union the UK became a captive market for the other EU countries. This is why German businesses refer to us as “Treasure Island”. The UK is the country that benefited least from the Single Market, as the EU Commission itself admits and which we have previously reported.

Now we sense a feeling of national pride returning, as more and more businesses feel ready to embrace the global market, unencumbered by EU rules and regulations, and ready to present excellent British products and services to all our friends around the world. We also see these international friends increasingly keen to buy British.

When we are finally and fully free of the EU’s totalitarian shackles,
we can’t wait to see the United Kingdom’s full and mighty potential unleashed.

Please support our work now. We rely 100% on the generosity of ordinary people to help to fund the essential work we do. Quick, confidential, and secure donation links are below this article. It only takes a couple of minutes, and then you’ll have the warm glow of knowing that you’ve backed the moist prolific researcher and publisher of Brexit facts in the world.

We were here before the EU Referendum. We would like to be here to see the job finished. Thank you.

[ Sources: Office for National Statistics | EU Commission / Eurostat ] Politicians and journalists can contact us for details, as ever.

That's indeed good news. Hopefully at least one thing we learned by now: not to rely on the EU in anything!

Another line of attack from Remoaner-Rejoiners (paraphrased): "I don't have any answers to your points, therefore I'm going to write insults and swear words to try to get the moral highground." 😂😂

This is what the Remainers feared most, positive proof that their was life after the EU dictatorship.

My God I thank thee for all the wonderful people at Fact4eu, for they produce the bare facts that the media and especially remainers seem to be blinded by. This is indeed great news 1. Hannah, I hope it starts to get better and better. Can't wait for a fully free UK.
However, there are gloomy clouds ahead, if UK Column have got their facts correct too, and all you people have to check and triple check before publishing. I fear the defense of the realm has been fully compromised.
I want to see a truth commission set up right across the UK as I fear there are many fifth columnists hard at work to drag the country downwards. For some of the them I would be happy with jail time but the more serious ones I think deserve the old treatment for traitors.
Don't get me wrong I am 100% Brexit and Trump, for without these two the western world is going in the direction of a communist chaos.

Slightly O/T but one thing we don't hear journalists or our leaders mentioning much, unless I've personally missed it all of course, is the situation with the Channel Tunnel. "The EU is working on legislation to ensure the safe and efficient operation of the Channel Tunnel railway connection" So, what happens to the Treaty of Canterbury 1986, an agreement between the UK & France now that the UK has left the EU ( in name only ) with that agreement now between a Member State and Non-member State ( but still 'in' & paying ) An interesting read & good points raised, penned by 'Caroline Bell' on the Briefings for Britain website, entitled The EU's Power Grab in the Channel Tunnel must be stopped.

There is an impressive piece of double-talk from Brian Connelly at RTE this morning. He begins his weekly column with the usual denial that the EU has any intention of using the Northern Ireland Protocol to exclude British food from Northern Ireland - and therefore the British Government isn't telling the truth about the situation, right? - but then continues to say that the EU "does, indeed, take sanitary and phytosanitary (SPS) rules seriously" and therefore will require the UK to spell out its food safety regulations in order to admit British food to NI which is, after all, part of the Single Market.
So it's pretty neat. Of course the EU has no intention of excluding British food from NI *as* *NI* but may have to exclude British food from NI as an effective part of the Single Market.
And this Catch 22 thinking is getting coordinated support from most of the World Press, elites inside the UK and of course Joe "no extradition to the UK" Biden.
I have come round to thinking that a clean break is the only way out of this, otherwise the EU will just come up with one clever trap after another. There really is no obvious end to their trickery.

Whatever people think about the Internal Markets Bill - IMB - I think we have reached the point where it has to be passed into law, no matter what. The reason for that is that once you propose a law that gives the UK Government final authority over trade within the UK, if you withdraw or fail to pass that law, you are effectively conceding that the UK is not the final authority over trade within its own borders and that someone else then is.
The EU claim to authority over trade between the rest of the UK and NI has no obvious limits. As Barnier recently said over Fisheries, it's not just the trade itself that the EU would need to control, but the facilities at each end of the trade, the transport that moves the trade, working hours, benefits, investment, Government assistance and so on. The trade itself is just the key to a lock that the EU will use to progressively control ever-larger chunks of the UK economy and UK law.
And if we let this happen in NI, you can guess that Scotland will demand the same status. The ideal for Scotland would be to remain part of the UK and receive its annual subsidy, but also be part of the Single Market, so that the EU controls Scotland-England trade in the same way as rUK-NI trade.
Nothing magic is going to happen at the end of 2020. Even if the transition period ends, we are going to be living with gradual EU encroachment on more and more *internal* UK sovereignty for the next twenty years at least, and pretty much all that can stop it is to pass the IMB now, ignore the screaming, and forget the FTA and the WA.

David Kurten is going to stand for Mayor of London and has vowed to set up a new Party - can't come soon enough!