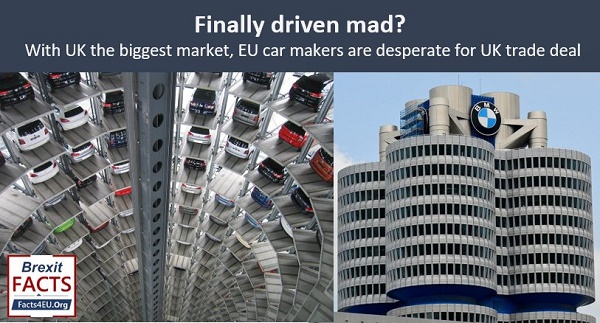 ‘Only weeks left to save industry from Brexit disaster,’ says EU’s automotive association

Brexit Facts4EU.Org reveals the extent of the impact of a no deal Brexit
on the EU’s massive automotive sector

The reality of the years of the EU Commission’s intransigent and hostile approach to the United Kingdom in its trade negotiations is finally starting to be driven home within the EU. In particular it is now being felt by the EU27’s huge and failing motor manufacturing sector. We reveal the latest EU industry report, the statements, and the shocking numbers.

Brexit Facts4EU.Org’s analysis of the latest official figures from the EU’s official statistics agency and from the 2020/2021 report by European Automobile Manufacturers' Association (ACEA) shows the severity of the impact they are now facing, unless the EU Commission wakes up and smells the fumes coming from their own industry.

The facts about the EU's car makers and the Brexit threat 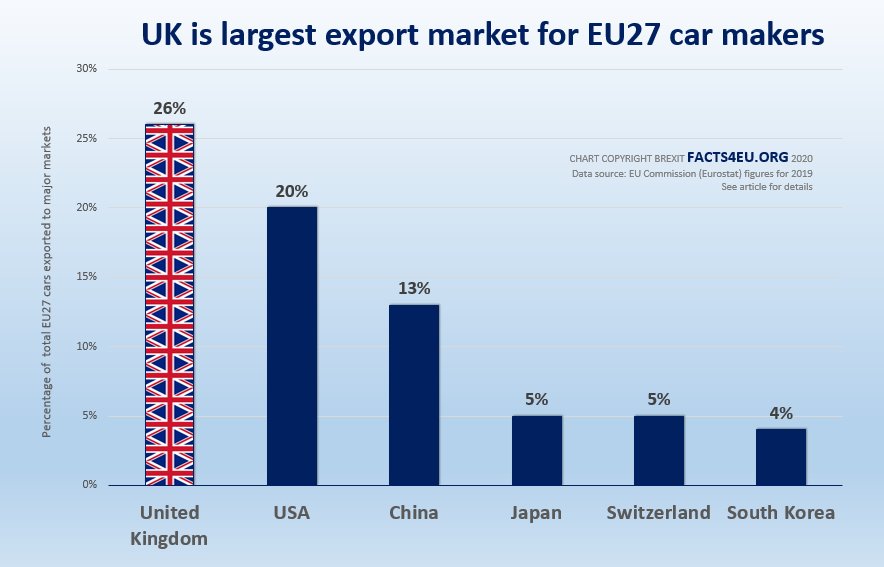 The figures above come from the European Automobile Manufacturers' Association and Eurostat (the EU Commission’s official statistics agency). Job totals include direct manufacturing jobs, plus those jobs in other companies which supply the automotive manufacturing sector.

Who does the EU sell its cars to?

As ever, Brexit Facts4EU.Org went to the EU’s official source of data – its statistics agency Eurostat. Here is what they say about the figures for last year.

From the EU Commission's statistics agency

The European Automobile Manufacturers' Association has called on the EU urgently to secure a trade deal with the UK.

“Negotiators on both sides must now pull out all the stops to avoid 'no deal' at the end of the transition, which according to new calculations would cost the pan-European automotive sector some €110 billion in lost trade over the next five years, putting jobs at risk in a sector that supports 14.6 million livelihoods.” 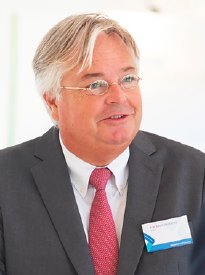 “The stakes are high for the EU auto industry – we absolutely must have an ambitious EU-UK trade agreement in place by January. Otherwise our sector – already reeling from the COVID crisis – will be hit hard by a double whammy.” 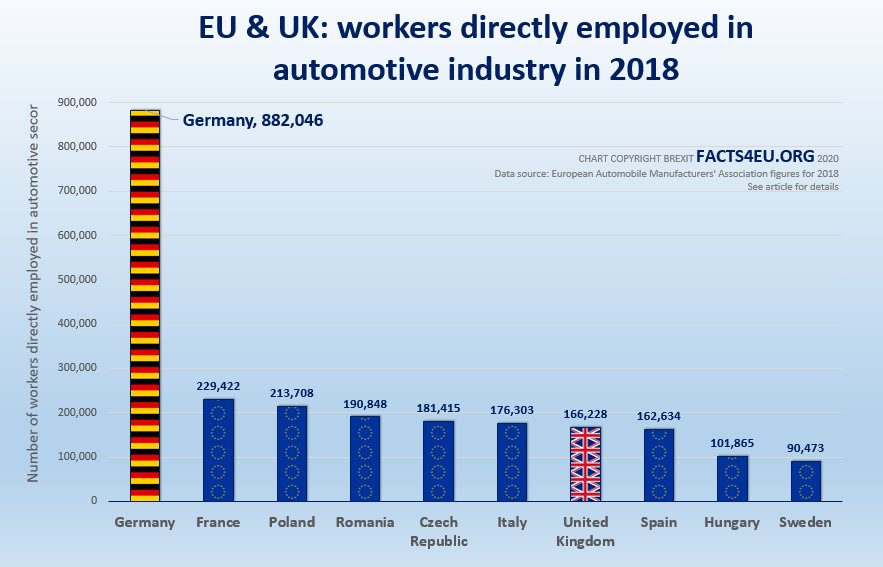 The EU’s automotive sector was declining even before COVID-19

Unfortunately for the EU’s automotive industry, things were already going badly before Brexit and even before the COVID-19 crisis. Below are the number of all types of motor vehicles exported by the EU.

Last year the EU’s exports of all types of vehicles fell by nearly 7% - in one year - and this was before the COVID-19 crisis. To make matters worse, from 01 January 2021 the EU is facing major threats to its sales to its largest export market – the United Kingdom – unless it agrees a serious and sensible trade deal along the lines of the ones it has recently struck with countries such as Canada and Japan.

As we're talking cars, what about the EU’s green agenda?

The EU Commission led by its anointed President, the German Ursula von der Leyen, has the “European Green Deal” as its top priority for the next seven years. This is the first item on the agenda and is apparently more important to the EU Commission than jobs, individual prosperity, or the serious societal problems now evident across the continent.

When it comes to vehicles, the “European Green Deal” has a long way to go. Currently, according to the European Automobile Manufacturers' Association, only 3% of all passenger cars on EU roads are electrically-chargeable.

Thanks to Theresa May’s disastrous pro-Remain Government, the EU’s manufacturing sector seems to have believed that the UK would ultimately acquiesce to the Commission’s dictatorial ‘punishment beating’.

Much can be written about the current UK Government of Boris Johnson on many levels, but so far there has at least been some robustness from Lord Frost and his team of negotiators.

Now it seems that some of the major players in manufacturing and commerce across the continent are at last speaking up – to the EU Commission and to their own governments.

The report issued by the European Automobile Manufacturers' Association must be taken in context. It refers to the risk of damage to both the EU27’s and the UK’s motor industry. It does not help that the UK’s Society of Motor Manufacturers and Traders have consistently supported the Remain position, of course, and that they are part of the European Automobile Manufacturers' Association. (Known as the ACEA, because it’s based in Brussels.)

The statement accompanying the 2020/2021 report from the ACEA is clear. The EU’s car manufacturers are now deeply worried, as the quotations above show. With exports falling significantly before COVID was even on the horizon, and with the UK no longer part of the EU from the end of this year, the EU’s importance as a global car manufacturer will be much reduced.

The UK is the EU’s largest car market by some margin. As things stand, the obdurate and unreasonable stance of Monsieur Barnier and his colleagues may yet deliver what many of us have said would happen all along: a normal WTO terms trading relationship. This will mean a tariff of 10% on cars.

For millions of car workers across the EU whose jobs are already threatened, they just might start having something to say about the EU.

Then Bundeskanzlerin Merkel might have to wake up quickly and smell ‘den Kaffee’….

You have just read another serious, well-researched report which informs the whole debate about Brexit and trade deals. These reports take a lot of time to research, and then a lot more time to present them in an easily digestible format for the public and for MPs. If you appreciate our work to ensure a free, independent, and sovereign United Kingdom, could we ask you just to pause for a moment and go to the donation links below this article? Every donation, no matter how small, is vital to our continued operations. Thank you so much.

I wonder how long it will be before Biden resurrects TTIP. The Express are reporting that Obama is tipped to be Americas ambassador to the UK. I can't help feeling that strong forces are joining together to manipulate the UK's surrender to the globalist relentless quest.

Another reason for us walking now.

It will simply result in European car manufacturers opening factories in the UK once again to beat the tarrifs and hold onto that 26% of the market!! Or risk losing it to japan

Boris undoubtedly has the upper hand, but i am still sure we will get BRINO.
The handling of the Chinese virus proved Boris is not fit for purpose.
He should be removed ASAP.

How did the EU and in particular Germany get here. Under STODGY Merkel , with the benefit of the EURO Germany has become the industrial powerhouse of Europe.
The Union has to be kept together for Germany to keep on benefiting.
Look how the Troika bailed out Greece to the benefit of Germany, the major creditor.
The cry is 'solidarity' which is taken up by the Brussels Administration with the likes of Barnier. The Union has to be held together otherwise they would all be out of a job.
As the saying goes the chickens are coming home to roost.
Germany will not sacrifice their industry so that the French can keep on fishing for free.

Not any more I'll never buy anything from the EU if I can avoid it. I'm buying British!

so we start to rebuild the companies back in the UK ....its not impossible

Walking away, with no WA/PD and trading on WTO is and was always the only way to properly regain our independence & deliver in full the democratic decision to leave the EU. On this, three successive Conservative Govts have so far failed to deliver. The current Govt have absolutely no excuse with an 80 seat majority.
Yes, a trade deal would have been nice but as we have seen from 4 and a half years there has been minimal discussion on actual trade. It's all about the level of control(s) that the EU will retain.
I'm afraid that I now see ANY 'trade' deal with the EU prior to us properly leaving as yet another con by the Govt perpetrated on the people of the UK.
They are intent on implementing the 'turd' (with added Boros glitter) WA/PD in full.
Against any business sense, they are still supplicating to the EU 'negotiations' 7 and half weeks before we 'leave'. Where are the plans for managing stocks and defending our fishing territory? May did all the compromising up front 4 years ago. Now there's talk of 'compromise' on the only areas that the EU mantra calls for. Just what EXACTLY have the EU 'compromised' on, that wasn't ours to control in the first place? Yet our shameful PM ploughs on with the deceit.
It is clear that the blob of jelly spineless Johnson & co are not running the UK & are just puppets being operated by others & following EU orders. Whether it was the sudden reversal to follow the EU imposing lockdowns & tiered 'freedoms' (odd that they all appear to be in 'lockstep') to the very obvious 'casedemic' which defies logic & reason, imposition of the 'green agenda' despite the destruction of our economy & living standards and his acceptance of a media only appointed President of the Basement despite real & unresolved irregularities. Complicit & driving all of these for a foreign agenda has been the msm driving mass hysteria & supposed 'polling' whether for the 'deadly' plague or leaving the EU.

Attempts to assert our sovereignty, necessarily caused by the atrocious WA/PD result in threats by the EU and treason in the Palace of Westminster.
Boros will use his promulgation of Biden as an 'excuse' to accede further control to the EU in the forthcoming 'magic' deal.
The actions of our PM, his Cabinet and Parliament (apart from a handful) have been shameful.
I hope that the brown envelopes were worth it. Trials cannot come soon enough.

The outlook post no deal brexit will be worse still for EU manufacturers, with tariffs pushing their most popular vehicles beyond the value and tax thresholds applied to most company vehicles. The result will be that locally produced Vauxhall, Toyota and Nissan will become a more viable prestige option not to mention the overseas brands that negotiate tariff free trade with the UK.