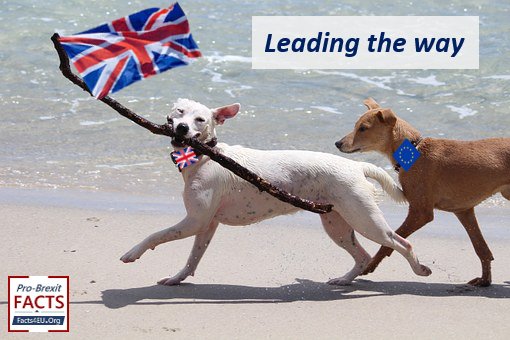 France’s economy plunges by 3.3 times the rate of the UK economy

Friday, Brussels: In its latest release of economic results for the EU, the Commission’s official statistics agency has published some numbers which will shock hundreds of millions of EU citizens.

In this Sunday special, Brexit Facts4EU.Org publishes its exclusive analysis of the EU’s latest economic figures. We continue to use official statistics, our output is still original and unique, and we are still not sitting behind a paywall.

The EU versus the UK - latest figures for the economies

The dramatic fall in the EU’s total GDP this year stems from Coronavirus and from the departure of the UK.

2. What happens if the EU pretends the UK hadn’t been a member of the EU last year?

In its statement on Friday, the EU statistics agency has inexplicably excluded the UK from its combined data for 2019. It is as if the UK had not been a member at that time.

Below we comment on this extraordinary action by the official statistics agency of the EU Commission. For completeness, however, we are showing the figures produced by the EU on Friday, which compare only the EU27 last year with the EU27 this year.

In the Eurozone of 19 EU countries the combined GDP was affected even faster – by -3.2%. 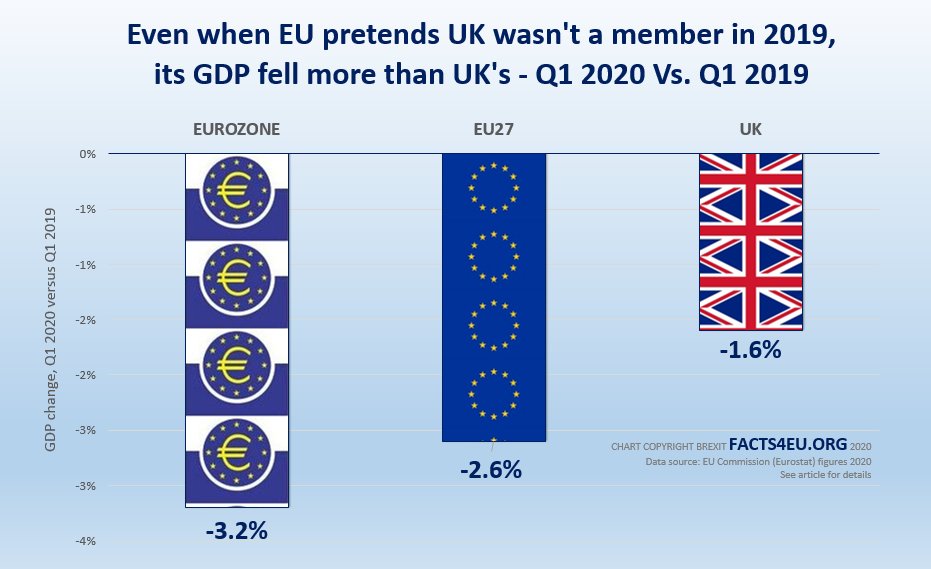 3. And finally, the UK economy beats the EU in either scenario above

The EU is not a country – How are the individual EU countries doing?

A very common mistake made by anti-Brexit campaigners is to refer to the EU as if it were a country. It is not. It is made up of 27 different countries and 27 different economies.

On Friday the EU published the changes in the economies of most of its members in the first quarter of this year. The UK used to be the EU’s second-largest economy, worth more than 18 smaller member countries combined – until the UK left in January this year. 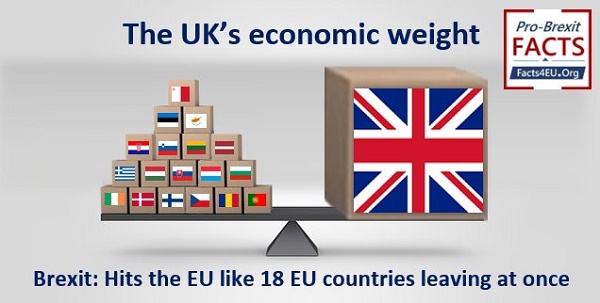 Since January, the top three EU economies are:- 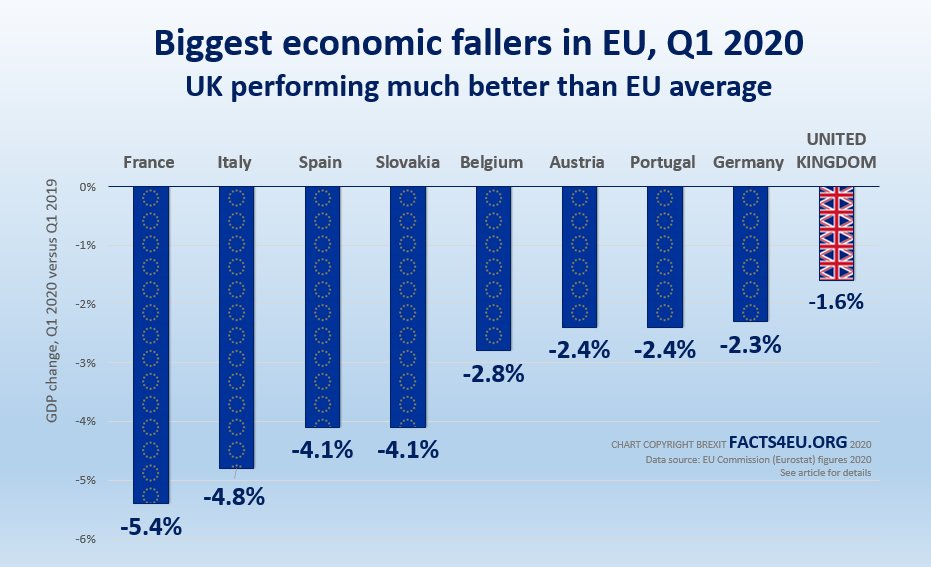 Finally, here's a fact for all the Remainer-Rejoiners out there

Whenever we publish articles such as this, we get inundated on social media by anti-Brexit campaigners who just can't accept genuine facts which we produce from the EU itself. In this case they are desperate to prove that the rest of the EU suffered from Coronavirus before the UK did.

We have one or two final, uncomfortable facts for them:

Anti-Brexit campaigners may wish to know that the German economy went negative in the final quarter of last year. The official German statistics agency admitted it last week, correcting the GDP figures which they published some months ago.

Please do correct us if we're wrong, but we thought that there was no Coronavirus effect in Oct-Dec last year?

GDP growth in Germany has now been negative in three out of the last five quarters. That's worth thinking about for a moment.

And it was negative in the last two, so Germany is officially in recession.

The simple fact is that if you compare the EU's total GDP in the first quarter of this year with the same period last year, it has plunged by 17.2%. This is fact. The figures come from the EU's official statistics agency on Friday.

The agency chose not to mention this fact, but we delved into their raw data as usual and it's all there.

Quite incredibly, once again the EU Commission has published a report which airbrushes the UK out of the picture. Its statistics agency provides commentary showing the fall in GDP between Q1 2019 and Q1 2020, but EXCLUDES the UK from these figures, as if the UK had never been a member.

Stalin would have been proud.

The EU is not one country

In the piece above we have included the information from the EU, showing GDP as if the EU27 were one country. We have even shown the fall in GDP in the EU27 (excluding the UK) even though we feel this is highly misleading.

Anti-Brexit campaigners are forever trying to present the EU as if it were one country, thereby trying to show the United Kingdom (their own country!) as somehow small and insignificant by comparison.

There are two thoughts we would like to share about this, on this Coronavirus Sunday in mid-May 2020.

1. With the exception of the multi-nationals, the vast majority of businesses trade with businesses in another country, not with the EU. Members of the Facts4EU.Org team who are in business have always discussed and then implemented a strategy by individual country and then targeted companies, not by whether that country was a member of the EU. Indeed in many cases it is easier to deal with companies in the Commonwealth and other countries around the world, than it is with certain countries in the EU.

2. The second point is highly topical. When the whole Coronavirus crisis hit, "EU solidarity" went out of the window in every capital across the EU. It was every country for itself - borders closed, free movement stopped, exports of essential goods to other EU countries were banned. The EU Commission has been desperately trying to salvage the situation ever since.

Ending on a positive

This has been a good week for the UK. David Frost and the UK negotiating team stood up firmly to Michel Barnier and the nonsense being spouted by the EU. The EU Commission itself is clearly still reeling from the decision of the German Constitutional Court that the ECJ is not supreme and that the ECB must stop its bailouts unless it can prove something it can't.

And the UK's economy has been shown - by Brexit Facts4EU.Org - to be coping rather better than many EU countries, in the first quarter of this year.

Things are tough for many people because of the effects of the Coronavirus measures. We have certainly felt this, with some readers having to cancel regular donations to us. IF you can possibly help to keep us going with a donation - regular or one-off - quick and secure links are below. You will receive a nice email from a member of our team. Thank you so much.

[ Sources: EU Commission - GDP figures | ONS ] Politicians and journalists can contact us for details, as ever.

Brilliant as usual. I wonder why I never saw this on the BBC?

1 - Will - because the biased, left-wing BBC hate this country and every conservative person in it!

Why they are trying to slow up negotiations

There was only 0ne week of lockdown in twelve of Q1 for UK whilst other countries were a week ahead. So Q2 (to end june) will be more relevant and interesting.

I think we should all be aware by now that as we aproach end June, all the forces of the left plus the weakling part of the previous conservative party will be arranged in alliance with the EU against the 17.4 million (hopefully many more by now) and the PM. They will stoop to no lowest of the low to push their negative agenda. They haven't given up. just as communists play the very long game. Just like violent jihad, they are all the same - they want want you and I have. The globalists want us all as slaves, chipped and working to keep them in their laps of sheer luxury.
The west is at the most important crossroads for many decades, get this wrong and we are finished. Get it right and the globalists can be in the Hague and suffering for the rest of their natural.

The BBC only wants to report on negative stuff they can bash the govt with. They are very anti brexit and therefore anti this govt who wants brexit. If anything shows the govt in a bad light then the BBC will run articles about it in their news stories but you'll rarely if ever heR them praise this govt. I think out govt are doing a good job in very difficult circumstances!

Douglas V it's been our money keeping them afloat for years ... and are now going to lose that unless they can keep us bound to them ... hoping Boris will buckle and extend so tying us to bailing them out for years