EXCLUSIVE: The EU has INCREASED its greenhouse gas emissions for years 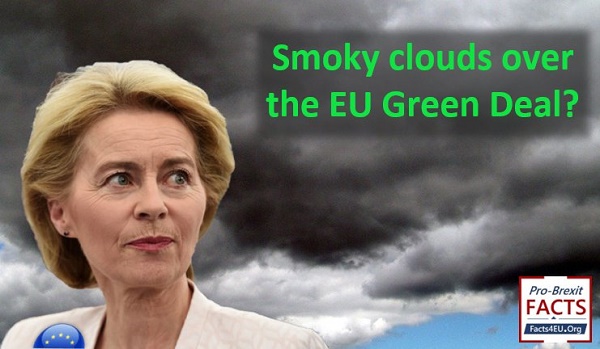 UK is the clean man of Europe, while figures show EU27 are polluting more

This exclusive Brexit Facts4EU.Org analysis of the EU’s own report shows that the climate extremists of Brussels have increased greenhouse gas emissions across the EU27 since 2014.

No-one amongst the peoples of all the EU countries voted for this, but in July last year Frau von der Leyen decided her “Green Deal” was to be the EU’s No.1 policy priority. She decided this before any of the rest of her unelected Commissioners had even been appointed.

Here is how the EU itself describes this on its website:

The above quote comes from the EU’s statisticians at Eurostat. The rhetoric from the unelected eurocrats at the EU Commmision has of course been even more strident on this subject. For many years the EU has been lecturing the rest of the world on the need to address climate change.

The UK is getting cleaner and the EU27 are getting dirtier

Brexit Facts4EU.Org took a close look at the latest figures produced by the EU on greenhouse gas emissions, as these were part of a propaganda / ‘information’ exercise conducted by the EU Commission through its statistics agency this month.

Our analysis shows that the UK is getting cleaner and more fragrant. It’s the EU27 who are the dirty boys and girls of Europe.

Since the IPCC report was produced in 2014 for the Paris COP climate change conference, the following has happened to greenhouse gas emissions, according to the EU:-- 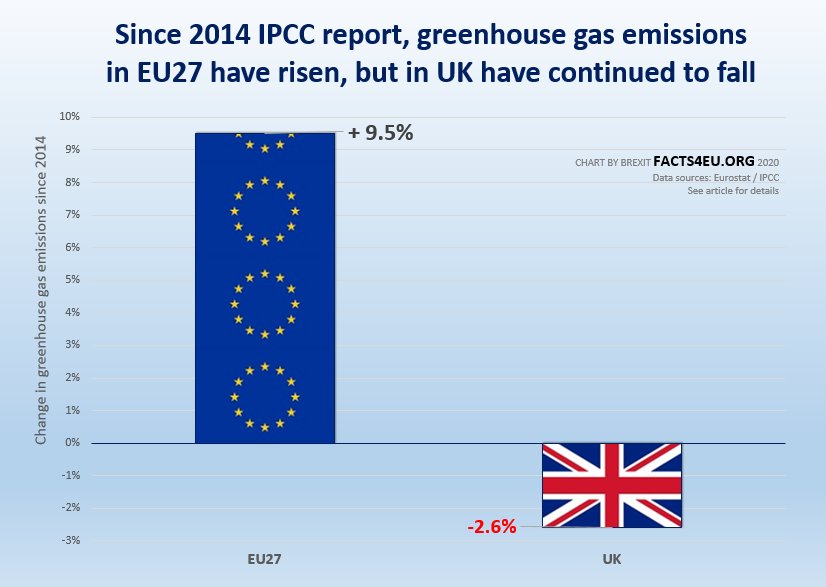 Let’s go further back, as climate change has been going on for millennia

The EU has data from 1990, so that is what we have used. Since 1990 this is what has happened to greenhouse gas emissions, according to the EU:- 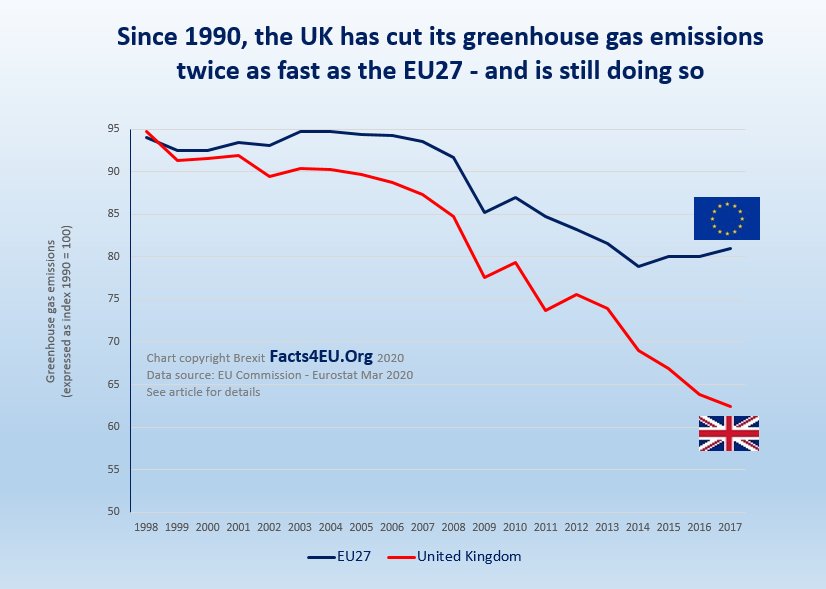 Until around two weeks ago, it seemed it was barely possible to move amongst EU press statements and releases without suffocating under messages about the new EU Commission’s “Green Deal”.

Now of course the EU Commission is mostly publishing about the Coronavirus, with some additional pieces about the renewed immigration crisis on Greece’s borders (and breakdown of its deal with Turkey), as well as some concerns about the collapse of the Italian economy.

With the exception of the Coronavirus we have a strange sense of déjà vu.

After months of the new Commission talking about “the climate emergency”, which itself follows many years of talking about “climate change”, we cannot let them off the hook. Their Green Deal remains their top policy objective.

On Wednesday last week (04 March 2020), the EU Commission adopted its proposal for a ‘European Climate Law’. Amid much hullabaloo Commission President von der Leyen had invited Greta Thunberg to attend.

It was therefore somewhat embarrassing for the Commission that Miss Thunberg slammed the new law and its objectives as a ‘surrender’. It seems there is no pleasing some people.

We just thought that all the climate emergency protestors in the UK – most of whom seem to be Remoaners/Rejoiners – should know how badly the EU has been doing on greenhouse gas emissions compared to the United Kingdom.

During the Referendum campaign we were told over and over again by Green Party MP Caroline Lucas and her colleagues how it was the EU that was almost solely responsible for protecting the UK environment. Worse still, an entire generation has grown up being brainwashed into this way of thinking, by an eco-supporting teaching profession which overwhelmingly voted Remain.

It's a funny old world where a teenager with very limited knowledge of facts can receive massive global funding, and yet we must rely on the generosity of a tiny percentage of the thousands of readers who come to us for well-researched and important facts which they never get from the BBC.

If you can help us to keep going today, quick and secure donation methods are below this article. Every little helps. Thank you so much.

[ Sources: IPCC | EU Commission - Eurostat ] Politicians and journalists can contact us for details, as ever.

Fine speeches by Ursula on going GREEN, do not actually achieve it.
Take a look at Germany's emissions. Germany has a confused policy. It decided to phase out Nuclear and replaced the generation shortfall with new coal fired power stations burning lignite (dirty coal).
At the same time Germany went big on wind and solar, paid for by energy taxes and the most the most expensive electricity in the EU. Many Germans are in fuel poverty, whilst others heat their homes with natural gas from Russia. To achieve net. zero CO2, natural gas must be phased out.
How will the Commission fund its green policy and what directives will it issue, acceptable to all member States?

I think they will have to get rid of half their population instead of importing it. Green policy = Net Zero = madness, just like the Shengen no border madness.

Off Topic
On Monday I watched the Commonwealth Service held in Westminster Abbey. At the end of it I thought - isn't it amazing that such a diverse ethical group of Countries still cooperate in a friendly manner.
Geographically we are part of Europe, but twice in one Century we had to rescue Europe from dictatorship.
Why did we ever fall into the trap of a political dictatorship ruled from Brussels.
We have regained our sovereignty and its fresher in the outside World.

I'm still waiting to be convinced by any "climate emergency" people that there is sufficient real science behind so many of their scare stories. My general impression is that it's p[robably mostly a load of rubbish.
That apart I enjoyed your article today for showing up the usual hypocrisy of the awful EU organisation once again. Thank goodness the British people had the good sense to decide to leave it. It beggars belief that the EU can produce information like this and yet it takes an organisation like yours to do the research and bring this to life.
Where is our climate-emergency-loving BBC on this?
Well done and thank you for all your hard work. Very interesting article.

Comment 3
''... I think they will have to get rid of half their population ...''
Well, surprise, surprise. Along comes a virus to effect just that. And to negate Brexit in the process.
It's enough to make one into a conspiracy theorist, isn't it?

L Jones (6), does seem rather fortutious timing I suppose allowing various people on both sides to 'save face' if Brexit failed.
After all there are lunatics who believe Britain should only have 30 million or so people. Never mind about other countries who seem to be exploding with newborn.

put a windmill or solar panel on all EU buildings in Brussels plenty of hot air coming from this place, nice chocolates and great beer available in Brussels

Comment 4 - Sydney - WE didn't fall into the trap of a political dictatorship from Brussels - our arrogant, self-serving Establishment arbitrarily imposed it on us, deceiving us and 'lying by omission' every step of the way … they still are!

Very well said Barbara (9) - they certainly are continuing. 47 years of nothing but lies about the real purpose of the EEC/EU.
My generation will never see justice re these lies.