EXCLUSIVE: The EU loses Round One of Brexit Trade Negotiations 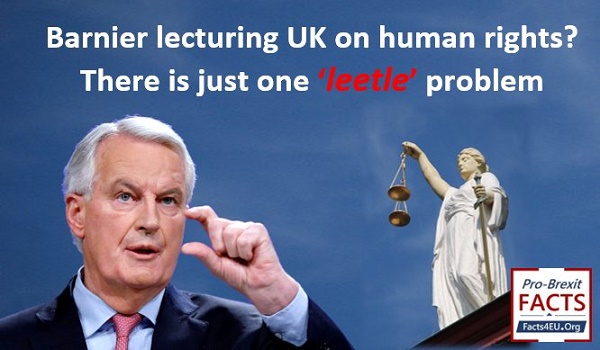 Part One of a Two-Part Brexit Facts4EU.Org Special Report
Part Two follows tomorrow (Sun 08 Mar 2020). Not to be missed!

The EU has demanded that any trade deal with the UK be contingent on the UK making a commitment in the new trade treaty to abide by the European Convention on Human Rights (ECHR).

On Thursday, the EU’s Chief Negotiator Monsieur Michel Barnier got very exercised about this subject in his long statement in French following the first round of UK-EU trade talks this week.

The European Convention on Human Rights

The EU has still not signed nor ratified it

Below is an excerpt from the statement given by the EU’s Chief Negotiator to the world's press on Thursday. 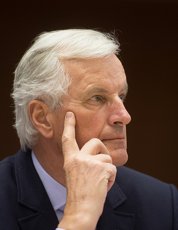 “Ambitious cooperation requires commitments on both sides with regard to the fundamental rights of individuals.

“However, the United Kingdom has informed us that it does not want to make a formal commitment to continue to apply the European Convention on Human Rights. Nor does it want the European Court of Justice to play its full role in the interpretation of European law - and this is particularly serious when it comes to the fundamental rights of individuals.

“If this position is maintained, this would have an immediate and concrete effect on the ambition of our cooperation, which will remain possible on the basis of international conventions, but which cannot be as ambitious as we wish.”

Is it really true the EU has not signed nor ratified the “European Convention on Human Rights”?

At the end of Round One of the trade talks with the UK last week, Michel Barnier lectured the UK at great length about human rights, and the need for the UK to include its commitment to the European Convention on Human Rights in the trade treaty.

How is this remotely possible?

For those politicians such as the Rt Hon Kenneth Clarke MP, who boasted of never having read EU Treaties, they could look up this obligation in Article 6 (2) of the Lisbon Treaty.

As the EU Parliament said:

“The purpose of the EU’s accession to the ECHR is to contribute to the creation of a single European legal space, achieving a coherent framework of human rights protection throughout Europe.”

Does irony ever get more delicious than this?

In a move of such delicious irony we barely know where to start, it was the European Court of Justice that stepped in and prevented the EU from signing the European Convention on Human Rights. It seems that in 2014 the Justices decided that the ECHR might override their powers under the EU Treaties.

Apparently “accession [to the ECHR] was liable to upset the underlying balance of the EU and undermine the autonomy of EU law.”

Since 2014 the EU Commission – of which Michel Barnier is an employee – has repeatedly said that it considers accession to the ECHR to be a priority. Six years later and the EU is still not even close to either signature or ratification. And this is almost 70 years after the UK co-drafted and signed the Convention.

Does the EU have any chance of lifting itself up to UK standards?

In order to move closer to a point where the EU could say it was lifting itself to UK standards, the EU would have to sign and ratify the Convention. For this to happen, the following will be required:-

One of the ‘non-EU states’ we refer to above which would need to agree to any changes will be the UK, of course. To remind readers, the UK has been a signatory of the Convention for almost 70 years, since 1951.

The question to Monsieur Barnier must therefore surely be this

“When is the EU going to lift its standards to the level of British standards on human rights?”

Tomorrow we will turn the screw a little more. We will show how the EU27 are seriously underperforming the UK in a crucial area of human rights.

As usual we will use the latest figures from the EU itself, released only days ago.

Various members of the Brexit Facts4EU.Org team are fluent in European languages other than English. This is one of the reasons we can bring you news from around the EU in the way we do. We enjoy different languages in the same way we love different European cultures. This is one of the reasons we love Europe but hate the EU, with all the EU's attempts at homogenisation and its clear desire to destroy the identity of individual nations.

When it comes to absolute fundamentals such as the UK-EU trade talks, however, we feel it is simply unacceptable for the EU Commission to publish long statements in a minority language such as French. On Thursday the vast majority of Mr Barnier’s statement after the three days of trade talks was in French.

These talks are important. Everyone across the EU needs to understand what is being said. The EU’s common language is English. Please use it, Mister Barnier.

As ever, we are forced to make an appeal for your support. We have no corporate sponsors. We rely on you, ordinary readers, to be generous.

We do not sit behind a paywall – you can read our well-researched and factual reports each week for free. Hundreds of thousands of people read our work. Please become one of the very few who decides to support freedom of speech with a donation to us today. You will receive a personal ‘thank you’ email from a member of our team.

https://www.youtube.com/wat... This little gem helps explain why they would like to keep the ECHR on board.

We ought to get out of the ECHR also as for Pesi or whatever name that is, if You are welcome to leave if You don't like Our Country good riddance, I hope all Foreigners will leave it will be nice to walk through Our Towns again & hear English

In response to Pasi's comment, message #6. Is this the same EU that you say isn't a country (We Brexiters agree), but has a Flag, an Anthem and a self-appointed, unelected EU Commission? With regards to the EHRC, it also protected Hate Preacher Abu Hamza (hook for a hand, after it was blown off making bombs) for years, so the UK version will be for the protection of the UK residents..... we dont need an EU version as it exceeds it anyway.

The EU produces nothing, it sells nothing, it makes not one penny profit. It is a government without a country.it taxes us, it spends and enjoys the fruits of our labour.in the end it is worthless,a parasite bleeding it's hosts dry of money Nationhood pride and Independence.
They are living millionaire, opulent lifestyle's courtesy of other countries hard working taxpayer's.
They earn nothing,they are elite taker's.

The Treaty of Lisbon provided for a duty of the EU to accede to the ECHR. However, when the negotiated agreement was put to the Court of Justice for opinion, it ruled (in December 2015) that the agreement did not provide for sufficient protection of the EU's specific legal arrangements and the Court's exclusive jurisdiction. For the time being, no new accession agreement has been drafted, but both the Parliament and the Commission underline the need for EU accession. Scholars remain divided, some considering that accession would bring added value, whilst others express the view that accession would actually do more harm than good to EU citizens.
https://www.echr.coe.int/Pa...