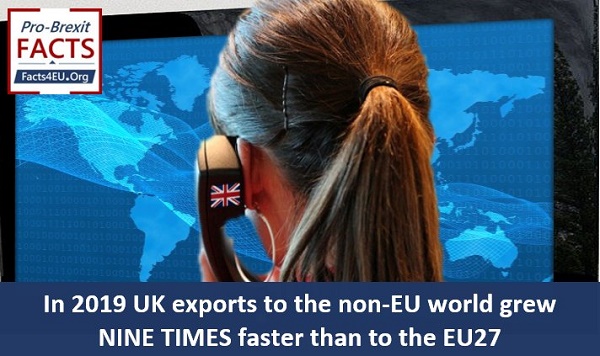 Brexit Britain’s future is bright and it’s out there in the World, not in the EU. Brexit Facts4EU.Org has analysed the latest trade figures published by the Department for International Trade, which came out on Friday (19 June 2020).

Below we present the starkest, simplest, and most revealing summary of the UK’s trade position you are likely to read this year. 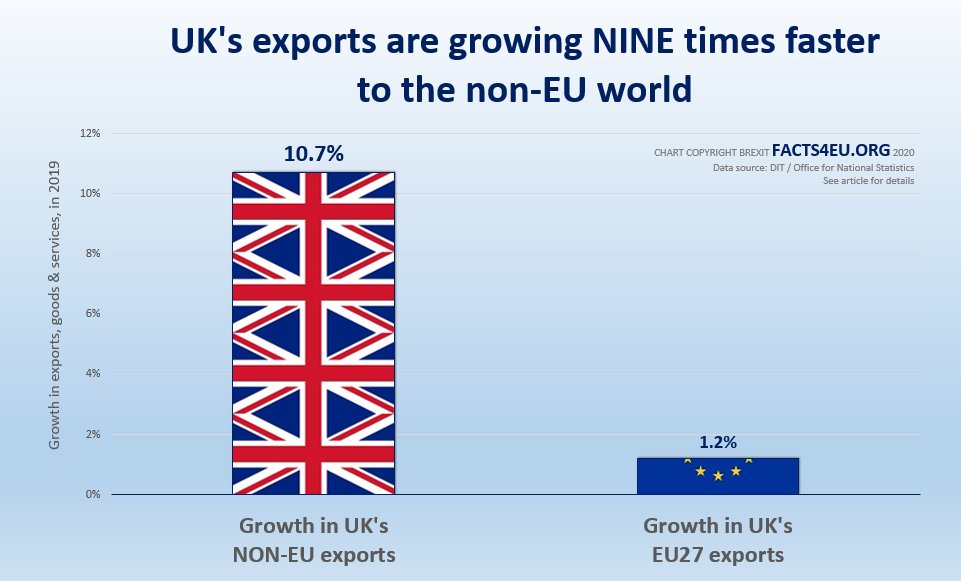 What about the balance of trade?
Where does the UK earn money and where does it lose it? 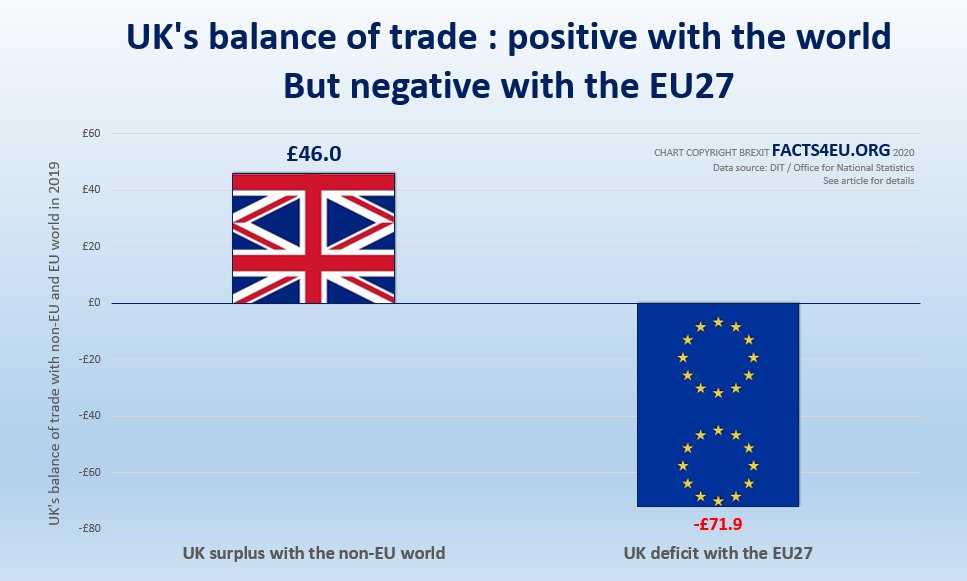 What about the balance of payments with the EU and with the rest of the world?

How many UK businesses actually export?

According to the latest information (for 2018) from the ONS:-

Statistical note: All the above relates to goods and services for the calendar year 2019. All data comes from official sources, including the Office for National Statistics (ONS), HM Revenue and Customs (HMRC), Department for International Trade (DIT), and the Organisation for Economic Co-operation and Development (OECD).

Is the World ready?

In the last month serious negotiations have started with Japan, Australia and New Zealand, and they continue with the USA. These talks are in effect continuations of the talks started by the Rt Hon Liam Fox MP, when he was head of the Dept for International Trade.

The new boss there is Liz Truss, supported by Greg Hands. 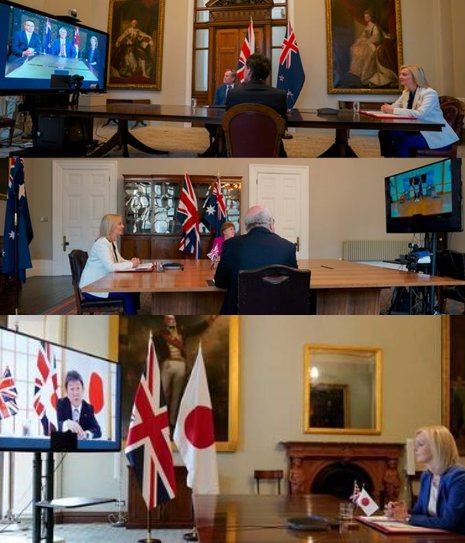 What’s it really all about, Alfie?

During the 2016 EU Referendum, the official “Stronger In” campaign - backed by the Cameron/Osborne Government and the entire British and Global Establishment – sought to argue on economics. Well, that and an imminent World War Three, and plagues of locusts landing in the Home Counties.

In reality the argument which resonated with real voters was of course about the seemingly-inexorable dis-empowerment of the British nation by an over-reaching, dysfunctional, and unelected eurocracy of frankly mediocre and overpaid officials in Brussels.

Nevertheless, the official Remain campaign chose to focus on the economy.

How has the UK’s trade been with the EU27 over the last 10 years?

One of the great ironies of the last four years since the Referendum, during which the British people have had to endure the most appalling behaviour by ‘the elites’ in Westminster, in the media, in think-tanks, in the luvvie world and elsewhere, has been that the Remain side got it so wrong on one of the main areas they focused on – trade and the economy.

Amazingly, this battle is not yet over. Despite producing otherwise excellent figures last week, some civil servant at the Dept for International Trade still manages to write the following:

The figures are correct. The characterisation is pure Remainer drivel. To describe a fall in the EU’s share of the UK exports market from 48.3% to 43.0% as “slight” is not only absurd, it is a serious falsehood. It was very disappointing to read this, amongst so much good work.

The fight isn't over yet

When will Remainer civil servants and others finally give up the fight, admit they were wrong, and get behind Great Brexit Britain?

If you can help us to keep getting the truth out there, we need your assistance today. If you believe in freedom of speech and a fully-free and independent United Kingdom, please donate something, using the quick and secure methods below this article. Your support will be fully confidential unless you tell us otherwise and you will receive a friendly email from a member of our team. Thank you so much – we need you.

[ Sources: Office for National Statistics (ONS), HM Revenue and Customs (HMRC), Department for International Trade (DIT), and the Organisation for Economic Co-operation and Development (OECD) ] Politicians and journalists can contact us for details, as ever.

It is great news!

This is the future, EU about to suffer rapid contraction of their economies. UK got this right at last.

Happy Brexit day everyone! Four years on, outside the EU and the UK is booming!
I would like to thank all the Remainers who gracefully accepted the vote and the MPs who passed the necessary legislation so quickly.
Well done too to Mrs May and her team for negotiating a trade deal that benefits the UK and our friends in the EU. Some said that it would be impossible, but the talks were conducted in good faith and friendship, knowing all would benefit.
I welcome Germany and France's decision to pool their sovereignty, pull down their borders leave the EU and abandon the Euro.
Renaming the new country will cause some debate! Any suggestions for a new name?

The negotiations aren't about trade.Their about how the EU can keep us tied as close as possible, extract our money,And retain claim to our assets.During the Theresa may fiasco they were happy as a pig in ,,,,. They had lots of help from treacherous UK remainers and officials.(they still do) now the time has come where they can actually see that we will be fully leaving,And they don't like it. In fact it scares them. They have brought this all on themselves. We must remain vigilant,As they will not stop trying to overturn this process.
Its despicable that so many have been willing to damage Britain over the years for personal gain.
Woe betide them. We will not faulter.

On this day four years ago, at this time, 'remainers' had no problem with accepting the forthcoming democratic decision nor with the conduct of the referendum. This included the 'Stronger In Europe' (to give it its proper & deliberately misleading registered name - I wonder why such a misleading name was accepted by the EC?) group & all the subversive EUlings. I wonder what happened in the next 24 hrs to change their minds?
Four years ago today we gave our verdict, yet we are still paying & obeying today, & seemingly & pointlessly will be for another 6 months 9 days .
4 years; 1,461 days; 48 months into a 'two year' exit from the Treaties. It's a disgrace. Have the EU placelings been removed? No.
I see that the poisonous Mandelscum has put himself forward for the 'British' representative position on the WTO. Can you see what it is yet?
We are watching, & for those who's desire was & is to sell out our country, we will not forget you.

(7) Yes, always 'Europe' rather than 'European Union' - so 'Stronger in the European Union' would be the point I think you make. Similarly, European Court of Justice / Court of Justice of the European Union being accurate. Note that there is a 2nd reading scheduled for July 10, of the Bill in the HOC ' EU Withdrawal (Implementation Period ) Bill 2019/21'. A Private Members Bill ( or a backbench bill ) presented to Parliament 20 May and sponsored by the Lib Dem MP E. Davey (Sir ) The purpose of such is to change the law, although seldom does but by creating publicity around an issue such bills may affect legislation indirectly. This is basically to do with requiring HM GOV to seek a 2 year extension of the 'implementation period' & repealing the prohibition on agreeing to such an extension, under various Articles of the Withdrawal Agreement. We already have the Government's assurance that there will be no extension & that is as we know, currently written into law but efforts persist to change that.

Thank you Patrick F, comment 3 and happy Brexit Day to you too. If and when we we finally get out on 31 Dec 20 it will have been 1652 days, not counting 23 June 16,.
To put that into a context, more time will have passed than the entire duration of the Great War. In the equivalent time period the Settle and Carlisle Railway would have been almost completed after overcoming severe engineering obstacles and enduring high loss of life.
-
Referring to Diane, comment 8. The second reading of Ed Davey's bill was originally scheduled for 12 June. It could have done some damage had it gained any traction at that stage i.e. before the 30 June extension deadline. But, as Dianne said, the second reading was delayed until 10 July thus rendering it virtually useless. You can read about Davey's reaction here https://www.theneweuropean....
Not only that but also on 12 June, the very day that the second reading was originally scheduled, Michael Gove was telling the EU-UK Joint Committee that there would be no extension. PRICELESS !

Thanks Derek L for the comments. There is a good piece on The Conservative Woman website today 23/6 titled: " Be afraid, be very afraid, about this Brexit fudge" Somewhere a week or so back I also came across a comment, I don't recall where exactly nor by whom but citing something allegedly reported / seen in a German newspaper which suggested that ' the deal ' was in fact already 'decided' and that it stated that Brexiteers were not going to be very happy with it. I have never assumed that our exit was going to be easy but if, in the end, when we the public in future question why our government may be unable to act on something or make a decision to the benefit of our country and we are told that it can't due to the EU's law, diktat, control over us then it's Mrs May's BRINO. Digressing, if, as the CW article suggests we taxpayers are to fund Eastern Europe / EU projects (?) perhaps already committed to by our leaders, then I would like to think it may be funded from the UK's Foreign Aid budget, just a thought.