LATEST: France received 2.5 times as much in EU farm subsidies as the UK last year 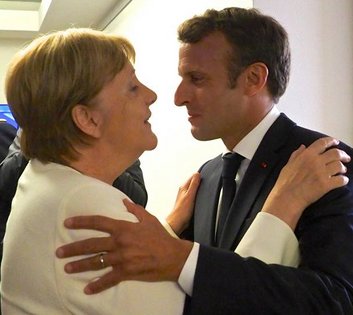 The French still go ‘CAP in hand’ to the EU for subsidies after 62 years of EEC/EU membership.

Here, Brexit Facts4EU.Org looks at one aspect of the amazing story of how the second-richest EU economy has played the EU benefits system for decades and got away with it, taking billions per year in subsidies for its inefficient farming sector.

The UK’s economy is slightly larger than that of France, but its population is smaller. One significant area of difference is that France still retains a sizeable rural economy, subsidised by the French State and particularly by those few EU countries such as the UK who are net contributors. (The UK is of course still paying in.)

For decades France has fiercely protected one of the first features of what was originally the EEC or ‘Common Market’ – that of the Common Agricultural Policy (CAP). It has done so because it is by far the biggest beneficiary of what are effectively subsidies for running an inefficient agricultural sector.

Look at how much French farmers receive 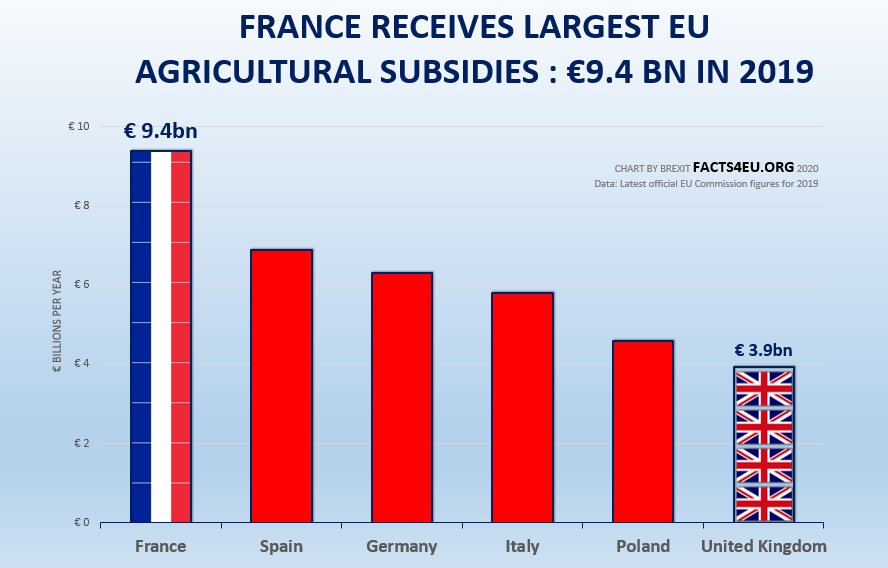 This made it the recipient of by far the biggest EU subsidy.

With the UK receiving just €3.9 billion Euros, this means:

France has been receiving over 2.5 times more rural and agricultural payments from the EU than the UK

Brexit Facts4EU.Org deals in the reality of the EU – including the way the EU gets money from the few net contributor member states such as the UK, and the way it spends that money. We look at the way decisions are made and at the nature of those decisions.

In short, we see the EU for what it really is.

By contrast, for years we have seen, heard and read Remainer-Rejoiner politicians and commentators in the UK on a daily basis, talking about what they think the EU is and does. They present a happy valley where ‘all is for the best in the best of all possible worlds’, as the French philosopher Voltaire had it. Alas, they are all sadly deluded.

Unfortunately, the ignorance of Remainer-Rejoiner MPs and campaigners doesn’t stop them lecturing the British people as if they actually knew what they were talking about. Day after day we produce solid evidence such as that above, showing that the EU is profoundly dysfunctional, undemocratic, warped in its thinking, and unrepresentative of the peoples of the individual member countries.

All of the data we researched to produce this article came from the EU itself. It’s up-to-date – or as up-to-date as the EU ever is. Remainer-Rejoiner MPs and campaigners can’t simply dismiss information like this. They have to face it, and then tell the British people why they still think that the voters got it wrong four years ago this week.

If countries like France want to subsidise their agriculture and their rural economies, (something which the British government will do post-Brexit), let them do it themselves.

Finally, the work involved in producing real information like that above is considerable. Please help us to keep going, with a donation today.

Once again, you guys have highligted the failings of the dreaded EU.
Thank you from a Brexiteer, i just hope we do leave under WTO rules!!

An excellent article which shows up the EU for what it is.
Words borrowed from the above chart also prove another little fact that establishment remoaners conveniently cast aside:
"In 2019 alone, the EU says it spent €54.5 billion on the CAP"
"France received €9.4 billlion of this"
-
This article threw up an obvious question in my eyes:
WHO PAYS THIS HUGE AMOUNT OF MONEY TO FRENCH FARMERS?
Think about it for a millisecond?
Then consider the UK NET contribution to the Brussels scam is actually more than this amount.
I suggest it reasonable, therefore, that UK taxpayers are funding the entire amount of CAP on a silver platter to the French?
In the UK national interest, British farmers come before French farmers, so is it not time Prime Minister Johnson withheld a large proportion of the UK NET amount, especially when the EU commission abuse our country because we left their political construct?
Like I always suggest, if the EU want their club, THEY PAY FOR IT?

You people all get it! The French and Germans have always been the main benefactors of the EU cash mountains!
Whatever happened to the milk and butter mountains? I never hear of those anymore.
I cannot wait for the collapse of the EU political nonentity.

This must stop, subsidise our own farmers. They are this country's future!

Douglas V you forgot fishing. France only finally relented to allow the UK to join after the fishing was agreed ie that France would be allowed to plunder UK waters.

I totally agree, John of Wales Point 2. The EU have broken terms of Membership by banning the UK from some of its crucial meetings, as we have left. Delays on leaving have been caused by 'Trade Deals' with the EU with them wanting everything on their terms alone. Never has been a 'level playing field' just as pay-outs on Agriculture have never been either! EU delay tactics means Britain is still contributing huge sums into the EU Kitty: Foreign Aid. Defence Force., Agriculture, Immigrants who are, incidentally, escorted into our waters by whom? The French. A few of the costly and damaging issues for us. The last thing we want is a disadvantageous Trade Agreement, as the EU bureaucrats are clearly winning by continuing to cream money from Great Britain during this Transition Period. We went into a 'Transitiion Period', ending 31 December 2020, believing, foolishly, that the EU truly wanted Trade Agreements with the UK. Clearly not so. No more delays/extensions. 'We delay, and you Suckers Pay' could well be Barnier's Mantra.

Let's subsidise our own.