It’s 17 million “Flag offs” from the EU, in a shocking final act of hypocrisy

Brexit triumphed over a day of nausea-inducing, maudlin, EU-speak from Rejoiner MEPs

Yesterday the EU Parliament approved the exit agreement of the UK from the EU. The vote (621 to 49, with 13 abstentions) had already been decided the week before, as we reported last week. The real news was that the EU also inadvertently chose this day to give an award-winning display of its breathtaking hypocrisy and totalitarianism to the British people and to the World.

Putting aside some typically-uninspiring speeches in the massive and very expensive hemicycle that is the EU Parliament in Brussels, the headlines were all about Nigel Farage and the Brexit Party.

Below we expose the staggering and suffocating hypocrisy which infects the EU from top to bottom, exhibited yesterday in one afternoon in Brussels.

EU cuts off Mr Farage for an invented offence, but allows blatant propaganda which IS an offence

Yesterday Nigel Farage was finally allowed to speak in the EU Parliament’s debate on the Withdrawal Agreement which sees the UK formally end its membership of the European Union tomorrow (Friday) evening at 11pm GMT.

As was to be expected after 20 years’ at this institution, Mr Farage delivered an excoriating speevch in the four minutes allotted to him.

[Source : We chose to use the LBC’s version as being the best, out of the many versions available on YouTube.]

Towards the end of his speech Mr Farage waved his small Union Jack flag in a gesture of farewell, upon which his fellow Brexit Party MEPs followed suit.

As readers can see from the video, the Irish Vice-President of the EU Parliament promptly cut the sound from Mr Farage’s microphone. She then said the following:-

“If you disobey the rules you get cut off. Please sit down, resume your seats, put your flags away, you’re leaving, and take them with you”

Brexit Facts4EU.Org took a look at the “Rules of Procedure of the European Parliament”. [More correctly the EU Parliament - Ed.]

Rule 10.3 under “Standards of conduct” for MEPs states:-

“Members shall not disrupt the good order of the Chamber and shall refrain from improper behaviour. They shall not display banners.”

Readers can look at the full copy of the rules here.

So, banners are banned, flags are not – yet anti-Brexit banners were allowed everywhere yesterday

Below are pictures of anti-Brexit British MEPs in the chamber yesterday, clearly waving banners. We start with prominent Labour MEP Richard Corbett. 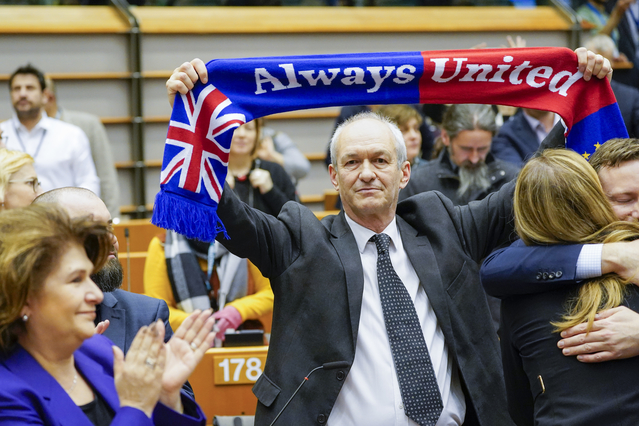 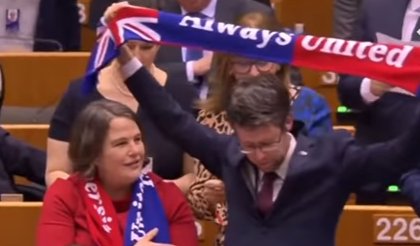 Readers with strong stomachs may view the video of this here.

Just when we think the EU can’t get any worse, it does.

There is a serious point here apart from the blatant hypocrisy of the EU and its totalitarian and bureaucratic structures such as the EU Parliament, Commission, Council, and the EU’s hundreds of agencies.

Just think for a moment about the arbitrary banning of national flags in the EU Parliament – something which is not written in the rules but which exists in practice as readers can see above. The reason for this is simple. The EU is quietly airbrushing out the very concept of national identities from the minds of the citizens of all its member states.

Thank goodness we are leaving this dystopian nightmare tomorrow evening – albeit in name only.

Tomorrow we will publish again, even though it does not fall within our new Tues/Thur/Sat publishing schedule which we introduced two weeks ago due to lack of funding. Tomorrow is problematic for many people. As the Brexit Party’s Chief Whip Brian Monteith said this week, “the Withdrawal Agreement stinks.”

That said, we all deserve a celebration of sorts. Let’s be “glass half-full” people tomorrow – what do you think?

Once again we must reach out to our readers for financial support to keep going this year. Quick and secure donation methods are below. Thank you for anything you can do.

[ Sources: EU Parliament | EU Parliament Rules and Regulations 2020 | Brian Monteith MEP in The Scotsman ] Politicians and journalists can contact us for details, as ever.

One rule for you, but not for me, just occasionally for show. We are confident nobody will (a) notice or (b) pay any attention. That's the EU and rules. (Sorry, EU, we've got Facts4EU)
Level playing field? Nah, we the EU have a pitch-wide goal, we play downhill, and we have all the referees on our side, and we've inserted barriers and trip traps.

Was Mairead McGuinness cutting off Nigel Farage's speech a typical show of the totalitarianism of the EU Parliament and Commission. The Commission run by unelected officials is a travesty of democracy.
Every time I see Marcel Barnier, the top EU bureaucrat on television I am reminded of Yes Minister. That superb mockery of a runaway administration - the tail wagging the dog.
Unfortunately we will be seeing and hearing a lot from Monsieur Barnier this year.

Mairead McGuinness displayed the petty authoritarian nature of the EU and it's officials and a complete lack of grace when she cut off Nigal Farage mid sentence during his valedictory speech. Allowing pro-EU MEP's to wave their Union Flags later on, displayed to the world the hypocrisy deeply embedded in the EU institutions we have come to expect. One rule for us....

Are we then to accept that human nature is intrinsically vicious, or merely temporarily corrupted by Political, economic, and ecclesiastical institutions? I'm stil for leaving this putrid den if iniquity without a deal. Can this nation really afford to keep paying ( throwing away) exorbitant amounts of money that will gain this nation practically nothing in return but to keep alive and support a Socialistic catastrophe, doomed to fail.

Did the European Council, Commission and Parliament have any other option than to vote for the UK's acceptance of the Withdrawal Agreement they drew up?
Yes they did, but not one they were prepared to take. It would have meant the UK immediately becoming a Third Country, the cliff edge, trading on WTO.
They now have a grace period of 11 months during which they can try to regain some of the many benefits and controls lost in the repealing of the European Communities Act 1972.

Yes expect Project Fear to ramp up again amidst threats and dire warnings from Brussels and their puppet in Dublin, along with squeals from the big multi-nationals. Encouragingly, The Telegraph reports today that Boris will accept border checks as a consequence of non-alignment. So it's good to see Barnier rebuffed early on, but remember that Theresa May talked tough at the start as well, and we know how that panned out.....

No one can surely be surprised at the hypocrisy anymore?
I was saddened listening to LBC Ferrari this morning at some of the obvious remainer callers, they are so hypocritical and without sound arguments. I am so pleased that we are leaving. I would have left 3.5 years ago with no deal. To me it was the only sensible, logical way to respond to the most incredible democratic decision made by the people . I cannot remember a more momentous day when I realised that all the claptrap of the socialists had failed and that we would leave.
For that I admire Nigel Farage for laying down 27 years of his life campaigning and telling the EU what he things of them. I want to thank also the many people in all of the various leave campaigns. Thank you for finally reversing the idiotic decision to join the EEC, when our liar eszablishment knew exactly what was the end game of the EEC now EU.

I see also in Breitbart today another indication of the abject failure of the EU: "Paris Migrant Camp Cleared for 60th Time Since 2015" - that figure just beggars belief. No wonder Paris especially is in chaos.

Also in Breitbart are the results of a 'You Gov' poll - Only three in ten Remain voters have reached the phase “acceptance” in the five stages of Brexit grief
When asked this month, nearly one-in-five — 19 per cent — of Remainers were still in the stage of Denial, refusing to believe that people in the UK really wanted to leave the EU. Sixteen per cent are stuck in the second phase, Anger; three per cent are Bargaining, believing that Brexit “can still be averted”; a quarter are at the fourth phase, Depression; and just 30 per cent are at the Acceptance phase.