Talking of Dominic’s "weirdos and misfits"….

Well, here's one proud group of Brexit misfits for you 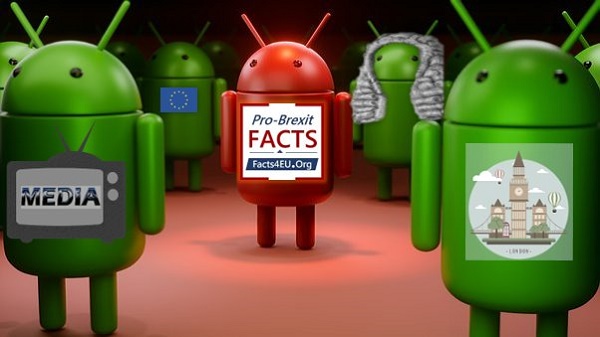 Weirdos in a weird world

Readers will have seen reports about Dominic Cummings’ blog yesterday, calling for applications from “wild cards” and “weirdos and misfits with odd skills” to apply for positions at No.10.

Here at Brexit Facts4EU.Org we can identify with at least one of the characterisations used by the Prime Minister’s chief adviser yesterday. During the last four years we have frequently felt like outsiders – misfits and weirdos, if you will – in several ways.

Firstly there is the Establishment – Remainers almost to the last man and woman – with whom we have much in common in personal ways, but with whom we share very little in common when it comes to group-think, ideology, London-centricity, and of course Brexit.

Secondly there is what we refer to as the “Brexit Establishment” – high profile groups containing firm Brexiteers for the most part, lightly-dosed with some individuals of dubious commitment who obtained jobs there for personal career advantage. We refrained from “blue-on-blue” (friendly fire) attacks on what some of these people got up to in the last four years, but let’s just say that sometimes it took a supreme effort for us to do so.

Finally there is the group we might call “friends, family and colleagues”. Here, we are sure, many readers will share our sadness at the stress caused in personal relationships as a result of holding differing positions on Brexit – and indeed holding differing views on the Establishment as a whole.

We would also like to highlight a particularly pernicious aspect of ‘Project Fear’ – that of the fear engendered in ordinary Brexiteers in their daily lives by the Remainer Establishment and its followers. The abuse, spite and ridicule dished out on a daily basis caused many Brexiteers to keep their mouths firmly shut. All across the country there are still those who are scared to speak up, for fear of what it might do to their personal and professional lives. This will prove to be one of the major disgraces in our country in the last few years, and it will still take some time before this atmosphere changes.

We are misfits and proud of it

As we approach one of the major milestones for which some of us have worked seven days-a-week for four years to achieve, are we proud of the part we have played? Yes, quietly proud. Brexit Facts4EU.Org was never about being a platform for launching careers in politics, or for becoming paid pundits on the BBC, Sky, or in the mainstream media.

Instead we continuously pumped out well-researched reports on a daily basis on all aspects of the UK’s membership of the EU, and of the EU’s very nature. Using nothing but official information, we delved deep into the detail to bring readers the largest original output of facts of any Brexit organisation in the country.

All of it was summarised with handy bullet-pointed boxes and charts. All of it came from official sources. And a great deal of it was used by campaigners up and down the country in the Referendum campaign and in the subsequent EU and UK Parliament elections. We were particularly proud when our information was used by politicians inside and outside the UK and EU Parliaments.

Being a misfit comes with costs. In our case it has come with an enormous cost to certain individuals in our team. With no funding from a rich backer (which is the case with some Brexit groups), no support from the large Brexit organisations who received the lion’s share of public donations, and no fees from our work being used (frequently with no attribution), it’s time to cut back.

That said, “man cannot live on bread alone”. With some of the Brexit Facts4EU.Org team’s savings exhausted, and only a small percentage of our wonderffully-loyal readership able to make donations to our work, we now have to scale back so that some of us can earn a living again.

Will you continue to read and support our work?

Our plan is to move to a different working schedule. Instead of working and publishing seven days-a-week, we intend to publish on Tuesdays, Thursdays, and Saturdays, for as long as we can.

After all, three days of well-researched and original output per week is still a significant contribution to the overall effort to see Brexit through!

Finally, we know it’s just after Christmas, and money is tight for many people, but we really could use your financial support right now in order to fund our continued – albeit reduced - operation. Thank you to all who have donated in recent days. If 500 more of you could do this, we would be secure for the next few months!

[ Sources: Dominic Cummings' blog ] Politicians and journalists can contact us for details, as ever.

Just adding one core characteristic of your team - patriotism. Thank you.

I'll keep my fingers crossed that peple will carry on supporting you. I've just subscribed to your Brexit Index (something I was planning to do for a while but just never quite got around to doing it) and I already enjoyed reading through some of the articles. Impressive amount of good quality work - I would recommend it!

Hard enough for the Facts4EU to keep going, keeping inspired, working long hours on behalf of all of us who voted Leave, but to do so without sufficient funding must have made the task even more gruelling. After all, how much do we spend on fripperies in life? So, totally understand your cutting back on your time and output. You have issued many appeals for funding. But with an upturn in events, yes it is time for each and every one of you at Facts4EU to think about your own situations. Easy for us, your readers, on salaries or pensions, easy for the Prime Minister on his wages, but for Facts4EU you are to be praised to the rooftops for your selfless service to this Nation. It's called 'honour' and sticking to your principles and serving your Country. Yes, Patriotism. I am so grateful and so, so proud of your unstinting and solid teamwork.

I'm up for it, I'm a healthy 77 year old,& a logical forward thinking person, who doesn't over complicate issues, & believes in tackling problems for the long term using the cause & effect principle.

Thank you. Your work in keeping up our spirits has been outstanding.
But - I don't think we or you are the 'misfits'. We may well be in the majority - as the latest GE seemed to show. Not everyone was voting AGAINST Labour. Many - perhaps more than we can guess - want to get out of the EU asap. It's the MSM that is trying to make us believe that we are a barking mad minority. SO:
''Say not the struggle nought availeth
The labour and the wounds in vain,
The enemy faints not, nor faileth,
And as things have been, they remain....
If hopes were dupes, fears may be liars,
It may be, in yon smoke concealed,
Your comrades chase e'en now the flyers.....''
And - thanks to you - possess the field!

Dear Team - if only I could win the lottery!!!

I guarantee my continued support for the well researched facts provided by Facts4EU.
MPs, MEPs, peers, and International readers, should understand why Facts4EU.org was 'born' in the first place.
It was important to remain non-partisan so it could never be accused of bias - except where comment was justifiably required.
It was to provide 100% well researched FACTS to the electorate and MPs from official [usually EU] sources - and shine a bright light on all that was being done in our name without consent.
I've been challenged many times by remoaners and directed them to Facts4EU to get specific facts - never heard from them again! Facts are facts they could not challenge, so lost their argument yet continued to whinge!
THE 'BREXIT INDEX':
One only need view the abundance of Brexit FACTS held within the largest single repository in the fully searchable 'BREXIT INDEX' to realise the huge number of EU institutions our leaders were very quietly signing our country up to.
They were spending £hundreds-of-billions of British taxpayers money overseas, plus questionable 'foreign aid'.
I refer to many things signed up to post-referendum AFTER our country returned a clear majority decision to Leave. Yet our leaders and remain MPs continued to act as though it never happened. They could not bring themselves to admit to the electorate of their misinformation - otherwise known as 'project fear'.
As a staunch Brexiteer, I've been called all the names under the sun for decades, whilst still respecting the rights of others to hold opposing views to my own - that's what democracy is all about - where the most important factor is 'losers consent'.
Once again, a sensible electorate removed many MPs from power and now we have a working Parliament (we cannot remove unaccountable [failed] EU commission leaders).
I sincerely hope readers continue to contribute whatever they can, be it large or small.

Off-topic
Dear fellow Brexiteers, please consider this, whilst also remembering Brexit has not yet happened.
How many cups of tea/coffee do you go through in a week? How much do they cost you in total?
They cost a whole lot more at the railway station and on the the train where available.
Could you have one or two cups less each week and instead use those few pounds to support the 'Brexit Index', for example.
Maybe have one pint less at the pub, but use that money to support the site?
This is a good way of repaying the continuing debt of gratitude we owe the Brexit Facts4EU team by keeping these official facts 'alive' for one and all. The 'value' of these facts are of huge importance to our country. Thank you.

Excellent comments that I agree with completely. If I won a lottery I would fund this website.
I agree that even three days a week can still be powerful.
We must not get complacent as I trust very few politicians. Look at the headlines of this week. Labour and Liberals are still trying to put spanners in the works........
I admire the Facts4eu team, and anyone else standing up to be counted with regard to the EU, I hope and pray the country leaves when it is said we will now leave.

I don't like Dominic Cummings’s slovenly dress code but his crackdown on civil service is long, long overdue. The British swamp extends from Westminster through the civil service to the loacl councils. The whole lot needs a very broad sweep and clean up before the country can shine again afte leaving the evil union.