47 years of ever closer confinement, and the key will finally turn in the cell door tonight 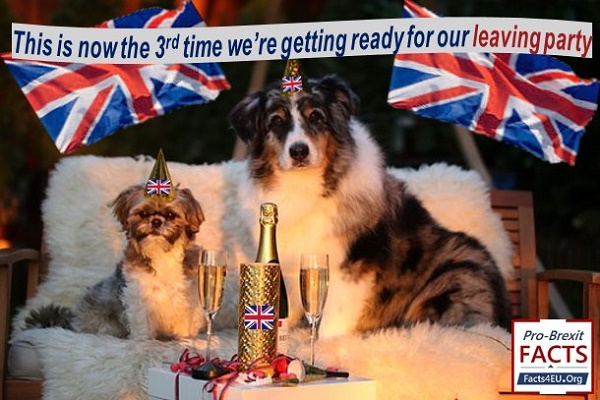 After years of battling the totalitarians of the Establishment, yes we WILL party triumphantly tonight

Many readers will have awoken this morning to the dawning sensation that today’s finally the day. The day that sometimes felt as if it would forever be beyond reach. A dream – existing in the centre of a nightmare – that was often promised but always snatched from us.

The run-up to today’s event harks back to January 2013, when Nigel Farage’s UKIP was starting to pose a real threat to the Conservatives. Prime Minister David Cameron was then leading a coalition government with the LibDems of Nick Clegg. Six years and eight days ago, Mr Cameron made a speech in which he finally promised an “In/Out” EU Referendum to the British people.

This In/Out EU Referendum was finally delivered on 23 June 2016, by which time Mr Cameron was heading a Conservative government, and the Referendum could no longer be blocked by the LibDems.

The Referendum took place after a constant avalanche of state-sponsored propaganda during the campaign prior to the vote. Brexit Facts4EU.Org – and the majority of our readers – had been valiantly trying to ensure that actual facts reached voters, rather than the quite shocking disinformation by the government, by virtually the entire Establishment, and by a swamp of global bodies roped in, even including a fly-by from US President “Barack of the Queue” Obama.

On today of all days, we are not going to pull our punches. Do we feel a sense of triumphalism? Yes, to be honest. And why not?

We are being told by the rump of extremist Remoaners (gradually re-branding as Rejoiners) that Brexiteers wish to “rub their noses” in the exit of the United Kingdom from the EU tonight. In fact, we will barely give them a moment’s thought, even though these people have made the lives of so many people (including us) miserable in the last four years. Their behaviour in many cases has been simply shocking and totally unacceptable but it’s up to them to live with that.

Instead, we will be raising our glasses to the largest number of voters in British electoral history, who saw through the lies of the Establishment and delivered a people’s verdict. And their verdict was to leave the EU and become a free and sovereign country once again.

Tonight we will see the first step on this road to freedom.

Tonight the equivalent of 18 member countries will leave the EU, as the UK regains its freedom

We were the first to produce charts showing just how important the UK really is to the EU, with our comparison demonstrating the relative sizes of EU economies. The last ones we produced are below. 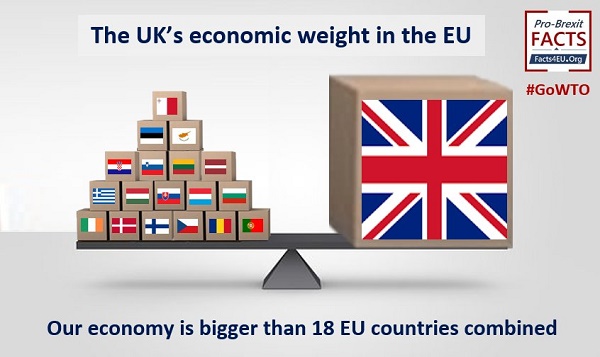 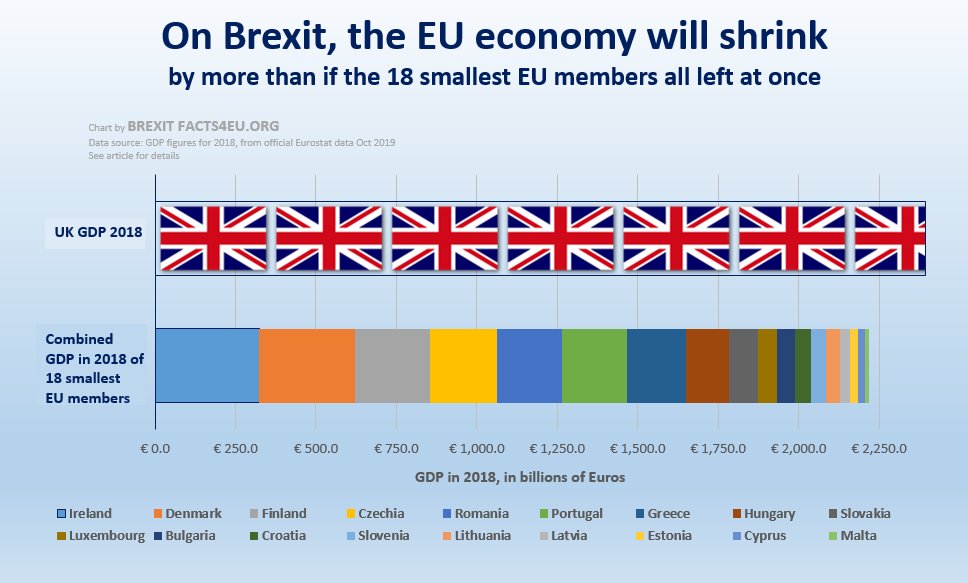 Gradually the information we produced like this started to get taken up by politicians and even sometimes by large Leave organisations. Despite not being credited, we were delighted that these messages started to get out there.

As we celebrate tonight, the reality for the EU is that the UK’s departure is the equivalent of over 18 EU member countries all leaving at the same moment. The EU28 becoming the economic equivalent of the EU10.

Our glasses will be half-full

We can’t pretend that the technical exit of the UK from the EU at 11pm GMT tonight is the form of result we desired. It is certainly not what we spent the last four years, seven days-a-week, working for. We are where we are thanks to four years of Establishment closet-Remainer activity at the heart of government, as well as the uselessness of parts of the large Leave organisations.

Be that as it may, at 11pm this evening the United Kingdom will no longer technically be a member of the European Union.

Now THAT is something. Indeed if we just focus on that one fact, it’s wonderful. It’s marvellous!

You, dear readers, have achieved something important. Something which can inspire peoples across the World.

You have shown that the totalitarian, globalist, quasi-Communist, group-think direction of our European part of the World is not unstoppable. The EU dictatorship may have been able to ignore or overturn the referenda in other EU countries, but when confronted with the British people they have met their Waterloo.

Tonight we will raise our glasses to you all. Be very proud, please.

A slight difference in thought. The door to our cell was unlocked and opened on 23rd June 2016 by the people, who voted to leave. We are now standing in that open doorway but are not yet stepping through. It is not yet what was democratically voted for & the people still await the proper implementation of our democratic mandate, and we are watching & judging. Do not take our silence as consent. Leaving the EU Treaties does not mean signing us up to EU controls again by back door means. We meant what we voted for.
That said, a big thank you must go to all the unsung & unknown heroes - the boots on the ground, who are the people who have really got us the referendum and this far over many years. Their tireless, often thankless & unpaid, dedication against all odds are the heroes of leaving the EU. Many of the monied big boy organisations are closing down tonight. The small, independent & mainly unsponsored ones, like Facts4EU & others, will continue as it is not yet certain whether the Government will actually deliver the mandate, so please donate to these if you can. They WILL be the only avenues of truth going forward. 'They' are hoping that people will go back to sleep as they claim 'Brexit got done', but 'Brexit' is not leaving.
So tonight I will celebrate & mark the occasion, but my toasts will be for the unsung heroes of Leave. An interim big thank you to the Facts4EU team for being one of those heroes.

Comment 1 Not4EU, I could not agree more! After 47 years of total lies about the real purpose of the EEC/EU by the establishment and the EEC/EU, I am so happy that this is happening. So pleased that the votes of my parents to not join the EEC is finally being dealt with by leaving.
I am also thrilled that London-centric is going to be less. I always disliked London coming from the Midlands myself. I hate the way our industry has been decimated under all governments during the last 47 years. We have even seen a UK steel works dismantled (as uneconomic) and delivered to the far east and reassembled and continues now to work! Madness.

Were nearly there. We have to grit our teeth and make sure the Conservative MP's we put back in Parliament give nothing away again.
Repealing the European Communities Act means we start with a clean sheet. We are no longer in the CAP, CFP, ECAA, EASA and many other EU Agencies.
I repeat what Sir John Redwood has to say: "The new Parliament has a clear majority to leave, and a clear majority that Leave means an exit from the single market and Customs Union as well as from the EU Treaty. That is all very positive. It is important now that the UK government is firm and strong, as well as polite and positive in its dealings with the EU. There must be no sacrifice of our fish, no offers of more money, no acceptance of continuing ECJ jurisdiction. They need a Free Trade Agreement more than we do, and are more likely to grant one if we are firm.
A Die Welt journalist writes: "Many Bundesburger worry that after the British exit, Germany will be stuck in a union surrounded by freeloaders - - those members for whom integration means a joint pot of money with no strings attached".
Like Greece that's their problem.

We have a 20.000 strong group marching to the white cliffs of Dover. From the west approaches a further 10.000 troops of the Cornish and Welsh contingent,From the North and East ships are coming, Carrying another 10.000 men of the north.
We will stand in celebration on these chalky hills,we will be looking South and East towards the EU. Always watching and listening.
We will camp out on these cliffs and hills until the job is done. We will defend these islands as our family and friends have done so for thousands of years. Rule Britannia!
Britannia rule the waves
Britons never, never, never shall be slaves.

The UK democratically voted for Independence and freedom.
Tonight we get BRINO... yet another battle won on the road to freedom, however the war isn't over.
With vigilance independence will be achieved, but we must be aware that there are many battles still to come.
The 'establishment' sneerocracy will still want to control us for their benefit - let's not let them have that power they crave - make them accountable.
Thanks to all who have done and are continuing to fight for freedom - especially the fact4eu team, I will raise my glass to you all this evening.

A big thank you to BrexitFacts4EU for all you've done. And congratulations for today.
-
It seems you've even managed to win over the Guardian to your point of view today: https://www.theguardian.com...
-
Let's hope the useless parts of this Tory Government (it still retains many Remainers) don't manage to screw up this opportunity - Huawei is not a great start to negotiating trade talks with Aus, US; nor is spending £100 billion on the ridiculous HS2 a sensible decision; nor annexing Northern Ireland; nor throwing away £39 billion through an unnecessary ex-gratia payment to the EU; nor not claiming our £7 billion shareholding value in the European Investment Bank - What else can these useless idiots get wrong? Such incompetence. The mind boggles.

PS - loved the (Mr and Mrs) canine picture today.
Extra thanks to whoever does the graphics - much appreciated - keeps us cheerful most days.
Best wishes, Facts4EU team.
Cheers.
JB

Well done. I am grateful for all the work you have put in to get us to this point, aided and abetted by millions of us little people making the case amongst friends and family.
We will still need to watch carefully the antics of the Remain establishment in the coming months. The beast is not slain until we are completely free on January 1st 2021.

Just read this nonsense in the Express: "Brexit leaves Brussels IN MOURNING as downbeat eurocrats ask 'where did it go wrong?'" - I could tell them that in 15 minutes chat. Seriously if anyone there does not know the answers to that then they are beyond help.