Osborne and Hammond remain silent, as their Remainer 'fear forecasts' turn to dust

Hammond, Lagarde, Osborne - All their forecasts were wrong

In a spectacular double-whammy yesterday, two reports were released which put paid to the last vestiges of pre- and post-Brexit Project Fear. 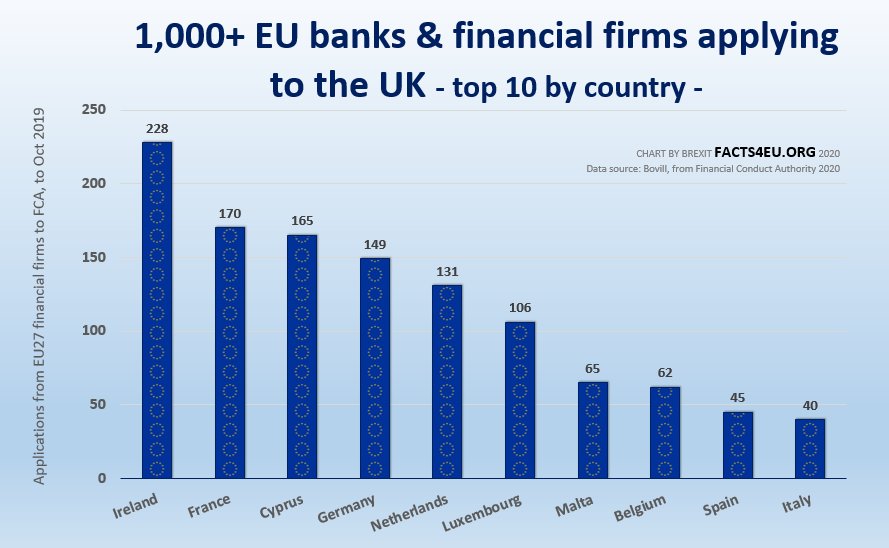 Following a freedom of Information request to the Financial Conduct Authority (FCA) by financial consultancy Bovill, it was revealed yesterday that some 1,400 EU-based firms have applied for permission to operate in the UK after Brexit, with over 1,000 of these planning to establish their first UK office.

Amongst the total of 1441 applications are those from 134 EU/EEA banks, which will either be setting up offices in London for the first time or boosting their current UK presence. Financial firms planning to move to the UK span all sectors in financial services. As well as EU banks, these include EU asset managers, insurers, exchanges and fintech firms.

2. IMF finally puts UK ahead of Eurozone and Germany, in latest economic forecasts

Yesterday the pro-EU International Monetary Fund (IMF) released the latest update to its economic forecasts for growth in the world’s economies. It did so just ahead of the start of the 4-day meeting of world leaders and financial corporations at Davos in Switzerland which starts today.

These figures clearly show that the IMF expects Brexit Britain to outperform the economies of the Eurozone and Germany, even during the undoubted turbulence following the UK’s final departure from the EU. 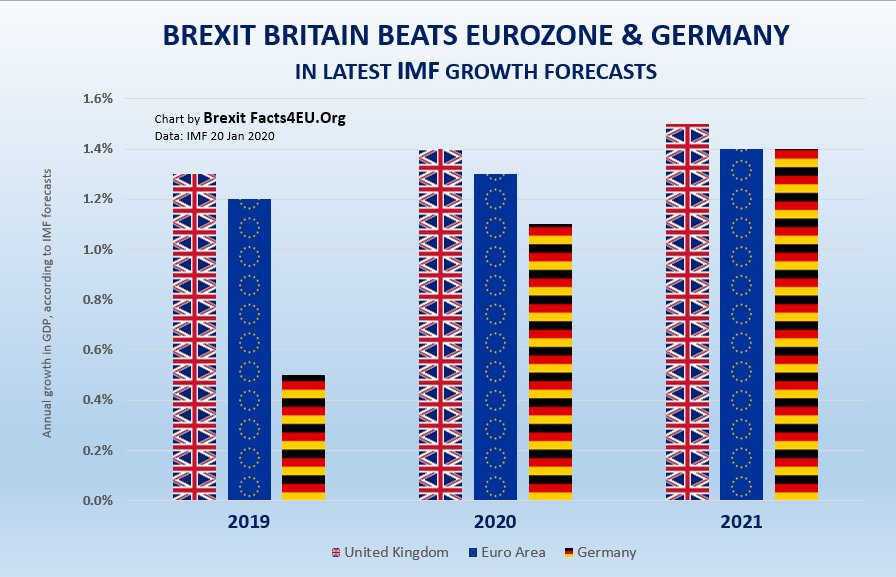 We are delighted to bring readers summaries of two more official reports which provide yet more positive facts about Brexit.

The first report uses data provided by the Financial Conduct Authority and the second is from the International Monetary Fund. Remainers were delighted to use information from such organisations when they promoted Project Fear. We are sure that these Remainers must now be delighted to have been proved so wrong by the subsequent and positive facts, figures, and events. Perhaps they might even apologise to the public... or perhaps not.

The IMF was one of those organisations which was happy to play its part in Project Fear prior to the EU Referendum in 2016, urged on by then Chancellor of the Exchequer George Osborne and the rest of the Cameron Government. This continued after the Referendum under the Theresa May Government and her new Chancellor Philip Hammond, as the Establishment attempted to overturn the largest democratic result in British history.

Until late last year the IMF was led by the arch-europhile Frenchwoman Christine Lagarde. In November Ms Lagarde was appointed President of the European Central Bank. This is despite having been found guilty of negligence by a French court in a massive national financial scandal in 2016.

Yesterday the organisation she led for eight years - the IMF - was forced to revise its figures again, although of course it never expressed this as eating humble pie. Instead, we simply have their plain forecast figures which we are happy to bring you.

The IMF says that the UK will outperform the Eurozone for the three years from 2019. Who would have thunk it?

If you would like us to continue bringing you great Brexit news like this, please donate something today. It’s quick and secure and the options are below. We only have the public to rely on, and unfortunately it seems that far too many people now think Brexit is done and dusted. Thank you for anything you can do.

[ Sources: Financial Conduct Authority / Bovills Ltd | International Monetary Fund ] Politicians and journalists can contact us for details, as ever.

That certainly is good news. It shows the City of London can hold its own in the pass-porting argument. Bargaining over fish should never be entertained. Any temporary continued access to our waters by the EU fishing fleets must be paid for.
Brussels has plans to keep the UK tied to its rules under what it terms a level playing field. It is a device to prevent any competition from outside the EU, by restricting trading agreements. We must not go down that road. It would be almost impossible to define a level playing field and its rules. You can guarantee the Commission would keep negotiations bogged down for years. We would certainly not have an FTA this year

Leaving without a 'deal' was/is/will be the only 'best' solution for the UK.

Brussels plans to impose fines or even suspend trade benefits if the U.K. does not comply with the terms of a planned post-Brexit deal, the European Commission said Monday.
A presentation shared with EU diplomats says that the bloc wants its future relations agreement with Britain to be governed by "efficient and effective arrangements for management, supervision, implementation and review" of the deal's clauses.
The push for robust enforcement comes as the EU insists on the need to accompany the deal with a strong level playing field, meaning the adherence to the bloc's environmental, social and competition rules. Brussels has also noted with concern that U.K. Chancellor Sajid Javid said over the weekend that "there will be no alignment" with EU rules post Brexit.
A graphic obtained by POLITICO shows that the Commission wants to discourage the U.K. from violating the rules of a future deal by establishing a joint committee that seeks to solve disputes via consultations, or starts legal proceedings if mediation is unsuccessful.
In the latter case, an arbitration panel would assess whether the issue relates to EU law, and in such a case send it to the Court of Justice of the EU in Luxembourg for a "binding ruling," or alternatively rule itself on the dispute.
THIS IS NOT BREXIT AND LEAVING EU JURISDICTION.

This is an excellent report, and dare I suggest most EU member countries have woken up and realised what they may lose if they dispense with "good neighbourliness" (re Art50). They cannot expect us to ignore their threatening behaviour.
From various news reports, I see the EU commission is (or may be) planning to give the UK a really bad trade deal to 'punish' us for voting to leave their political institutions. Should that be the case, I would urge Prime Minister Johnson to walk away and let them come to us if they wish to trade into the UK Internal Market?
The UK has been shelling out £billions to the EU just for membership. The better our country performs, the more we have to give away to the EU. It's the biggest scam I've seen in my life.
I suggest if the EU wish to be really awkward on trade (as they like to portray themselves), perhaps we should consider telling them access to the UK Internal Market will cost them a nominal 0.5% (or more) of their GDP? Now the boot is on the other foot the failing EU don't like it.
That said, I'm confident Continental businesses who trade with the UK will wish to continue doing so, and I believe they will at some point turn on the quasi-dictatorial commission, if they haven't already done so.
The UK has performed so much better since the 2016 vote itself, and Continental Europe have tried holding us back. The UK has always had a different mindset to the that of the EU, which is due in part to us being maritime Island Nation.
Control of British waters will be the real test for Boris. Failure on this and he'll go the same way as others.

About 8 months ago I saw an interview with the CEO of VW... who apparently told Merkel that she MUST prevent UK from leaving without a deal, as it it would damage their share of the car sales market in UK !!

VW can keep dreaming with that one Graham, We can always build Our own vehicles again no more German made Emergency vehicles

If the EU blocks the UK from its financial services markets, are we going to do the same in return? If so, all of these european banks must be told to pack their bags and clear off again. Starting with Santender, which has been operating like a British high-street bank here for many years.