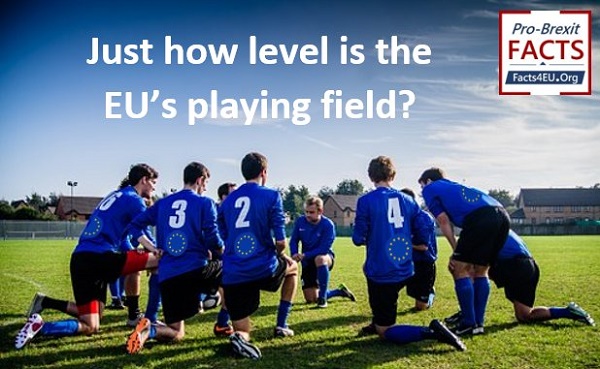 What does the EU say about state aid?

“The Treaty generally prohibits State aid unless it is justified by reasons of general economic development. To ensure that this prohibition is respected and exemptions are applied equally across the European Union, the European Commission is in charge of ensuring that State aid complies with EU rules.”

IMPORTANT: It is the fanatical ideologues of the EU Commission who are in charge when it comes to state aid.

In recent weeks the EU bureaucracy and some EU member countries have been introducing red lines into the negotiating mandate for trade talks with the UK. One of the high profile topics is “ze level playing field”, whereby Monsieur Barnier requires the UK to adhere to existing EU law and all future EU laws.

Naturally we and others – including the UK Government’s head of negotiations David Frost – have pointed out that if the British people had wished to stay under the jurisdiction of a foreign court (the ECJ) and the quasi-judicial EU Commission, they would not have voted to leave in the first place. 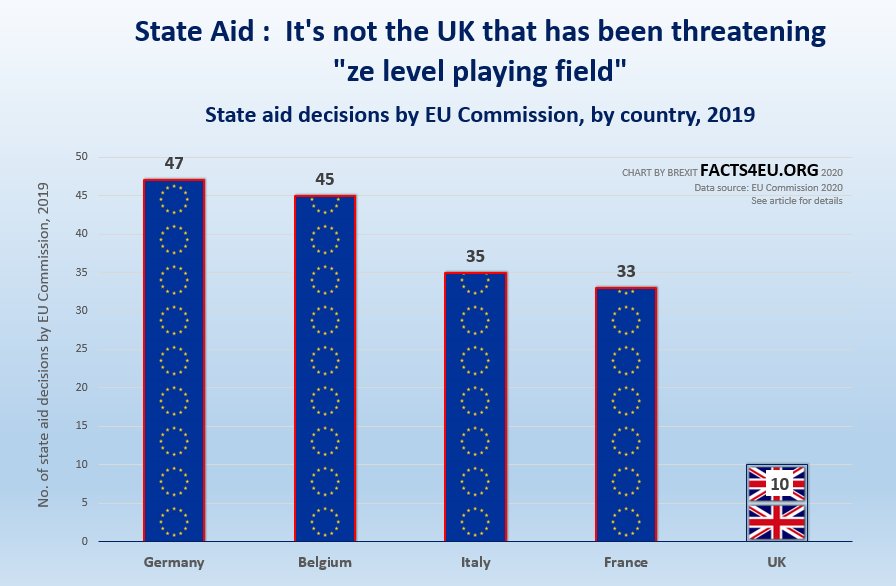 Who decides – the European Court of Justice, or the EU Commission?

One fact which is never explained properly to the publics of EU countries is the involvement of the unelected EU Commission in so many decisive areas of life.

The figures above relate to last year (2019) and come from the EU Commission, which is the first arbiter in most cases of state aid, competition issues, and many other possible “infringements” which can be committed.

So who at the EU Commission deals with competition and state aid?

The first thing to say is that the EU does not have a Commissioner for “Competitiveness”. However the EU does have a “Competition” Commissioner. Margrethe Verstager was appointed by the then EU Commission President, Jean-Claude Juncker, in 2014. 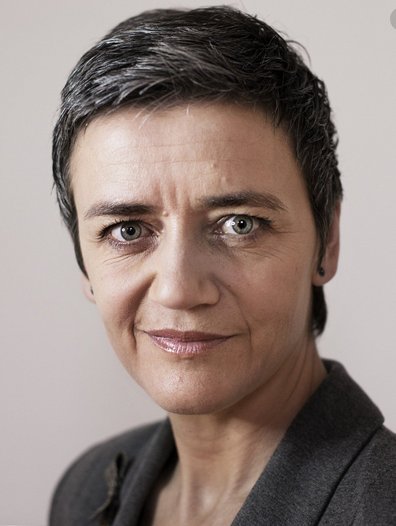 This means that the EU’s competition and state aid policy – and now its additional policies on digital business – will have been guided for a total period of ten years by Ms Verstager, a woman who has never done a job in the “real world” (outside academia, bureaucracy and politics).

It is only when the EU Commission cannot persuade a member country to bend to its will that it refers cases to the European Court of Justice. This, however, is a highly politicised area.

The firm impression that the Brexit Facts4EU.Org team has formed over the years – based on daily scrutiny of the EU Commission’s work - is that countries with governments of which the EU bureaucrats disapprove are dealt with more harshly and expeditiously than, say, France or Germany.

The EU is currently insisting that the newly independent Brexit Britain shall submit to Ms Verstager and her fanatical, super-statist, ideological colleagues, as well as submitting to the jurisdiction of the EU Court.

As someone memorably said to the EU many years ago: “No. No. No.”

It is so important that the Government stands firm on issues such as these. The EU is quite clearly trying to prevent the UK from becoming even more successful on its departure from the clutches of EU membership.

If you can help us to keep going this year, to see this through after so much hard work in the last four years, please make a donation now. Quick and secure donation methods are below. Thank you.

[ Sources: EU Commission | ] Politicians and journalists can contact us for details, as ever.

I've been reading you for a long time now and I still can't undertsand why you seem to be the only people to be always publishing facts on key issues such as this. Do you make your information available to other Brexit groups and the media? And to the government? If you do, why don't they use it? If you don't, why don't you? These are friendly questions because I rate what you do. P.S. I just made a small donation. Every little helps!

The French just cannot understand, nor accept that they are losing control of the Brits which they have held through the Brussels Commission.
Its difficult to assess the pile of paperwork that comes from Brussels, and how it affects our everyday lives.
Back in 2016 the pro EU BBC produced: Reality Check: How much UK law comes from the EU?
The arguments as to the effective percentages are no longer relevant but the numbers are considerable.
If you count all EU regulations, EU-related Acts of Parliament, and EU-related Statutory Instruments, about 62% of laws introduced between 1993 and 2014 that apply in the UK implemented EU obligations.The biggest way in which it is said the 62% is inflated is because it includes within it what are known as non-legislative EU regulations, which concern matters so small or routine that many people wouldn't really recognise them as law.
The reality is that after 31st December this year we no longer have to automatically accept any Directives or new rules from the Commission.
I await the outcome of the second phase of the public inquiry into the Grenfell Tower fire, as investigators search for an “honest and complete account” of the circumstances and causes of the disaster. The cladding was fitted to implement an EU directive.

I've noticed that 'Independence Daily' often quotes this site. And John Redwood gives the link on his blog - though neither of these are widely read. I share the link when I can.
It's a pity, as you say, that the MSM doesn't use this information - but then they have their own axes to grind.

Is Boris being firm and determined?
Boris Johnson has warned he will walk away from the trade talks with Brussels in June if it is believed there is not enough progress to carry on with the negotiations.
The Prime Minister has dramatically increased the stakes in the upcoming trade discussions with the EU, signalling that he will bring forward the deadline for the talks by six months unless there is a “broad outline” of a deal.
The threat to call an end to the talks unless sufficient progress is made over the next three to four months is spelled out in the UK’s negotiating mandate, published on Thursday morning by the Government.

Europe under siege from within - worth a read on the Politico site:

The EU are puppet masters. Thank God we are no longer puppets controlled by people who are not qualified to make judgement nor speak for many millions of European people's.

Why not have the forthcoming talks in London instead of Brussels?

Flybe / level playing field: No doubt the unfortunate loss of Flybe is far more complex than such as I can comment on & troubles are longstanding ones so the sorry outcome was not unexpected, nor might the Government's proposed intervention have been of good value but the fact remains that in the end the company did not meet the required criteria & the government's monetary proposal went against EU/Brussels rules & our government was not permitted to give aid nor to allow a reduction in the Air Passenger Duty which the airline claimed was affecting its situation. Very sorry for those having lost their jobs.