Electric shock: Germany powers itself on 8 TIMES more coal than the UK

We Brits want to keep the home fires burning, thank you Boris 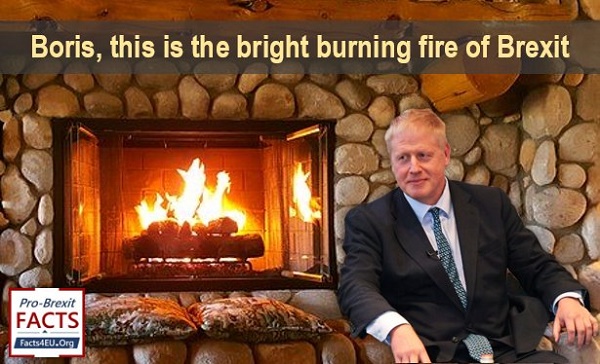 This week the Government announced that coal for home fires will no longer be available just two months after the UK leaves the EU. It is also banning or proposing to ban the burning of certain types of wood logs in homes.

Brexit Facts4EU.Org took a look at coal usage and production in the EU, in the UK, and in particular at Germany.

As ever, we have used reputable sources – in so far as these still exist when it comes to any topic remotely connected to “climate change”. Our main source was the data available from the International Energy Agency, of which the UK is a founder member, although we also studied many other reports.

Coal as a primary source of energy

NOTE: We have used the standard TPES (Total Primary Energy Supply) and KTOE (Kilo-Tons of Oil-Equivalent energy) as the recognised international measures, to provide readers with the comparisons below. 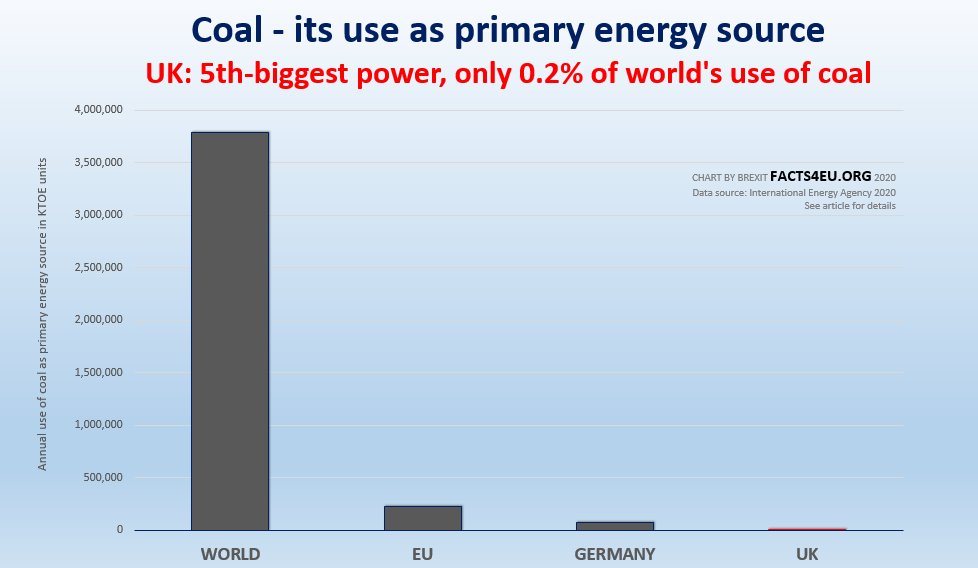 The above is about coal as a primary power source.
The use of coal and wood by UK households is so small
it would not show up on any chart we could produce

In 2011, Angela Merkel’s Government made one of its knee-jerk reactions to a world event. That event was the nuclear accident in Japan, at Fukushima. Germany declared it would build 26 new coal-powered power stations and would move to the closure of all nuclear power production in Germany. The German Government’s current aim is to phase out electricity generation from nuclear power by the end of 2022.

Coal was already the largest source of electricity in Germany and this has continued. In 2018 coal fuelled 40% of the country’s massive generation of electricity.

With the EU moving to carbon-neutral policies and the Paris accord of 2016 (which Mrs May signed up to), Germany’s energy policies were becoming increasingly untenable. Last year the Frau Merkel’s Government announced a plan to close all 84 coal plants in the country by 2038.

One consequence of the chaotic nature of Germany’s energy policies in recent years has been its need to increase its reliance on Russian gas.

This is a large and complex subject – one which is deeply worrying to the US administration and most commentators who have any knowledge of history and the Cold War – but it is not something we can go into here.

Unreported by the “climate-emergency-extinction-rebellion” BBC, the International Energy Agency published a special report on Germany on Wednesday last week.

As ever this report clearly had to be ‘whitewashed’ with some nice comments from the IEA, as it is part-funded with German federal funds, but some of its conclusions are stark.

“Despite progress on lowering overall emissions, Germany is struggling to meet its near-term emissions reduction targets, in large part because of uneven progress across sectors. It faces notable challenges in transport and heating. Now, the government must refocus its efforts to achieve stronger emissions reductions in lagging sectors.”

“Planned nuclear and coal phase-outs are set to increase the country’s reliance on natural gas, making it increasingly important to continue efforts to diversify gas supply options, including through liquefied natural gas imports.”

The whole arena of climate change is one which attracts extreme views – most particularly from those on the mainstream side. We have tended to stay away from this debate for this reason, and because for many years it had little connection with Brexit.

Now we have a new German EU Commission President, Ursula von der Leyen, with a top priority for the EU which has not even been agreed with voters of the 27 EU countries: “the European Green Deal”. She announced this in July last year, before her new EU Commission had even been appointed, and with no popular mandate from any of the 514 million people who were in the EU at that time.

But hey ho. Who needs democracy – or to be held accountable with facts – when you’re the EU?

If you liked this short report, please help us to produce more. We rely 100% on small public donations, despite being read by MPs, MEPs, Ambassadors, journalists and the public. Quick and secure donation methods are below. Thank you.

[ Sources: IEA data | IEA special report on Germany 19 Feb 2020 ] Politicians and journalists can contact us for details, as ever.

Germany will have great difficulty in going carbon neutral, as will the majority of the EU 27. The United Kingdom is miles ahead of the EU and most of the World in reaching its 2050 Political aspiration of being Carbon Neutral.
This proposed banning of the 'Home Fire' is political virtue signalling, the reduction of CO2 will be infinitesimal.
When it comes to getting the balance of carbon dioxide in the atmosphere right, the non technical politician is floundering. Pontificating politicians compete with each other to bring forward the theoretical day when carbon dioxide (CO2) is eliminated from our cars, trucks, ships and airliners, but experts say this is not going to happen any time soon and traditional engines will retain dominance for years to come.
Heavier rainfalls are a natural event of a warmer atmosphere and flooding must be prevented with the necessary defences. Its too late in the day to expect CO2 reduction, if that is the cause, to change the weather.
John Redwood today comments on Government 'top down' change to peoples lives without their approval.

Sydney: No 1: So right to raise the question contained here: It's too late in the day to expect CO2 reduction, if that is the cause, to change the weather.' It is a big 'If'.
Eminent climate scientists have been saying, but not heeded by the Green Lobbyists and governments the world over, that CO2 is a minute percentage of all gases up there. And the amount humans add to this minute quantity is so, so small as to be laughable as a reason for any weather changes. (See climate scientist, Tony Hellier on realclimatescience.com ) He looks at the facts. That is what we should be given every time. Research and facts.
Think this is the moment, Facts4EU, for a lowdown on climate. We've been fooled yet again for too long. You just know if the BBC blow the trumpet on Cutting your Carbon, it's not going to be an unbiased, independent, approach to the subject.

Good question Adam - comment 2 - as usual our brain dead elite imposing ill-thought-out laws in typically IGNORANT, ill-informed, knee-jerk fashion and making the lives of millions of people and industries miserable by setting impossible targets and diktats. Deep State, top down lunacy. The suggested 'cure' is more pernicious than the problem.

Hauwei is another calamity. Apparently Australia is rolling 5G out using Nokia and Ericsson gear!!!!! So what's the love for Hauwei by our establishment?

EV's will be a bigger problem for the manufacturer than the Boeing 737 max. Cars will be rolling of the assembly lines into storage. Who will commit to buy when a universal recharging network does not exist. A car with a dead battery leaves you stranded.
With a ban on natural gas coming, the Country dweller with their AGA will be left in the cold.

One of the biggest green lunacies in recent times was the conversion of Drax power station from coal to 'bio mass', which is more commonly known as wood to ordinary folk. How on earth can chopping down trees in the States and transporting it to Britain to be burnt be green? They say it's 'sustainable', but I'm sure that an entire tree that took years to grow, would be consumed in minutes by the giant woodburning stoves at Drax! It's just utter madness!!
To the Facts4EU team. While I agree that we need to stop polluting our planet and generally clean up our act globally, I think there is an opportunity in the UK for a well researched climate site that debunks the climate nonsense espoused by the climate emergency crowd and which has become a religion for many in search of a cause. Call it Facts4Climate if you like and join the few lonely voices like Tony Heller's amidst the hysteria! I had a heated argument with a lefty friend recently about climate, and he just wouldn't accept that Britain is one of the cleanest major economies on the planet, if not the cleanest! The problem is that people are believing the propaganda put out by the MSM, the BBC, Guardian etc etc

This will be the last nail in the tories coffin.
Many millions lent their vote to the tories because of Brexit.
Many millions burn wood and coal with NO financially viable alternative.
Boris, do you honestly think COLD poor Brits will vote for you again if you pursue this ridiculous idea?
They wont.
To Nigel Farage
This country is ripe for a party that lives and breaths common sense.
You Nigel could save this country.

It seems we have carbon mania and a real detachment from reality, just a host of face saving, virtue signalling and intense & powerful lobbying of government by the environmentalists without deeper & long term thinking & consideration of citizens & the multitude of differing communities throughout the GB & I. Long term... yes I know, we are told we don't have that many years to act but with mixed & conflicting information & reports constantly thrust at the general public and confusing everyone, there must be, surely, sufficient talent & expertise out there for somebody to 'get a grip'! We are seeing, as one commentator recently stated, the government using a sledgehammer to crack a coal nut - I would agree and not only in this context / project, others too. The practical problems appear to be being ignored in many areas of current and knee jerk policy. There will be massive collateral damage in all of this. Some we are already seeing, including the economic health of our country, present & future.