Why are we still gambling with the EU on Brexit?

Dicey games for Boris in the Last Chance Brexit Saloon 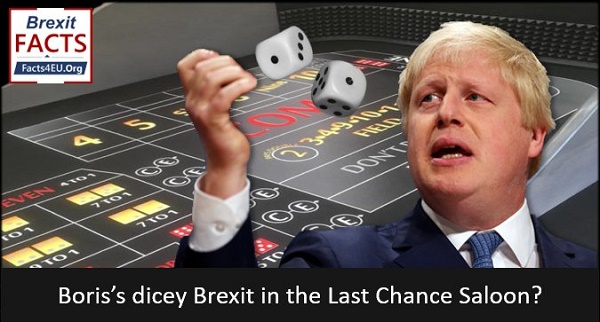 Readers will be aware from news reports yesterday that the vaunted telephone call between the Prime Minister and the President of the EU Commission, Ursula von der Leyen, failed to change a thing. The two sides are still a long way apart, despite having had four-and-a-half years to sort out the arrangements for the UK’s departure from the European Union.

Has Brexit really come down to the 2.8% chance of throwing a double-six?

“This is the final throw of the dice. There is a fair deal to be done that works for both sides but
this will only happen if the EU is willing to respect the fundamental principles of sovereignty and control.”

Most of the media picked up on the soundbite of “the final throw of the dice” without questioning that this phrase suggests the last move in a 'dicey' game of chance. We believe that a great many voters would have hoped that the terms of the UK’s final exit from the EU would have involved rather more deliberation and certainty.

This is still about ‘fundamental principles’, not the details of cod quotas

The second question for the Prime Minister is this:

If the EU is still failing “to respect the fundamental principles of sovereignty and control,”
then how is it remotely possible that “There is a fair deal to be done”?

If the EU hasn’t understood the basic premise of Brexit in four-and-a-half years, what chance is there of it suddenly seeing the light in the final hours left before the EU Summit on Thursday? For “a fair deal to be done”, the EU would have to make a complete volte-face and then alter almost every aspect and detail of its unreasonable demands. This would have to happen on everything from cod quotas to complex ‘rules of origin’ percentages to the complete removal of the ECJ from any arbitration role in UK life. And a hundred other major issues on top.

So what is going to happen tomorrow?

Tomorrow (Monday) evening, the Prime Minister is due to speak to the EU Commission President again, to review the state of play after the two sets of negotiators have spent a further two days talking. Quite what the point was of sending poor Lord Frost back to Brussels when the EU’s negotiating mandate hasn’t changed – and indeed has hardened thanks to the French and a few other countries – is beyond our understanding.

In essence there are two broad schools of thought amongst the community of major Brexit organisations. One school believes that the Prime Minister and his team will not compromise on sovereignty and that they have played a waiting game to force the EU into declaring an untenable position from which the UK can then walk away. This school argues that Mr Johnson must be seen to have ‘gone the extra mile’.

The second school of thought amongst Brexit organisations comes from a lack of trust in the Prime Minister. They believe that the moves for some time have been ‘choreographed’ and that a fudged deal will miraculously be announced this week, with a resounding “I said we’d get Brexit done and we have! We stood firm and against all the odds we’ve won a marvellous victory for the country!”

Where will Brexit Facts4EU.Org stand?

We will continue to maintain our independent stance and will review the outcomes next week in a dispassionate and factual manner. Our first question will always be:

Please do let us know your thoughts, using our comment facility below.

We hope to have your continued support and readership, during the critical days which follow. In the meantime, please help to keep our essential work going by making a donation today. As a result of Covid the level of donations we have been receiving is well below that which we need to survive. Quick, secure and confidential donation links are below, and you will receive a warm and friendly ‘thank you’ email from a member of our team.

"...IF the EU is willing to respect the fundamental principles of sovereignty and control"
Now there is a clue right there. If 4 and a half years of dealing with the EU didn't teach them anything, the last weeks are unlikely to enlighten them.

As we all know the Eu will not recognise our sovereignty.
A true free trade agreement is not achievable as the Eu ultimately want continued control over the Uk.
This leaves all eyes on Boris johnson and Uk government.
There is nowhere to hide.

The legacy media are so compromised towards socialism to be a big joke. Journalism is almost dead more a mouthpiece for socialist crap and zero news. Certainly anti Brexit, anti-british, anti-Christian.

Where will the tariffs from the 90 billion surplus with the European union end up ?

You have summed it up completely, Lord Frost is making a pointless journey.l There was never any indication VDL would withdraw the three contentious demands. She is well aware our PM has no wriggle room and cannot accept them, as they negate the whole purpose of our leaving the EU. Its clear for the World to see.
The EU Commission President said a few cays ago  'No one questions the UK's sovereignty in its own waters ", but then the EU directs Barnirer to take it away with new demands.
At this late stage a satisfactory trade agreement to both parties is unobtainable. Supposedly 80% of the work has been done, which would allow the EU to rush through mini-deals.

The final roll of the dice as far as I can see is a waste of time, unless the EU stop the insistence that we drop the red lines there will be no deal. Boris so far has played the game but I personally think he's banging his head against a brick wall especially at the eleventh hour Barnier chucked in the googly ball of more demands. the EU mindset seems to be more influenced by Macronpoleon than any other EU member, but of course we all know how hard done by the French are yet they get the most out of the EU budget. This is the end game, I see that to get that deal over the line then the EU will have to heavily compromise on their red lines, but in my view they won't because they are the collective and we are just one country leaving that collective, they just want our capitulation.

The only way any of this nonsense will move forward is if Johnson walks away, tears up the WA and lets US get on with the business of making the country work. Politicians don't make the country work - that much has been revealed in the last 4 years. End this torturous BS. We're all sick of it and sick of the beaucrats that perpetuate this madness.

The EU has no genuine desire to separate on equal terms they insist on punishment and maintaining unrealistic controls over our new Sovereign state. They just don't get it.

For clues, I look at the public words & consequent actions.
Who remembers the 'turd' of a WA agreement, a resigning matter? So far, so good.
'Dead in a ditch'? All he had to do was nothing, and we would have been free & independent on 31st January. What we got was Boris signing the trap-laden, & GFA breaking, WA (with a couple of words changed & abandoning N.Ireland), forcing it through the House & taking us into colony status with the EU.
Who remembers the June 'deadline'? This was the point where, unless a 'deal' was basically done, bar dotting the 'i's & crossing the 't's, we would definitely be leaving on WTO & focus on readying the country. Sounds sensible. Did that happen? At the re-instatement of 'negotiations' & yet another 'deadline', it was, and has been since, that a 'deal' is nowhere near 'done' given the fundamental chasms on key issues. So it has continued, 'deadline' after 'deadline', with no certainty for UK business nor the people that they supposedly work for. There are now 26 days remaining.
What is obvious to everyone is that the talks failed. Yet, after another 'phone call', instead of acknowledging reality the negotiators are to continue today, & progress will be discussed again by Boris & VdL tomorrow. After 4 yrs 8 months, are we suddenly to expect it to be 'wrapped up' in 24 hrs, given the differences?
This is all to do with saving face & 'kall consideration of the people of the UK & EU. If Boris had meant his words we would all have known with certainty it was WTO on 1st Jan on 1st July.
Of course, whilst all the focus is on the faux 'negotiations', in the background time is ticking away to repudiate the appalling WA, the bones of the EU re-instating its control over the UK. Look here, not there.

The withdrawal agreement is proof that the EU is no friend of ours, but an aggressive neighbour, bent on taking over our territory, consuming our resources and putting us at a disadvantage in as many areas as they can. This is corroborated by what we know about the 'deal' under discussion, in particular with regard to fishing.
PS Shame on those hundreds of MPs during Mrs May's government who voted for the first version of the withdrawal agreement, and all those people who have worked tirelessly to put the EU in a favourable light, despite the facts, and seek to weaken our position as a sovereign nation.