If the EU survives this, it’s going to be much smaller

Revealed : The ticking time-bomb of an economically (and morally) bankrupt EU 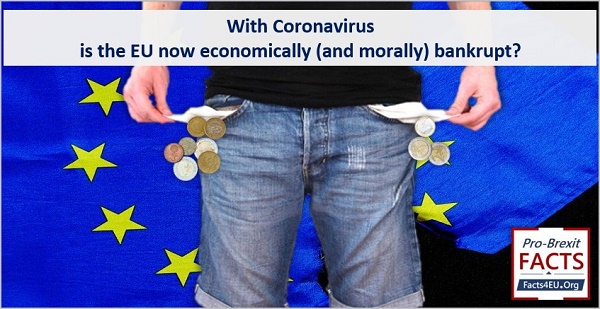 The EU as an institution gets its money from its 27 Member States plus the United Kingdom. With national economies collapsing all over Europe, the EU’s income looks like being slashed just when it was asking for a pay rise.

In light of reports now showing EU economies contracting by as much as 30% in April, Brexit Facts4EU.Org asks the obvious and awkward question.

If the EU were a company, would it now be unfit to continue to trade?

The moment the directors of a company believe that their business will be unable to meet its liabilities, they have an obligation to cease trading. Readers will be familiar with the term "a going concern". In essence a business must have a reasonable prospect of continuing to trade.

The EU as an institution makes payment commitments on a daily basis, spending the cash of hard-working taxpayers from all across its Member States… plus the UK (see below).

The EU plans its grandiose projects in advance, redistributing wealth from countries such as the UK to other EU countries - and to countries which are not yet even members of the EU, such as Albania. When the EU commits funding, it does so on the basis of what it expects to receive from Member States, plus the UK. But what happens when something like the Coronavirus comes along?

What happens when large parts of the economies of the EU’s Member States go into ‘lockdown’
and cease to produce wealth?
Where is the money going to come from, to pay for the EU’s ever more profligate projects?

A quick reminder of how the EU is funded

As ever, we have used the latest information from the EU Commission itself.

Very basic breakdown of EU funding from British taxpayers,
and from those of some of the EU Member Countries

The UK continues to fund this, as if it were an EU Member, but with no voting or veto rights 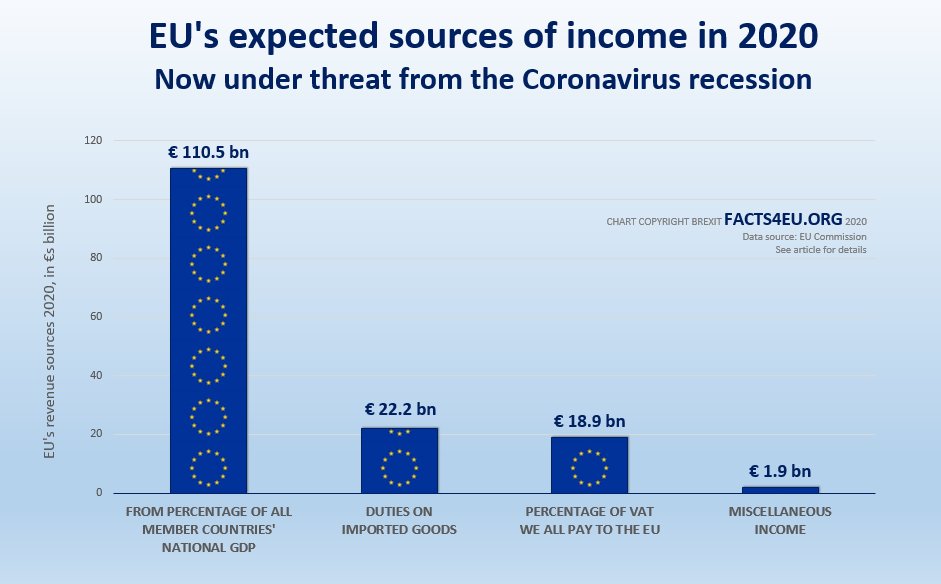 What happens to the EU if the economies of Member States contract by 10-30%?

In one word, the answer is “Oops”. With national economies tanking, the following will happen to the EU:-

Before the Coronavirus crisis started, the EU was already in a crisis of its own, unable to agree on the new EU budget. In February the EU Council met (without the UK of course) and failed to come close to any agreement on the EU’s budget for the next seven years from 2021-2027.

Even before the Coronavirus effects were being felt, the “Frugals” (the generally northern EU countries from what used to be known as ‘the West’) were pushing back on the EU Commission’s latest budget proposals. In the end it is the governments of the EU Member States which decide these things, no matter what the EU may try to say about the involvement of the EU Parliament.

That all happened before the worst effects of the Coronavirus measures were being felt. In the new climate it would seem that the EU Commission will have to rewrite its budget proposals completely.

Although the United Kingdom is technically no longer a member of the EU, the UK is still paying in as if it were. On top of this, the UK is also still one of the minority of countries paying in much more than it gets back.

On December 31 2020 this is set to change… unless full Brexit is delayed because of the Coronavirus.

The EU Commissars denied financial reality when we voted for Brexit

In 2016 when the British people voted to leave the EU, the fanatical ideologues of the EU Commission and the EU Parliament were in denial.

For years they thought they could thwart the decision of the British people, just as they had done on numerous previous occasions with the French, the Danish, the Dutch, the Irish, and others after they had rejected the EU’s plans in one form or another.

With Mrs May and her Europhile Cabinet, including Chancellor Philip Hammond and his arch-Europhile Treasury, and the arch-Europhile metrocentric media and every other part of the soi-disant “elites”, the EU almost got away with it.

During this period the EU Commission made NO attempt to reduce its outgoings after the British people’s vote to leave the EU – they remained in complete denial.

Whatever the rights and wrongs turn out to be, the handling of the Coronavirus in the UK and in all other major countries will have a dramatic impact on the EU’s revenues. Are they working on this? Are they trying to cut back on their expenditures?

If they are, we have not seen sight nor sound of it. The EU looks set to be a whole lot smaller following this meltdown, whether the EU realise it yet or not.

We will certainly shed no tears.

If you value unique and original research from a team trusted by politicians, by other Brexit organisations, and even by some of the mainstream media, please help us to keep going with a donation. Unlike many Brexit organisations we do not have any corporate donors. Thank you, and a member of our team will email you personally if you can donate something today.

[ Sources: EU Commission Budget Directorate ] Politicians and journalists can contact us for details, as ever.

It's for articles like this that I read your site. Very interesting thank you.

Of greatest concern is the UK's liabilities if the EU goes bust. See the Global Britain report by Bob Lydon. (link on June 27th 2019 article on Brexit Central): ''Why the Eurozone's fate makes an immediate Brexit vital':
Extract:
'...During the transition period the EU could cause the UK’s maximum contingent liability to rise from the current figure of €207 billion to €441 billion, or by even more if our exit is drawn out into the period of the next EU Multiannual Financial Framework. Any payment the UK might make for our supposed residual liabilities will be spent immediately on other things: who will then meet those liabilities when they fall due for payment?
This all derives from near-criminal irresponsibility by the UK’s negotiators.
For the UK the timing and terms of our withdrawal are vital: can we crystallise and then discharge our liabilities by leaving the EU completely and soon, or do we risk becoming a loss-sharing party as and when the Eurozone financial system goes off its cliff?
This will occur at the latest in 2021 ... The only sensible option is to withdraw now, unilaterally and without a Withdrawal Agreement, '

Super article, thank you. "The EU doesn't make anything." No. One could well argue, that membership of the EU depresses production and invention - as indeed other articles by you suggest (GDP comparisons).

Picked this up this morning:
EU INSTITUTIONS. Dutch Prime Minister Mark Rutte and German Chancellor Angela Merkel have excluded European Parliament President David Sassoli from talks on the EU response to the coronavirus crisis, El Pais reported.
“The main community leaders held a second videoconference on the coronavirus crisis on Monday (6 April) with the notable absence of the President of the European Parliament, David Sassoli,” the Spanish daily reported.
“The leader of the only institution chosen by universal suffrage has been deliberately excluded once again from the forum in charge of preparing the roadmap for a comprehensive recovery plan […] Germany and the Netherlands lead the exclusion of Sassoli,” the newspaper added.
This confirms who are the EU leaders making the decisions, Parliament is excluded. The row developing is about 'coronabonds'.
Spanish media reported last week that Merkel blocked the Italian’s participation amid fears that he would push for coronabonds, an option that Berlin fiercely opposes.
“The European Parliament represents the will of the citizens and therefore deserves maximum respect. Its President must not only be heard but also participate in decision-making. We are not going to allow any Prime Minister or Chancellor to silence our voice,”

Hopefully it is part of the holy trinity that will destroy the EU.
Apart from the reduced future 'income' from the remaining 27, there is the no small matter of the loss of the UK'S net 'contribution' and the long expected financial firestorm that is going to hit the Ezone. A perfect storm. It is no secret that the EU was effectively bankrupt if the UK doesn't pay the £39bn (+) - the EU is to decide the final figure.
The impending collapse of the Ezone & ECB can now 'safely' be blamed on the virus and not the mismanagement & corruption. Phew!
The question is what actions are our Govt taking to limit our exposure & liabilities to the ECB over which we have no say? It seems none. That is criminal behaviour & begs the question who are they REALLY working for, because it doesn't appear to be the UK.

I share your concerns Not4EU. Not just for Britain but for any country that has dealings with the EU.
We are in a very dangerous period. The globalists have the upper hand and they seem willing to stop at nothing to achieve their utopian wet dream and our nightmare.

Firstly I wish Boris Johnson a speedy recovery this Government may not last the summer as I don't see anyone in this Government with the energy Boris has maybe Gove not Raab Charisma free, I don't see People putting up with this lockdown for long this isn't China