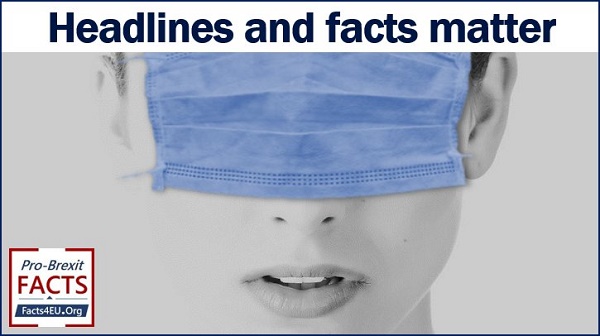 All deaths are tragic on a personal level, but here we present cold, hard numbers.

Coronavirus is a real and terrible thing. Not only is the disease killing people, but the government's attempts to prevent the spread of the virus is killing people too. The reactions to the virus have transformed our world in ways beyond anything which has gone before in peacetime.

It is therefore essential to look calmly at facts and have a sense of proportion when seeking a way out of the current situation. This article provides some more facts to assist.

On Tuesday the ONS published its weekly data on deaths in England and Wales. Our analysis shows that the total number of deaths so far this year is still LESS THAN IN THE MILD ’FLU EPIDEMIC of 2015, when the figures are adjusted for population growth.

HOWEVER Tuesday’s headline from the BBC was “Coronavirus: Deaths at 20-year high but peak may be over”. This is only true if you are a journalism operation which parrots what it is sent in the form of press releases. 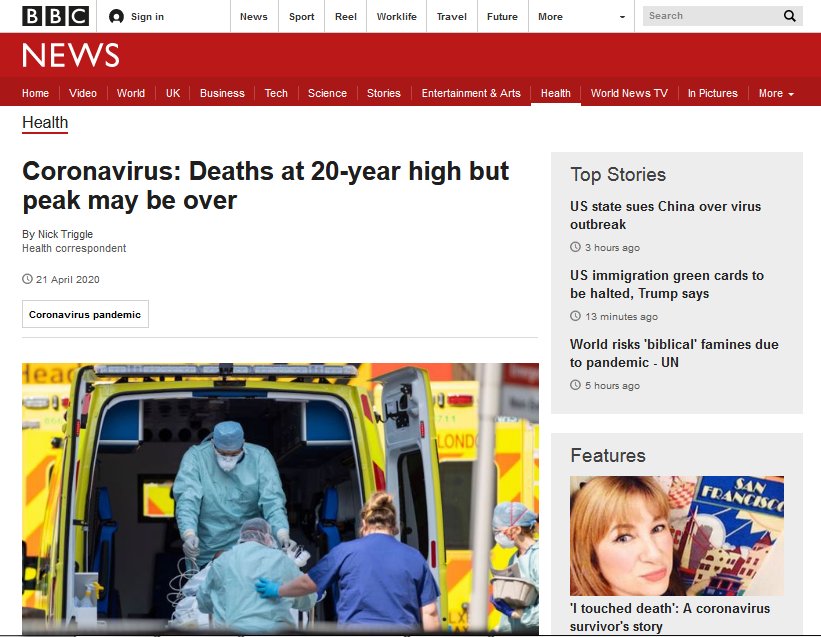 It is essential to point out that the majority of people in the country do not read every article published on every subject. Many people form impressions based on headlines they see in the papers or hear on the TV and radio news.

In fact the BBC article linked to above is better than many it has produced in recent years, but it nevertheless states that :-

“The figures show that the overall number of deaths topped 18,500. That is the highest since January 2000 when there was a bad flu outbreak. It is also much higher than the recent bad flu season of 2015.”

If you are a journalist who can’t be bothered to think for yourself and do some research, then this is broadly true in absolute, factual terms. What it doesn’t do is present the reality for the public. Once again we have tried to give some sense of context and proportionality in our chart below.

There are bald Coronavirus facts… and there are meaningful facts

The simple fact is that total 2020 deaths from all causes are still less than total 2015 deaths to the same date, when adjusted for the large population growth this century. 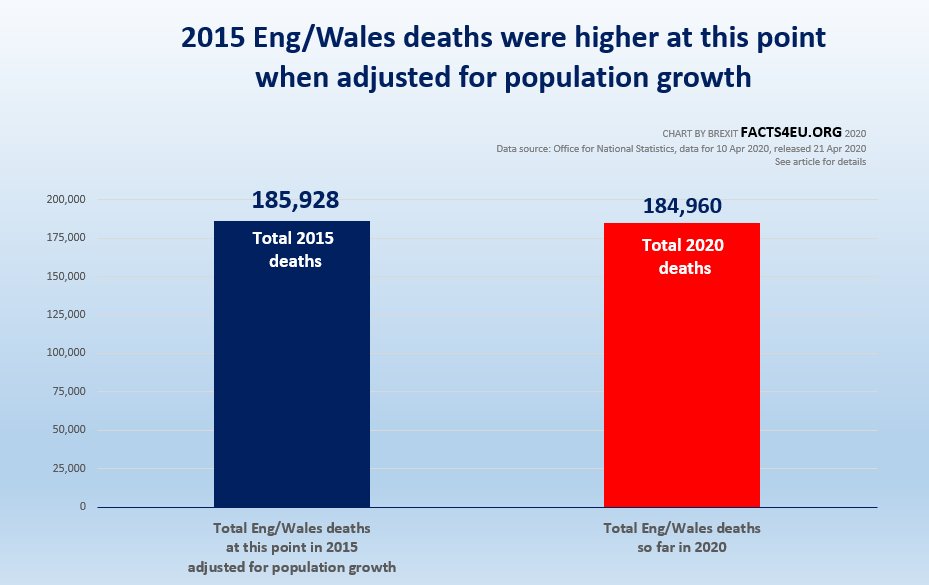 In the chart above we’ve shown in red the actual number of deaths to 10 Apr 2020 (latest figures), according to the ONS’s latest data for England and Wales released Tuesday.

To the left of this in navy blue we’ve shown the adjusted number of deaths to the same date in 2015 – the last time there was a mild ’flu epidemic. We took the official figure for 2015 to the same date as the 2020 figure, and then adjusted it upwards to account for the population growth since then.

In other words we’re comparing the deaths in the population in 2015 and 2020 on an “apples-for-apples” basis.

The biggest killer this year will not be Coronavirus

Many, many more times as many people will die from the biggest killers in the UK than from the Coronavirus. Brexit Facts4EU.Org looked at all the principal causes of death in the last year for which detailed official figures are available.

Boring statistical note: The actual number of deaths to the latest official data date (10 Apr) in 2015 was 179,612. Between 2015 and 2020 the population has continued to grow. The latest population figures from the ONS run to 2018. We took the average growth rate over the last 10 years to produce population figures for 2019 and 2020. This uplifts the 2015 death numbers to a figure which gives a much more accurate comparison with figures from previous years.

Given that the United Kingdom population has continued to grow each year, and given that mass immigration has been a hot topic since before the EU Referendum which took place almost four years ago now, readers might expect the BBC, Sky, ITN and others to take this into account when presenting information on the most devastating event in most of our lifetimes.

They didn't. Hence them reporting that the number of deaths was the largest since the year 2000. It wasn't, after adjusting for population growth. To compare deaths to 20 years ago, before millions entered our country from the EU and other countries, does not seem to us to present a realistic picture for anyone.

We believe that it is essential to view an all-devouring crisis like Coronavirus in context at all times. Only then can politicians make the right judgement calls in the knowledge that the public are likely to be behind them.

As ever we must stress that we are just as caring as anyone reading this and that of course every death is a personal tragedy. However this does not mean that we should give up our critical faculties when assessing the information we are being given.

The Brexit Facts4EU.Org team will of course continue to focus on our primary role of ensuring a full and clean Brexit by 31 December 2020, Nevertheless we felt that readers should have some facts which more properly reflect the true state of play right now in terms of the Coronavirus. If the BBC will not do some basic work then we have to.

Oh, and the graphs which continue to be presented at the No.10 press conferences which are televised each day are almost too embarrassing for words. Do the "Scientific" officers advising the government who present these things seriously think that the majority of the public have a clue what they mean? Members of our team struggle to understand them, and we do data analysis all week.

We continue to believe that the situation on deaths will get worse before it gets better. We just want to ensure that the country’s response to the Coronavirus is based on some sense of proportionality overall.

For readers in Scotland and Northern Ireland: We apologise for presenting figures on England & Wales only, but there is no centralised data-point for the entire UK. The Office for National Statistics is working with the devolved administrations on this but it's not there yet. Sadly we simply do not have the resources to delve seperately into the admin systems of the Scottish and Northern Irish statistics agencies to extract information which we know will take many hours to find.

And on that note, if you believe in free speech and a free and independent United Kingdom, please, please make a donation to us today. We have no foreign billionaire backers like Rejoiner organisations do - only you, our readers. Quick and secure donation links are below, and you will receive a friendly 'thank you' email from one of our team.

[ Sources: Office for National Statistics | BBC ] Politicians and journalists can contact us for details, as ever.

Dear team,
What excellent work from you as always. I get no feeling from the BBC of the relative numbers of deaths and you've done this very, very well. We need your logical brains!
I worry deeply about the way this has taken over our lives even though I'm apparently in a very high risk group!! Some of us have been through several epidemics over the years and it's so hard for me to see why this one is so different that it puts me under house arrest.
Keep up the good work.
Best wishes,
Maggie

All humans are genetically coded to care about others. It's outrageous that the government tries to pretend that they need to instruct and coordinate our compassion. The strangest thing is that we're now supposed to limit compassion to people with coronavirus and ignore all others. We are not supposed to care anymore about people with other serious medical conditions. Who cares if they're dying quietly because of not being able to get treatment?
I can hardly take any lecturing from authorities with these kinds of morals and double standards.

In one week alone in 2015, 15000 people died. In one week. I seem to remember then it was about the failing NHS, not the amount that died. Its a shame we don't seem to have one journo that can be bothered to do any real research.

All other causes of death seem to be ignored.

To Patrick and all English readers, (comment no.2)
Indeed, it is St George's Day. Here for our English readers is a little patriotic number:
https://www.youtube.com/wat...
Kind regards, the Brexit Facts4EU.Org Team

Very concerning. If lies are being told in health matters now, we really have reached the bottom.

Brendan O'Neill has an article in the Spectator of relevance - The 'Protect the NHS' message has become dangerously effective. He suggests that in concentrating on Covid 19 other illnesses are being neglected.
If the NHS is to concentrate on one objective, it is to carry out mass testing of the people who cannot stay at home and isolate the virus carriers.
Eventually the NHS will have to face Coronavirus head on. Will they put the un-staffed Nightingale ICU's into operation.

Where's the full cost- benefit analysis by our so called lauded experts??
They have identified the one benefit (important as it is) but have not considered all of the costs e.g. preventable deaths occurring, physical and mental health problems, long-term economic damage and all of the misery and strife that goes with it.

I assume you send this (and other) analysis to the BBC (and others) and ask for comments. What do they say?