Remoaner Phil signs the motion – and signs his departure from Parliament? 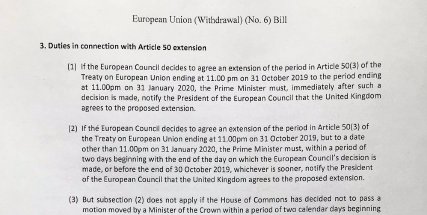 See below for full-size clickable version of the Bill / Philip Hammond at Davos, Switzerland

We analyse yet another motion by Remain MPs to stop Brexit

Yesterday a Bill was lodged with the Speaker’s office by Remainer MPs, which effectively hands control of the UK’s Brexit policy to the EU Council. If passed, 27 leaders of foreign countries will be able to decide when the UK leaves the EU.

The Bill also delays any Brexit until 31 January 2020 at the earliest. If the EU require a longer extension then the Prime Minister must agree to that.

Naturally the Bill is more complicated than our description above, but this is a summary and in practice this is what it means. It precludes a clean break Brexit on 31 October 2019.

Please click the image above to read the PDF version

Who is responsible for this?

The Bill has been proposed by Labour’s Hilary Benn and signed by 11 other MPs, including Philip Hammond who was Chancellor until 10 weeks ago. Below is the roll-call of all those whose name is on this Bill.

Our patience is exhausted, and we are sure we speak for many readers. Parliament has had over three years and two months to enact the will of the British people as expressed in the Referendum of June 2016.

And now these anti-democratic MPs want to extend the UK’s EU membership until a minimum of three years and seven months after the people voted?

No, this really won’t do. The British people have a remarkable tolerance and patience, but enough really is enough.

Almost unbelievably, Philip Hammond was re-selected by the board of his local constituency party yesterday. Today the very least we expect from the Prime Minister is to withdraw the whip from the three Conservative MPs who have signed this motion, including Mr Hammond. Mr Johnson does not even need to wait until the vote – probably tomorrow – and he should do it as one of his first tasks this morning.

With the whip withdrawn, Philip Hammond will no longer be able to stand as the Conservative candidate for Runnymede and Weybridge in any forthcoming General Election.

We can almost hear the cheers resounding across the country when that happens.

Perhaps Mr Hammond will appeal the decision to the ‘European Court of Justice’ under whose jurisdiction he clearly believes we should all fall.

We prefer the idea that he finds himself in the political wilderness as a bitter Remoaner, living out the rest of his life without the ability to inflict any more damage on the country than he already has.

[ Sources: UK Parliament ] Politicians and journalists can contact us for details, as ever.

What does an MP have to do to be sacked? Betray your country? No. Betray your party? No. Betray your constituency? No.
Make a racist comment? Yes. Pinch a bottom? Yes.
Off topic, May I point readers in the direction of an excellent article in today's Conservative Woman:
Remainers - deceit disguised as democracy, by Timothy Bradshaw.

What desperation! Apart from handing control of exit day to the EU, the purpose of the extension appears to be for "negotiations". Yet the two (unlawfully agreed) extensions are for the sole purpose of ratification of the surrender Treaty. Are they changing the interpretation of A50, which is not up to them? It was so kind of them to even proscribe the wording of the letter. Did the EU provide it for them on one of their 'secret' meetings? I note that the letter provides no reason for the extension.
Putting aside our real & serious concerns that Boris will present May's WA without the backstop as a 'deal', Boris is seeking a (as yet unspecified) deal. That has not concluded. So the presentation of this Bill clearly demonstrates that the Sponsors, & all who vote for it, are not interested in 'any' deal at all. It is merely a mechanism to kick the 'no deal' option down the road whilst they try and overturn a democratic mandate.
We truely have a rogue Parliament & Squeaker. They are wilfully destroying any faith left in our lawmaking institutions at the behest & on behalf of a foreign 'potentate'. The Sponsors & anyone who votes for it needs deselection immediately, & should face charges of sedition & high treason in the reckoning that must come if faith is to be restored.
The back door deals & corruption still appear to be rife, with the EU viper Scammond requesting a small private meeting to approve his 'reselection' rather than face his constituency members. Activities like these, & CCHQ 'over-ruling' constituency deselection/vonc, cement the feeling of continuing corruption in the parties. The only way to address this, and for Constituents to control their elected representative, is to put back the power to the constituencies. There must also be a Bill allowing people greater recourse for recalling an MP who has gone rogue or simply not up to the job. A majority of Constituencies voted to LEAVE.

I have noise-cancelling headphones. The remainstream media can turn down the sound when they desire, but amplify it to promote their remain agenda. Do they think that we haven't noticed? There were only around 150 not only at the very end of the street but across the main road. Tell me again that their impartial? They could also do with a handy card providing them with the definitions of words like 'democracy' and 'coup', because they don't seem to understand the English language.

At 6pm yesterday Boris Johnson made a statement that wrong footed everyone, leaving the BBC team floundering.
The Bill calls for the Prime Minister to "obtain from the European Council an extension of the period under Article 50(3) of the Treaty of the European Union ending at 11pm on 31 October 2019 by sending to the President of the European Council a letter...requesting an extension of that period to 11pm on 31 January 2020".
The stated purpose of the proposed third extension: -
An Act to make further provision in connection with the period for negotiations for withdrawing from the European Union.
But, we have had two years and two extensions with NO sign Parliament will ever ratify the Withdrawal Agreement and Political Declaration.
The sincerity and purpose of the MP's proposing the bill must be questionable. Many of the MP's have no intention of voting the WA through. Their wish is to remain in the EU and this is an attempt to further delay our leaving.
The BBC's Europe Correspondent Katy Adler says Brussels sees no reason for amending the WA as they do not believe the UK Parliament will ever ratify it.
What point is there to this bill when the extension has no purpose. It is legally challengeable.

One of the further 'complications' highlighted by another site's twitter account:
-
'Brexit blocking MPs want us to believe that the extension they seek is only until 31 January.
So why does the Bill have dates for reports and motions on a rolling basis from early Jan, into Feb and every 28 days from then on?
A timetable for revocation, by the backdoor.'

I think what we are seeing lately has all been carefully choreographed by Cummings.
What Boris had to do was firstly get the leave voting public (from left and right) 100% behind him, and secondly make the arch Remainers play their hand. They duly obliged and walked straight into the trap. So we now have the definitive list of those Tory MPs who will vote against their own Government, and will be deselected.
There will be an election within the next few weeks, there is no doubt about that, but Boris is laying the ground to ensure a huge victory.
There is a very interesting caller on Farage's LBC show who gets it spot-on:
https://www.lbc.co.uk/radio...

Here is the list of traitors. To date, 14 have said in advance that they will vote against the Government.
https://www.buzzfeed.com/al...
- Too, I agree with Chris that Theresa May should also be on this list - and deselected.
An election, whenever it comes, should be an opportunity to get rid of these people - in my constituency, Anne Milton.
Joe Domican is the Brexit Party candidate for Guildford, and he shall get my vote.

Sorry for all the links today, but a positive aspect worth following which might get lost in the 'noise':
Deutsche Bank’s chief economist, David Folkerts-Landau, not only says that over the medium and long-term a ‘No Deal’ Brexit will make no difference to the British economy, he says an inadequate deal which constrained the British economy would be “a second best solution”. Confirming what many in Downing Street believe, namely that even without the back-stop, May’s regulatory-aligned deal would have detrimentally constrained the dynamic British economy. So-called “regulatory alignment” is an EU imposed constraint on unleashing the British economy to outcompete turgid EU rivals. As the leaked French memo on Friday revealed, Paris fears a resurgent, deregulated dynamic British economy…
https://order-order.com/201...

And presumably, Boris could deselect Bercow?
Parliamentary convention says not, but since Bercow has been tearing up the rulebook, two can play at that game!