Corbyn's extension: How will the EU spend some of the UK’s extra £3 billion?

The Act passed yesterday by anti-democratic peers and MPs seeking to block Brexit, assuming it gets Royal Assent, will cost British taxpayers another £3 billion. This could easily double if the EU insist on six-month extension, rather than the three months envisaged.

Today we show how the EU spends outside its borders, on countries it hopes will become part of the European Union.

The overall spend outside the EU is huge, running to hundreds of billions, but here we look at just one country, Ukraine, and just a few day-to-day examples.

Why did we pick Ukraine?

Ukraine is particularly relevant as an example because two years ago (June 2017) the EU granted 45 million Ukrainians visa-free access. In less than two years, the Ukrainian Mission to the EU reported that more than two million Ukrainians had entered the EU. Whilst Ukrainians are supposed to leave after 3 months, there seems to be little control over this.

Four years ago, the EU agreed a support package for Ukraine of €11.2 billion (approx 10 billion pounds) which continues to be spent. This comprises numerous elements from various EU bodies.

Examples of EU expenditure in Ukraine

The above are just 4 examples from thousands of ‘micro-projects’ funded by the EU over the last few years using British taxpayers’ money. In each case the EU funded 80-100% of the money. 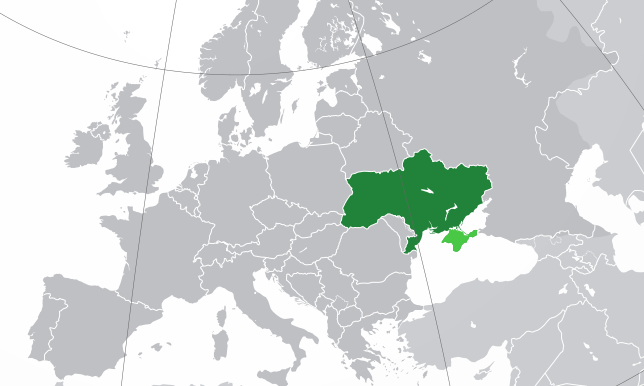 The final example we gave above is particularly interesting. The Crimea (pat of Ukraine) was invaded and annexed by Russia in March 2014, and yet the EU's project continued until Feb 2015.

It’s the Russians who are now benefiting from the £2.9 million given for that ‘project’.

Crimea is shown in light-green in the clickable map to the left.

It’s important to note that because of the different cost of living of Ukrainians, monies given to them by the EU are worth over 10 times what they would be worth in the UK. In other words, the £15,000 donation for film discussion clubs for young Ukrainians to talk about human rights would be worth approximately £150,000 to UK youth clubs.

Ukraine is just one of 16 countries benefiting from the EU’s “European Neighbourhood Policy” (ENP). The ENP is chiefly a bilateral policy between the EU and each partner country and governs the EU's relations with 16 of its eastern and southern neighbours.

The £10 billion we have quoted only relates to Ukraine. It includes “Overall development assistance” and “Macro financial assistance”.

Are Remainer MPs happy with this? Do they even know how the EU spends money in general? Is it normal and acceptable for the EU to use British taxpayers’ money to fund countries outside the EU? We’re not talking disaster relief and food parcels here.

Is it normal and acceptable for British MPs to have no say over how much is spent, where it is spent, and what it is spent on? And should it not be done with the informed consent of the British people?

The rights and wrongs of distributing wealth to other countries can be debated. Some people will agree, some will not. However this is the whole point.

A sovereign and democratic country CAN debate these issues. The UK – its Parliament and people – currently cannot.

We suggest that if the EU wishes to subsidise countries so that they can reach the standards required for the EU to enlarge its membership and have them join, then that should be a cost borne by the EU not by the British taxpayer.

Please help us to keep going if you can, with a donation. Quick and secure methods are below. Thank you.

[ Sources: EU Commission | Ukrainian diplomatic mission to the EU ] Politicians and journalists can contact us for details, as ever.

The whole EU project is madness from start to finish.

Please start by reading my comments of 15.03 yesterday.
I believe that this new Act cannot force the Prime Minister to request a further extension to Article 50(3). It is unworkable and not fit for purpose.
It is: An Act to make further provision in connection with the period for negotiations for withdrawing from the European Union.
The conditions placed upon the current and any future extensions by the EU Council prohibits re-opening the Withdrawal Agreement, the aim of the Act.
Article 50(3) is brief and concise, but it does not clarify the legal status of the Member State during the extension period. The purpose and duration of extensions has been assumed by the Council on an ad hoc basis. The extensions are retaining the UK in limbo, against the purpose of Article 50 which is to leave the Union. Article 50 ran out of time on 29th March 2019, and the moment the extensions expire the Treaties cease to apply.
The Act does not require Parliament to ratify the withdrawal agreement, the sole purpose of the Act is to prevent Article 50 being satisfied and the UK leaving without an agreement on 31st October
Does anyone want to start tweeting

The disgrace once proudly known as the House of Commons (HC), is now viewed as the 'House of collusion' against its own citizens.
The Corbyn led coup, along with Blackford, Swinson, Liz Saville-Roberts, the leader of the Independent Group for Change, are clearly in denial. They have one thing in common - they're colluding to stop Brexit, and there's no other way to say it but to call them out.
My own MP (PC) will do anything to stop Brexit.
They're trashing well established UK democratic values because we foolishly elected them into power.
Anti-UK MPs are (in my opinion) abusing their powers? They care more about the undemocratic EU, and their latest act of 'treachery' effectively means the EU wont need to do a damn thing because these idiot MPs have taken away the most valuable tool of all - 'no-deal'.
Time for Boris to get together with Nigel Farage - all Brexiteers should get tactical.
We should certainly be seeing many more UK Union flags by Parliament instead of the blue sea of a non-country?
The problem with most remain MPs is they despise the Leave outcome - a decision they asked the electorate to decide - the question was simple, and I knew what I voted for.
Take the above article for example - or most other Facts4EU articles - WHEN have we heard ANY remain MP give us these facts?
We haven't, because if they told the truth they will know their game is up.
Brexiteer MPs are doing their best and I salute them.

If Corbyn and the remoaners were to win an election can anyone tell me why we should, despite respecting it of course, accept the outcome?

Yes the extra £3bn (or £6bn) is an annoyance, an irritation, but ultimately it is no big deal compared to our GDP which is currently £2300bn.
What Boris must absolutely NOT do is break the law. That would result in a VoNC, which he would lose, and we would then have Benn as a caretaker PM, who would ask for the extension anyway. Brexit would then be effectively dead.
Boris has huge public support at the moment, and all the revelations about the Remainers coming to light today only boosts his popularity further. He must not blow it, just for the sake of a few months delay and a bruised ego.
When the election does come, he will win a huge majority and he will then be able to do whatever he likes, including radically reforming the HoL.

Chris, even if the CON Party were to win a large majority (something they haven’t done since as long ago as 1987) they won’t be reforming the House of Lords and thereby enabling us to sack Lords (many of whom are natural privileged Tories). Apart from being virulently anti-British these days, the CON Party has one other abiding principle and that is their total contempt and hatred for any real idea of constitutional reform. After all, they still can’t get their heads around the idea of giving us FAIR VOTES that COUNT WHEREVER they are cast in this undemocratic land and I would suggest that is one reason we are in this utter mess to begin with.
The Lib Dem’s tried to reform the House of Lords in that CON Party/Lib Dem coalition but CON Party MPs blocked it. The CON Party doesn’t believe in constitutional reform, it never has and never will and would much rather lose elections to Labour than even think about the subject let alone act.

Parliament must be completely bonkers, seeking to remain in the 'Penalty Box' for a further three months.
Paying in for a legally undefined temporary membership, in which the Prime Minster cannot participate in the discussions of the European Council concerning the UK.

An interesting article here:
https://moneymaven.io/misht...
It seems the Benn Bill may not be legal.
Maybe Boris is going to wait until after 19th Oct, then mount a legal challenge to the Bill.

Reported comment from Cummings today:
"Cummings’ view is that SW1 is reading the situation wrong. He told SPADs last night, ‘Pundits focus on the bubble and they think Corbyn passing a bill for another delay is a victory, the public will not agree. SW1 rarely understands how the public think about such things..."
That kind of suggests he has accepted the delay, but realises it has boosted Boris' chances in the election when it eventually occurs.