New Brexit initiative to be launched next week 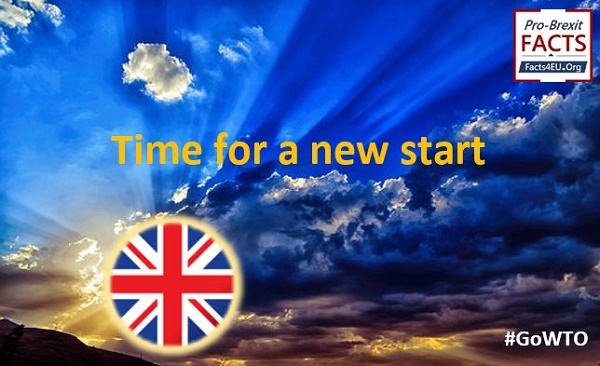 It feels as though we have never stopped fighting for Brexit since the Referendum on 23 June 2016, doesn’t it?

Sadly, it seems we must all gird our loins and intensify our efforts in the coming weeks and months. This is going to another major battle and it could be the final one.

What can we all do?

In recent days Brexit Facts4EU.Org has been reaching out to some of the other active Brexit organisations – specifically those with a significant reach in terms of the public, MPs and the media. We have also been speaking to politicians.

Our aim initially is to produce two definitive Brexit documents – each of them in our famous ‘one-pager’ style – which can be endorsed and heavily promoted by all the groups who are backing this initiative. We simply must get the fundamentals out there, and keep hammering them home.

This first phase is designed to tackle the increasing threat of a ‘May 2.0’ Surrender Treaty. Disturbing comments have been made from government sources about amending the Backstop and presenting this to Parliament next month. Whilst the Backstop is totally unacceptable, the ‘Withdrawal Agreement and Political Declaration’ is an abomination almost from start to finish. Amending the Backstop does not make this ‘deal’ Brexit in any shape or form.

Unfortunately we do not believe that enough of the public are yet aware. Even more worryingly it is obvious that many people now would simply support anything that calls itself Brexit – just to get this whole sorry saga over with.

In this fight, dear reader, we will need your help. Thousands read our work each day and we will be asking all of you to do your bit. You do not have to man trenches as our forebears did. Instead we merely ask everyone to do whatever they can to promote this initiative heavily. Some of you have mailing lists of up to 500 people. We hope to leverage the power of tens of thousands to reach millions.

When does this start?

The process is already under way and we have six important Brexit organisations who have agreed to the plan in the last 24 hours. In the next couple of days we hope to agree the wording of the first one-pagers with a view to launching next week.

As ever, the lack of funding limits the resources we can put on this. We are inviting readers to help by becoming a Sponsor (£10 donation), a Gold Sponsor (£50 donation), or a VIP Sponsor (£100 and above). We will not publish your name unless you give express permission, naturally, and your contact details are never used.

Please just use the quick and secure donation methods below this article. Thank you.

What is the rest of the plan?

If we can get support, we intend to follow up Phase One with a second phase. This will involve a direct campaign naming MPs and ranking them according to their views and how they have voted in all significant votes in Parliament in the last three years. We will also provide sample letters and contact details. This involves a lot of work updating work we have previously done in past campaigns.

We also intend to produce a definitive and powerful set of our famous ‘one-pagers’ on all the key Brexit topics, bringing previous ones up to date and creating new ones.

All of this work will be promoted to the media and we will be using our political connections too.

Some readers will feel jaded and tell us that no matter what we do it will make no difference. We understand this point of view. However our campaigns HAVE made a difference and we expect this one to be our best yet. And anyway we don’t do defeatism here.

We do not have to persuade every member of the public, every MP, and every prospective parliamentary candidate. We only have to persuade some – enough to make a difference to the Brexit climate and outcome.

We hope you will support, and naturally we welcome your comments below as ever.

[ Sources: Internal ] Politicians and journalists can contact us for details, as ever.

Sounds great, and what's needed. I will support you with a donation, and sharing. keep up the excellent work. I like the way you present simple, and clear factsheets.

Chris, above, claims a lot of the May deal can be ignored because it breaches the Vienna Convention on International Treaties. We already submit to EU rules that breach international standards when the EU takes our rightful fishing quotas from us in defiance of Merchant shipping act of 1988 and the NE Atlantic TACs, which are a matter of international law. We would only find ourselves in a similar position with regard to the new EU law (aka May's 'deal') that we do now with regard to implementing the referendum: we would be expecting people who fundamentally agree with the 'deal' (no matter how dishonestly the 'deal' is arrived at and no matter how many international conventions it breaches) to ignore it on our behalf and implement something that we want and they don't. Look how well that expectation has served us over the last three years! If BJ lets us down clearly he won't be the one to ignore a lot of the deal. Then it is only a matter of time before The Brexit Party comes to power. At that point we might have someone who will ignore vast sections of May's abomination of a deal, look closely at the legality of our continued stay in the EU past March 29th (Tilbrook) and seek all the little loopholes and clauses that our present contingency of MPs has so roundly ignored. Perhaps they would be willing to seek international clarity on the legality of May's 'deal', especially if it left NI with no representation at the EU table of faux democracy. It isn't over if BJ signs an appalling abomination of a deal but it does mean we've got years of fight left ahead of us, years of paying and it will be more difficult to leave than ever. I would imagine that after Brexit the EU will take an axe to Article 50 because they won't want anyone else to try jumping ship.

Please do URGENT exposure of the Elephant in the EU/UK Room! Cameron & Osborne gave false denials of UK 's massive liabilities to any Euro failure, specifically claiming that we are not signatories to the Euro Stability Treaty and the proposed Euro Reset mechanism, requiring repayment of €1 trillion minimum. Euro debts, all true, but ignoring we can be dumped billions of this ( maybe €400-500 billion) under Lisbon Treaty catch all clauses, as the Euro has already destroyed most Euro member economies, and thus their ability to pay their fair share of this massive Euro debt. EU meanwhile has kept us locked in to this joint & several liability by Treaty stealth clauses in May's ((actually Frau Weyand's) Toxic Withdrawal Treaty, and will never allow Boris , or any future PM, to remove it !

it seams like the remainders are all fighting for there seat on the titanic. European union is sinking and thy are totally blind to that FACT.