“Let’s be honest with our voters at home. This process is a sham.” 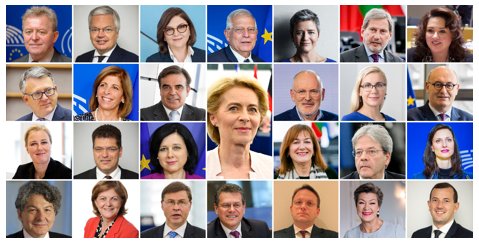 As we predicted early yesterday morning, the EU Parliament has now rubber-stamped the appointment of the new German-led EU Commission which - in just three days’ time - will take over from the previous administration led by Jean-Claude Juncker.

What we were not expecting was a bravura performance by Brexit Party MEP Claire Fox, who gave a short speech in which she slammed both the chaotic selection process and the democratic legitimacy of the new EU Commission.

“This parliament is no more than a faux democratic charade used to give a veneer of legitimacy to an illegitimate decision making process.”

Speaking to Brexit Facts4EU.Org after her speech, Claire Fox told us:

“It was my first time speaking in front of a full chamber and given the occasion of the Commission's vote, I think the parliament were expecting a more procedural and welcoming statement, not one of outright hostility to the undemocratic process that selected the Commission.

“The irony was that despite being heckled and booed throughout, I was originally trying to appeal collegiately to my fellow MEPs to be honest with the voters about the democratic deficit. This obviously changed - along with my tone - once I realised that to the ears of the parliament, my statement amounted to heresy.”

During her first major speech to the EU Parliament, Ms Fox delivered a devastating indictment of what she referred to as “a thoroughly anti-democratic imposition of top down power at Commission level.”

Below we present a video of Claire Fox’s two-minute speech, together with a transcript so that readers can hear what was drowned out.

“My fellow MEPs, let’s be honest with our voters at home. This process is a sham.

Colleagues we are being used as a stage army, marched out today to rubber stamp a thoroughly anti-democratic imposition of top-down power at Commission level.

This parliament is no more than a faux democratic charade used to give a veneer of legitimacy to an illegitimate decision-making process.

We may salve our consciences by rejecting a few bad eggs at bogus commission hearings, but the truth is all we can do is accept or reject from a bunch of pre-selected candidates with no real choice.

This hypocrisy is summed up for me by their gigantic poster of Ursula von der Leyen outside the parliament in Brussels. 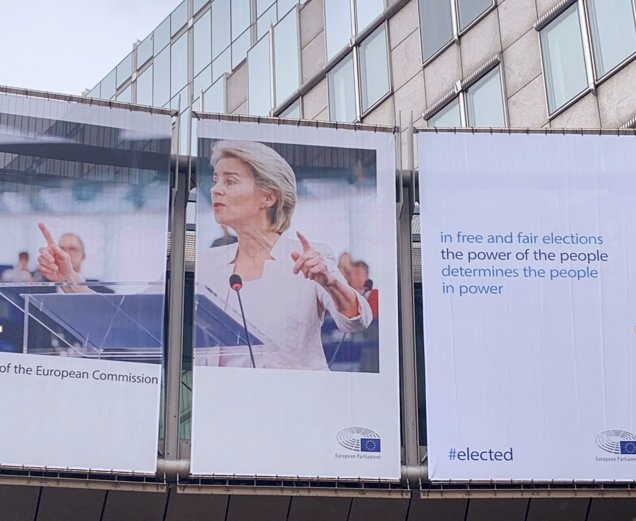 It is frankly distasteful and Orwellian propaganda. It reads:

“In fair and free elections, the power of the people determines the people in power.”

“That is true in national democracies but it is a flagrant lie, fake news, and disinformation in relation to the Commission.

Mrs von der Leyen herself was not elevated to her position of power due to people power. The only power on display in her election was a behind the scenes cabal who pushed her forward as a last minute compromise candidate.

From the Commission’s ambitions for a green new deal, for deeper monetary integration, or austerity, or the appointment of Josep Borrell [new de facto EU Foreign Secretary – Ed.] who endorses qualified majority voting on foreign policy that strips nation states of their own foreign policy.

This federalism steals power from the people and is a naked power grab from the Demos to technocrats in the Commission, and we’re expected to nod it through.

In the UK we’re mid general election. Voters will directly vote on who they loan their authority to.

Yet that national popular sovereignty that treats workers and bosses as equals at the ballet box means voters are the masters and politicians are the public servants.”

How the EU Parliament voted

A total of 461 MEPs voted in favour of the new Commission out of a total of 747 MEPs eligible to vote. 157 MEPs voted against and 89 abstained. 40 MEPs clearly decided that there was little point even turning up.

Whilst the UK Parliament publishes the voting record of each MP within about an hour of each vote, we are still waiting for the EU Parliament to publish the list of MEPs voting for or against the Commission yesterday. Sadly this was a secret ballot, so we will never be able to tell readers how their British MEPs voted.

Ms Fox was allowed just two minutes to speak. Despite being the Brexit Party being the largest single party in the entire EU Parliament, it is not allowed the six minutes allotted to the leaders of the political groupings of other countries. Ms Fox was therefore allocated the two minutes given to selected individual MEPs.

In the very short time available to her, Claire Fox delivered a powerful indictment of the sclerotic nature of the EU and its processes for appointing those who govern it.

Her message was deeply unpopular with the majority of the overpaid MEPs in the hemisphere that is the EU Parliament, but we are very pleased that someone stood up and spoke truth to power.

Yesterday morning we published an article about the events which were due to unfold.

The EU Commission has quasi-governmental powers. Yesterday it was ‘elected’ for a five year term. There is not one word about this in the BBC headlines this morning. We looked at World News, then at UK News. Nothing.

The vast majority of the British public who rely on the state-funded broadcaster will therefore know nothing about yesterday’s events.

Within her allotted two minutes, Ms Fox raised the issue of the Orwellian 1984-style enormous poster of the new EU Commission President, Ursula von der Leyen, which assaults MEPs as they arrive to work in Brussels each day. Above we have shown a photo of this.

We really would like to know how this could possibly have been authorised. When it was made, Ursula von der Leyen’s Commission had not even been approved.

Finally, if you would like us to keep researching and publishing daily, we really do need your help please. Quick and secure donation methods are below. We don’t have plush London offices, we don’t have secretaries, and we don’t have corporate backers. We only have you. Please help to keep us going if you can. Thank you.

[ Sources: Claire Fox MEP | EU Parliament ] Politicians and journalists can contact us for details, as ever.

Excellent speech and thank heavens for people like Claire Fox who say it as it is.
Sadly though even if we leave I fear the civil service and other EU extremist shills within Britain will go completely nuts in their attempts to bring about their utopian nightmare.

We cannot leave this undemocratic organisation soon enough.
Claire Fox mentioned the Commission’s ambitions for a green new deal.
It is in the Party Manifestos for our General Election.

Great speech Claire!! You were speaking for millions.

It was a great speech - and great article here too. I bet the people of Brussels who see this poster have no idea whatsoever how many people were on the ballot paper for UvdL, nor how their new Commissioners were selected and approved.

Great speech. Shame the time allowed was fixed.
There must be a way the BBC can be made to report these shenanigans. Without this information nationally shown we can not form an educated opinion as to the need to leave the EU.

Comment 5, Wes L, no way will you get such reported by the BBC, they are partially funded by the the EU! You can look at Brexbox and any non-msm news outlet and utube and listen to a lot of these speeches. One does not need ITV or BBC to know the news!

I have a feeling that in a few years' time we will be seeing Ursula in her Field Marshall's uniform reviewing the EU army marching past as she takes the salute!
Now where would an appropriate place be for that; have the EU got anywhere as suitable as Red Square in Moscow.
I have made a small donation today.

Have you made Andrew Neil aware of this farce? It needs one of his now infamous interviews to expose this sham. The sooner we leave the corrupt EU the better