VIDEOS: The 12 words from Boris which changed Nigel’s mind 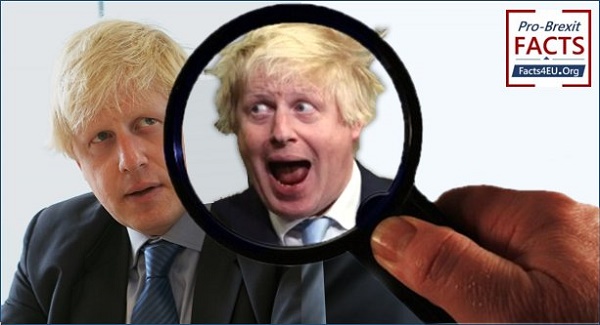 Brexit Facts4EU.Org shows you Boris, Nigel, and what the Withdrawal Agreement says

Here are those 12 words

“We will not extend the transition period beyond the end of 2020.”

Mr Johnson’s full words surrounding this were as follows: “We can get a fantastic new free trade deal agreement with the EU by the end of 2020. And we will not extend the transition period beyond the end of 2020. There’s absolutely no need to do that.”

Here is the video:-

The great new deal we've done with our European friends takes us out of the EU in January. Let’s build a new relationship based on free trade not political alignment. pic.twitter.com/I9KB6QxZK0

And here is Nigel Farage’s response the following day

On Monday 11 November, Nigel Farage gave a speech at a Brexit Party rally in Sedgefield at which he said:

The 'concession' which changed the Brexit Party

“He did make some concessions last night. He did say we’d be leaving at the end of December [2020 – Ed.]. Now, now, he has said that before. You know: ‘do or die’, ‘die in a ditch’. So we’ve got to be careful about promises that get made during election time.”

Here is the video: (The relevant part starts at 46 mins 30 seconds)

I’m speaking live from Sedgefield on my final campaign stop of the day. https://t.co/LhUEUx9o1z

Mr Farage went on to say that the Brexit Party would be standing down in all 317 Conservative-held seats.

What does the Withdrawal Agreement say about extending the Transition Period?

Any extension of the Transition Period must comply with Article 132 of the Withdrawal Agreement. Here is the relevant paragraph:-

Extension of the transition period

1. Notwithstanding Article 126, the Joint Committee may, before 1 July 2020, adopt a single decision extending the transition period for up to 1 or 2 years.”

It is absolutely clear that any decision to extend the Transition Period must be agreed by both parties by 30 June 2020. If the Prime Minister sticks to his pledge that the UK will ‘leave’ the EU by 31 Jan 2020 when the current extension runs out, then this gives the Prime Minister a window of just five months to be sure of agreeing a free trade agreement with the EU by 31 December 2020.

If Mr Johnson is not sure on 30 June that a free trade deal can be agreed by year end, and if he does not request a further extension, then the UK will exit the EU on WTO terms on 31 December next year.

But what then happens to the Withdrawal Agreement?

The Withdrawal Agreement is NOT a trade agreement. It defines the terms of the UK’s exit and it stipulates the EU’s requirements and laws governing the UK – many of which will last long after the UK has actually left.

In essence, the EU – in concert with the Remainer PM Theresa May and her Remainer civil servants – specified the terms on which the EU would allow the United Kingdom to exit the EU.

In order for Mr Johnson to abide by his latest pledge to ‘Get Brexit Done’ (and assuming he wins the election) he will have to sign the EU Withdrawal Agreement by 31 January 2020. Only the attached Protocol on Northern Ireland was changed, aside from two minor changes in the WA which had to be made because of the revised NI Protocol.

All the other colony-status provisions of the WA are exactly as they were when Theresa May agreed them.

There is much we could say about the facts above. Sadly our acute lack of financial resources mean that our observations will have to wait until tomorrow.

If you are one of the many thousands who read us every day, and if you wish us to be a powerful voice for Brexit, please make a donation today using the quick and secure payment methods below.

If every single reader gave just £5 today, we could make it through the election and do so much for the Brexit cause.

[ Sources: Twitter: Boris Johnson and Nigel Farage official accounts | EU Commission ] Politicians and journalists can contact us for details, as ever.

The Conservative Party is not wholeheartedly behind the PM and Brexit. Many elements plus the Media are pro-EU.
The pro-Brexit groups must put pressure on the Conservatives to stand down in Constituencies where they have never won, and then support the Brexit Party candidate. Nigel Farage and the BP have done their bit for the Country.
Clarification: The Withdrawal Agreement has yet to be ratified.

In a North Country Labour Constituency that percentage wise voted to leave, a tricky question for their candidate - What is Labour policy on Brexit?
The Truth: Labour's position had been to negotiate a new Brexit deal with the EU and then put it to the public for a second referendum within six months of being prime minister if he wins the general election.
The party was planning to vote among members to decide whether they would campaign for the new deal or to remain, something which Jeremy Corbyn has not been clear about his own voting intentions on.
However other senior Labour members like John McDonnell, Keir Starmer and Emily Thornberry have said they would back Remain no matter what.
Now more than 50 Labour candidates, including MPs seeking re-election, have confirmed they will also campaign in favour of remaining in the EU.

OT. Why on earth do people keep referring to the European Union as 'our friends' and partners' when it is, quite transparently, neither?

Listen carefully, I will say this only once - NEVER TRUST A TORY!!

Yes, madness. On the one hand Johnson is telling the Remain side of his party that he will sign May's traitorous Withdrawal Agreement; and at the same time he is implying to Leavers that, once having signed the Withdrawal Agreement, the Free Trade negotiations will likely fail to be completed by end of 2020, and he will exit then on WTO terms. Totally duplicitous.
Of course, better to never sign the Withdrawal Agreement in the first place.
The smaller the Conservative majority, and the bigger The Brexit Party block vote, the more likely that that Withdrawal Agreement will never be signed.
Theo Usherwood makes a similar analysis: https://www.youtube.com/wat...
So, if you are lucky enough to have a Brexit Party candidate, vote for them. And, as Barbara reminds us, NEVER TRUST A TORY!!

No. 3 - totally agree. I cringe when I hear our politicians referring to the EU Mafia as 'our friends'. Stop it right now. No one is convinced!
As for Nigel Farage being asked to withdraw candidates. This is only because the Tories fear being ousted by the Brexit Party. Because this Election was going to be THE TIME for the Brexit Party to do really, really well. That is why! I would say this to Nigel Farage: Withdraw your offer (it happens all the time in politics) AND demand that the Tory Party withdraw large numbers of their Candidates to pave the way for a Brexit Party Victory. How does that sound to you, Mr. Boris Johnson?

Let us be quite clear-The EU dictatorship could not be built with a strong Britain opposing it. Therefore Britain had to be destroyed economically, politically, socially and militarily. They’re about two thirds the way there. That is why the 120,000 EU regulations are only enforced in Britain. Over the last three decades perhaps 30,000 pro-EU people have been moved up into all positions of government power; anti-eu people have in the main been excluded; a majority of pro-EU MP’s of all parties were carefully selected with the party list system, which ensured the 138 majority for the sixth and final treaty abolishing our nation, the Lisbon Treaty, which sadly our Queen signed on the 19th June 2008, and which came into force on 1st January 2009.The Lisbon Treaty, if you read it, creates a three tier politburo dictatorship on the soviet model, with a sham Parliament initially in Brussels. So it should be of no surprise that the Press didn’t tell us, that our nation no longer exists, and that Westminster signed away the majority of its power some time ago.Propagandists of political correctness tell us that 'hate' is the worst crime of all. But a patriotic Brit would have to be wrong in the head not to hate the political class for what they are doing to Britain right now. At the heart of all evil regimes, regardless of what they call themselves, lies the desire to destroy everything good in Western tradition and push everything rotten to its extreme-If you question such a lack of taxonomic discrimination, consider those around the world who hail Jeremy Corbyn's ascent. For goodness sake we have to leave this putrid offensive mess and leave without any deal-freedom is what matters, not subjugation, as our Prime Minister appears to be advocating.

If the Tories had done a good job with BREXIT in the first place, taken a hard nosed negotiating stance with EU and we'd left on 29th March with a mutually beneficial agreement on our withdrawal and future relations including an FTA, the Brexit Party wouldn't exist today, so I think the Tories have some brass neck complaining about the BP taking their votes. I planned to vote for the BP, but that option has now gone, so I'm now I'm looking forward to the Tory candidate knocking on my door. He is going to have to explain to me why exactly he deserves my vote! Otherwise I will spoil my paper or vote for a minor party like the English Democrats or Monster Raving Loonies!

Paul A - you are so right!
What's more than irritating is that we will GIVE the EU +£39 billion which could be spent on our fellow citizens in the UK

Comment 7, Tarien.
At last someone things exactly as I do I could not put the current situation better if I tried. Thank you.
I despair at the insanity of the political class.