‘Will everyone please just forget about the Backstop?’ 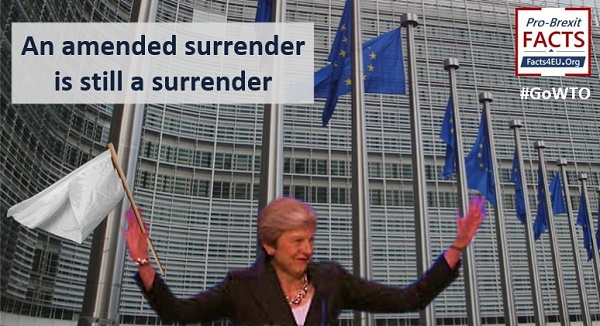 For what seems like forever, MPs have been obsessing about one particular aspect of Mrs May’s ‘Withdrawal Agreement’ – the Northern Ireland Backstop. They shouldn’t. It’s just one of many issues but it has become a talisman and now endangers a ‘start again’ approach to Brexit negotiations.

Backdrop to the Backstop

In the run-up to the third and last of Mrs May’s unsuccessful attempts to railroad her disastrous ‘Withdrawal Agreement’ through the Commons, it became clear that even members of the ‘European Research Group’ (ERG) of Brexit-backing Conservative MPs were considering voting for May’s surrender treaty (our description).

The Government and its whips exerted huge pressure on pro-Brexit MPs, and even suggested that the Backstop could be renegotiated or abrogated in some way after the Agreement was signed. They did so because the Backstop had become the last stand for many Brexiteer MPs.

In the end, our predictions that many ERG members would cave in ahead of the vote were correct. A large number of pro-Brexit and ERG members did in fact give in and vote for the Withdrawal Agreement on its third presentation, regardless of the presence of the Backstop. These included Boris Johnson, likely future Prime Minister, and the Chairman of the ERG, Jacob Rees-Mogg.

Back to the Backstop – and Boris

Boris Johnson has said a great deal about Brexit during the Tory leadership campaign. He has mentioned the Backstop many times.

Here’s an example from just over a week ago of what Boris Johnson said on the Backstop:-

Will everyone please just forget about the Backstop?

Mrs May’s ‘Withdrawal Agreement’ is a totally unacceptable treaty in more ways than it is possible to list in one short article. Whilst the Backstop provisions are so bad that they must be rejected out of hand, Brexit Facts4EU.Org has tried to stress many times that there is so much more that is bad in this proposed treaty. It is dangerous to focus on just one issue.

Put simply, the ‘Withdrawal Agreement’ is an abomination, full stop – even without the Backstop.

Readers will have heard Boris Johnson speaking about Brexit many times in recent weeks. Perhaps one of the stand-out quotes was that the UK would leave the EU on 31 October, “come what may, do or die”. This was encouraging for many people.

The big question is what compromises Mr Johnson might be prepared to make in order to achieve this. (To say nothing of the forthcoming antics of anti-democratic MPs and peers in Parliament, in their attempts to thwart the will of the British people.)

One thing is clear. There can be no compromise over the Withdrawal Agreement. It must be rejected wholesale. It was drafted by the EU, with the complicity of pro-Remain British civil servants, and was agreed by a pro-Remain Prime Minister and pro-Remain Cabinet. It is our opinion that the process leading up to this was one of the most shameful in the history of British politics.

No tinkering with the Northern Ireland Backstop will come anywhere close to negating the other aspects of this appalling surrender treaty. A full ‘hard re-boot’ is required. Three years have been wasted. Now Boris has to deal with what he has in front of him, and this effectively means exiting the EU on the basis of a managed, clean Brexit on WTO terms on 31 Oct 2019.

We wish him well.

In February we summarised just some of the failings of the ‘Withdrawal Agreement’ into one of our famous one-pagers, containing 15 bullet points. Tomorrow we will bring readers an updated version of that article and its accompanying one-page PDF.

It is essential that the scene is set correctly in advance of Boris Johnson becoming Prime Minister. We hope that these articles and the facts we bring to MPs and readers will assist in this.

If you find our work useful, could you please donate something to keep us going? Quick and secure donation methods are below. We rely 100% on public donations and we REALLY need your help. Thank you.

[ Sources: Draft Withdrawal Agreement | Draft Political Declaration | Hansard | Irish Times ] Politicians and journalists can contact us for details, as ever.

Martin Howe QC, on www.lawyersforbritain.org has also been saying the same thing for many months, and I have yet to hear any Remainer refute what he's said.

I wish Mr Johnson would give some justification in his voting for May's surrender treaty.
In the absence of this, it makes all else he tells us seem suspect. I want to believe in him, but this belief is tempered by his voting for it.
Or was he playing some sort of 'long game'?

Theresa May claimed that the Withdrawal Agreement was leaving the EU, She never produced the evidence. Of the many analysis not one could predict the length of time to negotiate and the trading relationship achievable. The 585 page WE presents an interminable task to the UK negotiator.
"Labour accepts the referendum result and a Labour government will put the national interest first." Labour must have decided the WE was not in the national interest !!.
"We will build a close co-operative future relationship with the EU, not as members but as partners." Labour have now given up on the referendum and negotiating their version of Brexit, they just want to remain in the EU.
House of Commons Library - Because leaving the EU is an EU law process, at the national level a ‘no-deal’ Brexit can only be avoided if:
The Government unilaterally revokes Article 50 TEU and stays in the EU; or  Parliament approves and the Government ratifies the Withdrawal Agreement.
Nothing else that the Government or Parliament can do can be relied upon to stop a ‘no-deal’ Brexit on 31 October.

Boris, just like the majority of our political class, fundamentally cares the most about playing the political chess game. We, the public can only hope that somehow at some point his self-interest will be in line with what we voted for - Brexit. As far as I know nobody has voted for a dummy Brexit, that option certainly wasn't on the ballot paper.

May is a remainer, Oily Robbins is a remainer as are the majority the Establishment...the WA was written by them in conjunction with their eu overlords for the express reason of lying to everyone in the UK that we had left the EU whilst we had done no such thing.
By definition therefore, I can only conclude that absolutely NOTHING in the WA is of benefit to the UK.
We aren't withdrawing - we are Leaving, flush the WA along with the MPs who refuse to accept their employers instructions.

I think Boris would be staggeringly stupid to try and resurrect the WA in any form. He would suffer multiple cabinet resignations on Day 1, and probably many defections to the Brexit Party, leading to a General Election.
The way forward is really very simple: Agree to pursue a Canada style FTA with the EU, then invoke GATT Art.24 to allow 2+ years to sort out the details. The incentive for the EU would be both carrot and stick, where the carrot is £39bn and the stick is No Deal. The latter would cause huge damage to the German car industry and the French wine industry.

Off-topic, although still refers to this appalling May Government:
I have just watched ‘Gavin McInnes interviews Tommy Robinson’.
This is essential viewing for anyone concerned about Freedom of Speech, Justice and Democracy in this country.
A truly shocking and disturbing interview.

As an aside, everyone should keep an eye on this anti-democratic commission successor.
As reported on 10th July, 2019, in the D.Express:
"JEAN-CLAUDE JUNCKER’s successor revealed today she wants Britain to scrap Brexit and become part of her arch-federalist plans for the European Union".
I wonder if remoaners have an answer to this foreign interference in British democracy? Probably not, and they'll continue to whine over their cornflakes! Indeed, will remoaning MPs now apologise for trying to cover up what we already knew. THE EU IS A SCAM?
We like individual Continental countries, but don't like unaccountable EU political structures. The UK refuse to be governed by a foreign entity.