Good news : You can put off all your weekend chores!

Thanks to Brexit you are excused from duties

Were you planning to fix the fence panel that has started flapping in the wind? Or were you going to try to do something about that noisy radiator? Or finally clear out that cupboard under the stairs?

Well, you can relax. Brexit Facts4EU.Org gives you special dispensation to put all these chores off for another week.

There is one major, incontrovertible priority for all those who voted to leave the European Union in the Referendum and who wish to see this implemented on 29 March.

Forget rallies preaching to the converted, forget protests outside Parliament, forget tweeting, forget posting on Facebook… you can even forget talking back angrily to the BBC or Sky News whilst watching their anti-Brexit coverage.

Put all these things on hold and do one thing.

We are now entering the final Battle for Brexit

Quite simply, there is nothing you can do which is more important than threatening the livelihood of your MP. This is the only thing which might influence some of these anti-democratic and arrogant MPs, and convince them of the strength of feeling around the country.

Appeals to them to read some actual facts about Brexit won’t work. So many of them stand up in the Commons day after day and repeat what they’re been told, despite not having the barest acquaintance with any of the official facts we’ve been churning out daily for almost three years.

Forget trying to convert them. Hit them where it matters to them : their majorities, and the vote share of their parties.

Letters, surgery visits, calls, and (only in the last resort) emails

Once again we must stress that sending an email to your MP is of limited value. They already receive thousands and it’s mostly their assistants who deal with them. Thousands of letters are much more difficult to overlook.

Below are three options and ideas which you could use. These come from our library of letters and flyers. The best thing of all of course is to go to your MP’s surgery and tell them in person. Or call their constituency office or their number in Parliament. Failing that, please send them one of our letters, or much better still write one of your own. 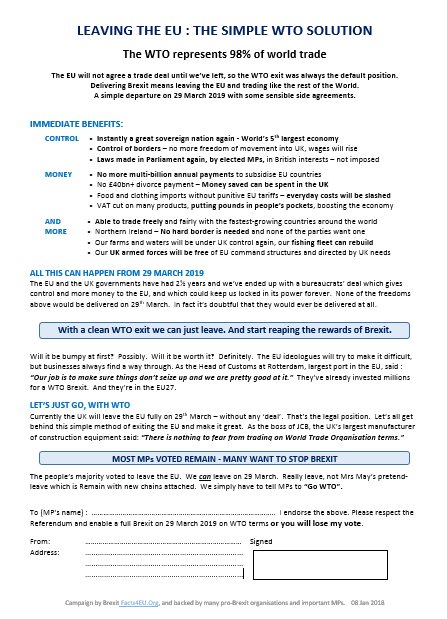 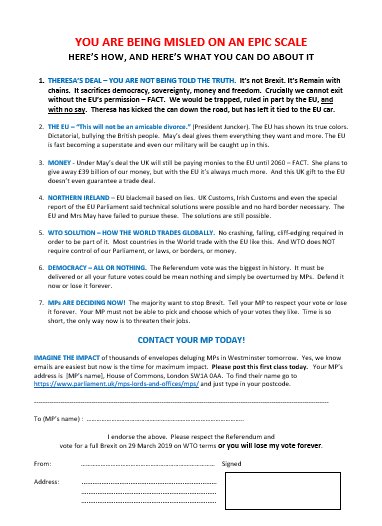 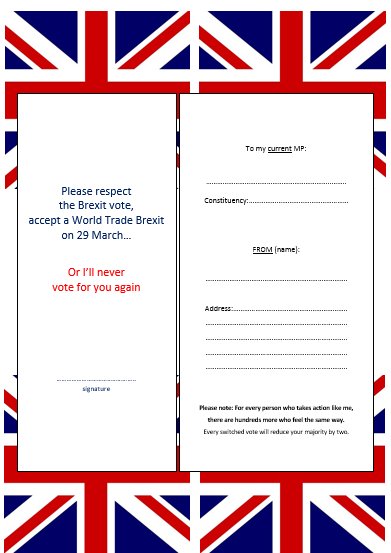 You can download any of these as a PDF by just clicking on it. Please then send it to your MP today.

All the advice has been available in our ‘Brexit Battle Pack’ since last summer. It’s full of information on how you can act to achieve the best possible effect. It even includes advice on how to contact the media when they produce biased reports.

- An anonymous MP who thinks we must delay Brexit

The only thing that can now make a difference

Sadly, Parliament has shown itself to be full of people who don’t respect democracy, despite using it to gain their current employment. Specifically they don’t respect the result of the EU Referendum.

They must now be told to respect the Referendum result, and vote to allow the UK to leave on 29 March on WTO terms with some sensible side agreements on things like citizens’ rights. They must be told that if they do not, you will never vote for them again.

Remain groups have been active in the last two and a half years, while most Leave groups slept. (Brexit Facts4EU.Org were the only group which carried on researching and publishing on 24 June 2016 and every day since.)

Sadly, MPs have been allowed to gain the view that the majority who voted for Leave will not kick up a fuss. Please help us to prove them wrong.

Please also back our #GoWTO public campaign, which is supported by some great MPs and 14 pro-Brexit organisations. Tomorrow we will be announcing the two new Brexit groups who are backing the campaign, as well as MEPs who are now behind this vital initiative.

We rely on public donations to continue. Please give something today if you can. We badly need funds to carry on.

Funnily enough I was going to fix our car's light this weekend. I agree, the WTO campaign is much more important: we have to push back right now and warn our MPs about their undemocratic behaviour. My wife didn't agree with me at first, but we made a deal. (And this is a good one!) So she's going to prepare and post the letters - one from each of us - and I'll fix the car. The negotiation process was quick and straight forward. :)

Not only have I told her (Anne Milton) I will not vote for her, but I have told her that I have joined the Social Democratic Party (who want a WTO Brexit) and that I will actively campaign against her. I have done the sums - and told her that we need only 20,000 votes in her Guildford constituency (that had 34,000 Leave voters) to unseat her. She will have done her own sums and will know her seat is at risk if she betrays the Brexit Vote. Too, I have told her that we will organise Direct Action (a Winter of Discontent) against her in her own Guildford Constituency if she betrays us (I have suggested that we bring the traffic to a standstill by all taking our cars out to join the traffic jams at the most critical points during rush hour - I have many more ideas) - so she knows that her betrayal will result in her directly being blamed for the chaos. And too, when she argues back that she is doing what she believes is best for her country I tell her in no uncertain terms that what she believes is of no relevance, that she has been given a direct order to leave, and any attempt not to do so (she voted Remain and I suspect is a covert 2nd referendum supporter) is to subvert democracy. Even then she does not listen. So I think a day of Direct Action as a shot against her bows might be the next move, just to let her know we exist.
This may give you some other ideas on how to approach your MP.